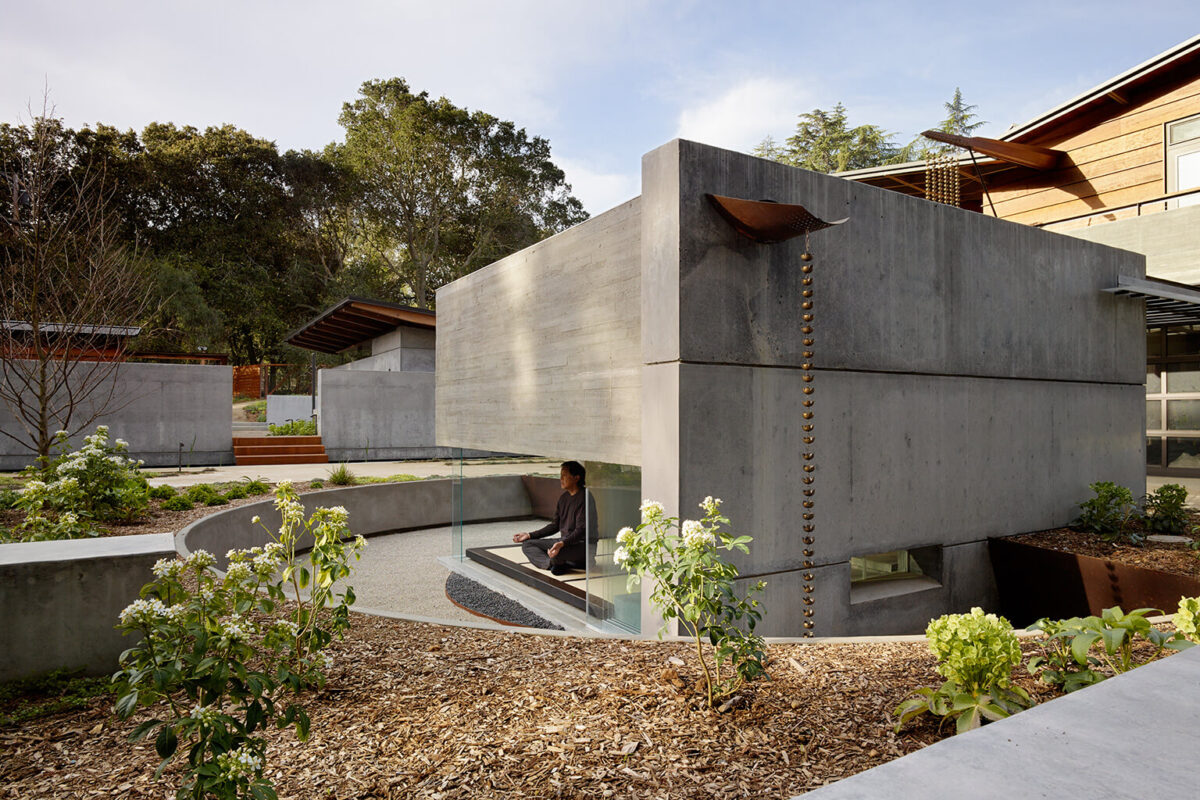 If you ask Fu-Tung Cheng what a favorite snapshot of one of the homes he has designed on the Peninsula might look like, he’d say one that captures the elements of time and balance that go into his work, one that shows the influence of art in his design and also, one taken at dusk.

What is so fascinating about Cheng’s work is that he does not have an architectural background, but an art background. For this reason, he sees things in their materiality and space, rather than in terms of an orientation based solely on function. “Form follows function” is a common architectural adage, and while Cheng respects that, he doesn’t always follow it.
As an artist, Cheng comes from the school of thought that says you make and do things for yourself, and his current staff at Cheng Design reflects that. They are a tiny but mighty team of just four talented people—Cheng, his right-hand architects Ann Kim and John Chan, and architectural designer Frank Lee. Cheng has found that with a small group, they can maintain the intimacy of their work on projects, hiring outside engineers and builders depending on the specific needs of a project.

From 1971-1985, Cheng spent most of his time doing the martial art of Tai Chi. He still teaches Tai Chi at Berkeley Buddhist Monastery a few mornings a week as he’s done for 20 years. (Before that, he taught for 25 years at his late Tai Chi instructor’s own place.) During this time, Cheng was getting by doing handiwork and odd jobs and sleeping in a garage. But he doesn’t tell me that for shock value and he didn’t mind having to do it. He is a man who believes you only need what you need, and nothing more. As Cheng naturally graduated to larger jobs, he had to figure out things on his own—how things worked, some smaller feats of engineering and the like. He found that it interested him to be a problem-solver that way, and regularly offered suggestions to his clients about the routes they might take in approaching whatever home issues came up.

Still, he always wanted to go back to school for a degree in art, which he’d tried for at UC Berkeley. Upon attempting to do that, Cheng found out that he’d had an art degree all along! Because of a fluke administrative issue, his physical degree had gotten lost in the UC shuffle, and he was unaware that he’d had enough credits to fulfill the requirement.

As hard as it is to believe when you look at the magnificent photos of Cheng’s work, there is so much more to this man than his design work. Before college, he occasionally hopped freight trains to get where he needed—even across the country. When in Japan on a year abroad studying Japanese art, at 19 years old, Cheng became the head cook for a Tramp Steamer Cargo Ship that had come into the harbor in Yokohama when their existing chef mysteriously disappeared. Back in Berkeley, Cheng participated in many Vietnam War demonstrations from 1968-1972. He even recalls having a conversation with a neighbor in the Berkeley library. That neighbor went on to be one of Patty Hearst’s kidnappers. Suffice it to say, Cheng’s adventures were never boring.

Though he admitted he was in these demonstrations more than he was in class, Cheng was and is a peaceful man—a meditator—and was glad when those tumultuous times eventually led to the relative tranquility of the ‘70s.

Sometime before 1971, Cheng heard a speech at UC Berkeley by a woman who worked with the Wobblies (international labor union) Movement of the ‘20s and ‘30s. He can’t remember her name, but he remembers the crux of her message, which impacted him immensely. She said that change doesn’t come overnight. Real change requires a sound basis and time—maybe even generations. She was speaking politically, but the point is the same and Cheng felt her saying to him: you are the future. That’s when things really started to change for him.

One day, Cheng was in Monterey Market in Berkeley and saw an ad for a run-down house for sale—complete with a description of the squirrels and raccoons that lived on the property and an admission by the owner that he no longer had the desire to work on the house since the death of his loved one (who Cheng later found out was one of the first deaths attributed to the AIDS epidemic). To this day, he isn’t sure what made him do it, but Cheng unpinned the ad, put it in his pocket and rode his bike to the Neilson Street location.

The owner of the dilapidated home literally ran after Cheng once he realized that he might be interested. The two sat and talked about the mysteries of life and death. Cheng talked about his experiences, and the owner, Warren Nettles Garrick, talked about his departed. Cheng felt moved by the story and drawn in by the place’s potential, and Garrick made it possible for the then-23-year-old to hold the home for $250 as he scrounged up the rest of the $1,500 down payment. (The house was $16,500 in total.) The rest, as they say, is history.

Cheng set out to turn the home around—using all found items. He collected used lumber, salvaged pipes and old fixtures from demolition sites. When he heard that a local high school was closing, he hustled there to salvage the wood from their gym floor. That home became Cheng’s laboratory—where he learned to love recycled items and mixing modern elements with time-melded materials to create a timeless look. He still lives there, in that 1,300-square-foot house, now as a very successful architectural designer who could have a place triple its size. But he will never sell it. His daughter would kill him! (She was actually home-birthed with a midwife in her room there.) Ever the pillar of humility, Cheng wouldn’t reveal the current value of the home, but his smile when I surmised that the return on his $16,500 investment was probably astronomical gave it away.

At this house, Cheng created what would become a staple of his present work—concrete countertops. In this he found a leveling of the playing field, as he calls it. He had affluent hedge-fund clients who could afford a whole lot more who wanted just what he had in his little 10x-4-foot kitchen on Neilson Street. The look had enough of a feel of innovation, but not so much that it felt like a trend. It felt balanced; it has an aesthetic from the heart infused with really interesting construction. Cheng later wrote a book, Concrete Countertops: Design, Forms and Finishes (Taunton Press, 2002) about the conception and implementation of his concrete countertops—a book that continues to enjoy sales today.

It’s often said that architects do their best work after their 50s and 60s. This is because it requires experience. You are dealing with people’s very aspirations and you have to use their money to do it while instilling in them the confidence that you can do it well. You have to be able to keep coming up with things that are new and to accept those that don’t work. Only the tincture of time and experience can give that to you. As far as the style of the homes Cheng is designing now, he draws influence from the art of his studies and travels, and also from his Tai Chi practice. The impact of the latter may not be obvious in the aesthetic of his homes, but the process that then creates the aesthetic certainly is. Some of the main tenets of Tai Chi include patience and resilience. In Cheng’s work, these have been invaluable. In Tai Chi he learned yielding and assertion. To roll with the circumstances–which in architecture and home design are constantly changing–but not to get crushed by them and be able to assert once more. Cheng believes that life was simpler in the past; not as tightly wound. You could survive on much less, and that allowed you the latitude to experiment more within your own life and space. You can see this in his work—and life. So, what’s next for Cheng Design? Cheng dreams of designing a place of spiritual consciousness. A non-religious building that would be a sanctuary of awareness.

Cheng would tell you that in the next chapter at his firm, he would like to focus on the emotional response people have to the spaces he creates. I see this thread in much of his life and work—all the way back to when he bought the Neilson house from its bereaved owner (who Cheng tells me would be in his 80s and whom I’ve urged him to track down for the “full circle” moment of a lifetime) based on an emotional connection he felt in their discussion.

While touring one of Cheng’s homes in the Los Altos Hills recently, he led me to see the sunken meditation room. “Wow,” I exclaimed. “If I had a room like this, meditation would probably be so much easier!” Cheng walked over to me, slowly pressed his finger to my temple and said, “The room is in here.”