Go inside an amazing 1,800-acre ranch in Pescadero that aims to change the way that we farm in America 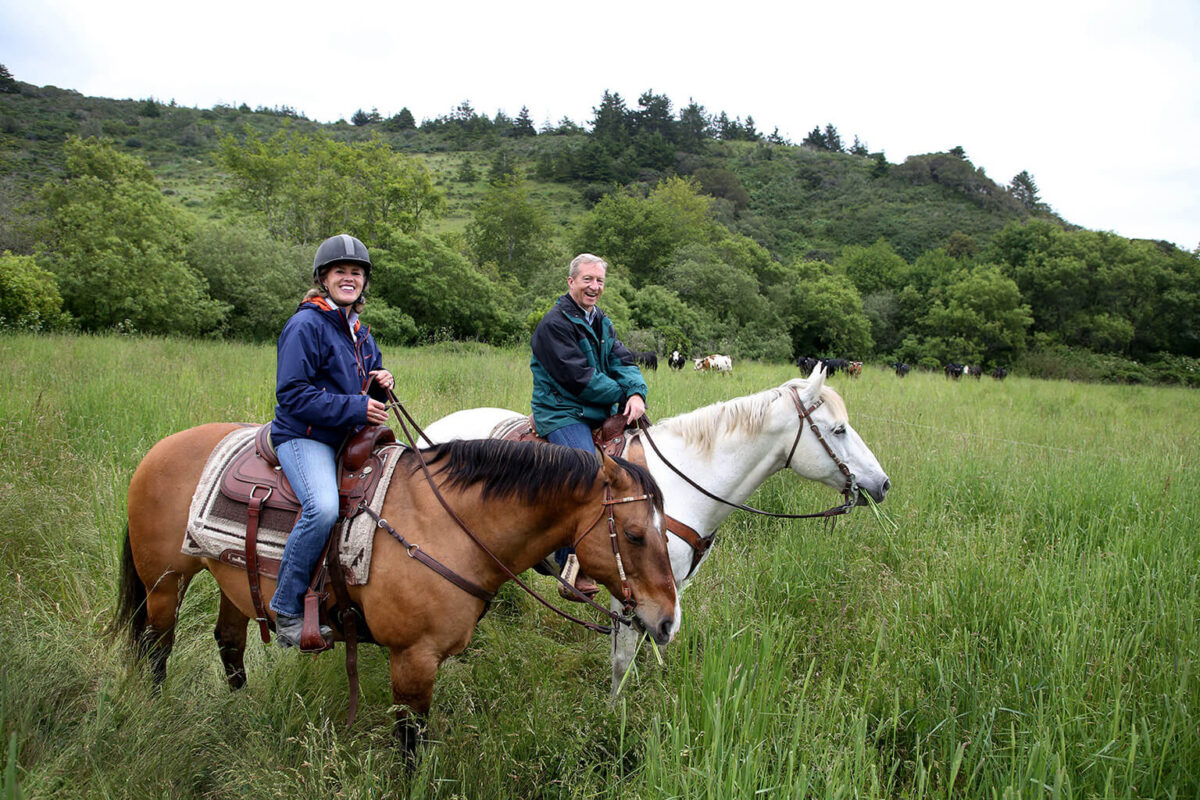 On a brisk Monday, the weekly TomKat Ranch staff meeting starts by remembering old friends. “Marigold the goat has passed on,” Wendy Millet, Ranch Director, says sweetly to the group of flannel- and fleece-clad ranch staff.

Sitting around a big, sturdy table over leftovers from a ranch event the night before, the group hands Wendy’s cell phone, patching in an out-of-town employee, one to the next, offering updates on the particular element of the ranch they represent and specialize in. “The grass is longer than this time last year,” offers a member of the ranch’s Land and Livestock team.

The vibe is casual, comfortable, helpful, healthy and earnest. It truly does feel like a family and one can feel the motivation of a common goal.

You may have heard the names Tom Steyer and Kathryn “Kat” Taylor. Steyer founded the hedge fund Farallon Capital in 1986 before he left in 2012 to focus on environmental and political improvements to the world as he sees it. He is also the founder of NextGen Climate, an environmental nonprofit and political fundraiser. Taylor is the CEO of Beneficial State Bank, a community bank based in Oakland, with the mission to improve social justice and economic well-being while being economically sustainable. The difference between this power couple and others in their echelon? They are undeniably normal and modest. Taylor, tattooed and unfussy, admits that she stands out at “society” events, though she deliberately attends few of them. And for Steyer’s part, he has been known to say that it’s one of the most basic truths that a person can only ever wear one pair of pants and one shirt at a time, and only ever eat three meals in a day. They met on the track at Stanford and went camping for their honeymoon.

What you may not have heard of is TomKat Ranch, the couple’s 1,800-acre ranch in Pescadero, a few miles inland off Highway 1. When a friend of Taylor’s told her about the ranch property in 2002, technology and finance bigwigs were buying up pieces of property in the area left and right to make a profit. If Taylor didn’t buy it, it would likely have become a development with far less noble goals. Team TomKat took action.

The Ranch is meant to be a living testing ground for sustainable ranching. The very committed team looks to nature to inform every part of their landscape management—from the way they raise the beef they sell through LeftCoast GrassFed, to the strategies they have in place to regenerate natural resources; to their true mission to inspire other people to join the cause. Wendy Millet explains that their land management is no longer about creating an environment that is sustainable (which has become a bit of an environmental buzzword with muddled meaning), it’s about making it regenerative. When the ranch was purchased, the soil, water and biodiversity were degraded from past management practices. “We didn’t want to sustain that degraded condition,” she says. “We wanted to restore and regenerate—thus our search and pursuit of regenerative practices.” “We are all connected,” Millet goes on. “You can restore soil by moving grazing animals on the land­—mimicking the way nature has always had grazing animals on the planet. You can look at the microbiology within a cow’s stomach and it can inform how you manage the entire ecosystem.” Millet goes on to explain how the plant material that cows eat is full of cellulose, which is hard to digest, so they rely on bacteria and other organisms in their stomachs to help that digestion process. Without cellulose-digesting bacteria, cows wouldn’t be able to digest plant material all and neither would we. There are so many things to consider in the complex world of nature. One teaspoon of healthy soil has over a billion organisms. These environmental professionals are trying to acknowledge every one of them.

TomKat Ranch is certainly not just another “green” endeavor by people who have the resources to experiment on a large scale; the ranch is using highly detailed, substantive—and at times, complex—science to back up their findings. Along with Point Blue Conservation Science, TomKat runs experiments and monitoring programs to carefully plan out regenerative ranching practices. They experiment with and create all kinds of tools that help land managers to do this more easily.

Something so fascinating about the good work TomKat Ranch is doing is the way it is an extension of the business mentality of nearby Silicon Valley. People come from all over the world to this area and are willing to spend enormous amounts of money on start-up ideas. When those ideas really work, they are replicated in various forms—and even modified for various industries—here and around the world. Such is the case with TomKat, which acts as a sort of environmental incubator…but they are taking it one step further.

Now that Steyer, Taylor, Millet and the rest of the team have found strategies in land management that really work, they are using their resources to show other ranches how to do the same. There is no proprietary technology; they have found programs and tools that have proven effectiveness on their property and because their priority is the earth and not a for-profit, they share their findings regularly through workshops, classes, publications and social media. “I’d like to see regularly that prospective regenerative ranching land managers and lands have the discipline of a healthy, fully functioning supply chain,” says Taylor. “We have the audacious goal of migrating 1 million acres of grassland in California toward regenerative ranching. We learn so much from others doing this work around the world and are eager to share the many benefits.” They want to contribute to the awareness that large, migrating herds, like the cows they are raising, aren’t bad for the conservation movement, but can actually help; ranches can be working landscapes if people understand how animals and land work together. TomKat ranch wants to demonstrate to other ranches and farms—and people—a way of farming, agriculture and food growth that doesn’t damage the environment and moreover, to incite them to follow suit.