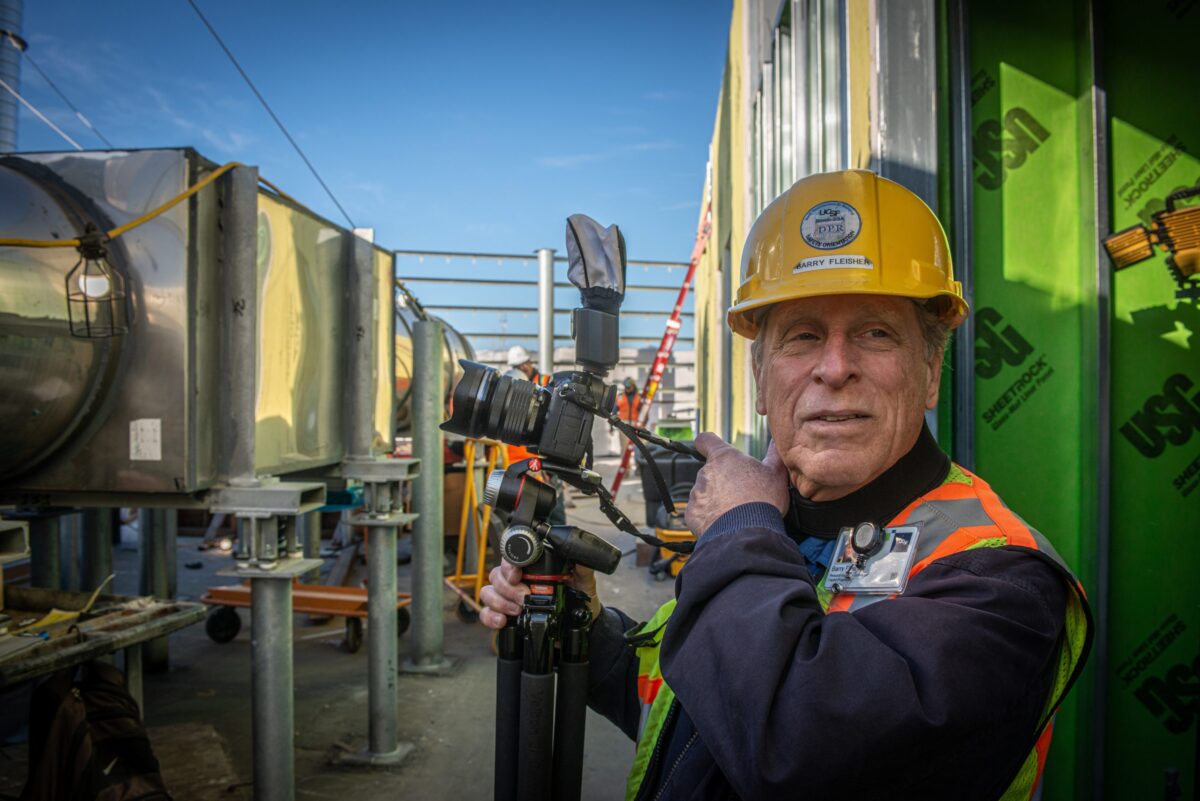 If retirement allows you to become who you were always meant to be, then Barry Fleisher was bound for photography—specifically, he was destined for construction sites where institutions are built from the dirt up and fleeting moments of brilliant minutiae find the circle of his lens.

His subjects appear the same as they would if observed in broad daylight, from the sidewalk, viewed between the checkered breaks in a chain-link fence. However, through Barry’s retina, these workers are celebrated. Their laborious efforts are championed in the black and white. In lieu of color, Barry’s photography is flush with light, shadow and composition.

At a construction site at the new Lucile Packard Children’s Hospital at Stanford a few years ago, a hard-hatted duo peer over blueprints inside the bowels of a dark basement using just a sliver of silvery light showering from above, elevated in the dust to create an angelic spotlight. Another monochrome from Barry shows a welder forming a constellation of sparks that tumble out of frame into a seemingly infinite freefall.

These are the subtle details only a father approaching 80 could observe. How each moment can be momentous. It’s an appreciation borne through time that recognizes the cursory conditions of life sneaking past us. For some, the cranes that hover over the Peninsula are emblems of change, but for Barry, they become new angles to fit within his compositions. Since development on the Peninsula will outlast us all, Barry’s photography offers a refreshing perspective on an overlooked aspect of our daily lives. 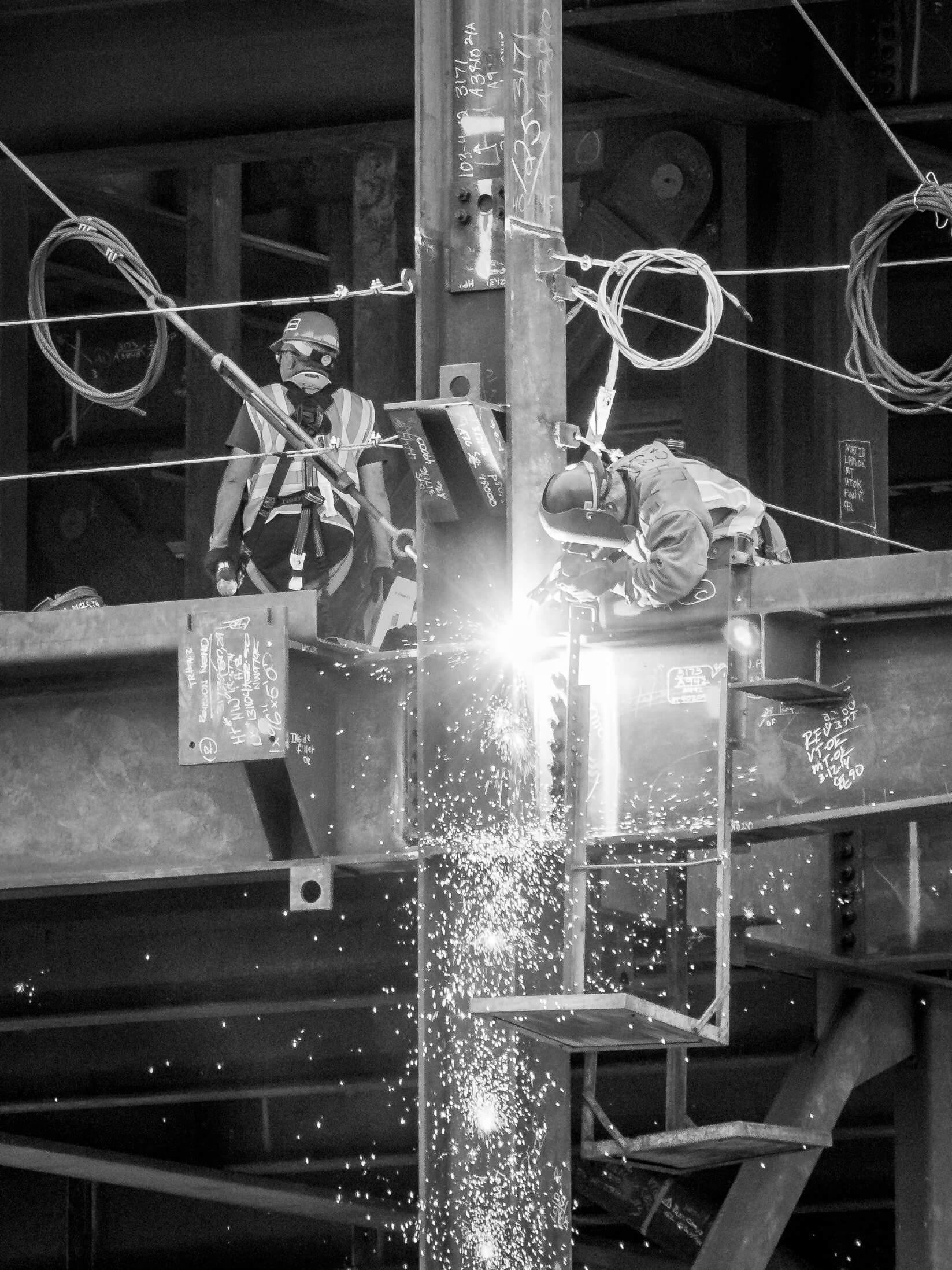 “Why does it appeal to me so much?” Barry rhetorically asks himself about his series on construction workers. He pauses between sips of tea inside his pristine apartment that was recently developed along the southern rim of San Mateo’s Central Park.

On a summer-like February afternoon, Barry’s home is sunny and inviting, with a spacious floor plan, walls adorned in his captivating photography and a fourth floor balcony overlooking (and overhearing) the joyous Central Park playground below.

Sometimes when Barry looks down following a laugh, his celebrity lookalike is Robert Redford (an observation that makes Barry blush). Dressed in his usual garb of a safari shirt with plenty of pockets tucked into a pair of jeans, Barry has an affable demeanor that recalls a winsome family pediatrician—a practical comparison considering that Barry worked in a children’s hospital for most of his career.

But before his career in medicine, Barry began on the ground floor of a family enterprise, one that has continued to fascinate him well past his retirement.

“My family was in construction and my summer jobs were sweeping up after people on the job site. That had been in the background for my whole life,” he says. “I started college as an engineering student—I was going to build things. I have an appreciation for the work. It’s in my blood.”

Barry comes from a deep construction lineage. His father, brother and uncle were in the business. Louis Gordon Meltzer, his mother’s brother, established LG Meltzer in Washington, D.C., during the post-war boom where every two-car garage first needed to be built. Barry was born in Cleveland, Ohio, in 1940 and his father eventually relocated the family to the nation’s capital to join the family business. This was in the mid-1950s as tract houses permeated past the Beltway to give the new middle class a place to call home. Barry’s family was one of them.

Although an invitation was ultimately extended to join the family business, the scholarly and curious Barry chose to build his life elsewhere. He enrolled at Cornell University, first in pursuit of automotive engineering (he appreciates the tactile and technical), but would graduate with a degree in philosophy in 1962, around the same time he purchased his first Nikkormat camera, which he used to focus on landscape photography.

Furthering his education, Barry recalibrated for medicine, a field that fused two of his passions. “It seemed like a good combination of the technical part of things and the humanitarian part of things,” he says. “At least that’s how I constructed it in my mind.” He came out West in 1964 and received his medical degree from Stanford University School of Medicine in 1971. 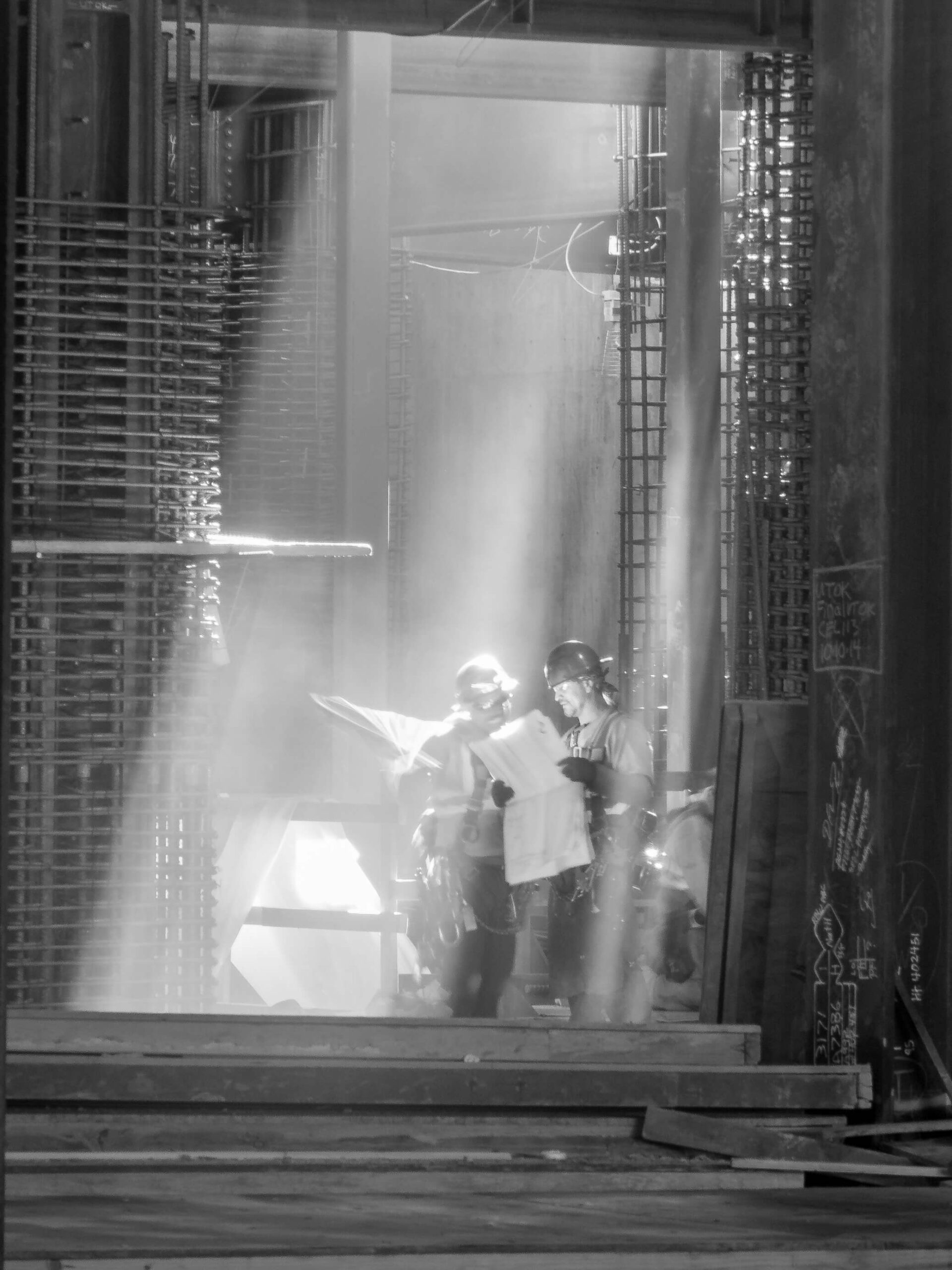 However, it would still be another decade before Barry discovered his medical calling. “It took a long time to settle into what I wanted to do when I ‘grew up,’” he says, accompanied by a heartfelt pair of air quotes. “I didn’t start my newborn intensive care fellowship until I was 40.”

One of his detours was spent as a commissioned officer with the Indian Health Service, a branch of the U.S. Public Health Service. Civic service is important to Barry, who spent his years at Cornell untangling ethics. “I think everybody should put in a year or two early on in their lives to help people in this country who would not otherwise get help,” he says. “It’s got to do with ethics and being a citizen. The problems we have, we can work on.” 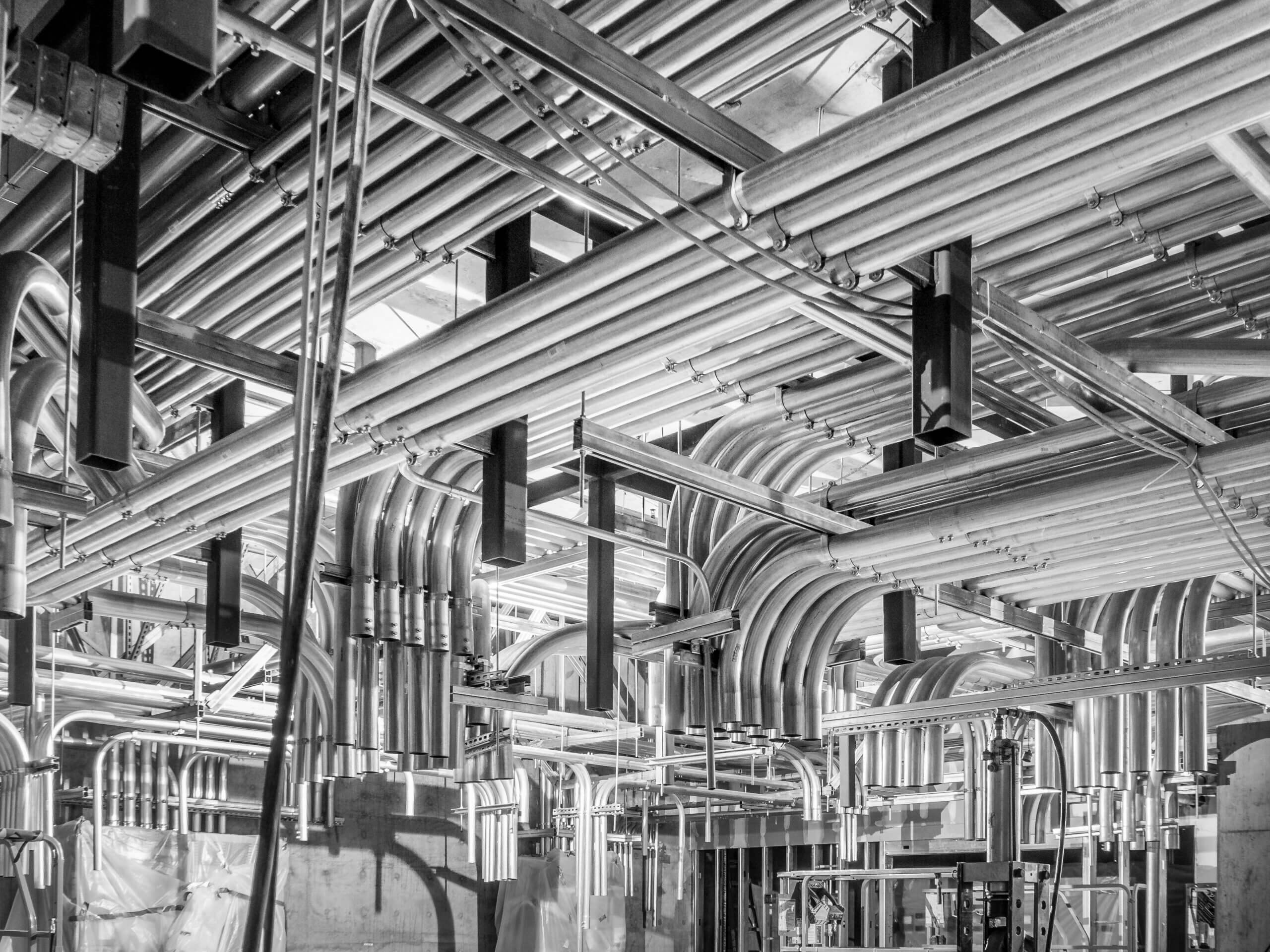 He would go on to join the faculty at Stanford in 1988 where he became the medical director of the Intermediate Intensive Care Nursery. Barry finished his 15-year career as a neonatologist specializing in newborn intensive care at Lucile Packard Children’s Hospital at Stanford. He established or expanded several programs including a community outreach program, the High-Risk Infant Follow-Up Program and the Intermediate Intensive Care Nursery, which he grew from seven beds into 21 beds after his first year through strategic economics.

“My career is building things,” he says with a smile.

He fathered two children, Lisa and Ben, who were raised on the Peninsula and both followed their parents into medicine; Lisa works with the U.S. Agency for International Development in Washington, D.C., where her area of expertise is international health policy and Ben is an EMT, paramedic and RN in Denver. He too has a penchant for photography.

Not long after his retirement in 2003, Barry began taking digital photography courses primarily at College of San Mateo, where he started exploring his interests in street and building photography.

However, six years ago, Barry stumbled onto the unique field that ultimately seized his focus. Parking his car near the SF MOMA one morning before a spell of street photography, he paused to admire the expansion project underway at the museum. He watched as gigantic “building-eating machines” tore into the walls but struggled to find a good vantage point to capture the carnage.

Returning to his then-home in Menlo Park, he found himself retracing his old commute back to Lucile Packard Children’s Hospital, which itself was undergoing a massive expansion project. 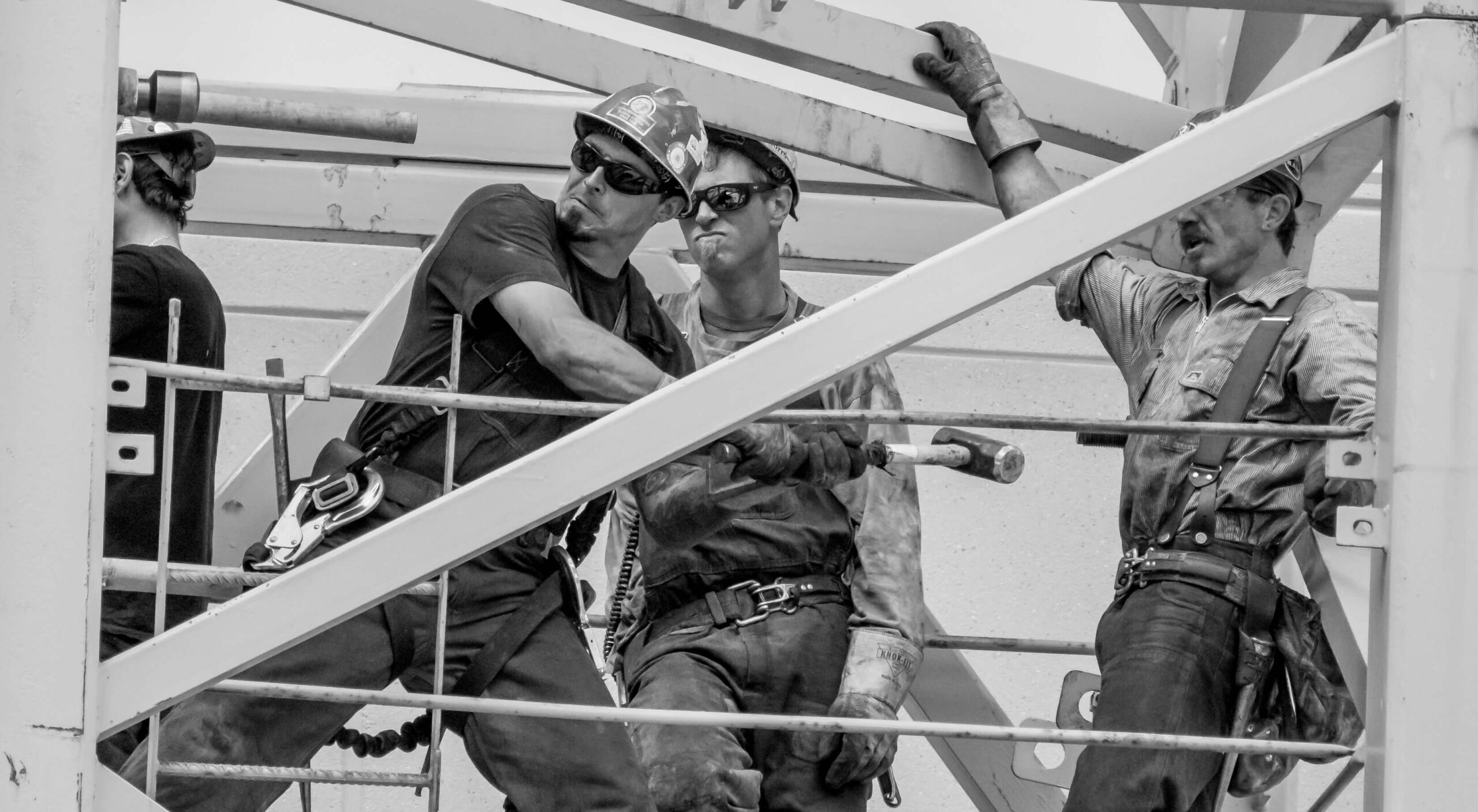 He started small, photographing the perimeters, but his desire to document the entire development process forced his hand to email the contractor and hospital to request permission to properly shoot the scenes. An agreement was hatched: He must always wear safety equipment and have a constant spotter from DPR Construction, the Redwood City-based construction management firm behind the project.

Barry shot the insides and outs of the hospital’s expansion for years until the ribbon-cutting ceremony in November 2017.

“I realized that how I wanted to think about photographs was in the progress of the structure. Here’s what it looked like as a piece of dirt and here it is now. It’s a documentary,” he says. “The second thing that caught my eye was the detail of construction. And the third big piece is the workers. Watching them and realizing, even with machines and robots, how much physical, hard labor goes into this.” 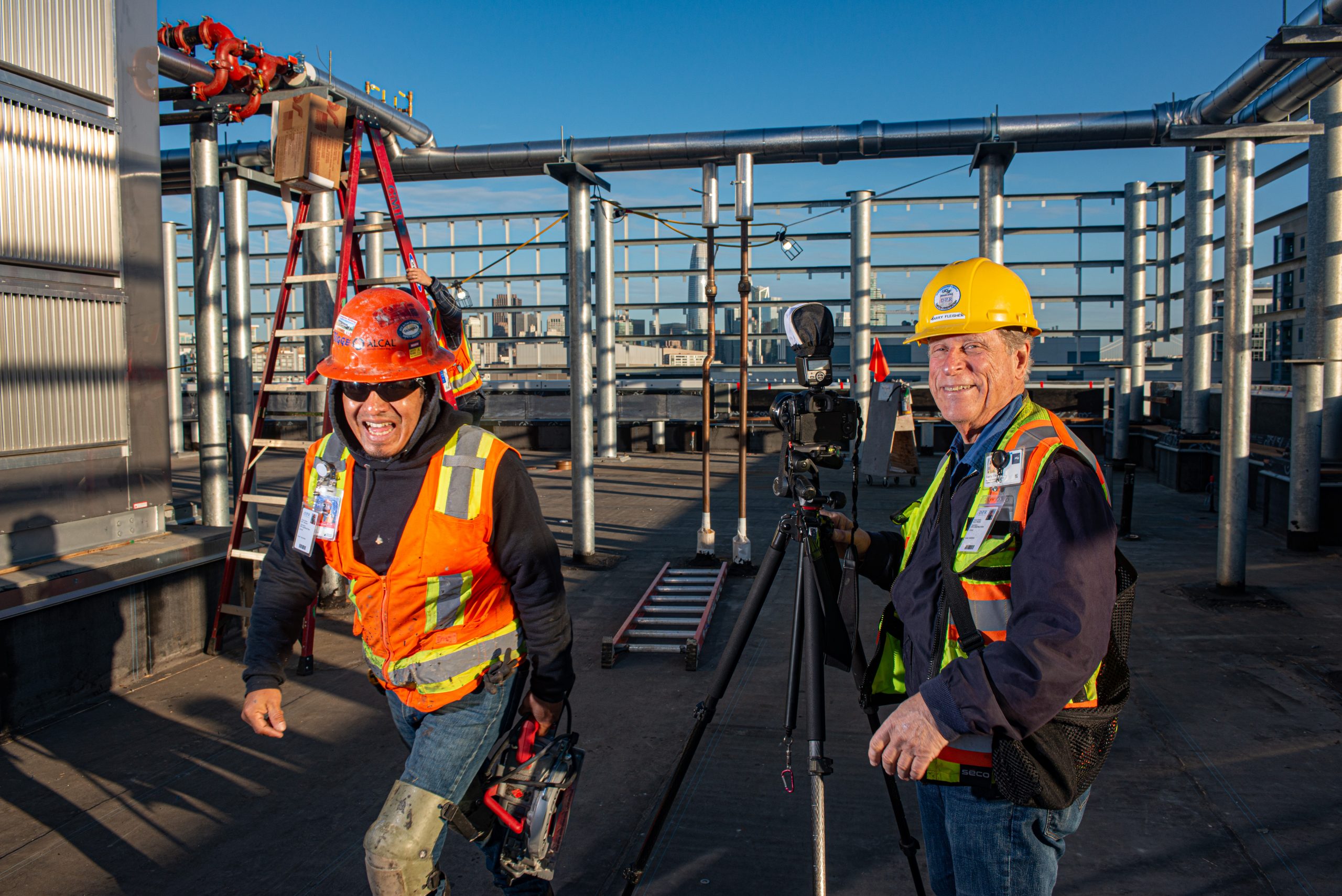 Barry’s photos were turned into a photo essay book that was created in part with his frequent DPR spotter-turned-friend Albert Lee. The two still get together for dinner long after the hospital’s opening and their friendship reflects the respect Barry has for the construction workers and DPR; he continues to work with them, currently documenting a job site at the UCSF Mission Bay Campus.

“I see construction workers as salt-of-the-earth people. I’m trying to think if I’ve ever heard stern words exchanged. What I see are guys (and I say ‘guys’ because it’s mostly guys) having a good time. They’re laughing with each other. They’re working their asses off and it’s difficult and dangerous work. They like that somebody is interested. They appreciate it,” Barry says.

He pauses again, sips from his tea while scanning his memory of the hard hats who’ve become his models and friends.

“One guy named Isiah served as my spotter one morning and he told me how he started out as a cement worker, which is back-breaking work, and worked his way up to safety officer,” Barry says. “I took a photograph of Isiah, who is one of the most dignified persons I’ve ever seen. And that’s not uncommon. There’s a dignity around these guys and the way they work together.”