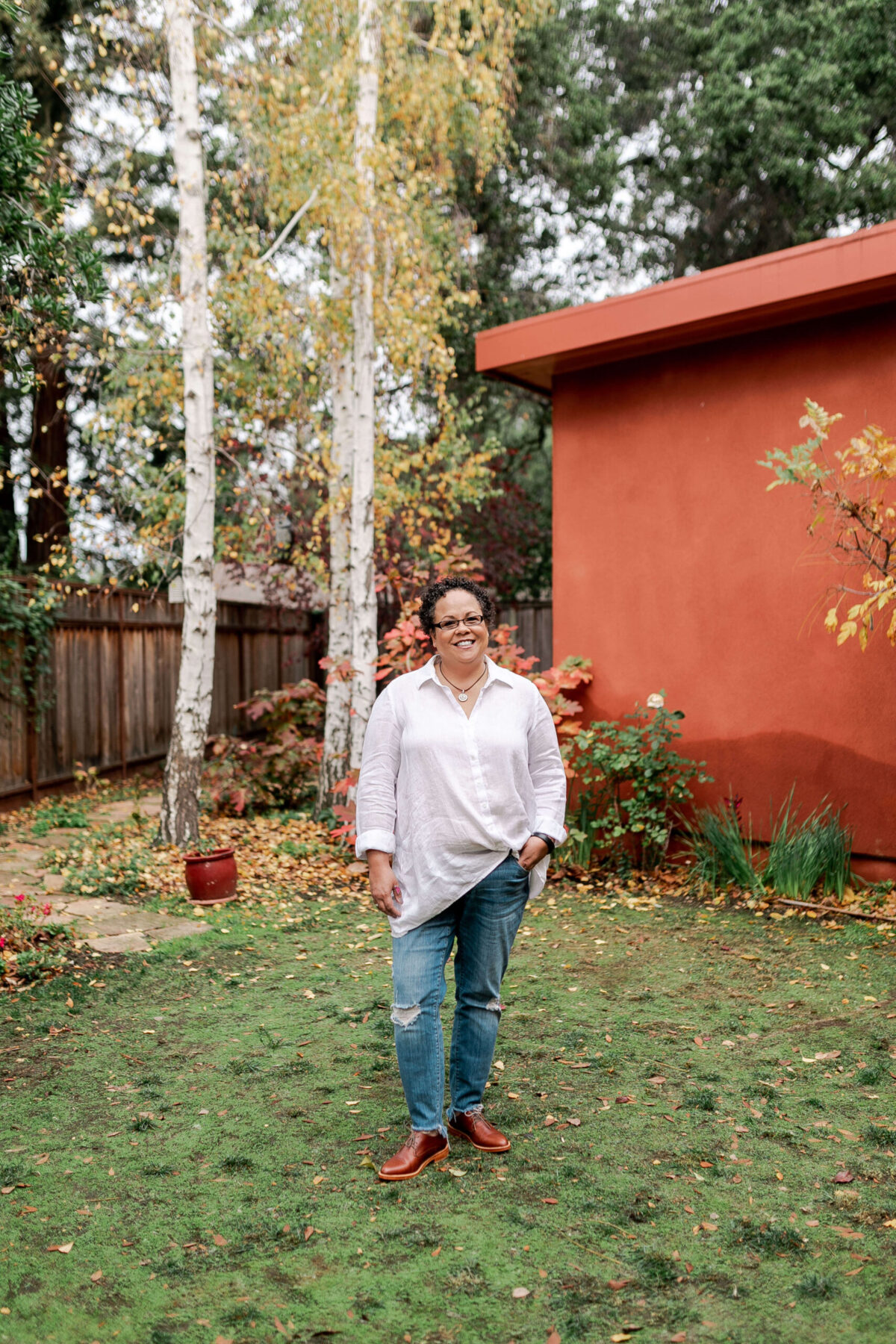 Julie Lythcott-Haims lives for the after-dinner-drinks discussion. The discussion that arises after the formalities are observed, after the small talk is exchanged, after one’s guard is lowered. These intellectual and emotional explorations naturally arise around the firepit in the backyard of Julie’s Palo Alto home. She likes to ask people who they are becoming—not in relation to a title or income—but what they are working on within themselves. As the firewood fuels the nighttime flame, the burning embers fuel introspection. Julie believes that beneath people’s performative façades, all individuals are a work in progress.

“We have had some of the most profound conversations around that firepit,” she fondly recollects. “That kind of interaction is the juiciest, most delicious form of human interaction I know.”

Julie—author of the 21st-century parenting manifesto and New York Times bestseller How to Raise an Adult and her award-winning memoir Real American—hopes that the honesty she unveils in her April 2021 release, Your Turn: How to Be an Adult, will inspire younger readers to dig deep in seeking their own personal and professional happiness. “Your Turn needed me to be vulnerable about things that I’ve done or things that I had happen to me,” she says. “There is a strength embedded in the tougher life experiences.”

Functioning as a sequel to How to Raise an Adult, Julie writes as a peer to the helicopter-parented Millennials and Gen Zers, who inspired her initial book. Written with a self-help structure, Your Turn is as much a cultural commentary on the modern American adult as it is a guide for navigating life’s inevitable hurdles. By recounting her own struggles, plus sharing profiles of acquaintances, Julie addresses a plethora of “adulting” challenges: career angst, personal identity issues, financial security, and more.

“In some ways it’s me trying to be a dean on paper,” Julie says, alluding to her 14 years working as a Stanford undergraduate administrator and advisor. “I want readers to feel like: ‘She gets me. She is thinking about me. She cares about me.’” 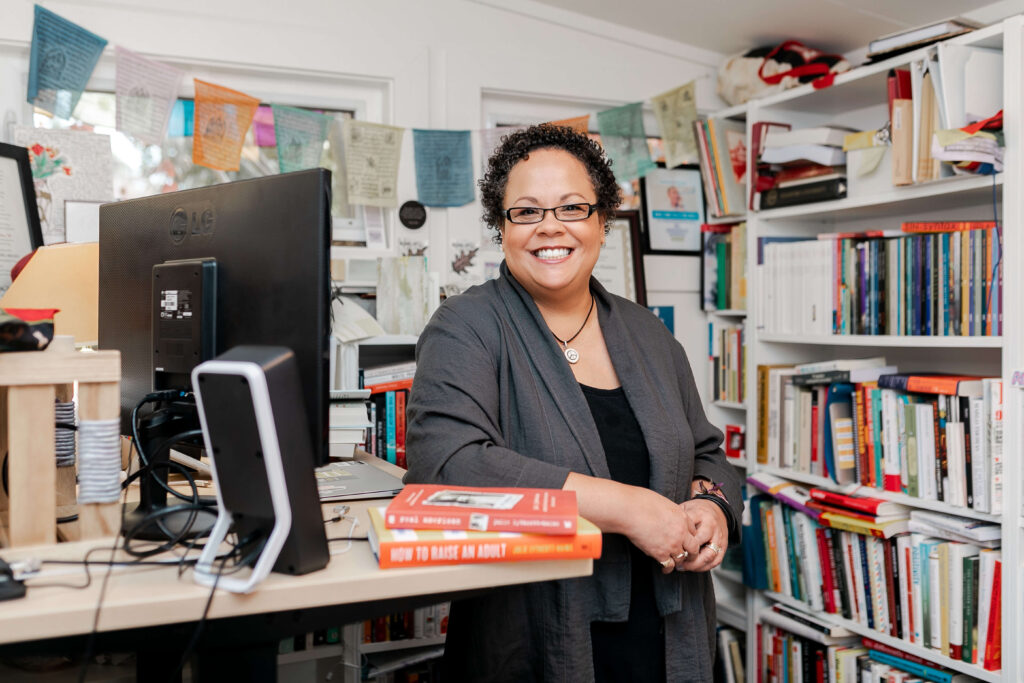 At Stanford, Julie observed the effects of what she calls overparenting: students with elite intellectual abilities psychologically crumbling under the weight of adulthood. She saw a revolving door of students visiting her office with confidence-crushing crises over issues that would have been viewed as minor setbacks to previous generations of students.

Based on the students she mentored and by analyzing her own overparenting tendencies, Julie realized that childhood had become too precious and curated: “A lot of activities, a lot of homework—but not a lot of watching adults do the work of living.” Your Turn is Julie’s attempt to remedy that, or as she puts it, “You grew up without having to deal with this stuff—here’s how I have dealt with it and here’s how others I know have dealt with it.”

Julie certainly encountered challenges in her own childhood. She is biracial and grew up with upper-middle class status—an uncommon mixture for the 1970s and ’80s. Her family constantly moved towns based on her prominent father’s medical appointments, including positions with the Carter administration.

Because of these complicating factors, Julie’s sense of belonging eluded her. But she’s grateful to her supportive parents for giving her the leeway to wrestle with tribulations. Instead of coddling her, they also assigned Julie regular chores. By the time she reached adulthood, Julie felt adequately prepared for life’s numerous curveballs.

“I mean, there were plenty of things that I didn’t know how to do,” Julie says of her first few years out of the parental nest. “But my mindset was, ‘Oh s**t! I’ve got to figure this out…This is on me.’”

In chapter five of Your Turn, Julie describes a critical turning point in her own journey. About a year after moving out to Menlo Park from Massachusetts, she faced a personal existential crisis. Here she was, a 29-year-old Harvard Law School graduate. She worked at a prestigious Silicon Valley law firm. She received a generous salary. She was happily married to her husband, Dan. They were renting a house for the first time. Any outside observer would say, “She’s done everything right.”

But inside, Julie felt deeply dissatisfied with her occupation and the lifestyle choices it forced her to make. Her suppressed feelings finally crescendoed one day as she broke down crying on her backdoor stoop. By society’s standards, Julie was a successful corporate litigator, yet this career choice clashed with her personal passions.

As a child, Julie says she always wanted to help people feel belonging because she knew what it was like to feel lonely, to not “fit into a box.” The emotional epiphany on her stoop galvanized her to return to that mission. Her risky professional pivot paid off when she discovered a meaningful calling in university administration—helping students feel genuinely connected to campus.

She recognizes that emerging adults today live under different circumstances than she did, and she made a conscious effort in Your Turn to wrestle with the challenges that 18- to 35-year-olds care about. For example, she devotes an entire chapter to mental health and wellness—confronting it rather than burying the discussion in a footnote. She also views Your Turn as an example of how to compose nonfiction in an anti-racist and inclusive manner.

“I do try to be deeply observant of what is happening in our culture, in our community, in our politics,” she says. “The topics I chose to cover are not the topics somebody might have covered 20 years ago had they written this same book.”

Julie is proud of her editorial evolution. Though she had the drive to write her first book, Julie admits that she had no confidence in her writing initially. She went back to school at California College of the Arts in San Francisco, completing an MFA in writing to craft her author-voice, which also forged her sense of belonging in the writing community.

“I think as writers, every piece of writing is evidence of our best in that moment,” Julie postulates. “But then the minute it’s done, we have evolved further. I can look back at my second book and say, ‘Wow, I can tell stories much more effectively now than I could then.’”

Julie exemplifies the takeaway message of Your Turn: true happiness is found doing something one loves, one has a talent for and where one feels belonging. As the book details, that sentiment is far easier imagined than accomplished.

She reiterates that she is not an expert on the topics she writes about, but does see a throughline connecting her discussions of parenting, race and modern adult life. “What these books all have in common is tremendous empathy for my fellow humans,” summarizes Julie. “Each book is just rooting for humans to make it.” 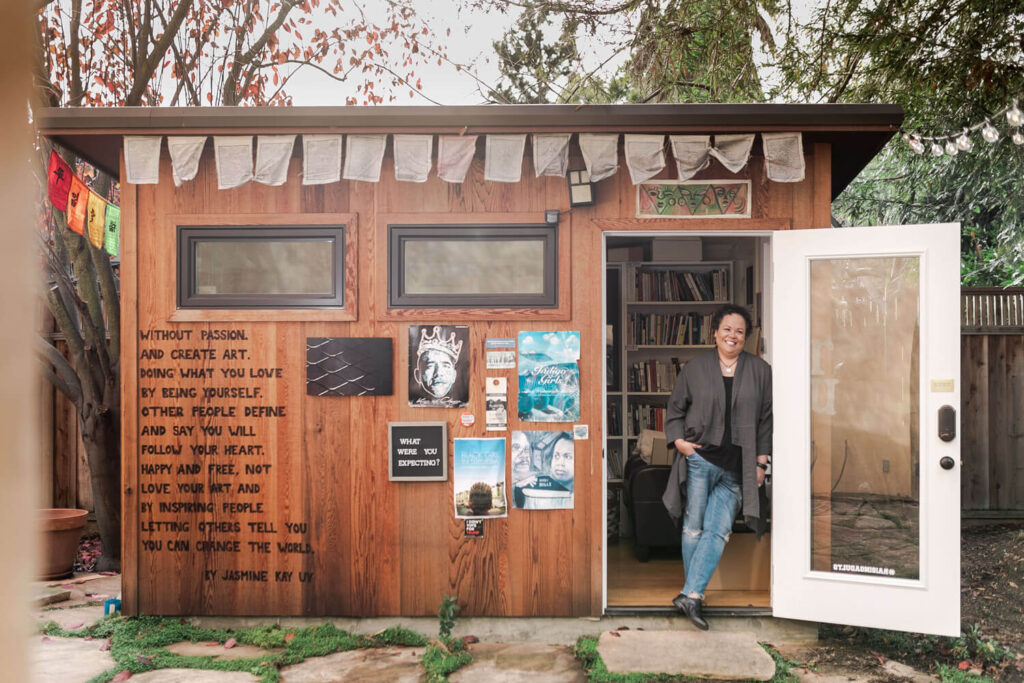