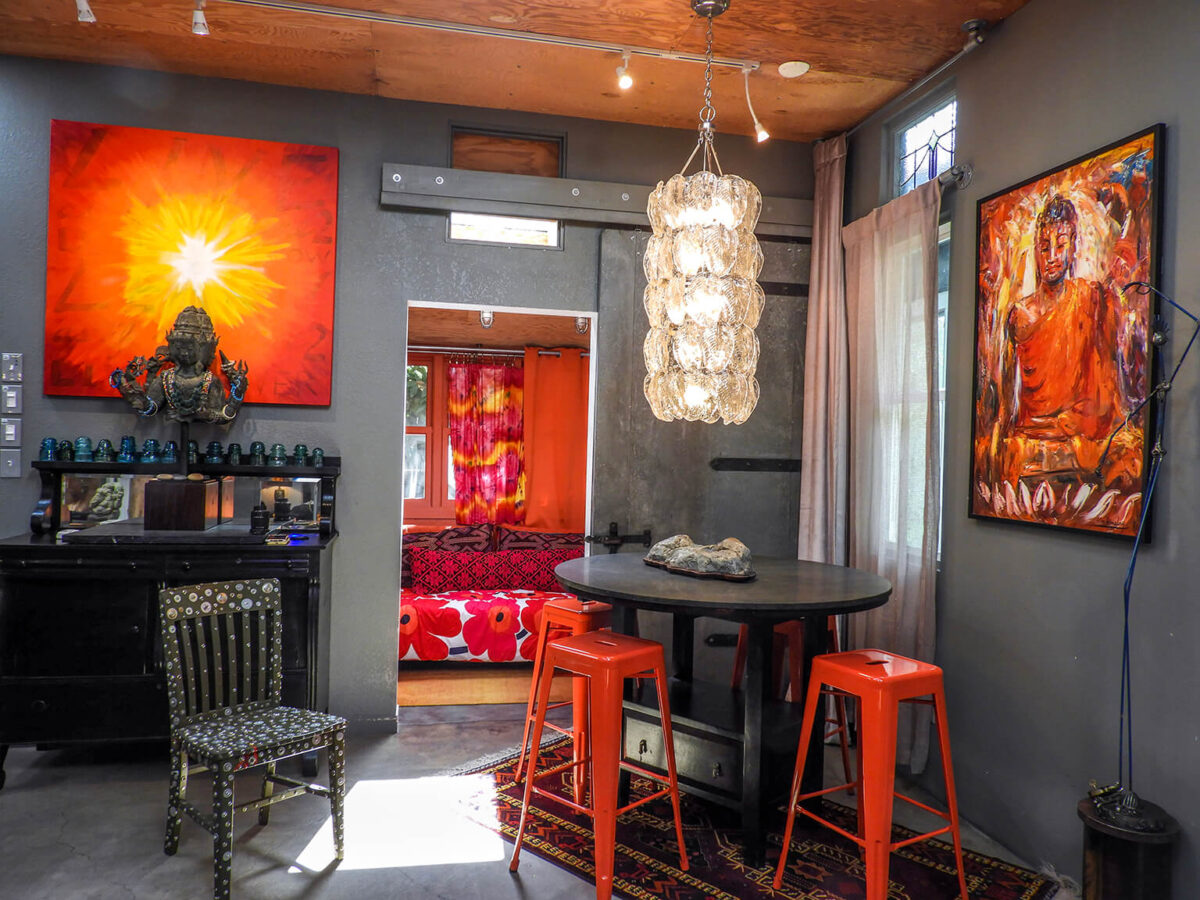 You’re standing in front of a door. Not a run-of-the-mill kind of entryway, but one of thick, dark wood with a submarine hatch wheel and a porthole of opaque glass. Presenting like a portal to adventure, this door beckons. Answer the call, and encounter the Peninsula’s funkiest, most imaginative Airbnb.

One of two vacation rentals residing on a half-acre property in East Palo Alto, the building’s equally artful interior is the handiwork of super-host Todd Gaviglio. A world traveler, painter and sculpturist (specializing in traditional statues as well as salvaged material ones), Todd converted his former home and art studio, furnishing both with his creative projects as well as artifacts and art from around the globe. Staying here means experiencing your own Night at the Museum.

“I’m not a businessman,” Todd freely admits. “It’s more for my own gratification and expression and balance for me.” Despite that absence of ambition, he’s achieved the lofty Airbnb Plus badge, reserved only for top-rated, highly-booked venues with one-of-a-kind flair. “There’s so many decisions behind every little thing you see,” this host with the most reflects. “I try to have things look one way at a distance and another way up close.”

Ready to plunge into this pay-for-stay masterpiece? Hold on tight because here we go! 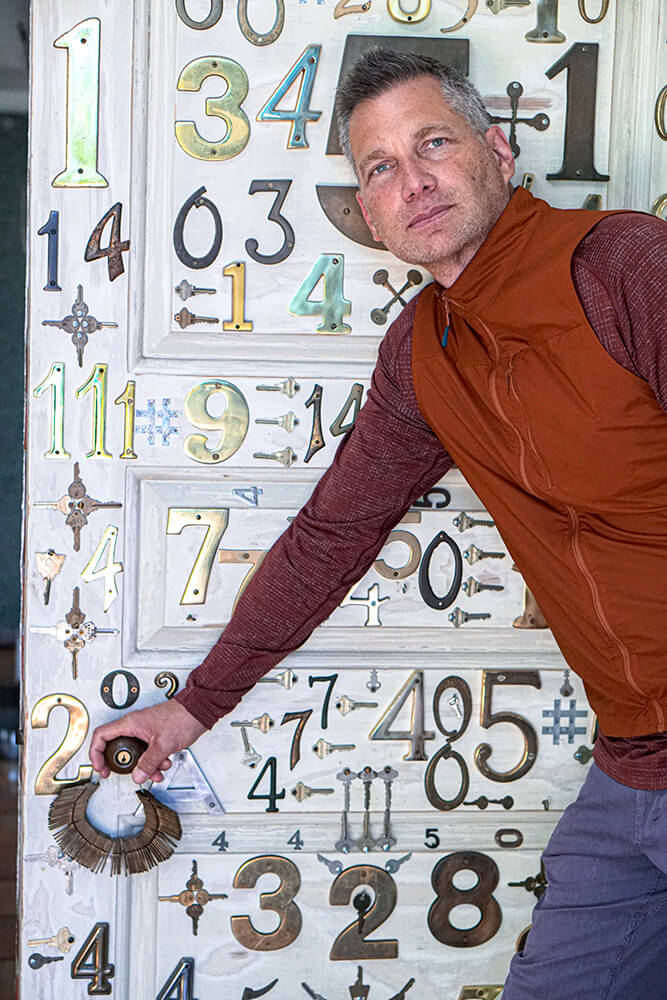 Even before your mind registers the eclectic decor, you’re engulfed by an exuberance of color. Unsurprisingly, Todd isn’t a fan of the neutral, subdued palette. (“It’s almost like a mausoleum,” he tsks.) Instead, his rooms range from sunset tones (fiery rose, lava orange, tangerine, saffron yellow) to tropical ocean shades (Caribbean blue, turquoise, sea green, aquamarine). Passing a peppy coffee table, Todd brushes his hand across its surface. “To me, it just sings,” he muses. “The red vibrates.”

Some of Todd’s guests travel to receive treatment at nearby Stanford Hospital, so the cheering colors provide respite and replenishment. He also sees plenty of out-of-towners, “digital nomads” seeking a stimulating setting to work remotely as well as Stanford Live performers and other artistic types looking to get their creative juices flowing. “And then honestly, there were people that just couldn’t get a hotel,” he concedes with a smile.

A rule-breaker in more than color scheme, Todd situates rustic, primitive elements next to modern, sleek ones for an industrial chic atmosphere. “I believe in juxtaposing things that don’t ‘belong’ together,” he explains. “You appreciate each one more.”

With a fastidious eye for detail, Todd strives for a “divergent” aesthetic. “Maximalist is what I’m hearing,” he comments. That means artwork everywhere you turn and patterned rugs everywhere you step. Books organized by category and color. A medieval-style chandelier in the shower. And so many eclectic light fixtures and neon signs it takes a scavenger hunt to turn them all on and off again. 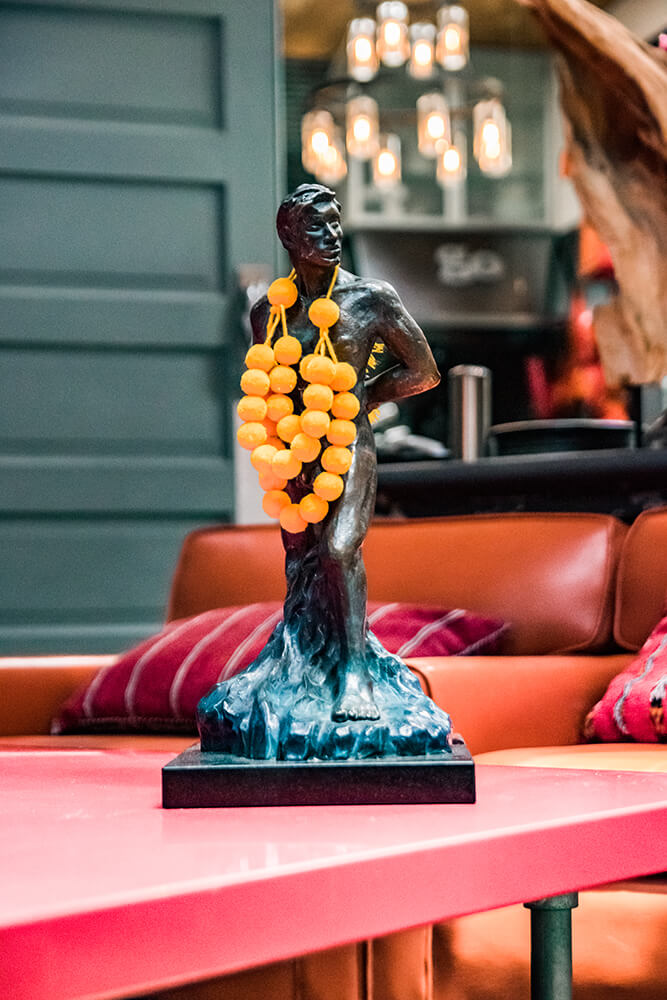 Of course, there’s also oodles of sculptures and paintings, many of them Todd’s own creations. “Generally, everything that happens, I kind of process it through art,” he shares. His bronze sculptures can also be found in private collections as far away as Germany and France—though Todd says parting with his paintings is another matter entirely. “They’re like my children,” he confides.

In the case of Todd’s salvaged sculptures, he hopes Airbnb guests will find his reclaimed work a chance to get reflective. “You can look at it at the superficial aesthetic level. Or you can look at it and think, and then use it as a meditation device: ‘What do I see? Why do I see that? And why do I perceive things that way?’”

According to Todd, the ideal home should display a variety of different elements designed to stimulate or rest your mind, body or spirit. “So that’s why when I look around, there’s ‘thinking’ art, but there’s also maybe aesthetically peaceful things too.” Whether you’re seeking a meditative retreat or a stirring escape, Todd’s intentionality is easy to see. Down to the drawers and the doorknobs, every little detail is orchestrated.

So exquisitely detailed are each of Todd’s rooms, that it’s not uncommon for guests to cycle through bathrooms and bedrooms each night. “They like to migrate from zone to zone,” he relays with a grin. 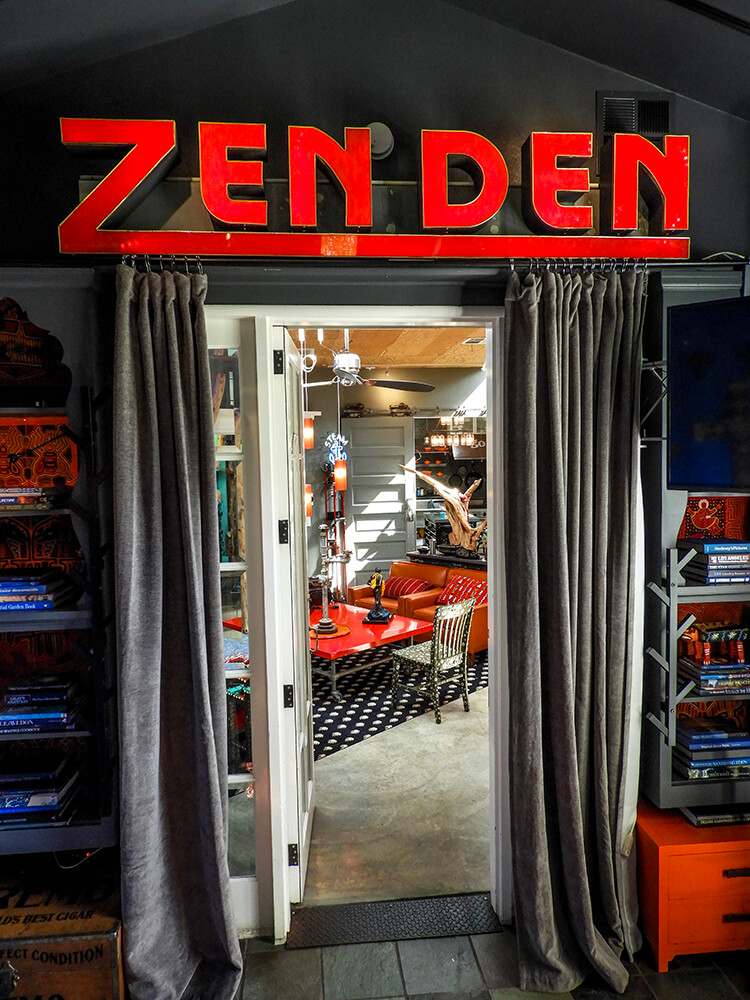 A Taste of the World

If there’s anything that rivals Todd’s appreciation of an artful interior, it’s his passion for world cultures. Todd’s restless spirit has carried him from Morocco to Mexico, Bali to Brazil, Suriname to Switzerland. And throughout his adventures, he searches for meaningful mementos. “I don’t want some little key chain,” Todd remarks of his vast traveler’s collection. “I want something nice and solid and big and meaningful and expressive of that culture and that aesthetic.”

The result? Jhandi flags sway from bamboo poles in the courtyard and a bronze miniature of the Taj Majal sits in the book nook. Mosaic globes of multi-colored glass from Oman hang in the bedroom. And a statue of the three-faced Lord Brahma (bedecked with bracelets and necklaces from Turkey, Greece, and the Vatican) presides over the living room.

Todd, a retired Peninsula teacher and principal, credits travel for many invaluable life lessons. “Perfection is not as beautiful as imperfection,” he shares of one such epiphany. To illustrate, he recounts a trip to Cambodia.

“There were Buddha figures that had been buried, that were uncovered,” Todd recalls. “They were rotted and had termites in parts of them, but it created this beauty to them: that they were somewhat decomposed and ethereal… ephemeral.” It’s one reason he enjoys creating patinas on the surface of his own bronze work. “For a bronze sculpture, you want it to show some irregularity,” he explains. “It makes it more interesting. And it’s more significant. More relevant. Gravitas!” 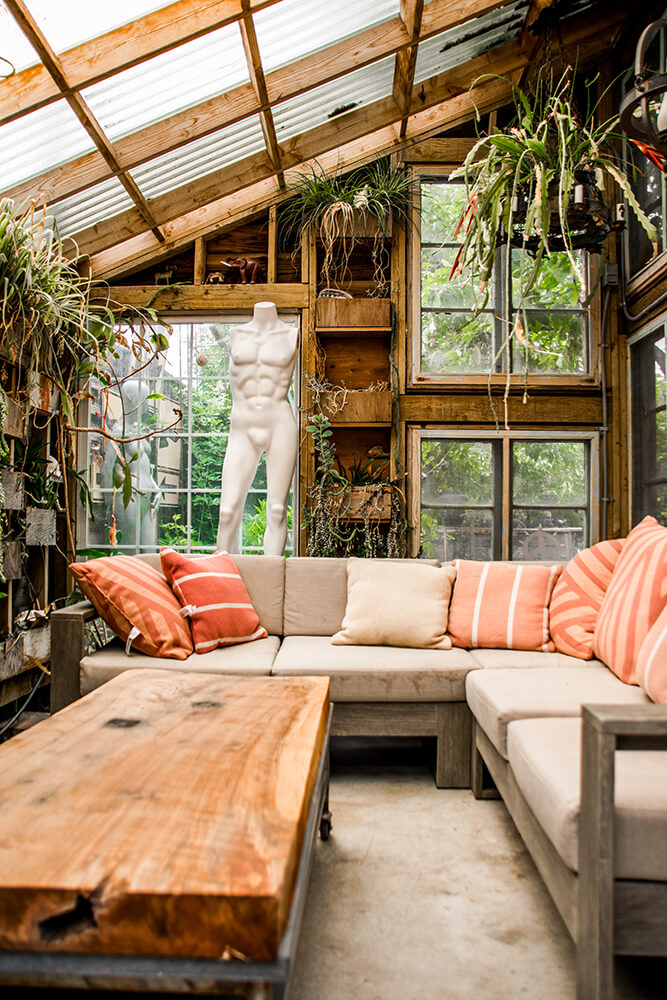 He pauses to reflect further on the allure of travel. “If you’re in your regular routine, you don’t notice things…It’s the same people, the same routines, the same location, the same buildings… When you’re someplace else, when it’s something distinctive, you remember.” He adds, “I think what creates a memory is if it’s distinctive, right? If it stands out. Otherwise, it blurs together.”

When on the lookout for new pieces to add to his collection, Todd admits that he’s no good at bartering. Actually, he takes great pride in that. “I met the person who made that. It’s beautiful to me. I had a conversation with them. They’re artists,” he emphasizes, “and I paid them a fair price.”

Saving the Environment one Plate at a Time

Passionate about the environment and upcycling, Todd has also furbished his Airbnb units with reclaimed finds, heirlooms and interesting artifacts from yard sales. “There’s plenty of mirrors that already exist in the world, that are out there in salvage yards and flea markets or in your grandmother’s basement,” he observes. 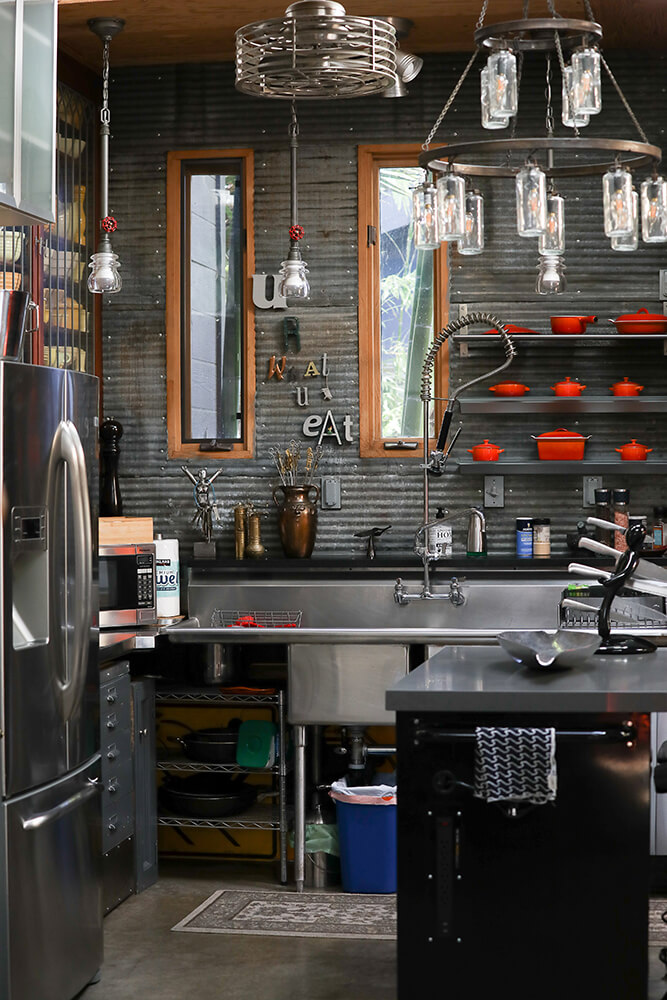 To that end, Todd repurposed his mother’s porcelain plates as wall decorations and constructed an ironic step ladder out of old handicap signs. He even incorporated corrugated tin from the property’s defunct chicken ranch into the building’s design, honoring its farming past from before he bought it back in the early ‘90s.

“Beauty doesn’t have to come from a big box store,” reasons Todd. “So maybe you don’t like the color of that dresser your grandmother had—But could you paint it? Could you sand it down to just bare wood? Can you put a piece of marble on top of it? Could you nail a piece of metal across it? Just make it yours.”

This is also why a handful of mannequins can be found sunning themselves in the back garden. Todd rescued these discarded figures from beside the Nordstrom dumpster. “It’s kind of sad because they have these signs on them. It’ll say ‘trash’ or ‘incomplete.’ Kind of profound in a way though.” As he passes these alabaster models, now posing among the cactuses, lounging on benches and watching over his vegetable garden, he notes, “They’re almost like little garden spirits.” Then, after another moment, “Honestly, I may need to scale back.” 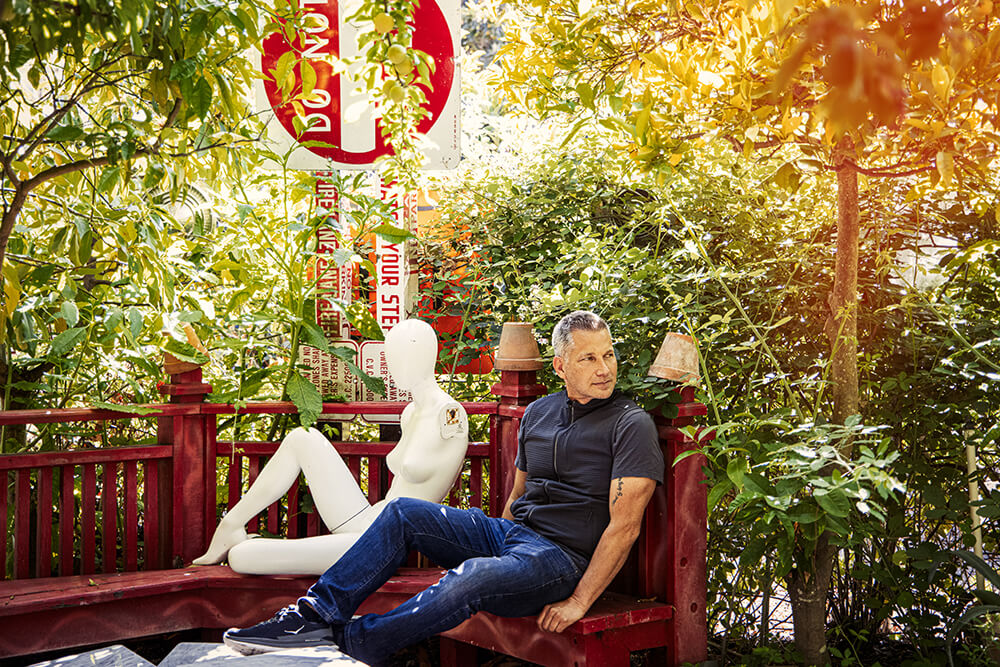 If you’re lucky during your visit, you’ll encounter Todd and his young daughters out picking vegetables and fruit in the yard. “It’s like Easter to come to the garden,” he describes. Harvesting the bounty of the land, nature’s egg hunt, is one of many fond memories here. Todd has plenty more of family milestones and festivities. Like the weekend he celebrated his grandmother’s 100th birthday party on the grounds. Or all the times he hosted elaborate Day of the Dead celebrations—complete with Mexican folk dancers, musicians and altars designed by Todd and his artist friends—for 200 revelers.

With a grimace, Todd recalls the time he almost sold this place: “The realtor had a buyer and had a really good offer,” he recounts. “But I was confronted with the daunting task of getting rid of all my stuff… It’s sentimental, a lot of it.” With a property so steeped in meaning, he couldn’t bear to part with it.

As Todd continues to tread the garden path, he stops to survey the land. “It’s very fertile ground here,” he remarks. Seeing this creative soul standing amidst the cucumber and chamomile plants, it seems a particularly fitting observation.