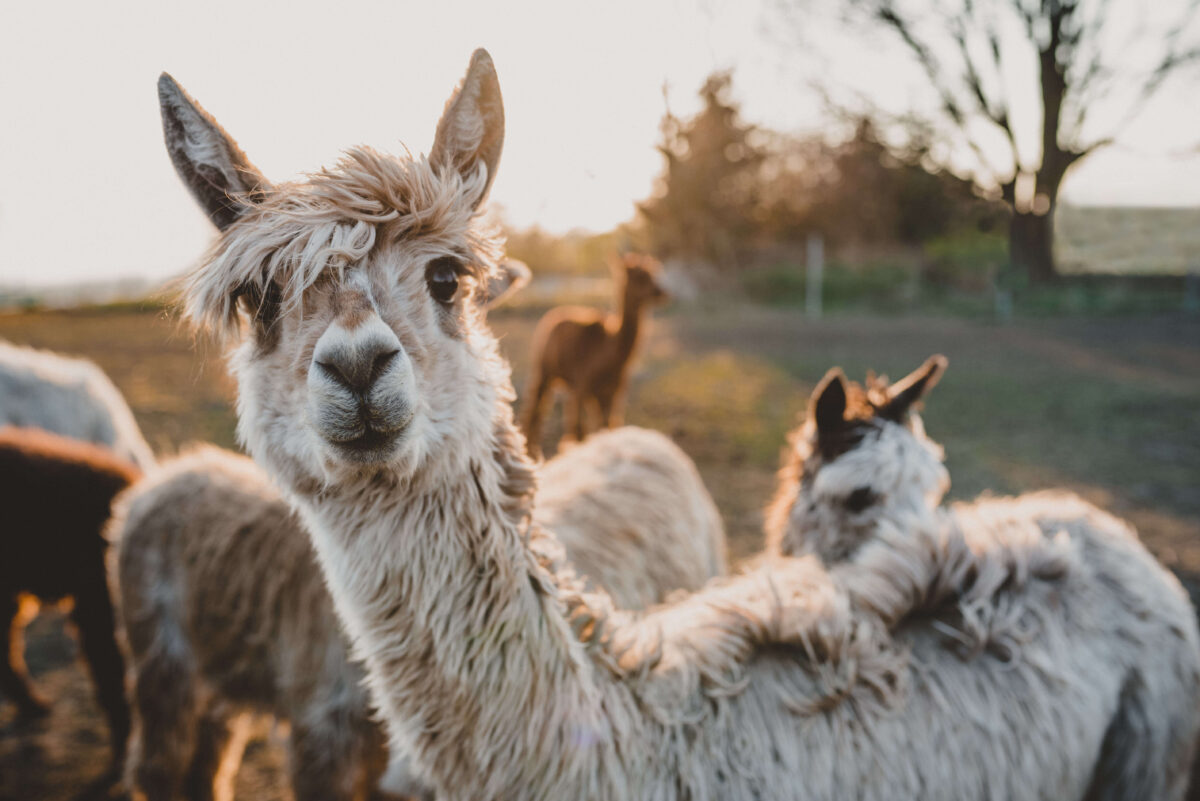 Hailing respectively from North Carolina and Washington State, Ken and Victoria first crossed paths working at Acuson in Mountain View—Ken in sales and Victoria on the clinical side. “I moved to Montara because I liked to surf there,” Ken recounts, “and I just thought it was a beautiful place.” Victoria agreed, and when they married in 1991, they purchased four acres of coastside land so they could spread out a bit more: “We didn’t have any notion that we were going to be raising alpacas until the grass grew six feet, and we had to find a way to keep it down.”

They first tried goats and then moved on to alpacas. “The goats were fun,” Ken recollects, “but once Victoria met the alpacas, she fell in love with them.” And, as the saying goes, one thing led to another. “Once we learned a little bit more about alpacas, we really got excited about them,” summarizes Ken. “We started breeding them and raising them and it took off from there—we started small, but it grew very rapidly.” 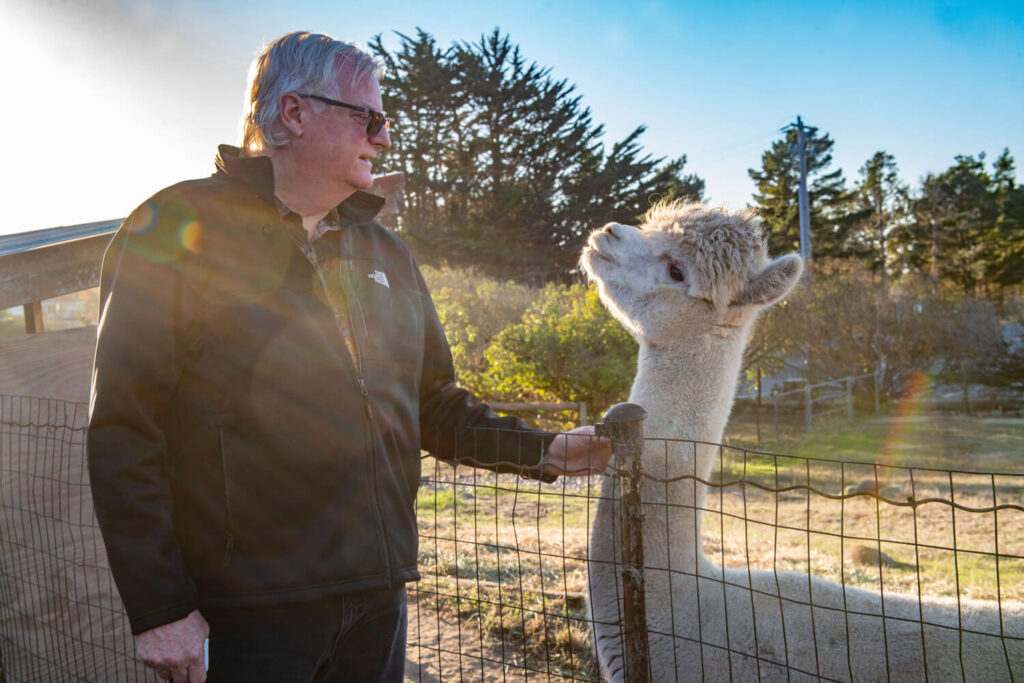 Being early adopters of alpaca ranching led the Hibbits family into further expansion including boarding, showing, fiber processing and production. Victoria trained to become one of five people certified to screen alpacas being imported to the U.S., leading to assignments in Chile, Bolivia and Peru. Having studied alpaca phenotypes, Victoria applied her expertise to help other breeders make decisions about their herds. The pair also used insights gleaned from their research to advance practices on their own ranch—along with doing extensive consulting with folks just getting started. “The bottom line is that people just love alpacas,” Ken says. “When you have them and people see them, many times they want to own them, and so we’ve worked very hard trying to support people getting started in their own alpaca endeavors.”

For the alpaca curious, Ken and Victoria represent a local treasure trove of helpful tips and experience. Like their larger cousins, the llamas, alpacas are in the camelid family, and their domestication began in pre-Incan societies in the Andes over 6,000 years ago. While llamas have primarily been used as beasts of burden, alpacas have been bred for their fleece. “They are descended from the vicuna while llamas are descendants of the guanaco. Both of these camelids still exist in wild herds in South America,” relays Ken. Victoria gestures to an alpaca with a soft peach-beige wash of color in the far paddock: “Do you see her? That’s the vicuna coloring. And her fleece is the absolute softest.” 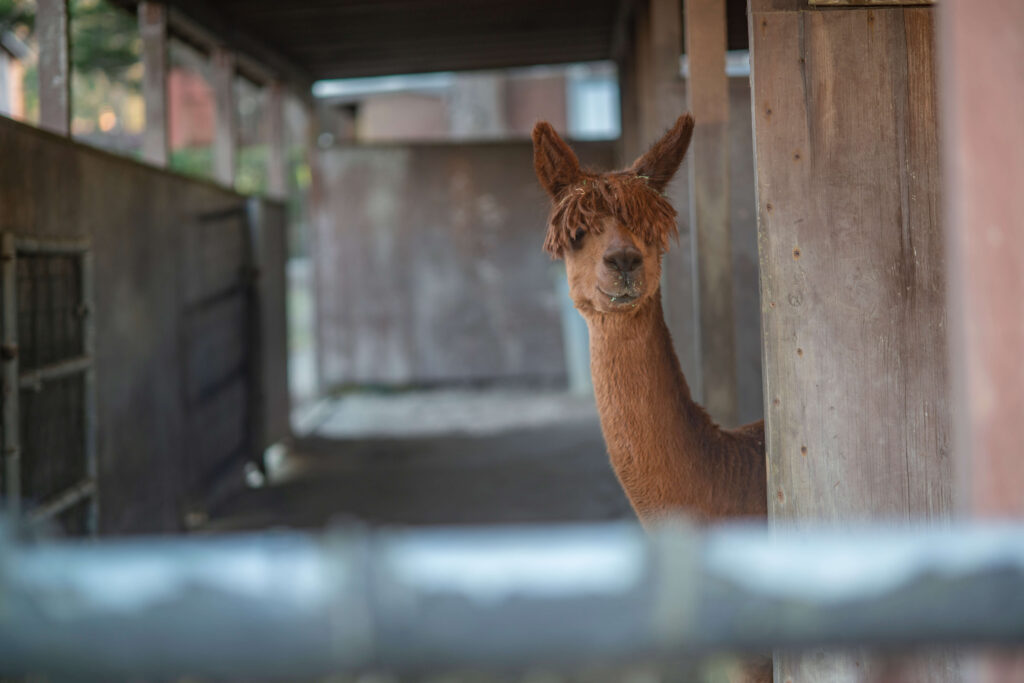 Alpacas come in a range of 16 shades from auburn to brown to cream but beyond their coloring, they generally look the same to the casual observer. Once Ken points out the differences, they become easier to discern. “There’s the Huacaya and they look kind of cottony while Suri fleece is corded and hangs off the alpaca parallel to the body,” he clarifies. Ken further illustrates the variations by comparing strands of yarn: “See how the Suri yarns really shine? Whereas the Huacaya is softer. Huacaya fleece is used more for garments worn close to the skin and Suri is used more for coats or shawls.” The yarns made from Alpacas by the Sea fleece are labeled with the name of the alpaca, the kind of alpaca and the number of animal shearings. Alpacas are sheared once a year in the spring to allow time to grow back their coats for warmth in the winter.

Ken and Victoria have lived with alpacas for more than a quarter-century, and it’s clear that they have successfully expanded the definition of family. “The alpacas are woven into the fabric of our lives,” reflects Ken. “Our kids have grown up literally in the paddock with the animals and they’ve seen every phase from start to finish—breeding, life and death, full circle.” Assisted by their two children, McKinley and Sunny, and some local help, the Hibbitses describe alpacas as “easy keepers,” requiring little more than fresh grass and hay. Rather than tearing up grass roots as they graze, alpacas gently clip the tops, leaving a surprisingly even surface in their wake. As Ken explains, one of the reasons for this is that alpacas don’t have top teeth, only a soft palate, which creates that adorably characteristic split when their mouths move. Noting the dirt patches in the field, Victoria points to a white alpaca folding her legs under her. The bare spots make sense as the alpaca suddenly begins to roll. “Dusting is a way to dry out their coats,” narrates Victoria. “You can see where they create bowls in the ground; it’s their way to clean their coats and dry out any moisture.” 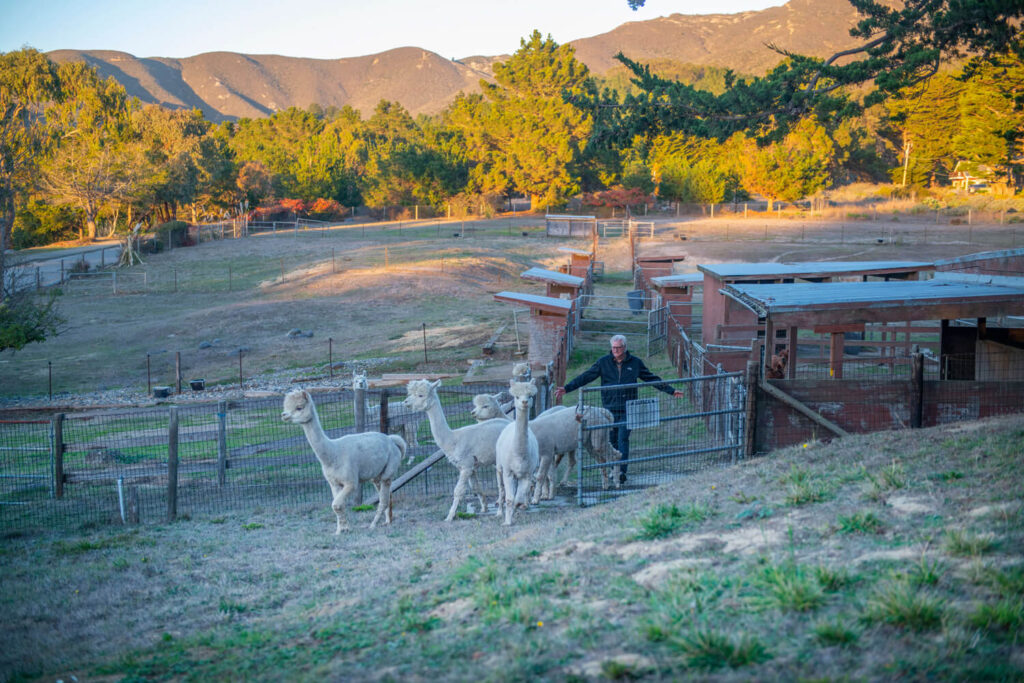 As far as bad habits, alpacas are often gentler than their larger llama cousins, who are habitually labeled as more likely to spit when they are irritated or displeased. The Hibbitses are quick to set the record straight. “There are many, many llamas with absolutely wonderful temperaments,” Ken says. As for alpacas, spitting is mostly a matter of establishing dominance or defending territory, and they rarely spit at people. However, Ken advises, if you do see an alpaca draw her neck back and pin her ears to her head, take a few steps back—lest you get caught in the crossfire.

Alpacas aren’t entirely defenseless, though. When they feel threatened, they take to the highest point in the pen and sound the alarm. “It’s sort of like a donkey bray,” describes Ken. “It really sounds more like a yell or a scream,” amends Victoria. “It’s an old behavior from nights on the Altiplano. When they hear that sound, every alpaca will stop and look.”

Ken and Victoria have also been deeply involved in events held by the Alpaca Owners Association (AOA) and Ken is a certified AOA judge. When their children were old enough, they participated in showing alpacas in obstacle courses that included walking up and down steps and ramps and around cones. “It was a joy to do as a family,” Victoria says, gazing out at a paddock holding Vega and Pandora, a couple of alpaca gals who have become best friends. Though the couple is modest about their accomplishments, their walls are lined with photos of alpacas with blue ribbons—a testament to their success.

Even as they worked full-time jobs (Victoria is now VP of federal accounts for Change Healthcare and Ken is a product sales specialist for GE Healthcare), the couple kept as many as 95 alpacas on the ranch before scaling back in recent years to a tidy herd of 16 favorites. “We had it as a business, but now we’re really in it for the enjoyment,” Victoria explains, as she walks down the fenced corridor between the carefully designed paddocks they’ve tended for decades. “When our kids got older and went to college, it was time to downsize.”

Even with the years of intense alpaca ranching winding down, the pair can’t imagine life without the furry friends that have been at the heart of their existence. “They really are a part of our community,” Victoria says fondly. “In the evenings, alpacas run around to get their blood up before the long, cold night. Our neighbors will come out and watch them jump around. When a baby is born, everyone wants to know if it’s a boy or a girl and that it has arrived safe and sound into the world.”

Ken says he still gets several calls a day requesting visiting information. Alpacas by the Sea has never been open to the public, instead opting for special visitation days. “We’d like to do farm days again, maybe four or so a year, when folks can visit, as soon as it’s safe,” Ken says, as he opens the paddock gate. He mentions that their daughter, Sunny, is mostly running operations now. “She may want to breed some animals herself and take it in a new direction,” he shares, “so we’ll see where that leads us in the next generation.” In the meantime, they’ll just continue to enjoy life with these gentle creatures. “When you have a rough day at work and you come home, the alpacas are the same; they are pleasant and peaceful,” Ken says. “They give so much more than they take.”