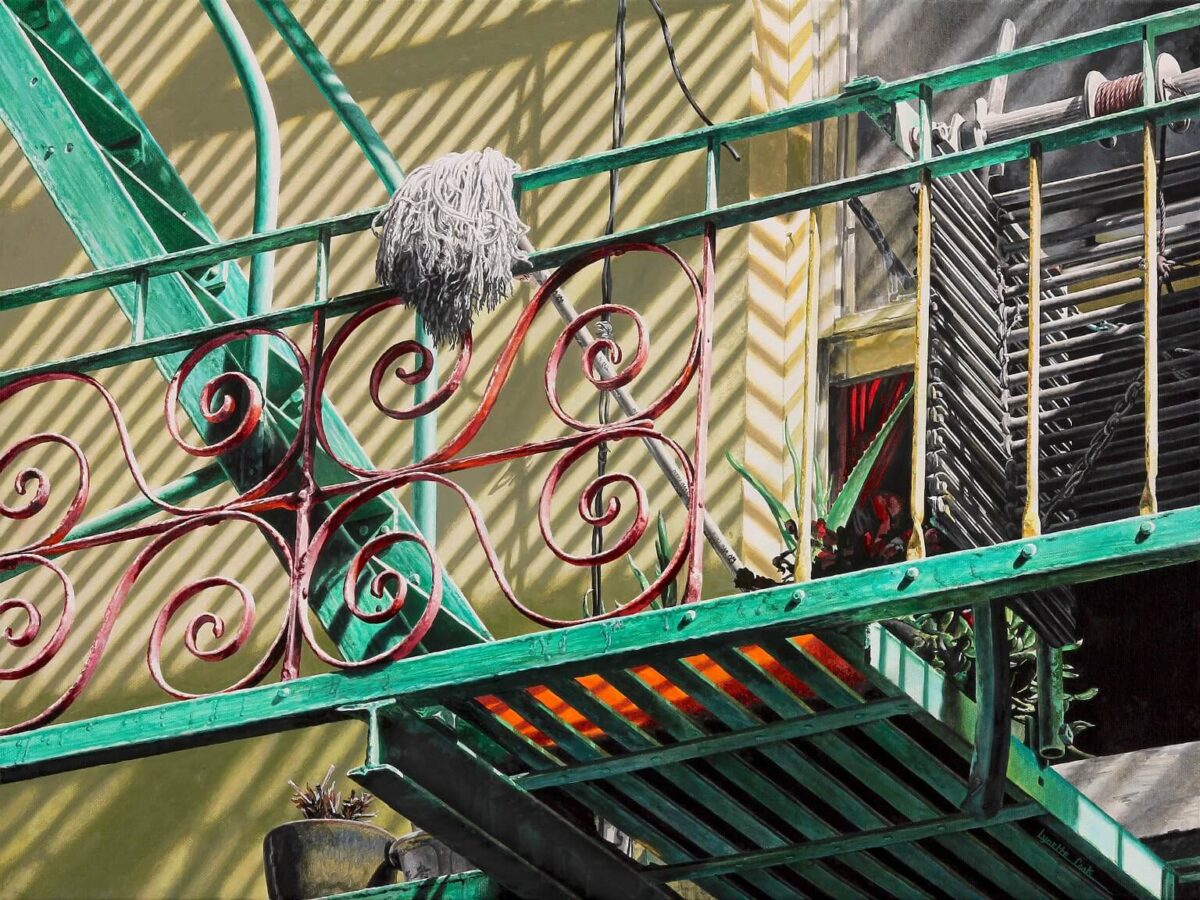 Is it a photograph or a painting? Wandering through the Andra Norris Gallery in Burlingame, a street scene from San Francisco’s Chinatown inspires the question, causing one to draw closer, ponder and carefully examine—then finally process the answer with appreciation and wonder. A glance down at the lower corner reveals a signature and the work’s creative mastermind: SF Peninsula artist Lynette Cook.

Fooling the eye has been a goal of painting since ancient times. The Greek painter Zeuxis was said to have painted a boy holding grapes succulent enough to deceive  birds. In 1795, the American artist Charles Willson Peale painted his two sons descending a staircase and framed the work in a wall niche. The painting reportedly deceived George Washington, who nodded in greeting as he walked by. Finally, there was a movement of trompe-l’oeil (fool the eye) realists in late 19th-century America that delighted in still life oil paintings of almost palpable reality.

As a 21st-century artist, Lynette creates acrylic paintings of local urban landscapes so compellingly real that at least one visitor to Andra Norris Gallery refused to believe that he was seeing a painting and not a digitally printed photograph, an understandable mistake.

The inspiration for Lynette’s work lies in photorealism, an art movement of the 1960s that directly rebelled against wild-man abstract expressionist paint flinging by approaching art with exacting detail. Today, with conceptual art and abstraction dominating the art market, realist painting has been usurped to a certain extent by large-scale color photography, which is why Lynette’s stunning lifelike interpretations catch gallery visitors off-guard.

Rather than taking the direct fine art road, Lynette’s journey initially led her in a different direction. Growing up in a small town in southern Illinois, far from urban art centers, Lynette spent hours in the family basement copying illustrations from nature books; in junior high, she made paintings on riverbed stones and sold them at the country fair; at her college in Mississippi, she took a full load of drawing, painting, ceramics and printmaking courses while pursuing an ambitious double major in science and art. “I knew I liked art but I also wanted to do science,” she says. However, having had no professional artist role models, she couldn’t envision becoming a fine artist but she also didn’t see herself as a scientist. The solution to her career dilemma: scientific illustration. Lynette identified a small scientific illustration program at California College of the Arts in Oakland, one of very few offerings in the 1980s. Despite being “scared” by the idea of California, especially, Lynette notes with amusement, its fruit flies and earthquakes, she set a course for the Bay Area. And while many art school students face uncertainty with their degrees, Lynette transformed an unpaid internship into a nearly full-time position at San Francisco’s Academy of Sciences within six months of graduation. Her position, split between the Exhibits and Invertebrate Zoology departments, was a dream job; among the memorable projects she took on was a huge astronomical mural of galaxies and nebulae, created by airbrushing and spattering, for the Academy’s exhibit of Chesley Bonestell, known as the father of space art.

During her 30-year career in scientific illustration, Lynette also ventured into less glamorous assignments—like stippled pen-and-ink drawings (made with the help of an optical device affixed to a microscope) of the infinitesimally small sex organs of snails. Aside from her work at the Academy, she took on freelance jobs with agencies like NASA and SETI Institute, painting such imponderables as planetary collisions in the constellation Aries, dust rings circling a superdense black hole and the escape of a comet from the Oort Cloud surrounding the solar system.

Although challenging and rewarding, the field of scientific illustration began to radically transform, as many others did, with computerization. In 2010, after facing a serious illness, Lynette finally shifted her focus to fine art painting, giving her more control of her subjects, her practice and her life. As if to validate her decision, Lynette’s artwork was promptly recognized in regional shows and by galleries and collectors.

Lynette describes a series entitled Praesentia, Latin for presence, as “contemporary visions of time-worn buildings that create a metaphor for the human experience.” The series began with a photograph taken on a 2007 trip to China’s Great Wall with her mother, Charlotte Cook-Fuller, who is also an artist. In Lynette’s acrylic on canvas Inner Calm, Charlotte is seen snapping a photo inside one of the Great Wall’s blockhouse towers, while a calamitous threat looms through an arched opening behind her. “Under such circumstances, the woman has a choice: to turn toward the threat and become worried or anxious—or to turn within and remain calm and centered,” is how Lynette captures her intent.

A four-year series on brick fortifications in the U.S. followed, again based on Charlotte’s travels, leading to her current series on San Francisco’s Chinatown, with its architectural glories and oddities, its balconies, shadows, and pennants—and its fluttering, colorful laundry, captured in works like Wash Day at Susie’s. Lynette marvels that laundry never falls from the clotheslines, such is the resourcefulness and skill of these hidden laundresses, “a hidden element,” as she describes it, “in a city that seems gritty and impersonal a lot of the time.” Unlike some of her artistic predecessors, the uncanny realism in Lynette’s paintings is not meant to be playful deception. Instead, they are depictions of landscapes that have both visual interest and meaning for the artist, who carefully edits her photos before transferring the projected contours onto vellum and then to her gessoed canvas. Lynette’s paintings capture the photographic moment but acquire a pictorial density through the painting process.

These days, Lynette is keeping busy in her garage studio and with a new exhibit at Andra Norris Gallery that runs through June 1. A disciplined worker, she counts herself lucky, after three decades, to be able to work at home with her cat, her iPod and her backyard view. “I get to go into the city with my camera, I take photographs and eat dim sum and have my exploration,” she says. “I can tell stories with the work.”

As for her next series, Lynette is undecided, still content with mining the rich material of Chinatown. “I take photographs when I go somewhere else, but what of that will become art, I don’t know,” she ponders. “There was a nice fire escape in Oregon near a train that I got… There was a nice stairwell in Montana…”