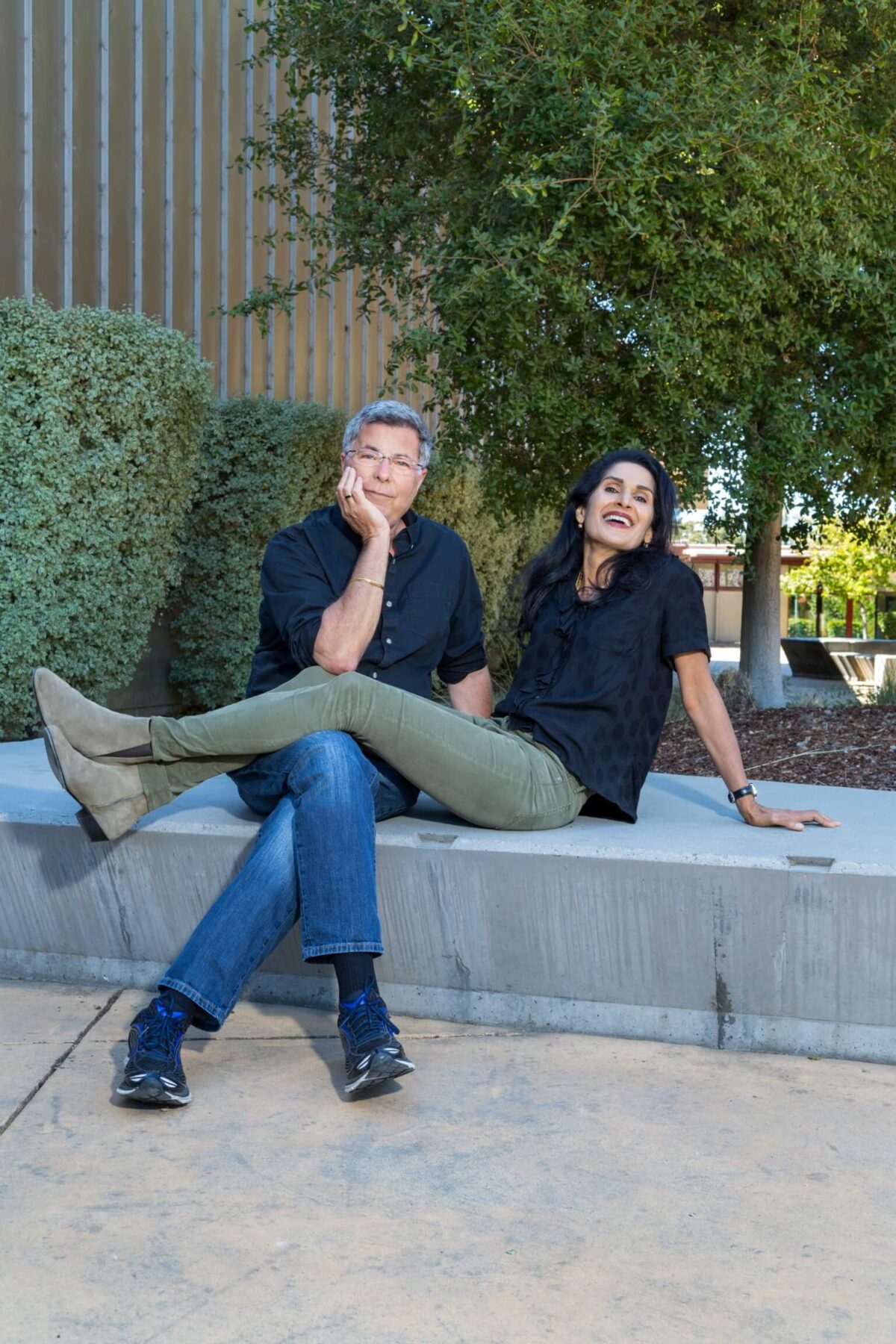 It seems appropriate that documentary filmmakers Michael Schwarz and Kiki Kapany had the equivalent of a Hollywood “cute meet” beginning. The date was May 7, 1989. Kiki was a partner in a Marin County law firm, and Michael was director of productions at KQED-TV. While at a club listening to African musician Kanda Bongo Man, Kiki noticed a guy looking at her from across the bar. She says an instant sense of recognition washed over her: “That’s the guy I’m going to be with for the rest of my life.” The two talked briefly that night but came away from the evening realizing they didn’t know how to contact each other. In a romcom-worthy plot development, the universe didn’t wait long to bring them together again. Just three days later, Kiki walked into Julie’s Supper Club in San Francisco. “The place was packed,” she recalls. “And there was Michael.” This time, Michael got Kiki’s number, and as the saying goes, “That was it.”

Marriage soon followed, along with two daughters, and in June 1996, Michael exited KQED to develop In Search of Law and Order, a three-part project exploring the juvenile justice system. With that production, Kikim (a blend of Kiki and Michael) Media was born, along with an enduring husband and wife professional partnership. Coming from a legal background, Kiki says that documentary filmmaking felt like an easy transition to make: “With litigation, you’re collecting your evidence and creating a story to present to a jury or a judge. And with documentary, it’s a similar thing. You’re collecting your evidence and you’re creating a story to present to the broadcast audience.” To further seal the deal, “I was affecting more lives with broadcast,” she says. “And I really loved that.”

Job responsibilities fell into natural roles—Michael as filmmaker and Kiki running the business side of things as CEO and producer. Since Kikim’s founding, they’ve produced dozens of award-winning programs for broadcast television and web distribution spanning a wide and eclectic range of topics. And while many of the Bay Area’s nonfiction filmmakers tend to congregate in creative hubs like San Francisco and Berkeley, Michael and Kiki put their stakes down on the Peninsula, to better balance work and family life. After starting their business in San Carlos, in 2003, they moved Kikim Media to a second-floor office space on Oak Grove Avenue in Menlo Park, minutes from their home and their daughters’ schools. Through some very hectic years, that proximity is what made the balancing act of parenting possible—whether it was Michael stepping away to coach a soccer game or Kiki jumping out to drive a carpool. In the meantime, they built up their full-time staff and found top freelance talent willing to make the commute for the chance to work with them.

The mission statement they wrote 22 years ago still guides their production values: “A true story, honestly told, can change lives.” If anything, they say that mission resonates even more strongly today. “It’s really about facts and truth,” Kiki says. “We think the most powerful stories really can have a big impact,” Michael adds. Their most recent project to air, Silicon Valley: The Untold Story, examines the evolution of Silicon Valley into the dynamo of innovation that has altered nearly every aspect of human life. The three-part series hit especially close to home for Kiki, given that it featured her father, Narinder Singh Kapany, also the father of fiber optics. Their 2015 PBS documentary, In Defense of Food, based on the best-selling book by Michael Pollan, cut through dietary myths and misconceptions to answer the question: What should I eat to be healthy? In Defense of Food is also a good example of the outreach component Kikim creates with every production—providing free curriculum and modules, which facilitate viewing and discussions at middle schools, high schools, adult continuing education programs and in local communities. “It’s a great source of satisfaction to us to see the depth of reach,” Kiki says. Most recently, Kikim completed Ornament of the World, a project that speaks to the long-term game and precarious funding conditions of documentary film production. Kikim first optioned the book on which the film is based back in 2003, drawn to the relevance of the 800-year period in medieval Spain during which Muslims, Jews and Christians forged a shared culture of tolerance. Backed by four different National Endowment for the Humanities grants and individual philanthropists, the two-hour film is scheduled to air on PBS in 2019, marking the culmination of an exhaustive but ultimately satisfying journey from the project’s genesis. While the timing of concept to completion ranges project to project, for nonfiction filmmakers, fundraising is the constant challenge. With once dependable national funding agencies under threat, Kiki and Michael say private money needs to play a bigger role. “It’s a bit of a paradox being here in Silicon Valley where there’s enormous wealth everywhere, but a lot of the money is looking for return on investment,” Michael acknowledges. “The return on investment we can promise is a social return. It’s educating people and doing something that makes a difference. It’s trying to make the world a better place.”

Next on the Kikim agenda, a NOVA project on self-driving cars and trying to secure funding for Science Bytes, an education initiative with the National Science Teachers Association to provide vital tools for teaching science. “Science drives the economy,” Michael says. “If we want to be competitive, we need to educate our children better.”

With both daughters now out of college and living on their own, the documentary team is running at full Kikim rhythm. “A lot of couples will say to us, ‘I don’t know how you guys can work together’ and I think, ‘I don’t know how you couldn’t?’” Kiki reflects. “We love what we do, and whenever a production comes out, it’s like, ‘We did this!’” And the Award Goes to…Kikim Media

+ The Alfred I. duPont-Columbia University Journalism Award for Investigative Journalism

+ The Investigative Reporters and Editors Award

+ Red and Blue Ribbons from the American Film Festival

+ The Grand Prize in the Robert F. Kennedy Journalism Awards for Coverage of the Disadvantaged