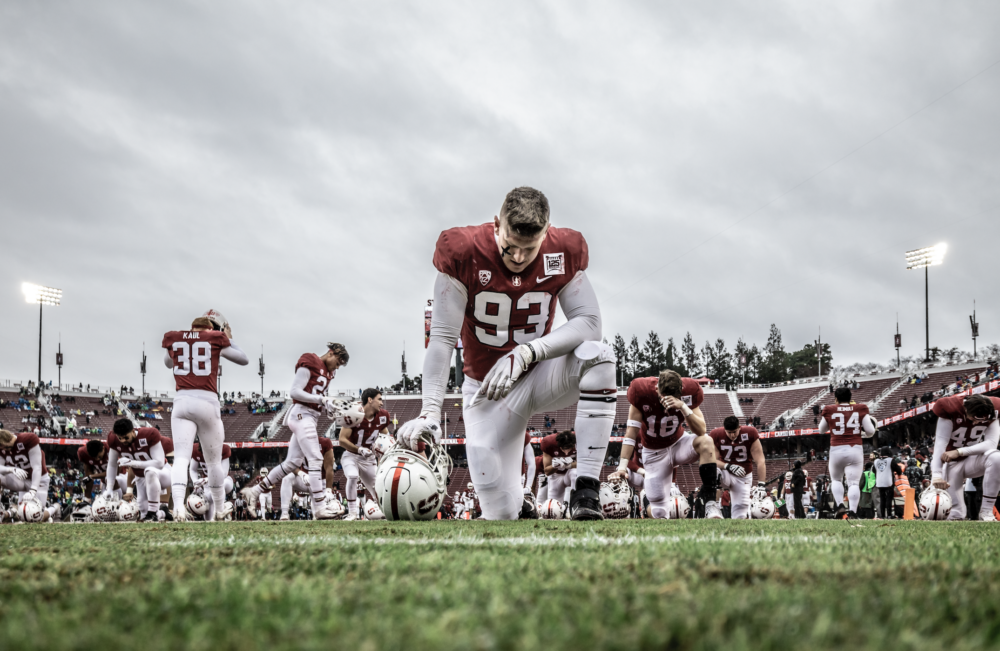 As a highly-motivated member of the Stanford Photo Club in the early 1970s, David Madison didn’t let a locked-up dorm keep him from his craft over the holiday breaks. Living locally in Palo Alto, he covertly found a way to access the darkroom in Wilbur Hall’s basement. “I noticed that the air conditioning shaft from the darkroom went straight up to the roof of Wilbur Hall and that there were rungs inside the air conditioning shaft,” he recalls. “So I used to climb up on the roof and then climb down the air shaft and I’d have the darkroom all to myself for hours at a time.”

No doubt Stanford’s legendary broadcaster Bob Murphy sensed David’s above-and-beyond commitment. Having discovered photography as a hobby in junior high, David started shooting sports for his Gunn High School yearbook. While studying architecture at Stanford, he turned his lens onto the football field, initially shooting from the stands—before petitioning Murphy (Stanford’s sports information director at the time) for official access to the field. “Murph said, ‘Sure, I’ll give you a pass,’” David recounts, although he admits his first images received ego-bruising feedback. “‘These are nice,’” Murphy remarked, “‘but I don’t need pictures of guys’ backs.’”

Still, Murphy gave him another field pass—and David proceeded to earn his own place in the annals of Stanford University sports. Now a professional sports photographer with a storied career, David holds the milestone achievement of shooting 50 years of Cardinal football. That’s five decades spanning coach names like Walsh, Harbaugh and Shaw and jerseys reading Plunkett, Elway, McCaffrey, Gerhart and Luck. Starting with film (250 images per game) and progressing to digital (2,500 images on average), David has shot more than 250 games, including 35 Big Games and 3 Rose Bowls. Total number of Stanford football images: 250,000+

Having shot the single home game in 2020’s abbreviated season, David is eagerly embracing the call, “Stanford Football is Back!” PUNCH asked him to set down his camera long enough to offer up highlights and insights from 50 years on the field.

The new Stanford Stadium has wonderful high angles because the stadium is so close to the field and it has both the mezzanine and upper terrace, so there are some beautiful high angles there. Those angles didn’t really exist in the old stadium. In the old stadium, the crowd was much farther away, but it would create beautiful backdrops when the stadium was full because you’d have that huge unbroken arc of the crowd.

I think football is one of the most challenging sports to photograph because the ball and the play move so fast and because of the geography of the field. If you’re following the action, normally you’re going to follow the ball. So you’re going to start probably focused on the quarterback and when he hands off, you’re going to shift to the running back or when he throws the ball, you’re going to attempt to shift to the receiver. As a photographer, there’s always a big element of chance to being in the right place. You’re just trying to keep it framed up while the bodies are bouncing around in the frame, and you have a very narrowed-down perspective. It’s almost like periscope vision.

A Buffet of Visuals

My approach has evolved in that I’m looking for a broader view beyond the standard action photograph. I try to look for things that are visually interesting, so for me that encompasses pre-game and post-game and warm-up and what might be happening on the sidelines or in the team area. Partly I’m drawn to those images because all of them happen in areas that potentially have different light and visual interest compared with what’s on the field. With football, there’s a lot of stuff going on around the action: You have great crowds, the Band, Stanford cheerleaders and Dollies and the Tree, and so for me, it’s like a whole smorgasbord.

What I’ve been seeing more of now is sons—sons of players whom I photographed in the ’70s and ’80s. There has been a run of those in recent years: Ed and Christian McCaffrey, Chris and Drew Dalman, Bob and Kodi Whitfield. And then there are also Stanford coaches who did not play at Stanford but whose sons did, like Jack and John Elway and Willie and David Shaw. And then of course, David Shaw was a player and then an assistant coach and now head coach.

Keeping it Fresh after 50 Years

When you’re shooting in the same place—the same stadium—over and over and over again, it becomes an ongoing challenge to find new angles and new motivation and new pictures. I think ahead about time of day, possible angles and what I’ve done before that didn’t work but maybe has potential and that I might want to try again. I like to get there early and walk all the way around either the upper tier of the stadium or the mezzanine or the field and just look at everything. I come up with a general idea for what I want to do with the game—and it depends a lot on the game too. Obviously, at the end of a Big Game, if you want an Axe shot, you’ve got to be ready for that, and in position.

Energy of a Winning (or Losing) season

It would be false to say that I’m not affected by the team’s performance and certainly great players and great games and big match-ups inspire me. Stanford-Cal Big Games are always potentially loaded and the big match-up games—historically, USC, UCLA and now Oregon—have energy to them, so that’s inspiring. When Stanford was in its recent golden years and winning nine, ten games every year and a Bowl game, you get a little spoiled. When you’ve got a dog of a season going and players are hurt and there’s not a lot of excitement, that affects me too. A lot of what you’re looking for is that bit of human energy that comes out either through emotion—reacting to a player reacting to the game—or anticipation. So when the performance has dulled all those things down, there’s less of that to grab.

Over the last 50 years, the game has evolved in how it’s played and the speed at which it’s played and the size of the people playing it. There are also a lot more people involved. When you look at old pictures—how many people are on the sidelines or how many are involved both within the team structure and the number of players and people who are on the field for different reasons—all of that has really, really grown. And from the photographers’ point of view, you have fewer places that you can work from because the field has been shrunk in terms of where photographers are allowed to be.

Getting that Unique Shot

There are routines that certain players have that can be interesting. When Christian McCaffrey burst onto the scene, it was clear immediately that he was something extraordinary. His sophomore year, I really focused on following him, and he had a very carefully scripted pre-game warm-up routine, and so once I caught on to that, I began to plan to be there. I knew that he came out an hour before game time, but by about the fourth game I got there and he was already out there, so then I would get there even earlier and just wait.

Emotions of the Game

Generally with sports photography, everybody likes faces. So that’s a big element. I’m always looking for emotion. Happy. Sad. Fierce. Intensity. Any kind of emotion. With football players, because they wear so much equipment, you’re looking sometimes for body language and those opportunities when you can actually see their faces. I definitely have lots of photos that are really nice photos, but they lack facial expression. Football is especially hard because of the bars on the face mask. You can have a wonderful shot and the face mask is cutting right across the players’ eyes, so it’s not as wonderful of a shot.

I think everyone is excited because we had a year with no live football. I shot last season’s one and only Stanford home football game with no one in the stands, which was a very strange experience. I’m always thinking about what it’s going to be like this year and what I would like to do with that opportunity—because it really is a privilege to have that opportunity.