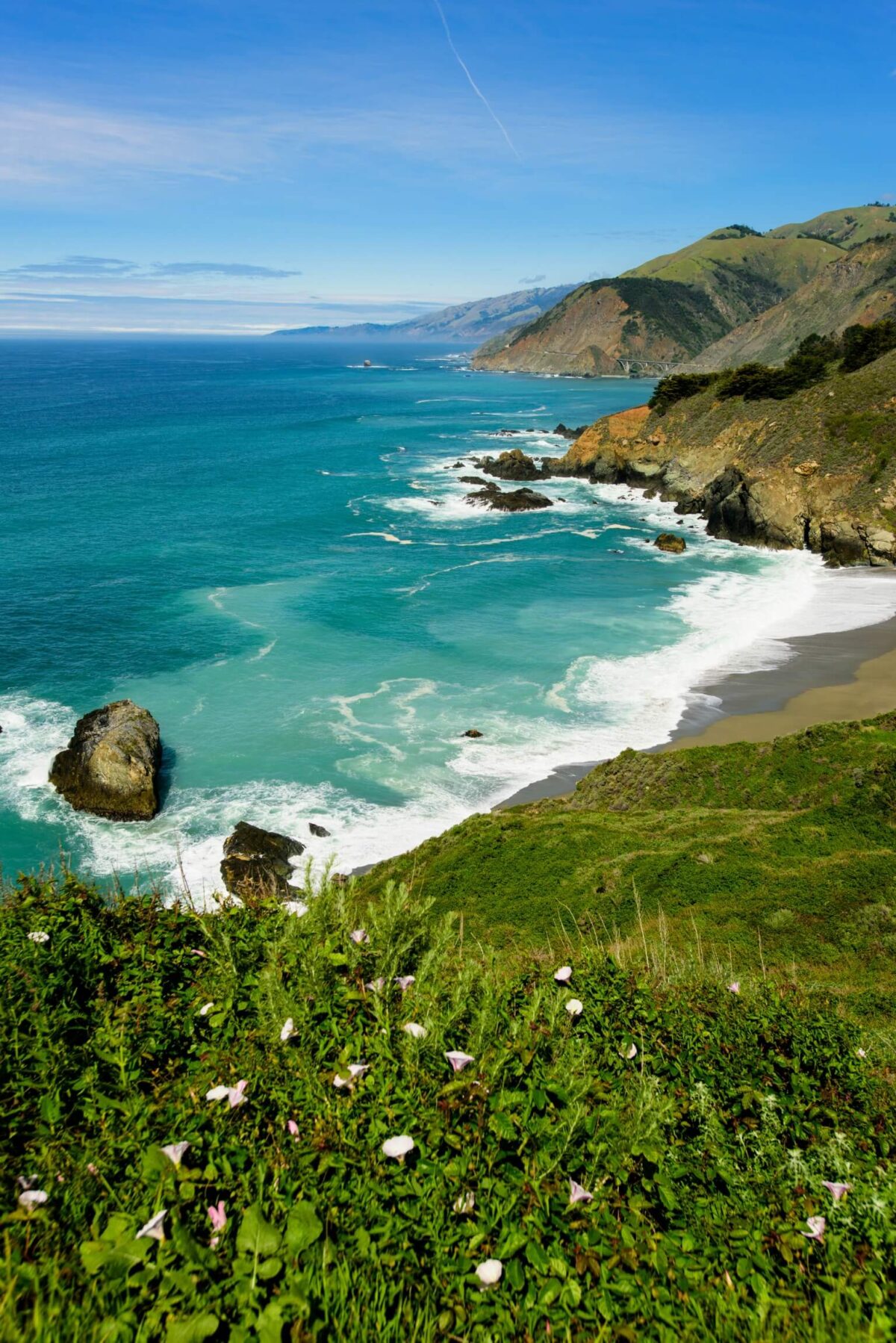 It’s very likely you’ve explored Cannery Row, perhaps taken in the Monterey Jazz Festival or hunkered down in the aquarium mesmerized by the jellyfish exhibit. Monterey, and its companion Carmel, are big tourist draws for a reason. Deep sea fishing, golf, literary lore and the scenery and vibe—which has drawn artists since the 19th century—are undeniable attractions, but if you dig a little deeper, an even bigger bounty reveals itself.

So Much to Do

Although it’s still technically winter for most of March, the odds are good for sunny skies and temperate weather, which is a boon for activities like biking, water sports and hiking. Known as a golf mecca, many flock to the area to play and watch tournaments. If you have a few days, a mix of indoor and outdoor is the way to go. One of the many benefits of having our son in college at UC Santa Cruz is that we now have an excuse to regularly explore the region. Heading south from Monterey along the coast, we had a plan to hike in Point Lobos State Natural Reserve, but hordes of non-hikers swarming the entrance shifted our direction to Garrapata State Park. We will definitely get back to Point Lobos, but Garrapata is a bit of a hidden gem—divine and much less crowded—with two miles of beachfront, coastal hiking and a 50-foot climb to a stunning vista. We kept an eye out for whales and had a ball exploring tidepools teeming with smaller sea creatures. March is an especially scenic time to visit, with wildflowers in glorious bloom. When I posted pictures of our little walk, a Spanish-speaking friend of Uruguayan descent commented that the name of the park means “tick”—this seemed slightly off-putting given the unfortunate association with Lyme disease. A little more research found that the term “Garrapata” might also be Spanish slang—in certain countries—for hippie or “long-haired one,” which would make sense given the proximity to Big Sur and the Esalen Institute and Hot Springs. Maybe it really is just “TIck State Park.” Either way, we did do full body checks after the hike. With young kids, the Monterey Bay Aquarium and popular Dennis the Menace Playground are de rigueur stops. Although paying homage to the namesake comic book character, this is not a playground for helicopter parents. Kids race around, defying gravity and no matter how spry, parents, grandparents and caregivers will have a hard time keeping up. Sadly, the 1924 Southern Pacific steam engine my kids loved to board is now roped off because of liability. Built on the site of a defunct sardine cannery, the Monterey Aquarium is world renowned for its focus on marine habitats of the Monterey Bay, kelp forests, pioneering animal husbandry and sustainable seafood research. If you have never explored the aquarium, it is a must—particularly the otters and jellyfish. Each time we go, we buy a membership because a one-time ticket costs almost as much. Alas, we never seem to make it back in the same calendar year, but there’s plenty to see, many times over. Admission is pricey, so plan to spend all day communing with the delightful otters, intriguing octopi and playful penguins.

For the adults, exploring the local galleries and art scene is always an inviting pastime, along with the possibility of catching a plein air art competition. March also offers a slew of enticing events in the area. Over March 1-3, Jazz Bash by the Bay at the Monterey Conference Center provides a wall-to-wall festival weekend of traditional jazz and swing. Relais & Châteaux GourmetFest is a four-day foodie extravaganza happening March 14-17 in Carmel-by-the-Sea. And, for jaw-dropping aeronautical acrobatics, mark your calendar for March 23-24 to catch the California International Airshow at the Salinas Municipal Airport.

The Monterey Plaza Hotel & Spa is centrally located and just a stone’s throw from the aquarium and Cannery Row. With 290 rooms, half with ocean views, it’s magical to be lulled to sleep with the sound of the waves below. Their swanky suites have hosted the likes of Jerry Seinfeld, Oprah Winfrey and President Barack Obama. A scrumptious seafood dinner at the hotel’s restaurant, Schooners Coastal Kitchen & Bar, felt like we were on a cruise ship. Try to get there for dusk, as watching the sun set over the bay is priceless and even better with a cocktail in hand. Fresh local oysters, scallops and grilled octopus amplified our Cannery Row mojo; we were talked into a sharing a delectable raspberry sorbet with fresh fruit. And to cap off the evening, the best hot toddy I’ve ever had. In the morning I hung out on our balcony looking for otters with the handy binoculars conveniently placed in each room. Then, we enjoyed coffee and home-baked scones—patiently eyed by a seagull friend—from the newly-renovated Tidal Coffee while soaking up some vitamin D in front of a dazzling fire pit. Next, we headed to the Vista Blue Spa, perched on a rooftop deck overlooking the bay. A “Bliss on the Bay” treatment included a dry brushing, body polish and oil massage. We lingered on the outdoor deck, and the warm winter sun penetrated deeply after such a relaxing treatment. On another recent visit, we booked an overnight at the charming Hotel Pacific in the center of town and decided to roam on foot. We hoofed it to the Pacific House, an adobe structure with exhibits telling the story of Monterey when it was the capital of Spanish and Mexican California. The small museum was enchanting and kept two teens and their parents all interested. Small, interactive and free, the collection was a nice combination of native, natural and socio/ cultural history of the area.

If you’re looking to go more rustic, options include camping in the area, glamping at Costanoa Lodge or maybe even a lighthouse stay up the coast at Pigeon Point Hostel. It is perched on a cliff, and a dip in the hot tub is literally breathtaking.

Driving back up the coast from Monterey, we always stop in Moss Landing. One of our favorite—albeit touristy—restaurants, Phil’s Fish Market, and a seafood smorgasbord, left us feeling as full as a tick after a feast. The area is also near Castroville, the artichoke capital of the world. You can find several fruit and vegetable stands in the area. Getting local harvests like ‘chokes and avocados—sometimes 10 for a dollar—makes the detour worth it. Be sure to sample some artichoke soup as you meander home. Whale City Bakery in Davenport on Highway 1 is a popular stop for cyclists. They have fresh-baked breads and serve up breakfast, lunch and dinner. And finally, you’ll want to pull up in Pescadero. The Pie Ranch Farm Stand has seasonal offerings and you guessed it—fabulous pies. My favorite rotates, depending on the season: strawberry rhubarb, peach, berry-—they are all great, especially à la mode. It’s always a sweet way to top off a Monterey Coast getaway weekend.