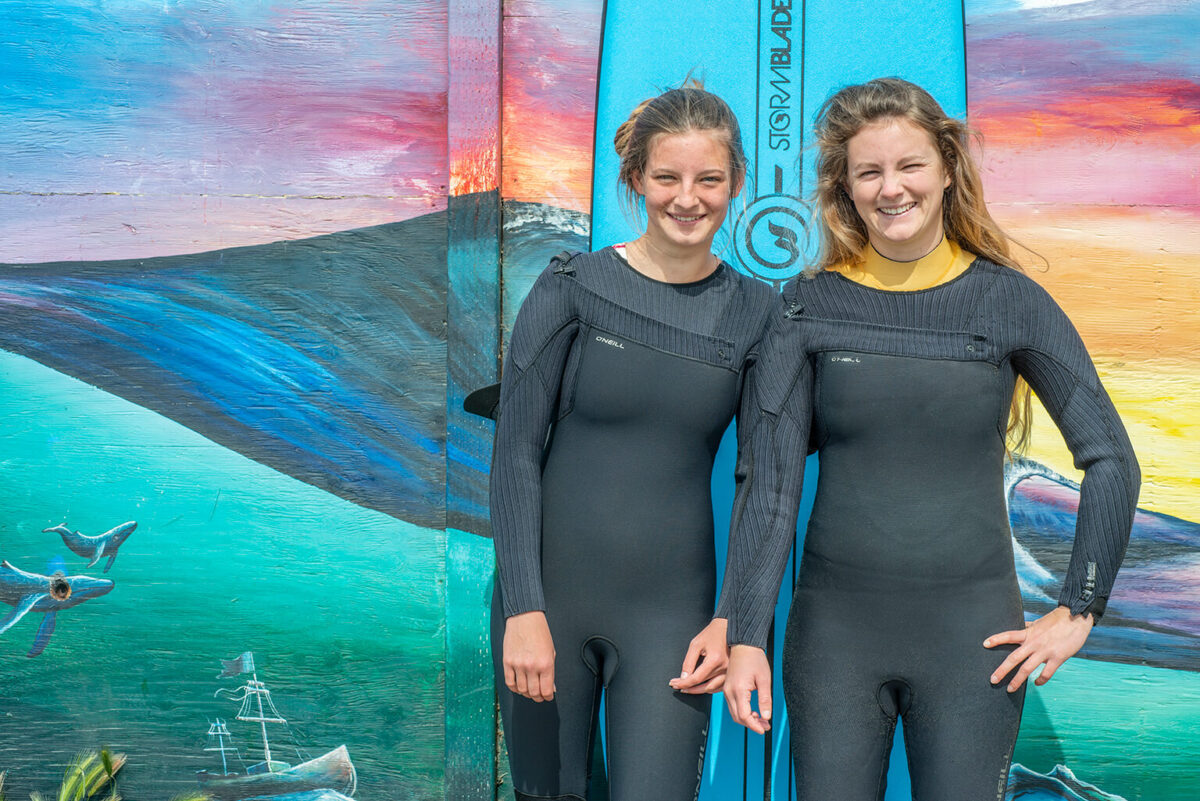 On a cool, sunny day at Surfer’s Beach in El Granada, Ella Catalano-Dockins, the owner of Blue Swell Surf School, gathers a group of beginners around her. “You have to believe you can stand up,” she encourages. “It takes confidence to make it happen.”

At just 20 years old, Ella is young to be heading up a business that teaches groups and individuals of any age to catch waves, but she has years of valuable experience behind her. A successful competitive surfer throughout her teen years, Ella started surfing for the Half Moon Bay school district when she was 11 and is a former instructor at Pillar Point Harbor Surf School.

Now, having launched Blue Swell Surf School with her sister Lily and her mother Cristina, she runs the only women-owned and -operated surf school on the San Mateo County coast. “I feel like that makes us special,” Ella states, adding that she is ready to share her deep love of surfing with a larger population. “I just start where people are comfortable and work from there. Surfing is for everyone.” 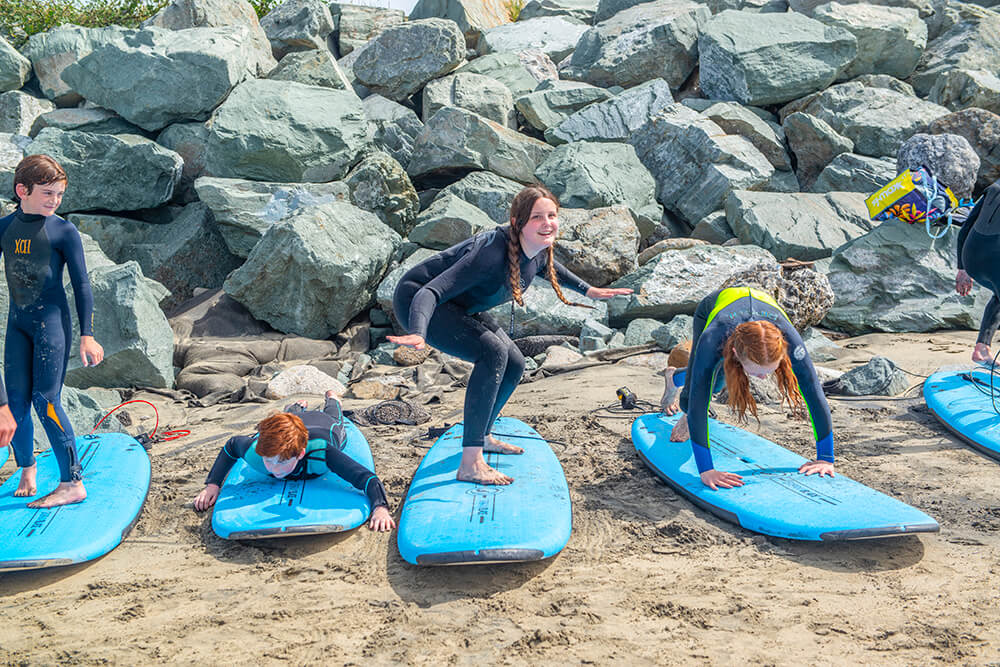 Ella’s coastal roots run both local and deep. “We grew up here. My grandparents still live in the house my dad was raised in. Montara Beach was our playground, and I remember my mom making me run up and down the dunes to wear me out when I was a kid,” she says. Ella adds that her mother is originally from Sarasota. “So I have beach people on both sides of my family,” she notes with a smile.

In spite of those early ties to beach life, Ella didn’t gravitate to surfing until she broke her arm when she was ten. “I couldn’t play softball anymore,” she recounts. “It was a year before I could hit a ball again, so I was bouncing off the walls.” Her dad sent her to the beach with Ion Banner, a longtime family friend and Mavericks legend whom she credits with helping shift her focus. “Anything new I’ve ever done on the water, from jet ski rescues to toe surfing, he’s been there to support me,” she says.

Ella grew her confidence in the water at Junior Lifeguards of Half Moon Bay, a demanding summer program where kids aged 9 to 15 learn the critical elements of water safety. “I learned all the important basics,” she summarizes. “How to rescue, doing CPR, what to pay attention to when you’re on the water, like swells and riptides.” As a young teenager, she critically put those skills to use: “I saved a guy’s life when I was 13. I still see him around all the time. I’m glad to know I can perform a rescue under real pressure.”

While attending Mercy Burlingame High School, Ella surfed for Half Moon Bay High under coaches Carrie Kemp and Mike Wallace. She was one of only two girls on a team of about 15. In her freshman year, she placed fifth in the state championship. “Everyone was a head or two taller than me. They were all seniors. The waves were huge and terrifying, but I would just go for it,” Ella recalls. “I’ll never give up that trophy.” 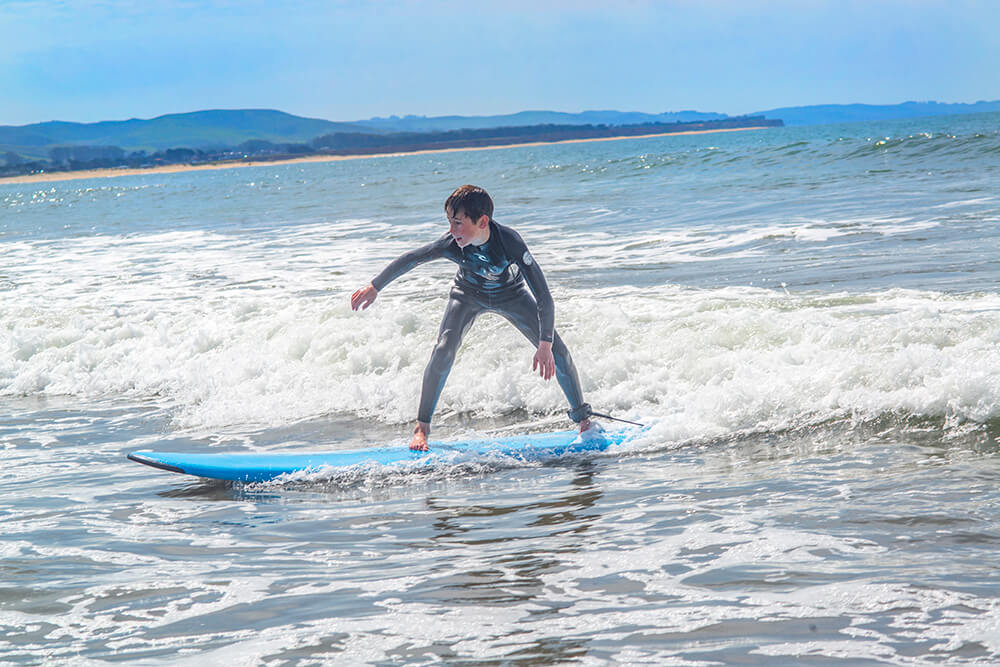 Ella compounded her success by winning first place in Pacifica’s Big Chill Out Longboard Contest in 2017 and in the Women on Waves Longboard Contest in Santa Cruz in 2018. But as she examined the life of professional surfing, she experienced doubts about her place in that world. “I just couldn’t figure out how to have enough money to stay in Portugal for two weeks waiting to surf,” she admits. “I’m a competitive person, but at the end of the day, I surf because it makes me happy.”

In the midst of juggling two jobs while attending Skyline Community College, Ella was alerted by the owner of The Mavericks Experience where she worked that he was ready to sell the surf school. He wondered if she’d be interested in purchasing it. Ella took the offer to her family. “My mom and dad have been in partnership running a construction company for years,” she shares. “They understood how to go about setting up a business.”

The basic elements came together quickly. Ella’s mother designed the website and suggested the name, and her sister created the logo and supports Ella in group lessons. She’s had the business up and running for private and group lessons since November and is planning a full roster of camps for the summer.

Though Ella pursued surfing ferociously, she has little interest in turning out professional athletes as an instructor. Instead, she hopes she can foster the same satisfaction she finds every day when she heads out with her board under her arm. “The most consistent thing in my life is that when I surf, I have a better day,” she explains. “When I see that joy in my students, it’s everything.” 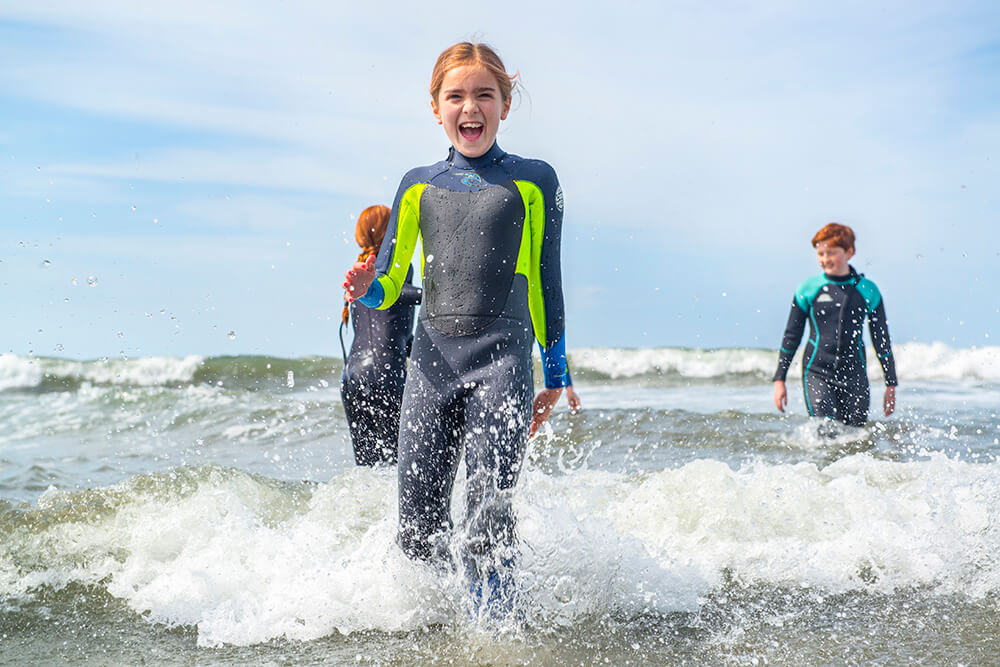 Blue Swell Surf School’s lessons begin on the beach with basic stretches and a couple of practice attempts at ‘pop-ups’—a quick jump from belly to board to fully upright. Once in the water, Ella directs you into a wave and you get a shot at catching it. “You don’t realize how tiring it’s going to be until you’re in there,” she acknowledges. “The board is hard to control. You have to learn to work with it so you don’t lose your energy.” Under Ella’s expert guidance, over the course of an hour and half lesson, students start to feel that cresting a wave with the board still under them is within reach. “It takes time, but eventually, everyone will stand up,” Ella says. “And it’s the best when you give someone a chance at that thrill.”

According to Ella, aside from confidence, the most critical element for successful surfing is balance: “Moving a tiny smidge up or down your board can make a huge difference in your stability.” Now, as a student majoring in marine biology and a fledgling business owner, she recognizes the need to cultivate that same balance in her life. “I’m definitely juggling a lot of pieces right now,” she admits. But Ella keeps herself anchored to her deepest purpose. “When I surf, it makes me happy, and I leave my problems behind,” she reflects. “I have a love for the ocean that’s never going to end.”