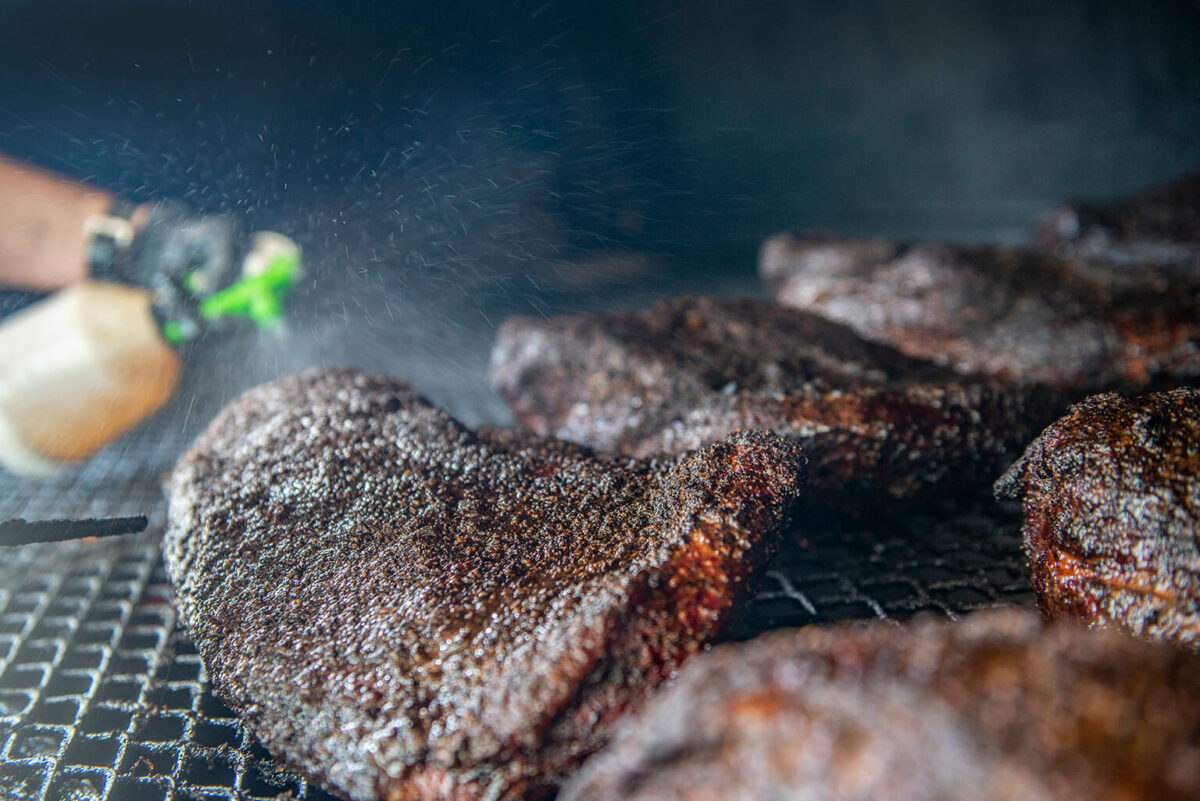 Hailing from the San Mateo County coastal town of El Granada, Wyatt Fields is a self-proclaimed barbecue nerd. For the last ten years, he’s been devoted to his passion for better barbecue. But his obsession with open-flame cooking dates back to his middle school days when he went on a surfing trip down to Baja. “There was a rusty grill one of the dads was cooking chicken on and I loved everything about it, from the smell to the gathering of people,” Wyatt recalls. “At one point, he had to run out for something and left me in charge. That responsibility was something I loved and still remember. I flipped the chicken way too much but I didn’t burn it!”

That instant affinity led Wyatt to begin working in the food service industry as a teenager. Unable to afford formal culinary training, he learned whatever he could by doing just about every job in a professional kitchen. In addition to taking on roles ranging from butcher to bartender, Wyatt also interned with French chefs to learn the most refined fine dining skills. Through it all, he continued to obsessively research and test barbecue techniques, learning how to slow-smoke meat on an offset grill. “I’d always buy a big chunk of brisket and write the experience in my diary,” he shares. “Everything from the temperature to the fuel I used.” 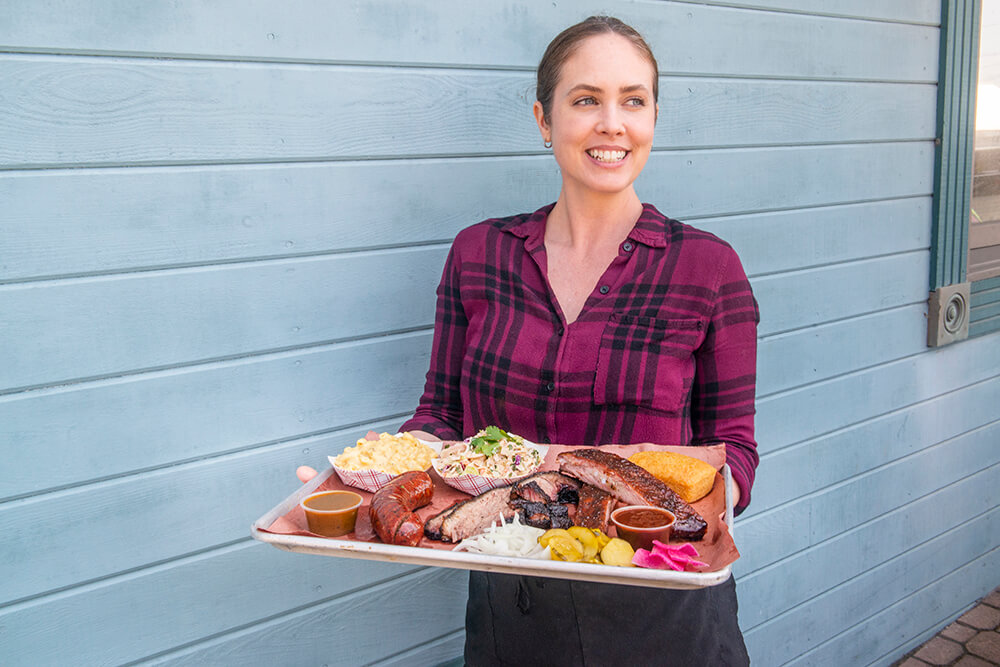 In 2013, Wyatt formed his first catering company, offering what he called an ‘elevated barbecue experience,’ which hooked him completely. “The feeling of community is what originally drew me in,” he reflects. “It was just so awesome seeing the unpretentiousness of open-air cooking.” In 2019, recognizing the need for a barbecue joint along the coast, Wyatt set out to create a more permanent operation in his hometown, where he forged lifetime friendships and caught his first wave. For Wyatt, Breakwater Barbecue also represented a way to give back. “I grew up in this area and I want the community to feel like this is their place where they can share food with family and friends,” he says.

Located about 10 minutes north of Half Moon Bay, Breakwater’s space is cozy yet airy and includes a large counter so customers can see the butcher cutting the various slabs of barbecue meats. Time it just right, and they’ll even slice you a fresh piece to sample that’s warm, smoky and perfectly spiced. Wyatt’s brand of craft barbecue combines the best of everything he’s learned over the years. He doesn’t use shortcuts—from sauces to sides, it’s all made from scratch. 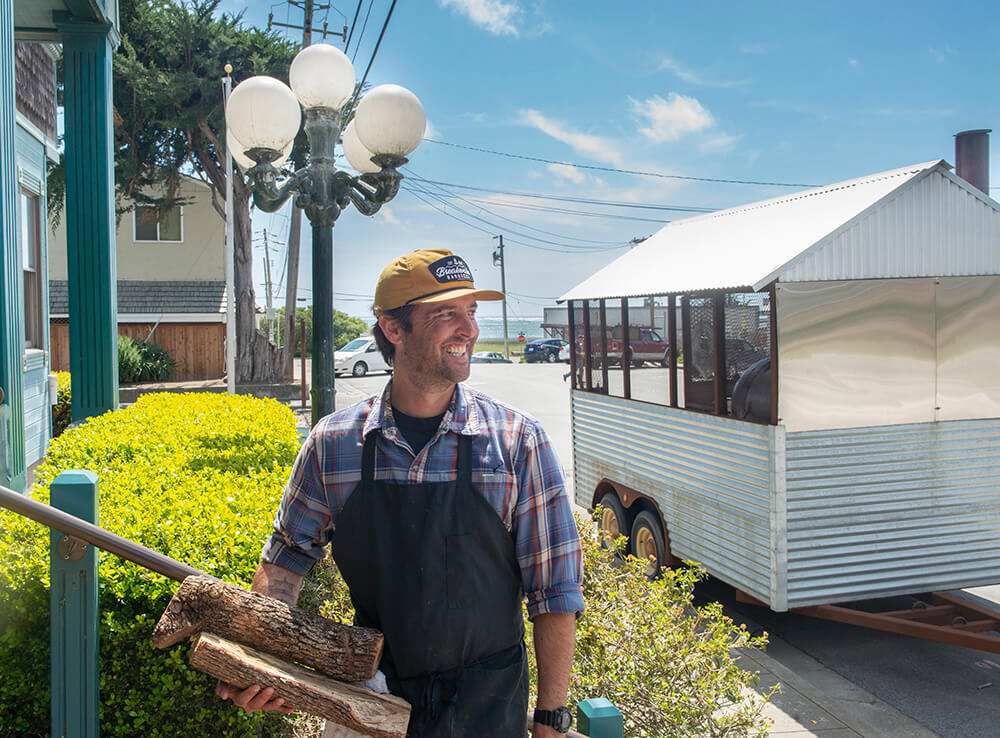 Wyatt’s hand-trimmed beef brisket uses a Texas-style dry rub, while his pulled pork uses a South Carolina-style mustard-based sauce. Brisket trimmings go into the sausages, which take three days to make. Wyatt sources coastal oak for the wood, using an offset stick burner instead of the more common electric smoker. “We’re doing barbecue the way it should be,” he asserts. “You have to watch the fire, monitor the temperature and really know your wood.”

Wyatt claims that making good barbecue is more a feeling than timing. “It’s not about fall off the bone, it’s about the pull of the meat,” he explains, adding that this labor-intensive process is not for the faint of heart. “If you don’t love barbecue, you have no place running a business like this.”
The result is handcrafted meats that are perfectly smoked, full-flavored and ridiculously tender and juicy. “People are noticing the difference. You come here and you realize that this is what barbecue should be,” Wyatt states proudly. 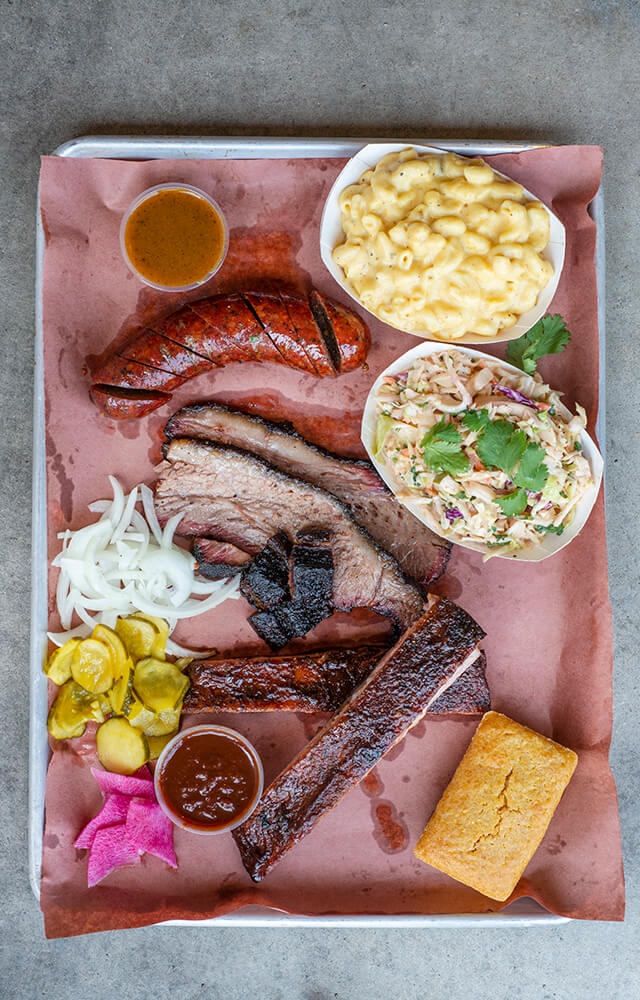 Currently, folks can grab a beer and watch a game in the restaurant’s corner bar area where Wyatt hopes to someday also offer fish tacos, taking advantage of the area’s fresh seafood. Special menu items like the smoked Gold Rush dry rub half-chicken or cider and herb smoked turkey breast are only available on weekends. Breakwater is open Thursday to Sunday 11AM-6PM, and Wyatt realizes some customers may be unfamiliar with the barbecue culture of selling until the meat is all gone. He recommends pre-ordering either online or by phone to avoid being disappointed.

“I know the term has been diluted, but in California where barbecue isn’t as big as it is in other parts of the country, it’s important to say this is ‘craft barbecue,’” he relays. “In Texas, they’ll frown if you say that. But what’s cool is that now people are seeking out the spots that are doing this kind of craft barbecue. I never thought in my wildest dreams I’d be here doing this.”