Photos by Frances Freyberg and Robb Most 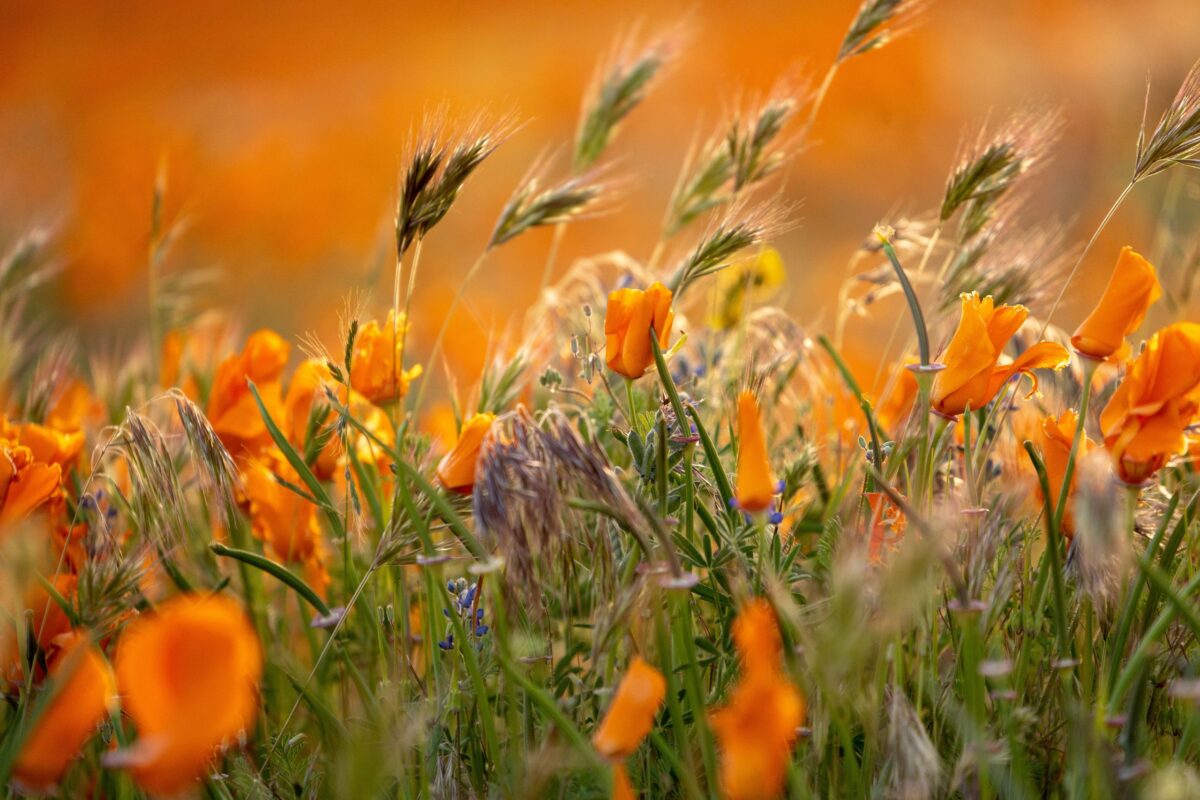 March heralds the beginning of wildflower season on the Peninsula. The good news is that spring blooms can be viewed at numerous nearby preserves, offering flower fanciers both easy jaunts and real leg stretchers. Head to the ridgetops or stay closer to sea level, take your pick!

Peninsula Open Space Trust (POST) offers a downloadable guide to 30 local wildflowers. Before you head out, make sure to visit openspacetrust.org/wildflowers, so you’ll know whether you’re feasting your eyes on a seaside daisy, California fuchsia or coyote mint.

Here are some of our favorite scenic hikes, accompanied by a hint of what you’ll see, thanks to photographers Robb Most and Frances Freyberg. Of note: Frances will be exhibiting flower photos from nearby locales at the Portola Art Gallery in May—learn more in the May issue of PUNCH. 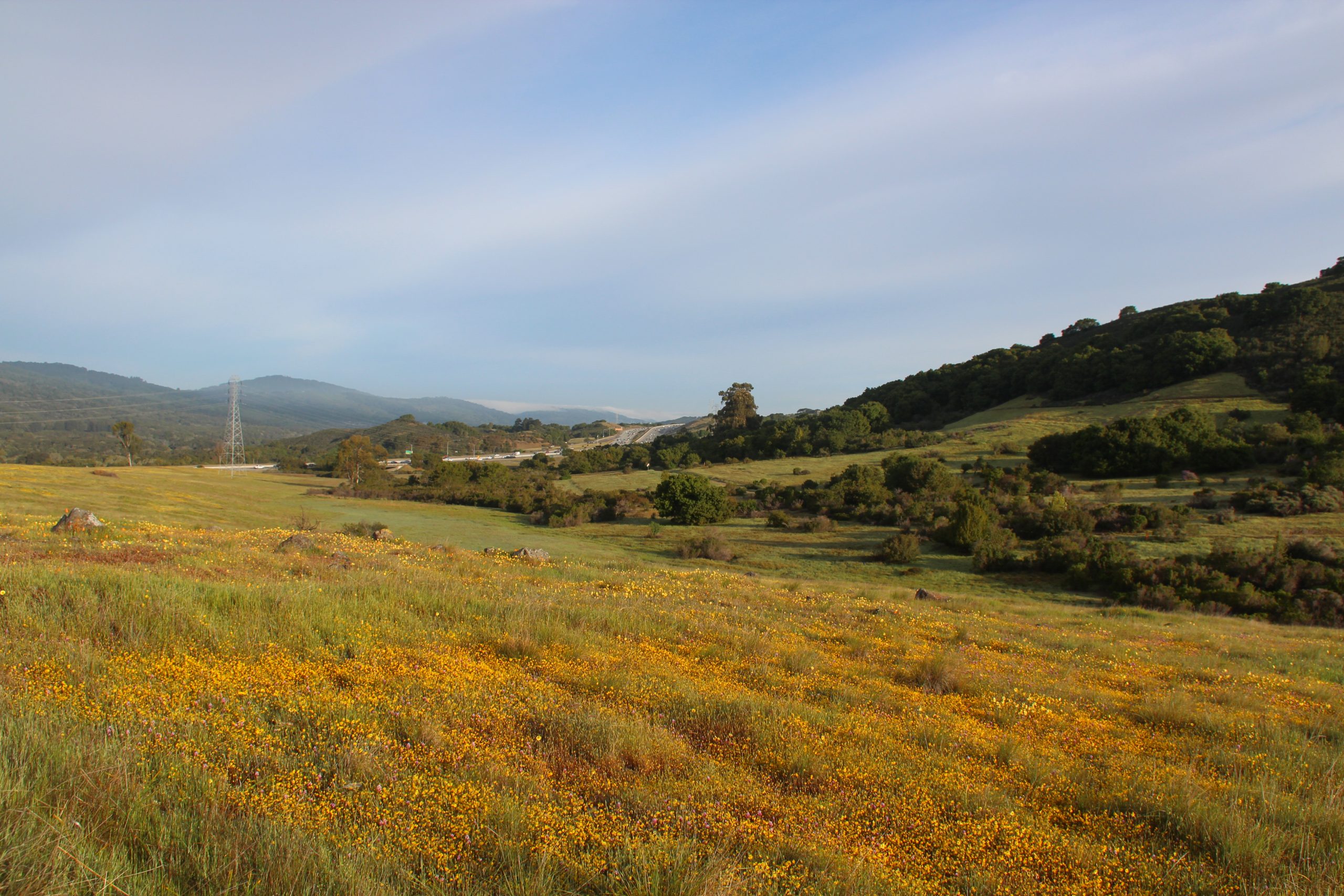 If you’re a 280 commuter, you’re undoubtedly familiar with this very showy springtime treat. Edgewood Park boasts an endless carpet of wildflowers amidst its serpentine grasslands.

The 467-acre park has 10 miles of trails, and you can choose from a number of loops. Or, for easy access to wildflowers, park along Cañada Road just south of Edgewood Boulevard and enter the park via the Clarkia Trailhead.

What makes the wildflower display at Edgewood unique is that its serpentine soil normally inhibits plant growth. Thankfully, a number of mostly low-growing plants have adapted. They include blow-wives, blue dicks, California lomatium, California plantain, goldfields and serpentine linanthus.

Starting March 14, docents will be leading free wildflower walks on Saturday and Sunday mornings at 10AM through June 7. Departing from the main parking lot, the three-mile routes vary according to what’s in bloom. Groups of 10 or more need a reservation but otherwise it’s first-come, first-served. In addition, on Saturdays from April 4-25, tours will also start at the Clarkia Trailhead at 10AM. 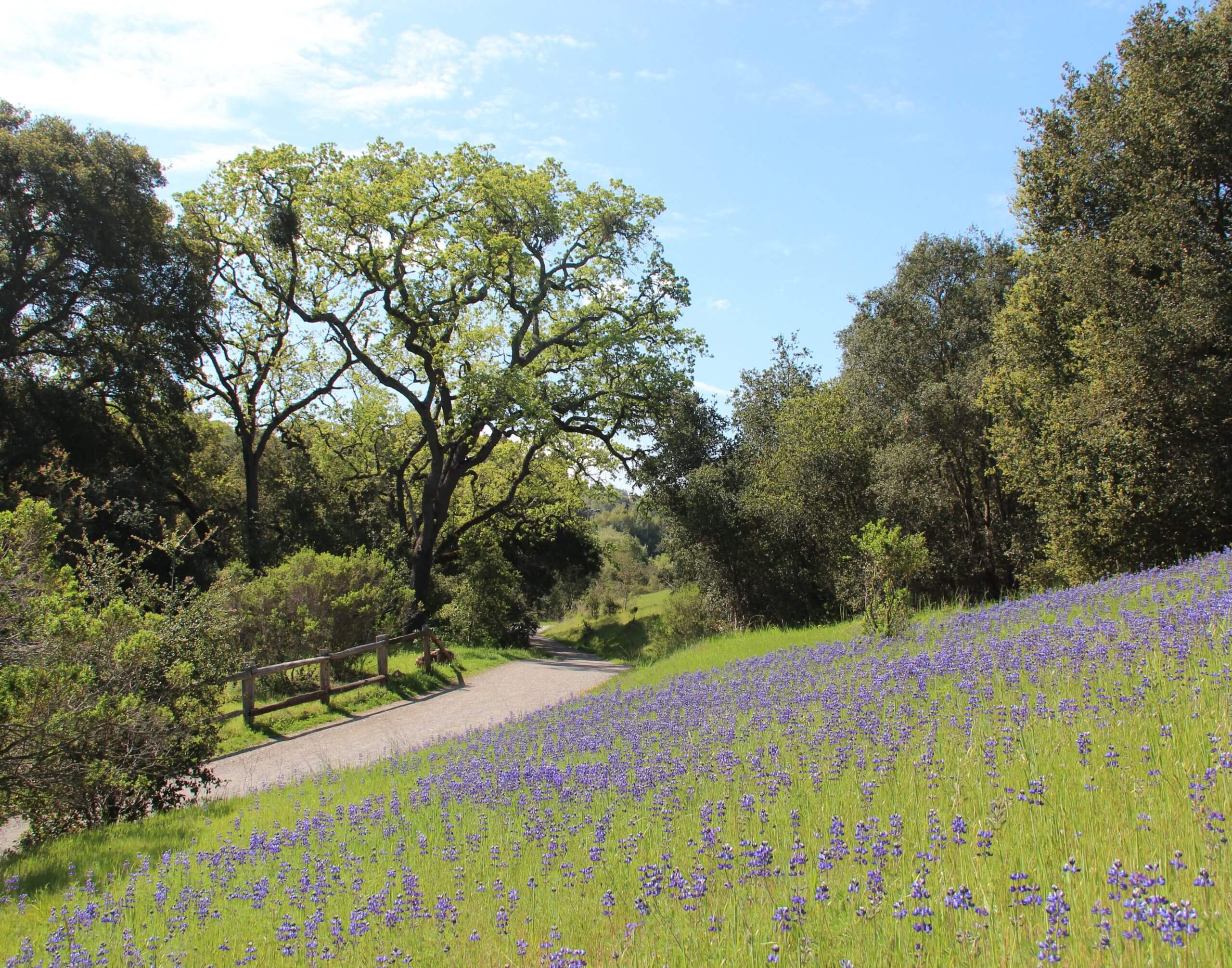 Another option for easy wildflower viewing is the Enid Pearson-Arastradero Preserve, which offers 533 acres of land that was protected from development in the 1970s thanks to the city of Palo Alto. The Preserve is noted for its rolling savanna grassland and broadleaf evergreen forest with no elevation over 775 feet.

Among its 10.25 miles of hiking trails, the grassland areas above and beyond Arastradero Lake boast the best wildflower displays. You’ll see California poppies, lupine, thistle and wild pea on the Juan Bautista de Anza and Meadowlark Trails.

Of note: Mountain lion warnings are often posted at Arastradero as it’s part of their local habitat. They’re a good reminder to keep dogs on leash and children close to you. In years and years of hiking there, we’ve never seen a mountain lion, although we did spot a bobcat once and have seen rattlesnakes later in the spring. 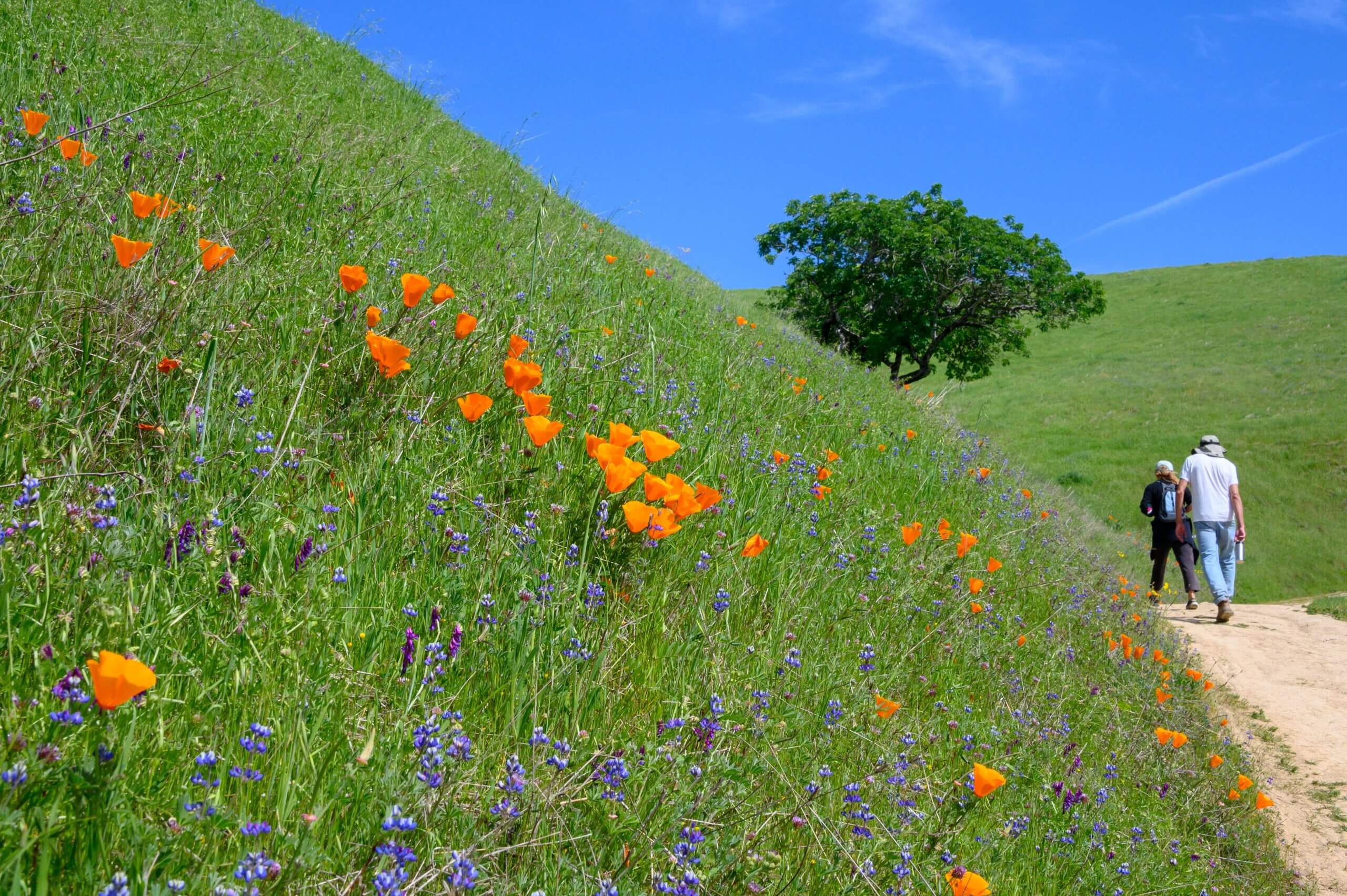 Russian Ridge also boasts the highest point in San Mateo County—Borel Hill at 2,572 feet with 360-degree views. Just a half-mile from the park entrance, it is named for Swiss banker Antonio Borel who lived there at the turn of the 20th century and helped create the Crystal Springs Reservoir to the north.

There are 10.4 miles of hiking trails to choose from, with some trails shared with cyclists and equestrians. You can mark the season at the Peninsula Open Space Trust Council Circle by standing on the brass marker and seeing where your shadow lands. The Circle honors Audrey Rust who served as president of POST. 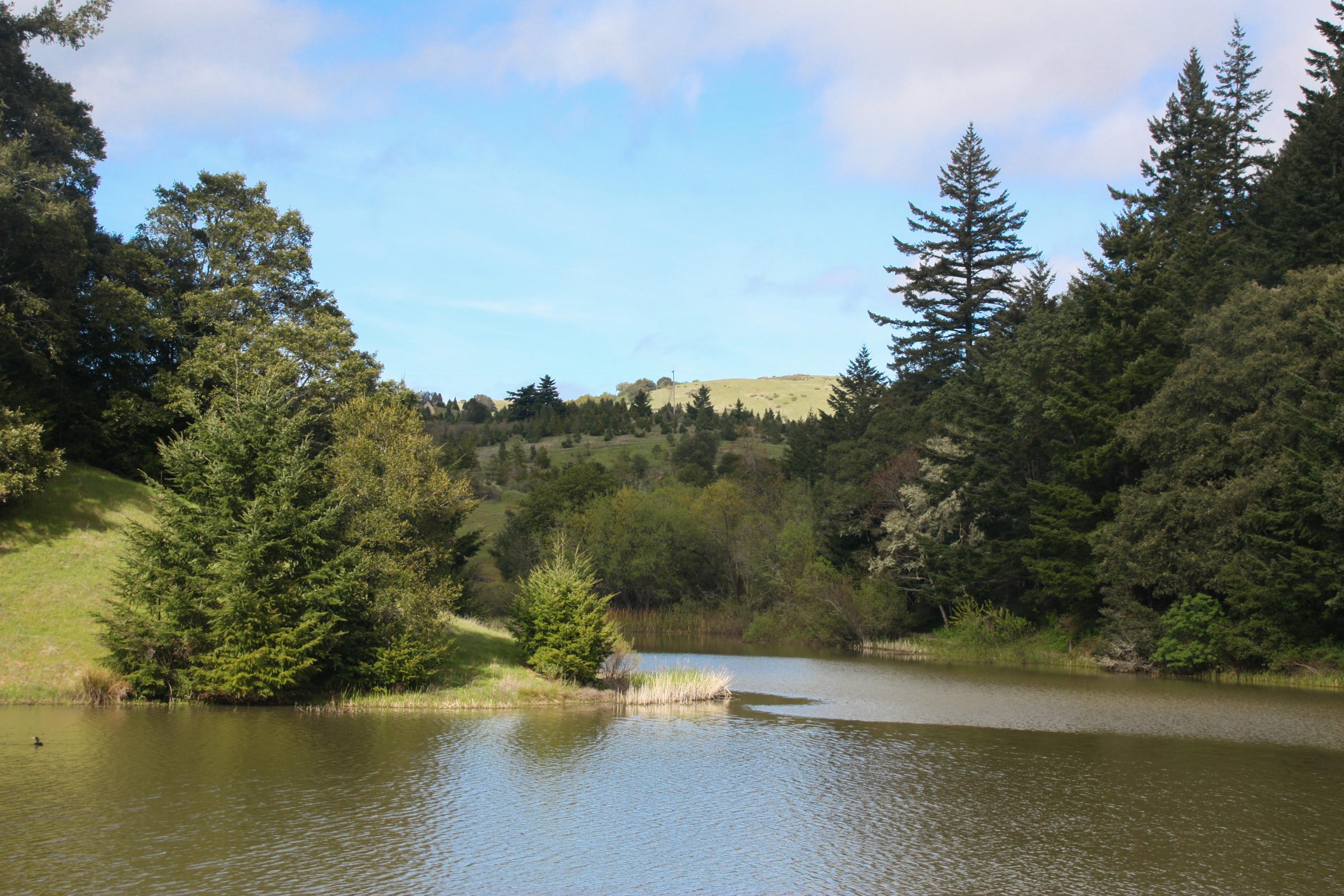 At over 2,000 acres, Skyline Ridge Preserve features not only great views from its ridgetops but also comes with its very own lake.

Once owned by James Ralph, Jr., aka “Sunny Jim”—who served as both mayor of San Francisco and governor of California—a fun fact for long-time Peninsula residents is that it was subsequently owned by John Rickey, who used it as a hog ranch. Mr. Rickey was the owner of three much-loved restaurants in south Palo Alto: Rickey’s Studio Inn, Rick’s Swiss Chalet and Dinah’s Shack. Dinah’s Shack remains in the form of Dinah’s Garden Hotel while the other “Rickeys” were torn down for housing in 2005.

Amongst its 10 miles of trails, the grassland trails—Sunny Jim and Ipiwa—provide seasonal wildflower viewing as does the 1.3-mile loop around Horseshoe Lake, which was constructed in the 1950s to provide water for ranching and agricultural operations. Depending on the month, you’ll see milkmaids, Pacific hound’s tongue, Henderson’s shooting star, miniature lupine and giant wakerobin trillium.

Besides its lake, unique to this preserve are two multimedia nature tours, a family-friendly jaunt around Alpine Pond and a longer, two-mile hike that features four different habitat types.