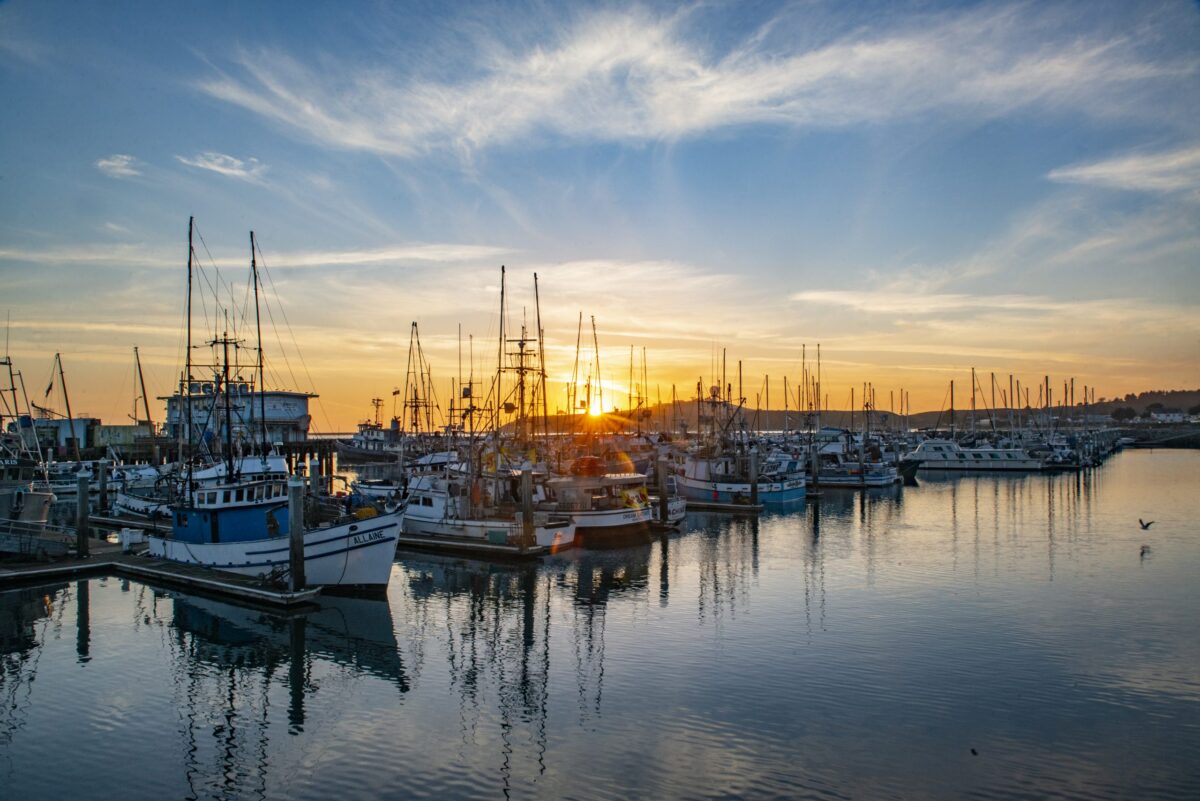 On a sunny Sunday morning at Pillar Point Harbor, light dances off the surface of the water, and a wide arc of clouds ripples to the hard line of the horizon. Sports fishermen drop their small crab pots over the rail, while the ocean slaps the sides of boats and sea lions bark from the shady underpinnings of Johnson’s Pier. Looking further out, you’ll see waves crashing into the sides of the riprap jetty that shelters this natural harbor from the relentless sea. At a passing glance, this harbor may look like any one of the many scenic marinas decorating the West Coast, but when you look beneath the surface of Pillar Point, you will discover a busy village of fishermen and women committed to catching premium seafood sustainably. 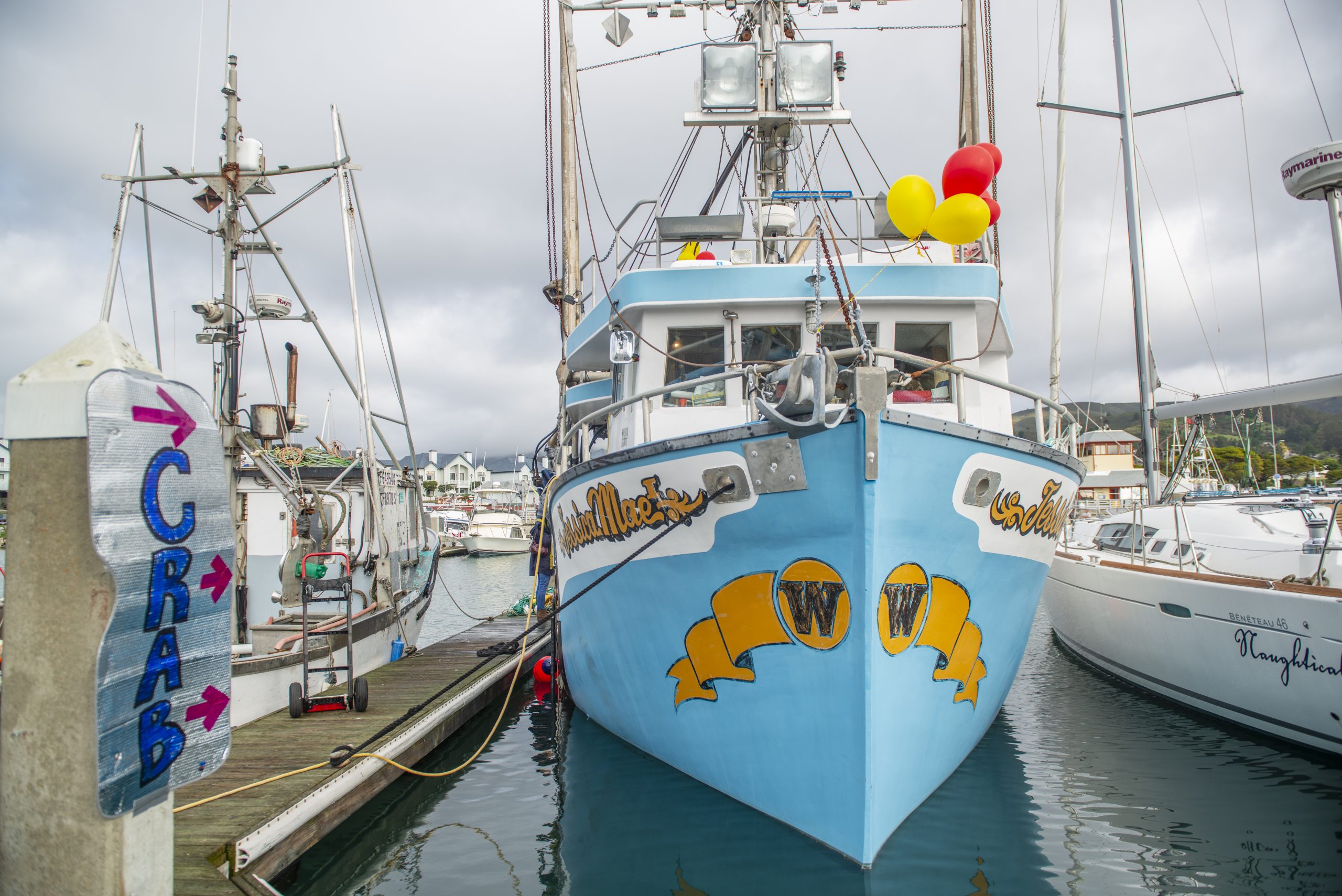 Pillar Point Harbor, situated at the northern edge of Half Moon Bay, is one of the coast’s most active commercial fisheries and, uniquely, allows customers to buy directly off the fishing boats. “We have 369 slips here, and about two-thirds are active commercial fishermen and the rest are recreational boaters,” says harbor master Chris Tibbe, who, along with his team, is responsible for everything from policing the docks to overseeing facilities. A reef system just past the breakwater and unpredictable seas are part of what makes this harbor more challenging than most. “The weather systems we have here can be very extreme,” the harbor master notes. “It’s not the easiest to maneuver in and out of, and it does tend to separate a new boater from the more experienced.” The professional fishermen and women of Pillar Point face the adversity of the tumultuous sea every day, taking pride in being a part of this vital working pier. 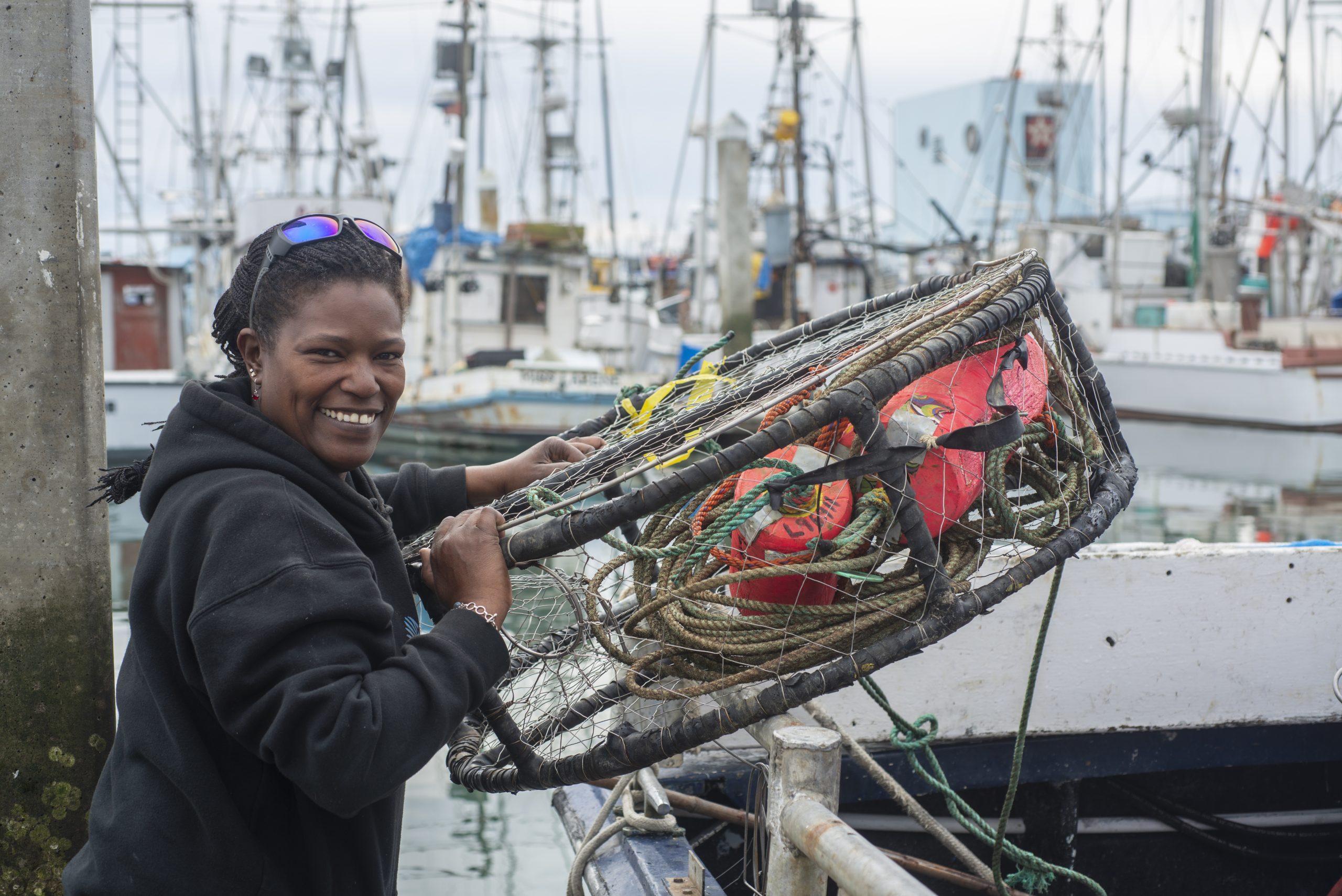 When you walk around the harbor you’ll see everything from large, well-maintained crafts to beat-up skiffs bearing the dings and scars of their long lives at sea. Chris enjoys the non-stop activity. “I got here this morning at five o’clock and there were already forklifts driving up and down with bait, and boats were coming and going,” he says. “Because we operate 24 hours a day, 7 days a week, 365 days a year at this harbor, it’s just so cool to see that kind of activity at three, four o’clock in the morning. We get it done.”

As well as enjoying the stunning views and the whirl of activity, customers who frequent Pillar Point can feel confident that they’re doing their part to support sustainable fishing. This year, the fishermen are recovering from a late start to crab season due to whale entanglements. Although this affects these small business owners’ bottom lines, they accept that delays are necessary in order to maintain the health of the harbor. “Fishermen are the stewards of the sea,” explains Robbi Edwards, who provides port support, including running sales, for the Jessica Mae 1. “If they need to start late to avoid whale entanglements, they’re happy to do that.” Lance Govia, skipper on the Jessica Mae 1, started off as a boat builder in Seattle before taking to the seas himself. He nods in agreement, “If we don’t do it right, there won’t be any fish in the future. It’s our livelihood.”

For the fishermen of Pillar Point, doing their part to protect the ocean while providing their customers with excellent seafood aren’t mutually exclusive endeavors. Kerry Davis, captain of the Bare Bones, carefully moves a crab with a missing leg to another tank, and then he takes a seat on the sunny deck of his boat, waiting for his next customer. “I try not to overfish,” he says. “I like to sell out the day they’re caught. I like to be able to tell customers, ‘I just caught them this morning.’” 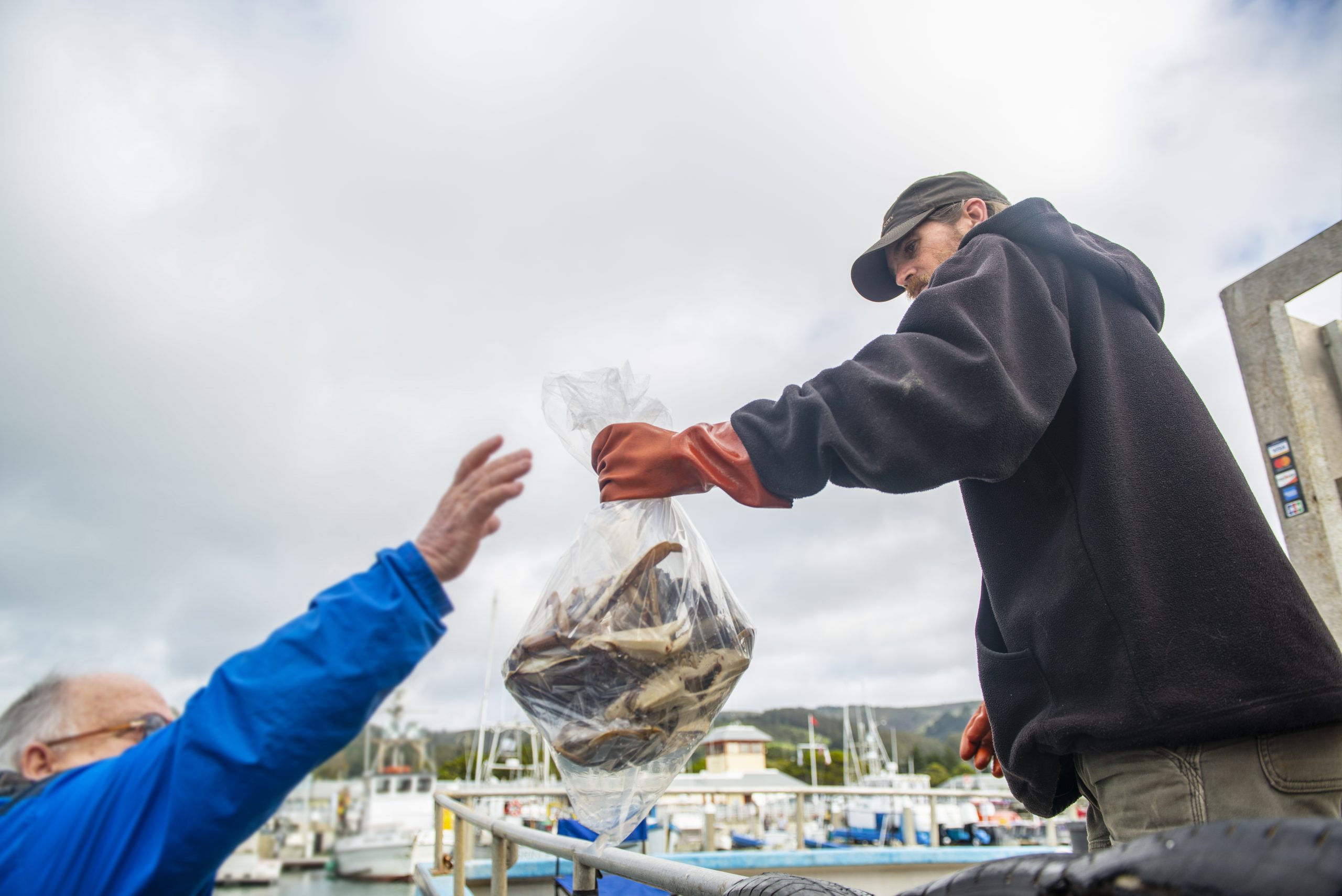 Fishing, even for the seasoned pros you meet at Pillar Point, is demanding physical labor and, sometimes, downright dangerous. Erica Clarkson was a crew member on the Ocean Gale at the beginning of crab season when the boat suffered a mechanical failure and caught on fire. “It was never a panic situation,” she recounts. “Terrifying, yes, but because of quick thinking we were able to keep it moving. This is the situation, here is how you respond.” Erica snaps her fingers to indicate making one quick, lifesaving decision after another. “We got one flare off. One call out. And that was it.” The Ocean Gale caught fire close to the harbor, and nearby fishermen responded immediately. “Everybody came running in our direction,” Erica says. Ultimately, the Smith Brothers No. 2 was able to rescue the entire crew. “They got between us and the burning boat, and pulled us on board, so we never got in the water. We were extremely lucky in that.”

You may think a boat burning to the water line would be enough to deter you from making a living fishing, but the ocean has an addictive power. Erica, who first started fishing with her family when she was a girl, never considered abandoning the sea in spite of the dangers and difficulties. “It’s organized chaos, but we live in paradise. I don’t want to live anywhere else,” she says emphatically, looking out over the edge of the pier to the boats moored below. “I don’t want to do anything else.” 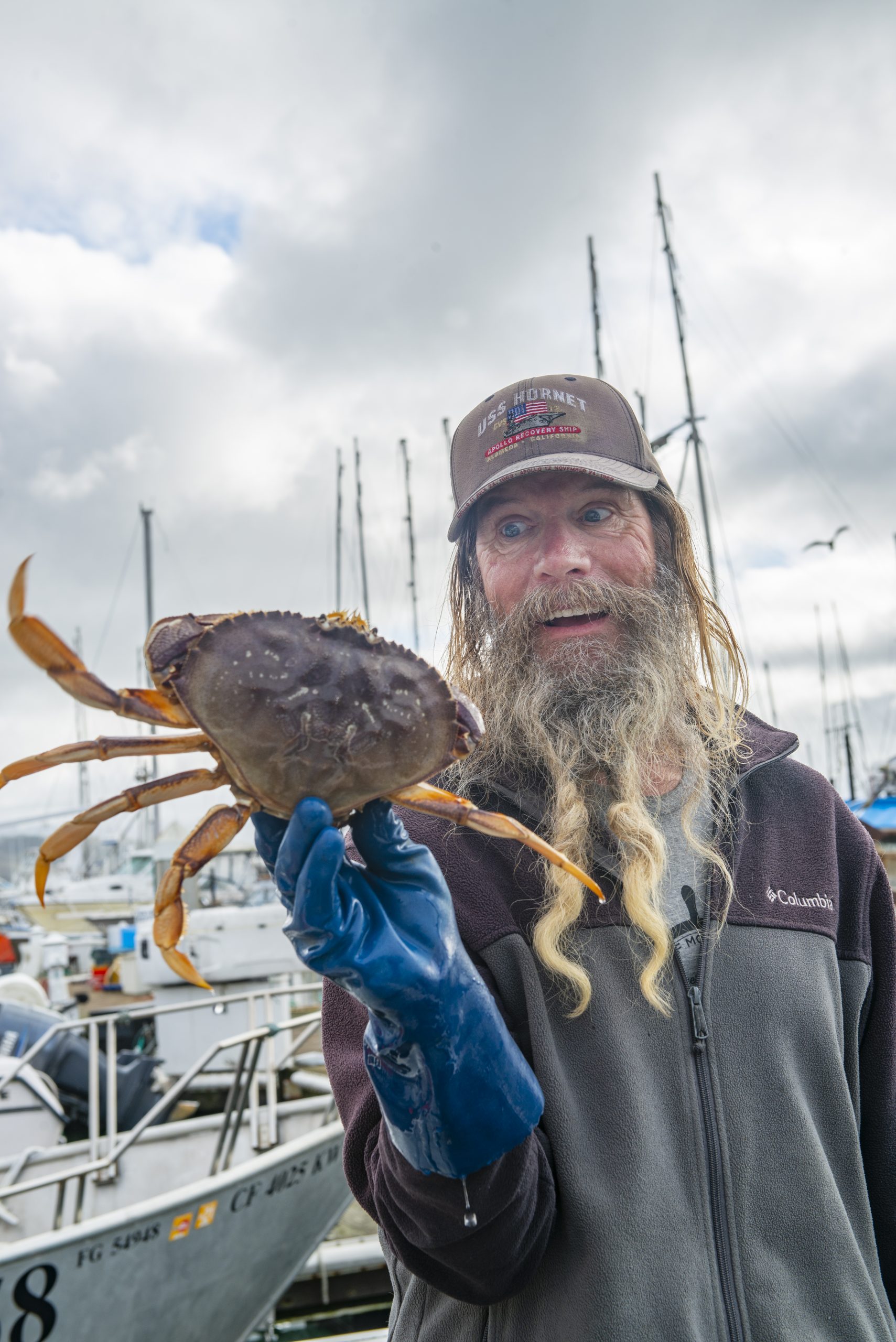 This sentiment is echoed by many of the fishermen and women of the harbor. Pat Coyle, who owns and captains the Janet E, admits that his work dominates his life in the best possible way. He used to have a corporate job working for Oracle, but he appreciates the freedom that comes from being his own boss, even if the demands are extreme. “There are times I’m out here until three, four in the morning. Then you’re back to fishing at six,” he says. In spite of the back-breaking labor of hauling up 100-pound crab pots, and, occasionally, getting tossed around in tempestuous waves, Pat maintains that there’s nothing he’d rather be doing. “I love going out there. It’s quiet. It’s pretty peaceful,” he muses, as he secures a heavy cable running down the side of his boat. “People talk about loving what they do, and I love doing this. It’s not work.”

The fishermen and women know they are serving the Peninsula’s savvy, foodie community, and they have some guidance to get the most from your visit. Kerry Davis advises, “Get here early. We’re a first-come, first-served business.” Many boats start to sell out by late morning on a busy weekend. If you’re looking for crab, they will generally be alive, scrabbling away in live tanks. With croakers, also known as kingfish, or other smaller fish, they may be on ice. How can you tell if they’re fresh? ”Look to see if the eyes are clear and check the gills to see if they’re still bright red. If the gills are washed out or the eyes are cloudy, the fish is probably a day or two old,” says Kerry. 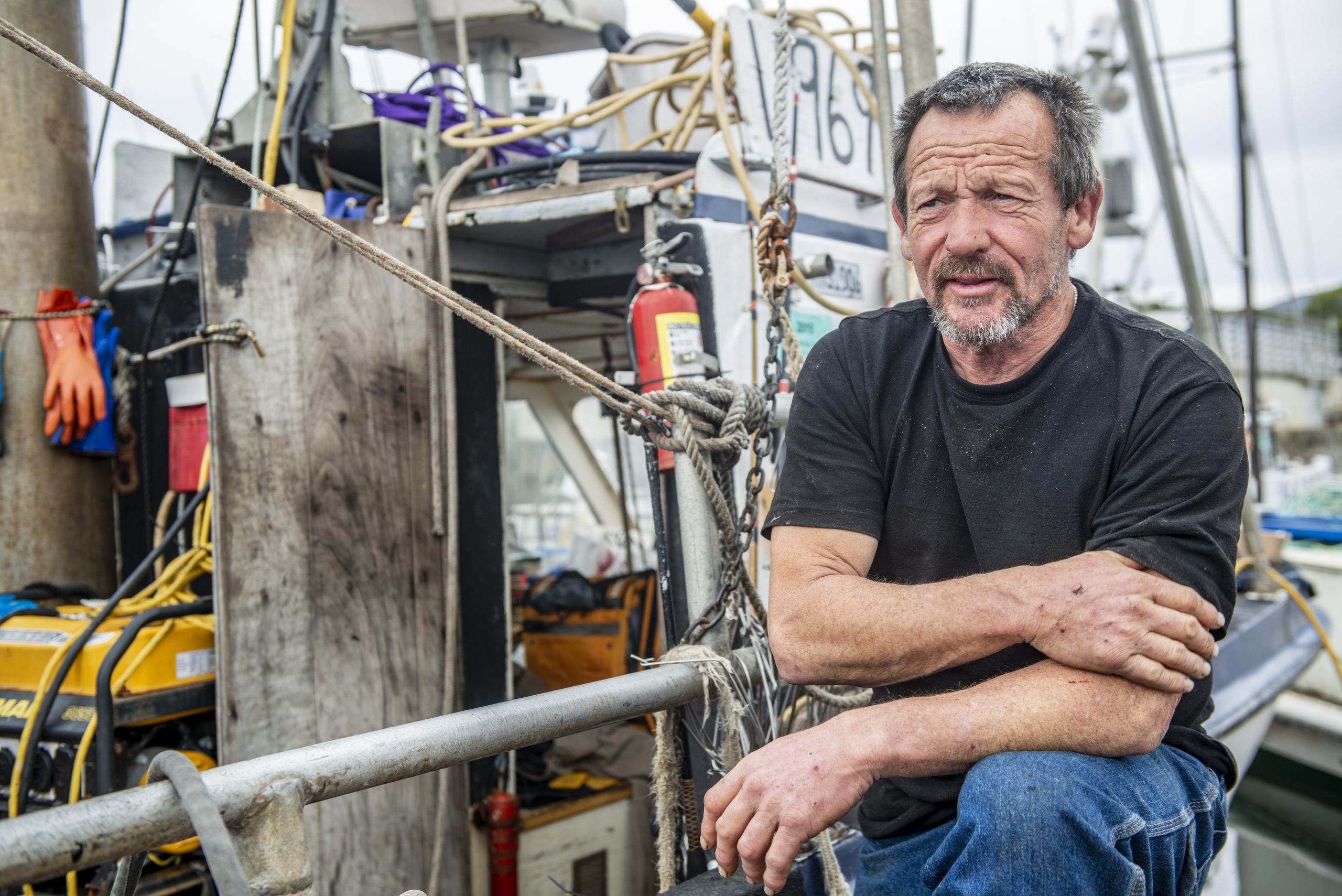 The harbor features other amenities to support visitors in getting the best fish-buying experience possible. If you’re squeamish about cleaning and filleting your own fish, you can make use of Princeton Seafood Company, which will take care of the dirty business for you. And, if you’re inspired by what you see at the harbor, you could get your own crab pot, or put some bait on the line. Just make sure to fish or crab at the rail nearest the Harbor Patrol office where sports fishermen are allowed to try for their own dinners.

Pillar Point Harbor is a treasure not to be missed, and when you visit, make sure to take a moment to appreciate the sharp sea air, the gorgeous views and the devotion of the fishermen and women that make it all possible. For Lance Govia, fishing isn’t just business, it’s a way of life. Peeling off the thick rubber gloves that protect his hands from the thrashing crabs in the live tank, he starts setting up his pots for tomorrow’s haul. “You either get addicted to it or you never want to do it again, but I love it,” he reflects. “I’ll never do anything else.” 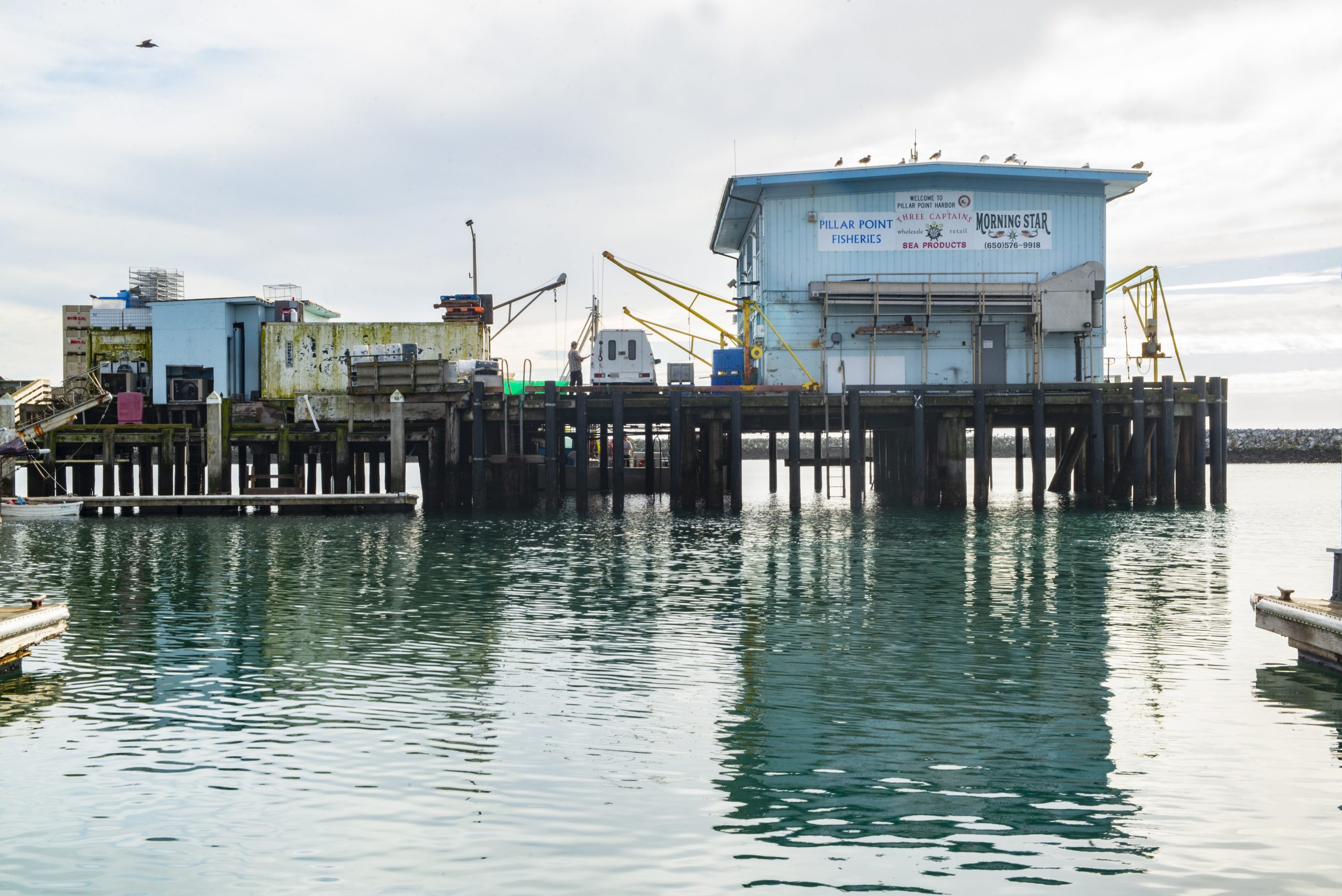