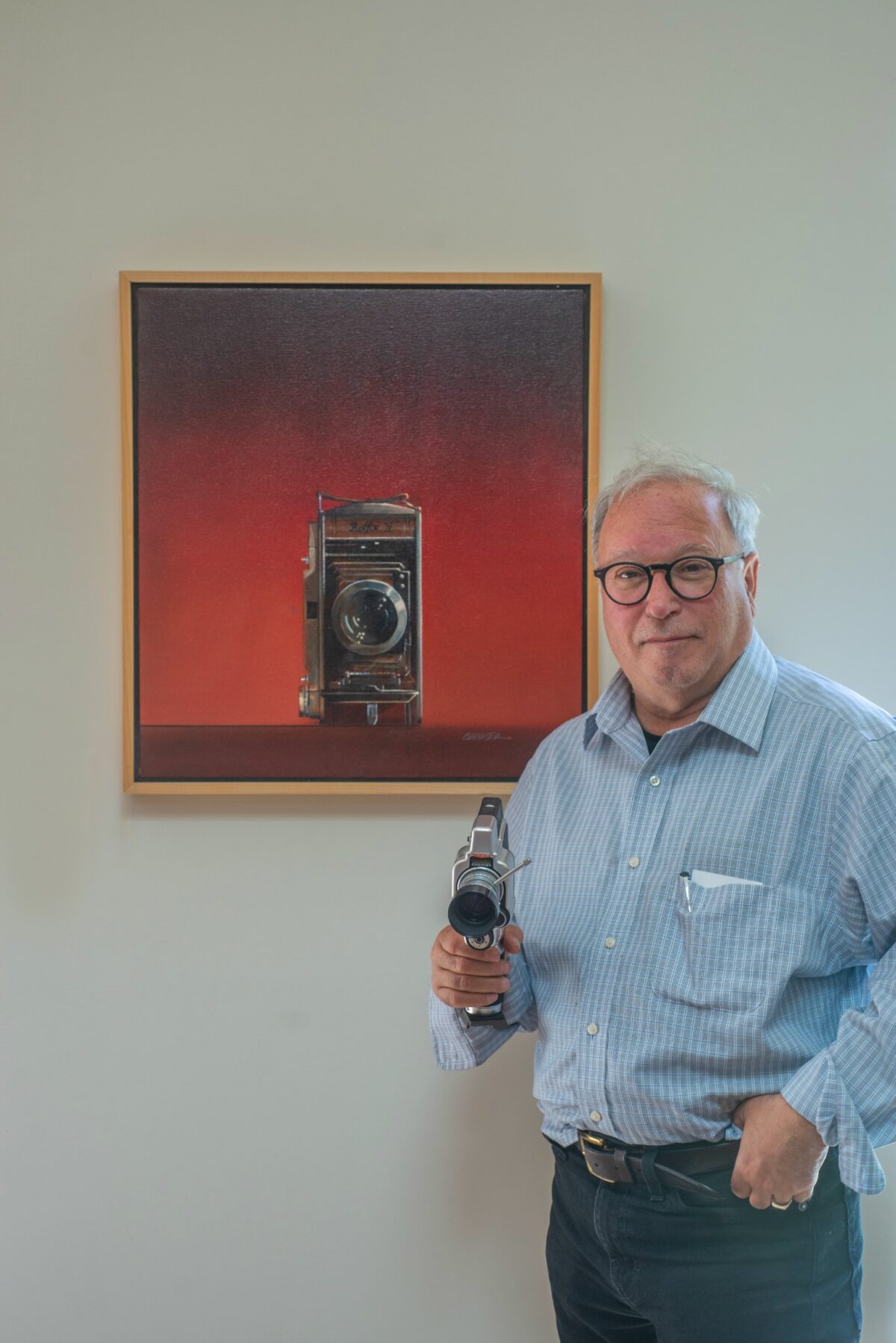 Stuart Soffer may be an engineer by education, but he defies classification. He is also a patent law expert witness, helicopter pilot, technology chronicler, steampunk enthusiast, art aficionado and vintage cine camera collector. Stu is someone whose wide-ranging interests remind us that Silicon Valley owes its unique spirit to more than the ability to build computers or write software.

Stu moved to the Peninsula from New York about 40 years ago for an engineering job. Just as his technology career went from strength to strength, so did his collecting habit. Welcoming me to his Palo Alto home, he explains, “I’ve always been interested in photography and the evolution from still cameras to moving pictures to sound. The process of syncing sound and picture has fascinated me since I was a boy. I loved going to the projection booths of theaters to see how a reel of celluloid became a movie. But art is my other hobby.”

Underscoring that point, the first thing that strikes me is the vibrant art on every wall. Representing artists from Europe and the U.S. and a mixture of pieces inherited from his parents and his own acquisitions, the work is arresting, meaningful, gloriously colorful and everywhere. I’m particularly struck by two works by Polish artist Justyna Kisielewicz jointly called Want More, a stunning painting by a Gaza artist called The End of Peace—somewhat reminiscent of a Frida Kahlo-—and a hyper-real oil painting depicting a 1950s camera on a bold red background. This is a home that could double as a fine arts gallery.

It’s only after taking in the artwork that I notice the RCA cine camera that takes pride of place in one corner of the living room. This is my first visual clue to Stu’s other obsession. Walking into the family room, my eye is captured by a shelf stretching nearly the whole length of one wall. It’s simply laden with pristine examples of early cine cameras, many from the ‘60s and ‘70s, but some dating back as far as the ‘20s.

Immediately, Stu starts picking cameras up off the shelf to demonstrate how they operate. Many need to be hand-cranked every minute–which would explain the jerky footage from early newsreels. All make a distinct sound, some as loud as a lawn mower, some more mellow. A number of the smaller cameras display wonderful Art Deco-like arrangements of lenses and dials, cogs and wheels turning them into objects of beauty. Some project a very steampunk vibe–in fact, Stu has dressed one camera for the part in a pair of aviator goggles.

Stu leads me over to an imposing, tripod-mounted still camera from the 1890s, complete with cloth to drape over the photographer’s head. “This I got from an estate sale in Palo Alto,” he recounts. “It originally came from Paris. It would have taken several minutes to capture an image, so I suppose you could call it a watch-the-birdie camera.” 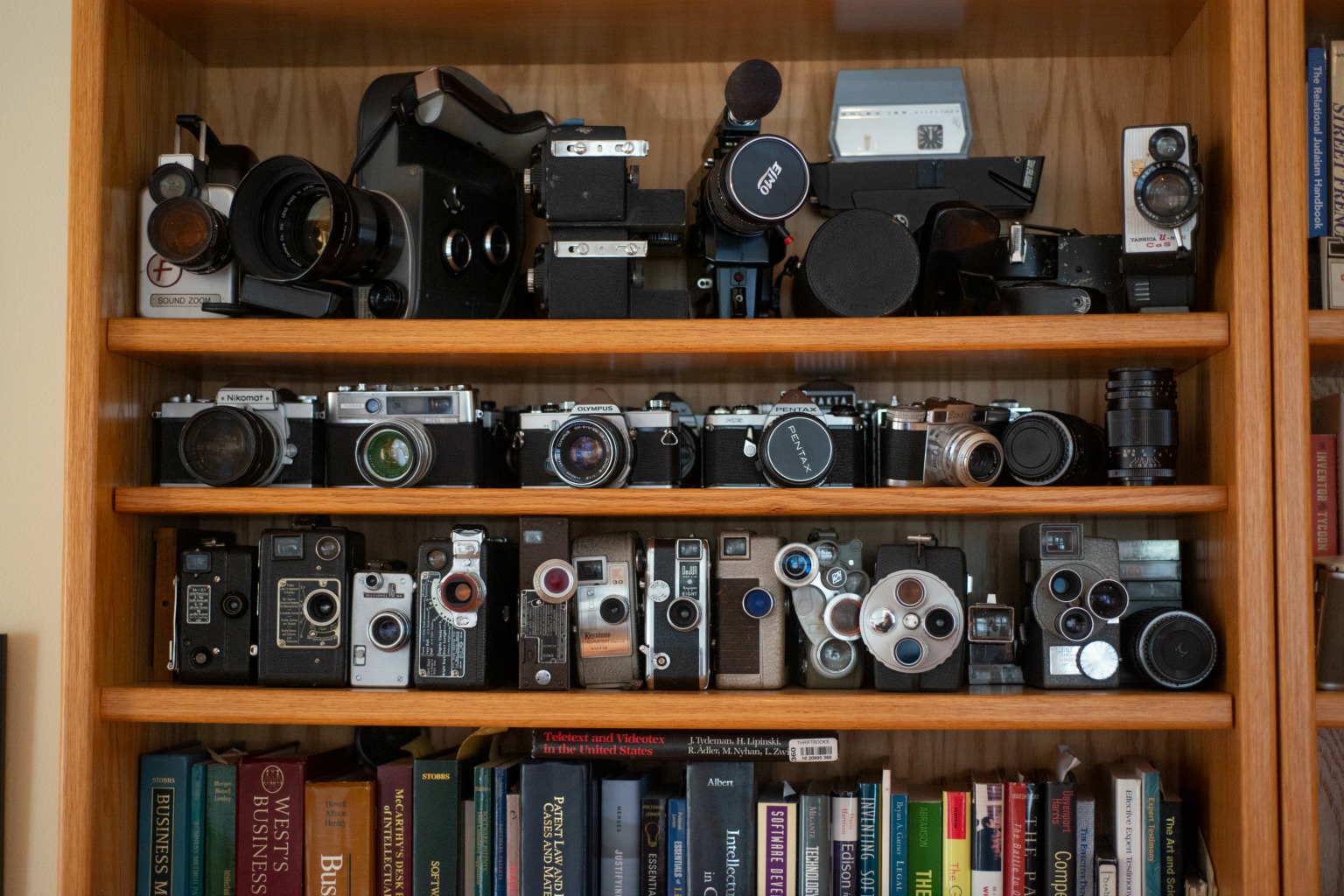 It’s moving pictures that especially move him though. “I spent much of my childhood watching old movies,” Stu says. “As a kid, I loved going to projection booths at movie theatres.”

Stu started his collecting odyssey with just one vintage camera and from there, the collection quickly snowballed. “I went from still to movie to sound movie cameras, then filled in what was missing. There must be 60 or 80 artifacts now,” he estimates, adding that this number is unlikely to expand much in the future. “My wife doesn’t hate the collection; she tolerates it. But I’ve hit my limits on cameras.”

Every item is in perfect working order. Stu painstakingly restores each artifact and generously shares his advice on tricky repair challenges with fellow collectors. “I love getting things to work,” he says. “The miracle of the Internet allows me to find manuals and instructions on how to reconstruct these pieces.”

Stu believes that this interest in repair and reconstruction is a natural progression from his work as an engineer and expert witness: “I find there’s a correlation in Silicon Valley between what people who develop products do and the recreational challenges they look for.” In Stu’s case, this also extends to piloting helicopters. He sees the springs, cogs and switches of a helicopter as similar in nature to the workings of his vintage cine cameras.

Stu shows me a clapboard from the 1950s. Before the advent of the sound track on celluloid, film and sound were recorded separately and pieced together after production wrapped up. During the shoot, continuity staff chalked details of each scene on the clapboard to provide on-camera markers, while the clapper on the top of the board made a sound which guided the post-production synchronization team. Who knew?

Asked how difficult it is to find these rare objects, Stu responds that it’s a matter of focus and timing. “You don’t have to go too far,” he confides. “eBay is a great source but I’ve found a lot locally at auctions, flea markets and estate sales. I picked up some prize pieces after the old Guild and Park Theatres closed. When I heard the Aquarius Theatre in Palo Alto was about to make the change from analog to digital, I rushed over. They told me to take what I wanted, so I grabbed the projector. It was huge. I had to carry it down the stairs and try to cram it into my Porsche to take it home to my garage.” 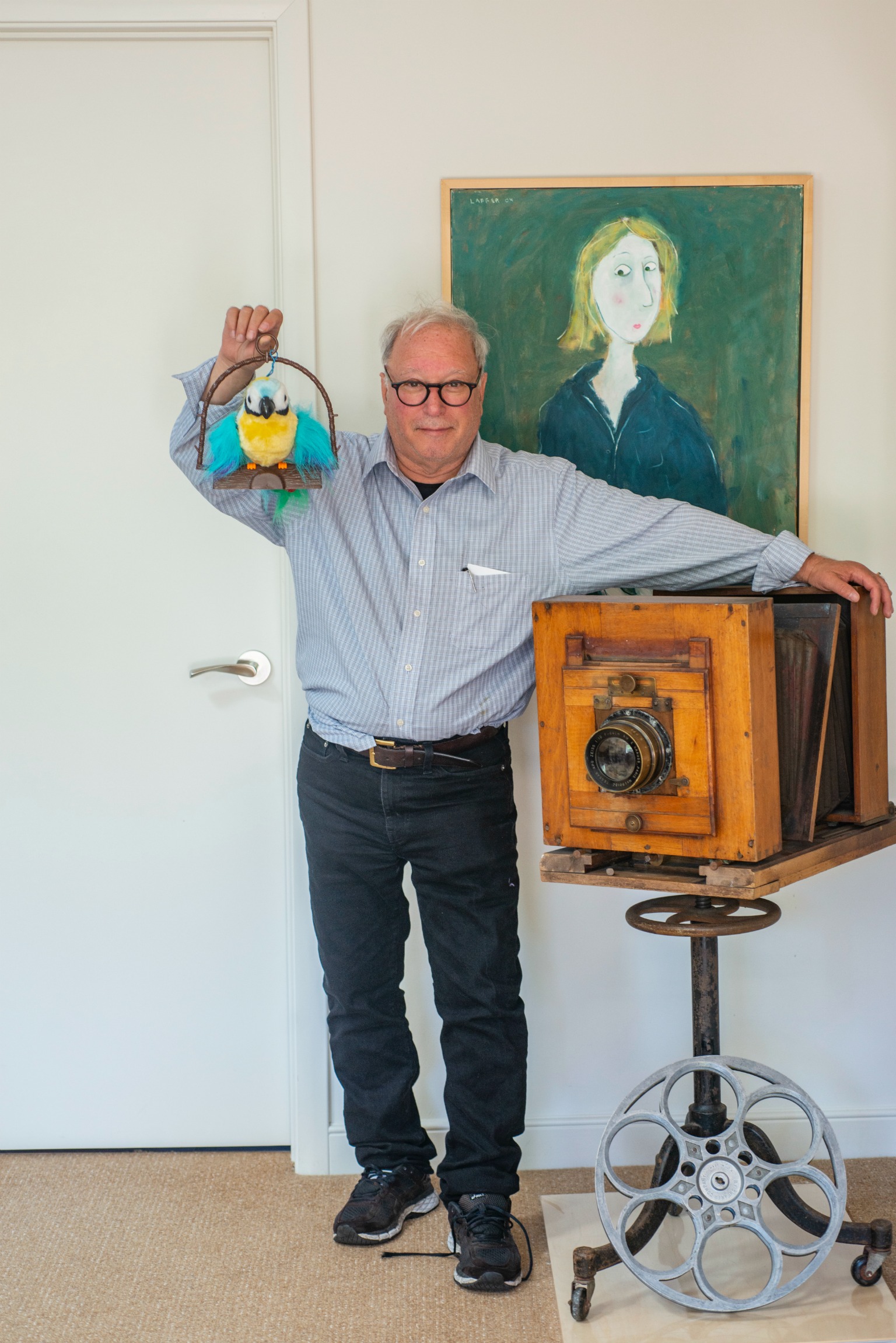 It’s a rare collector who willingly parts with his treasures, but Stu is not afraid to do so. “At the Palo Alto High School flea market I met a student and his mother selling camera equipment. I bought a few things and told him about my projector. He was fascinated. This was a really bright kid and I knew he wanted it. I thought about it for a while, then gave him a call and said, ‘Get your mom’s truck and you can have it. I’m kicking it off to another generation. I had my fun with it, you can have it now.’”

There’s plenty left in Stu’s collection. It still includes a 1970s three-piece sound and motion newsreel camera from 30 Rock (aka Rockefeller Plaza, New York City), special effects machines, sound amplifiers and a 1941 tripod news camera protected with wood casings since metal was not available during coverage of World War II. A favorite piece is the rare 1920s/’30s library projector, a wood-encased beauty with a mini screen that concertinas out for personal viewing and deploys color filters that make black and white film look somewhat like a color reel. This ersatz color technique was commonly used in early filmmaking and, yes, Stu has machines that do this too.

An hour isn’t long enough to fully appreciate the treasures that Stu has assembled together and brought back to life, but it does suffice to understand the allure of this eclectic hobby.

Explaining his own fascination, Stu reflects, “I’ve always had my own contemporary cameras, and of course these days an iPhone does everything and more that you could want, but the technology is hidden away. The old cameras show how the image is produced. They show the magic.”