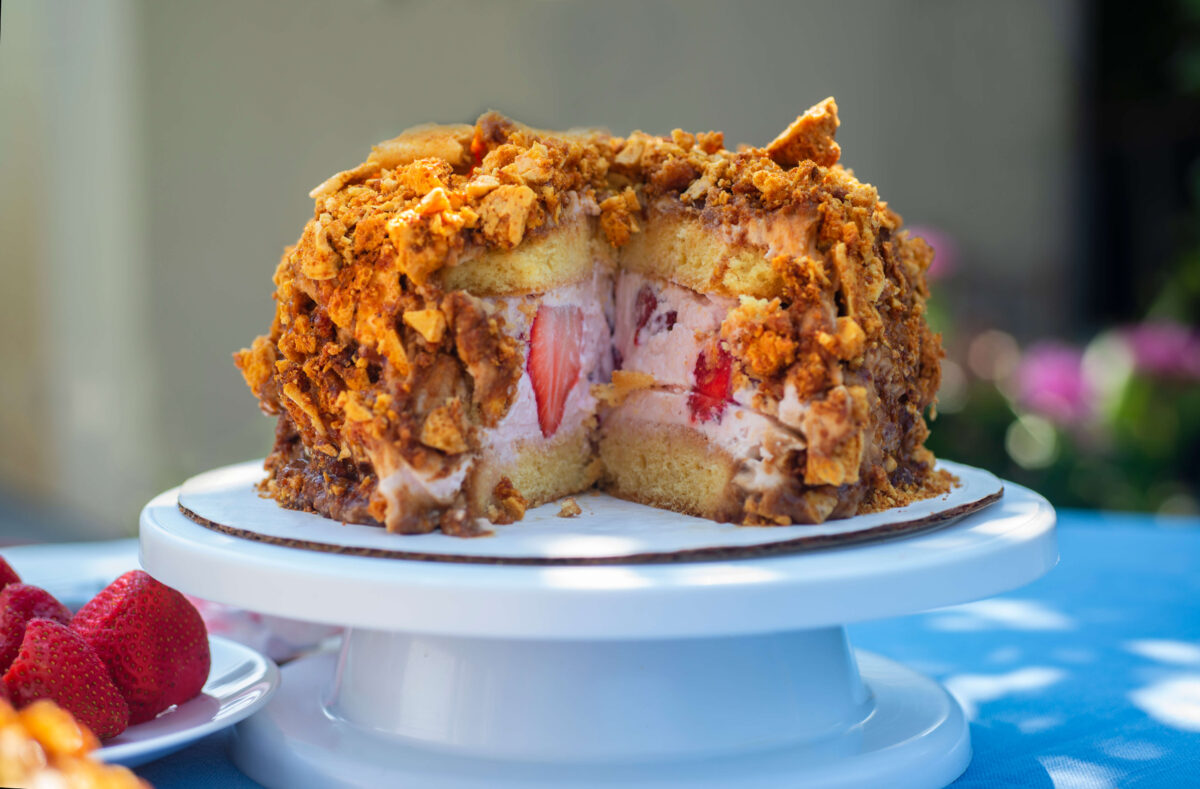 What begins with a simple phone call eventually ends in a slice of cake, although this isn’t a dessert you can purchase from any store—this is Claire’s Crunch Cake, inspired by a recipe from a bygone confectioner that’s homemade by a single baker inside her own kitchen.

When Claire Mack’s hands aren’t carefully sculpting cakes or hand-delivering them to customers at her doorstep, they’re reaching for the ringing portable phone.

The houseline for 233 North Grant Street in San Mateo rings frequently throughout the hour during this calm Monday afternoon with callers from around town or as far as Dublin, 30 miles away. 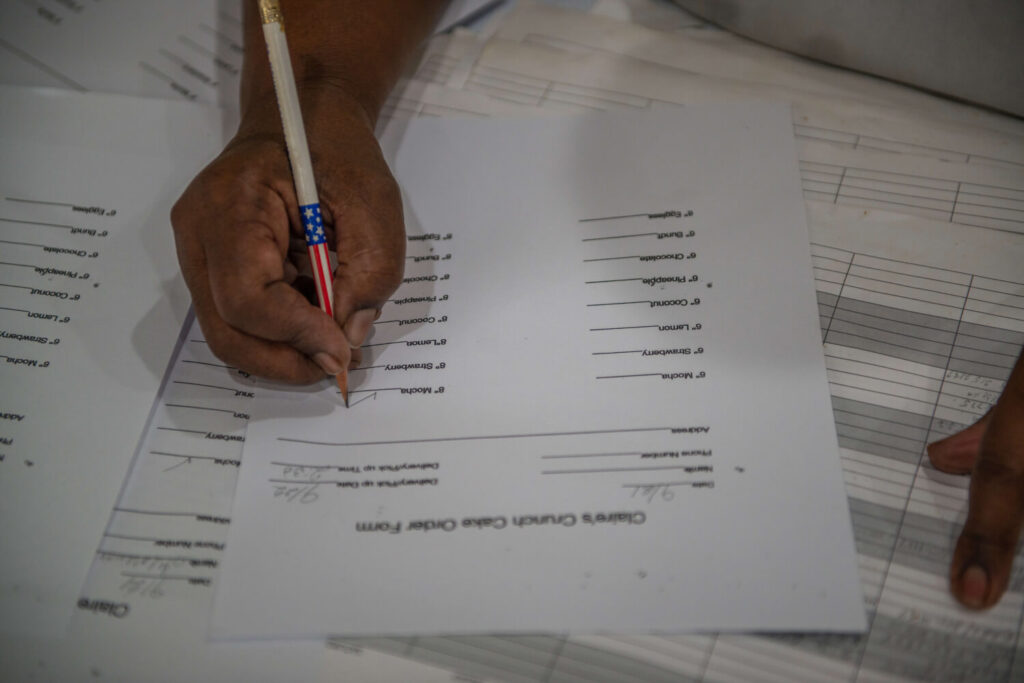 They call with a sole desire: three-layers of yellow gateau conjoined in icing and liberally topped in the titular crunch (bits of honeycomb candy comparable to molasses chips). Of the five flavor options available—mocha, lemon, coconut, strawberry and pineapple—one appears to be the hit of the day.

“You are the fourth order of lemon crunch today,” Claire says on the phone call. “Very interesting… hold on, I need to find my glasses.”

She reaches across the work table she keeps next to her open floor kitchen. The tabletops and kitchen counters are crowded with ready-to-build cake boxes, baking supplies and her prized possession of a triple-
picture frame showing her three beaming daughters. Claire’s home, which she’s owned with her husband Eddie since she was 17 years old, is filled, but not necessarily cluttered, with life.

“Mhmm, pick up on Friday at noon. An eight-inch lemon and an eight-inch straw,” she repeats, while jotting it down on her calendar. 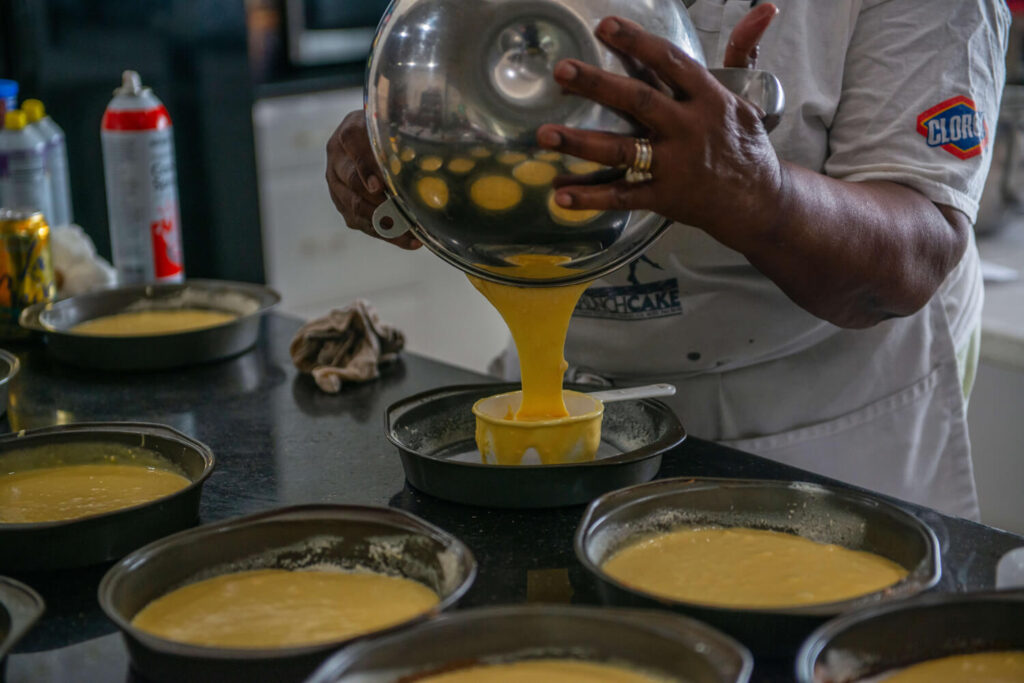 After thanking her caller, Claire begins to return to the cakes at hand awaiting their crunchy tops but soon pauses to assess her upcoming workload. “These are coming in fast and furious!” she exclaims with a grandmotherly joy oft heard when there’s something delicious rising in the oven. She grabs a handful of crunch pieces out of a white bucket and returns to molding her specialty.

Although it closed in the 1970s, Blum’s bakery is believed to be the inventor of this variety of cake. Its origin, something out of culinary folklore, tells of a mistakenly boiled batch of soft candy that turned solid before a chef took a mallet to it for crumbled cake flavoring. The crunch is a mix of water, sugar, corn syrup and baking soda that’s heated to high temperatures and tastes like a caramelized graham cracker.

There was a Blum’s in San Mateo and it was Claire’s middle daughter Lesli’s favorite birthday cake. Years after the bakery’s closure, Claire discovered a honeycomb candy and attempted to recreate Blum’s recipe. This was in 1988 when she was an on-air interviewer for community affairs-type programming at KCSM-TV. She started bringing cakes into work, which prompted requests for more. To pay for the ingredients, she started her side business. A crunch cake revival was born. 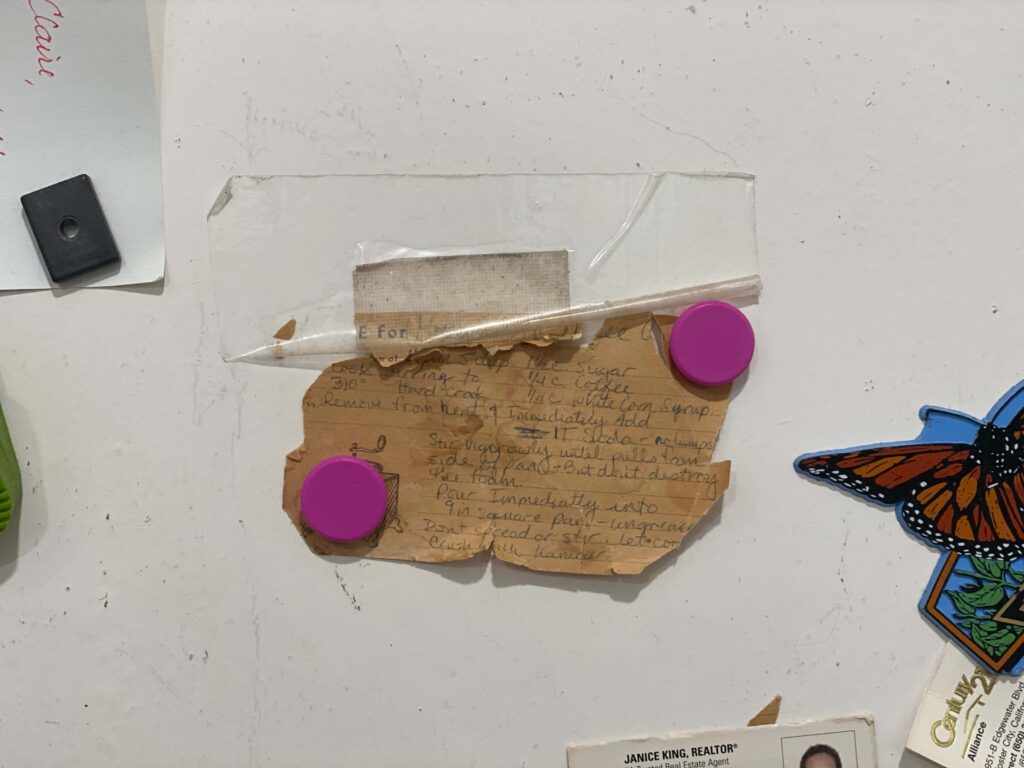 Over 30 years later, her original crunch recipe is scribbled on a brown and tattered piece of paper that’s taped to the door between her kitchen and garage, where five refrigerators store her ever-flowing supply of cake. Her system is always in motion, from baking the yellow cakes to mixing the frosting to creating the crunch.

Now her daughter Lesli, who lives in Oakland and, after graduating from the Culinary Institute of America, worked for The Ritz-Carlton, helps out her mom by making the crunch in her kitchen before a friend of Claire’s drives it over each week. It amounts to about 25 gallons of crunch every week or so.

After Claire applies the frosting to her cakes, she pulls out a white, five-gallon bucket. “This is the crunch,” she says, as she scoops out a handful. She firmly packs the pieces onto every inch of the cake, coating the cake by hand in horseshoe rotations to cover all the bare spots. The creamy frosting is a scrumptious adhesive and the process concludes by delicately inserting the cake into a white box with two important labels: “Refrigerate” and “Clean knife after each slice.” 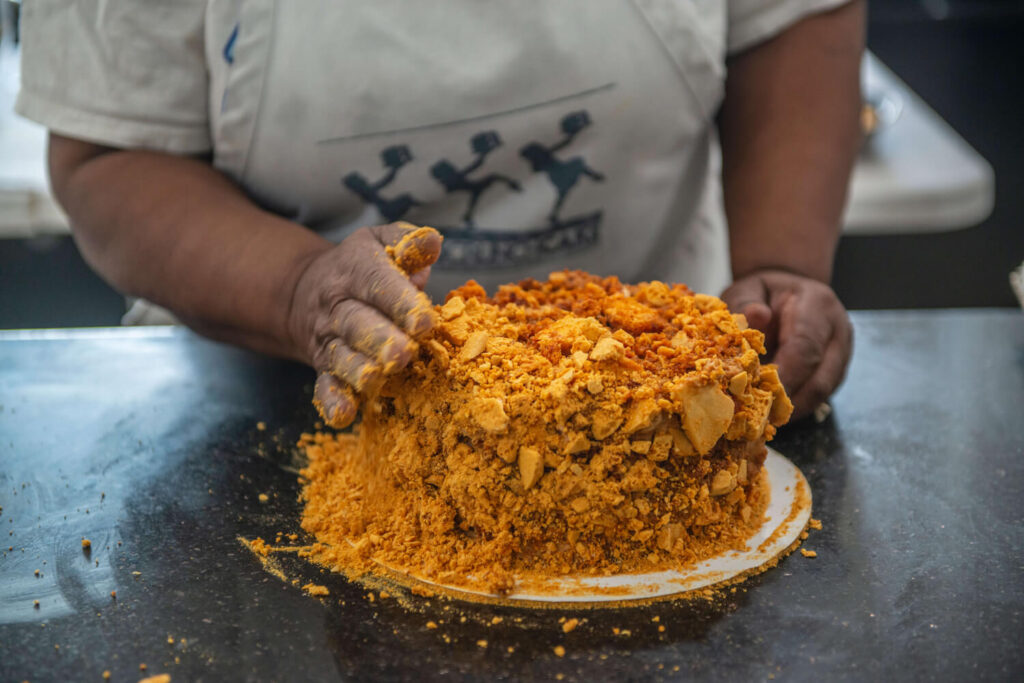 A crunch cake will accompany Claire each time she goes in for a checkup at the Mills-Peninsula Medical Center in Burlingame. It’s her way of spreading a taste of cheer to the place where she was born. Claire’s mother’s family arrived on the Peninsula in 1913 and Claire was born in 1937. She and Eddie represent some of the last Black residents born and raised on the Peninsula from this particular era, both a time for planting suburban roots and for navigating the practice of racial redlining.

Claire met Eddie when they were children growing up in the same neighborhood and just a few blocks from their current home. Eddie is a few years older and Claire dropped out of high school when they got married.

Years later, in 1995, Claire would appear on the Oprah Winfrey Show to discuss overcoming obstacles and the caption on the lower screen introducing her read: “High School Dropout Turned Mayor.”

After being told during a TV job interview in San Francisco that her “face was too dark and her lips were too big,” Claire, already deeply determined, did not falter.

She landed at KCSM, where she interviewed cultural leaders such as the Reverend Jesse Jackson and Huey Newton. Claire’s public affairs program provided her with a keen sense of her community, which led her to a seat on the San Mateo City Council in 1991. She served three terms as the city’s first Black mayor during her 12 years in office. 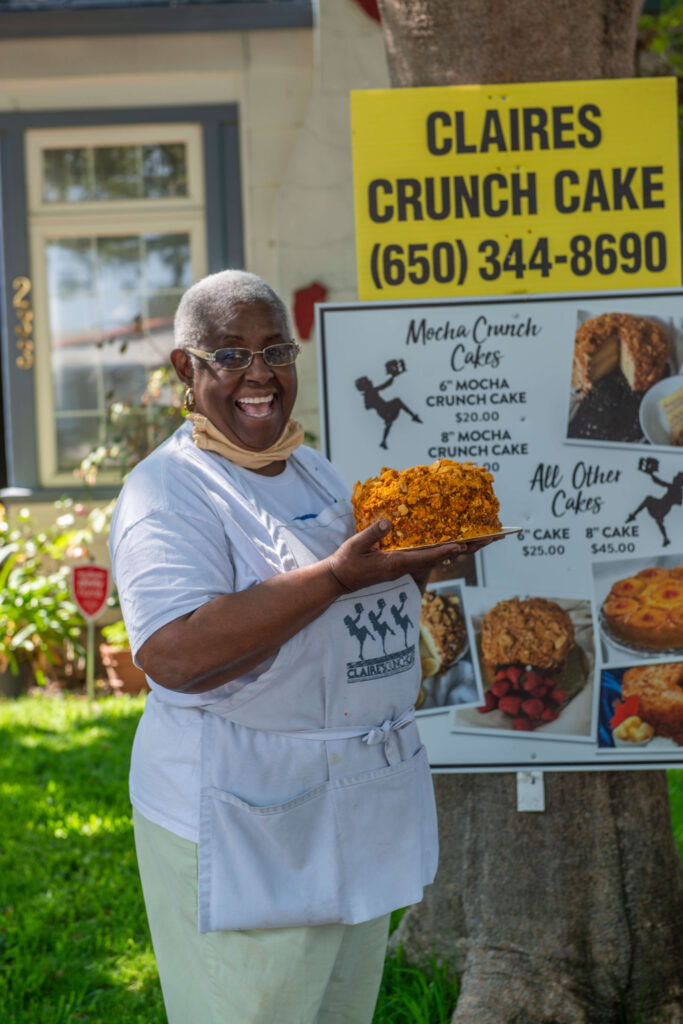 Claire’s love for San Mateo is palpable. After all, she’s only ever paid property taxes to one county her whole life. She’s published several novels, all based in town.

“My city is worth talking about and I’m a great advocate of my city,” she says. “I was at a restaurant once where I told some of the people there that I used to be the mayor and I hope you are enjoying my city. This is my city and I’m very possessive.”

Claire’s hometown pride is perhaps only surpassed by her passion for the family she and Eddie raised together in their tree-lined neighborhood in San Mateo. Her oldest, Vicki, founded the successful GospoCentric Records, and her youngest daughter Kelli is a lieutenant colonel in the Air Force, continuing a family tradition of serving in the military. With Lesli helping with the crunch recipe, Claire feels complete.

“I grew up on welfare and my mother and father divorced. To know that a multi-millionaire came out of my family…” she says, holding back tears as she reflects on the success of her children. “That’s amazing.” 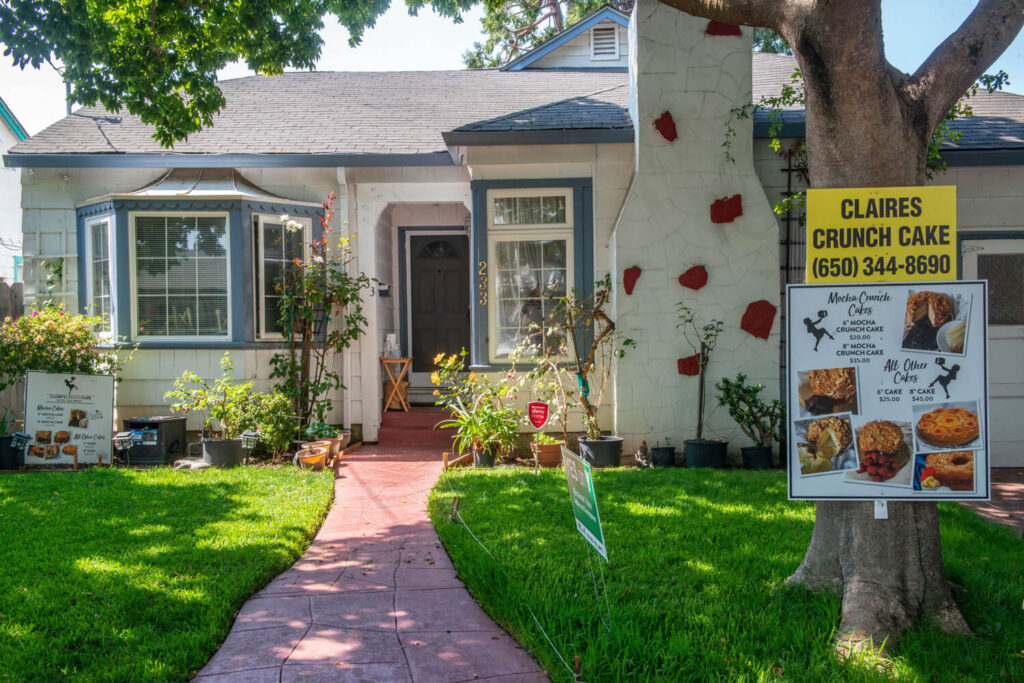 On a street light pole outside their home is an honorary sign that says “Mack Family Way.” It’s a small tribute to Claire and her family, who host benefit concerts in their backyard when there isn’t a global pandemic afoot. Claire passes underneath the sign as she helps nearby neighbors by furtively pulling their garbage cans up off the street. The former mayor never really takes a day off.

Claire and Eddie now have their first great-grandchild to cherish, a three-year-old named Hayward, who is the inspiration every time Claire begins to bake another crunch cake.

“I think in a few more years, I’ll have a little nest egg for him to go to college. That’s what I’m working on but it’s not work,” she clarifies,”I have a real goal in mind.”