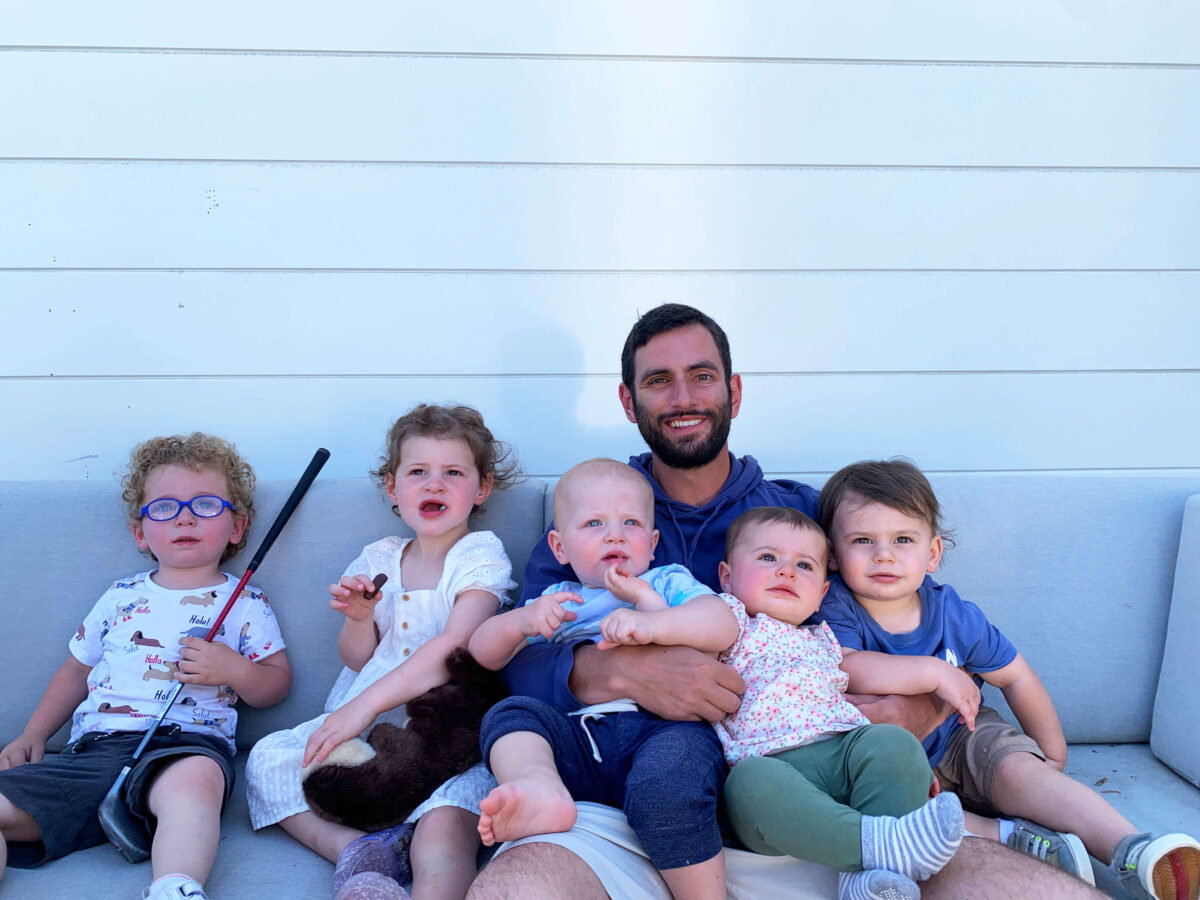 After almost a year and a half, my son Coby was able to come visit us from his home in Tel Aviv. It was a long period to be apart and our entire family felt it. The lapse in time was especially evident in our newest generation—a new niece and nephew Coby could finally hold in-person and three toddlers who had magically transformed from the infants he had kissed goodbye some 18 months ago.

The collective Citron clan, Coby’s sisters, brother, brothers-in-law, sister-in-law and parents, were so ecstatic about him being home—and aware of how fast a two-week visit passes—that it was almost a brawl to claim
Coby’s attention. All he wanted was some R&R, but all we wanted was some Coby time. He is, after all, the youngest—and, well, the favorite (I think we’d all agree on that)—so wanting to hang with him comes naturally.

One of the most remarkable aspects of this visit was how effortlessly the two-year-olds (born two weeks apart) and the one-year-old bonded with Coby as if their entire experiences with him had not been via FaceTime. Coby’s brother and sisters are conscientious about FaceTiming on a near daily basis and having their children build relationships with their uncle.

Physical touch is paramount to the human experience, but it was clear to me that you can still come to love and treasure someone without that taking place. The children were all so happy to have their uncle here and, of course, Coby—a warm and loving person—was down on the ground playing and laughing and romping with them.

Being able to have real-time visual interactions is a wonderful reality of our current existence. My kids and grandkids don’t know any better, so they use this technology with ease and confidence. I frequently forget about the opportunity to use the wonders of our day, whether on my phone or even to deposit a check, but I’m very grateful for it in the case of Coby and his nieces and nephews.

Whenever I could, I grabbed Coby and Josh (his older-by-seven-years brother) and we hit the golf course. The three of us love to play together, creating our own brand of what we call “team golf,” which we play in a scramble format. It’s a lot more fun for us since we are working together instead of against each other. The highlight of the rounds (which we will remember a good while) was when I accidently sprayed sunscreen into my left eye and could hardly open my eye for nine holes. My sons will give me grief about this for the rest of my life!

My daughters Ari and Tali wanted to take Coby shopping with them, since he had not bought any new clothes since the last time he was here. They are expert shoppers and Coby listens to them. They also persuaded him to do “the Stanford Dish” more times than poor Coby cared to, but he was a gracious sport about it.

We planned almost every meal with Coby and visited every restaurant that we are fond of, some of them several times. It was impossible for everyone to always be there, of course, but we managed it on several occasions, from our Shabbat dinners on Friday nights to at least three going-away dinners. And then there was some sort of lunch every day for whomever could make it.

One night was particularly special, as the in-law children good-heartedly stayed home with their sleeping young ones and it was just the six original Citrons together for dinner, and we realized it was probably 10 years ago in Barcelona when that had last happened. We went to Coby’s favorite restaurant, Tamarine in Palo Alto, where we sat inside and had a wonderful night with toasts, laughs and happiness. Whenever Coby is home, we splurge, and this was no exception. Ari ordered just about everything on the menu for us (she is the official “orderer” in our family) and it was truly a cheerful feast.

Two nights later, on the way to taking Coby to the airport for his 8PM return flight, we stopped at Josh and Adara’s home in San Mateo, where we all gathered for a meal of pizza and children and goodbyes. That period right before he leaves is a tough one emotionally. You can feel the minutes ticking down and I find it difficult to be in the moment. Half the time, tears start streaming down my face, and on this evening I was not alone. But the kids all climbed on Coby, happy to be with him and to feel his love and affection up close, loving their improved physical relationship with their favorite uncle and knowing that he is just a FaceTime video chat away.