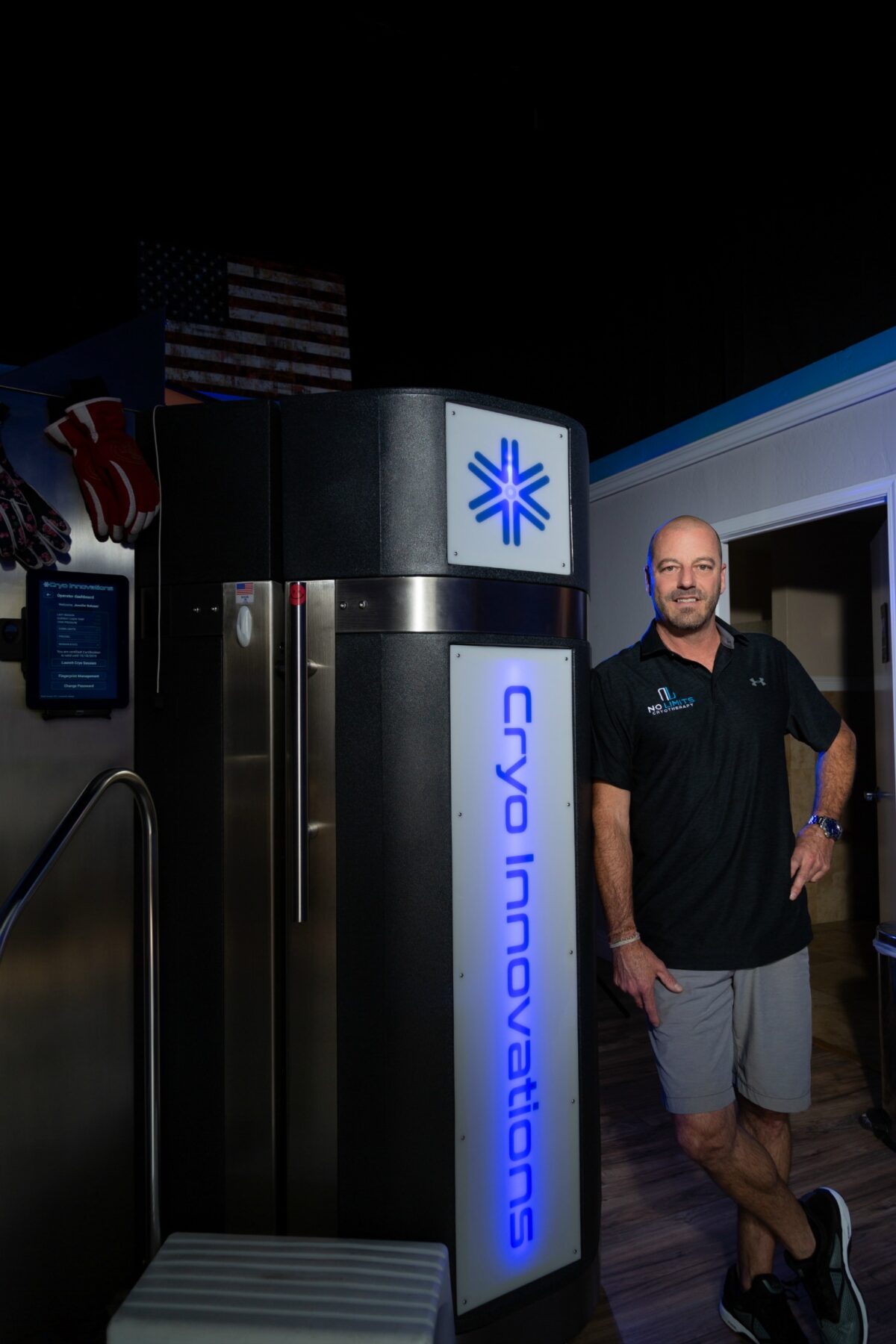 If you’ve ever watched the scene in The Empire Strikes Back where Han Solo gets frozen in carbonite and wondered what it might feel like, you’re in luck. Darth Vader might have used the cold to imprison his enemy, but proponents of cryotherapy (also known as cold therapy) claim that freezing temperatures can actually be beneficial. Peninsula residents can now join the celebrity-fueled trend of getting one very “cold shot” by immersing themselves in an upright cylindrical chamber where they’ll experience freezing temperatures, up to minus 230 degrees Fahrenheit, to be exact. That’s possible thanks to No Limits Cryotherapy, which opened last fall at the Sharon Heights Shopping Center in Menlo Park.

While each session of “cold therapy” is unique, most take place over a three-minute period with an attendant always overseeing what’s going on. Liquid nitrogen is sprayed into a small chamber the patient stands in, which is shaped a bit like a shower stall, causing a drop in skin temperature. When the chamber door opens at conclusion, the liquid nitrogen spills out, not unlike the fog cascading over coastal hills. While cryotherapy is new to the Peninsula, it’s been around since the late 1970s. Proponents of cryotherapy claim that the cold improves circulation, decreases inflammation, increases metabolism and improves skin appearance. Think of it as an ice pack for the whole body rather than one just strapped to a knee or elbow.

No Limits owner John Jennings describes himself as “an athlete always seeking a competitive edge.” Growing up on the Peninsula, he became a serious mountain biker and scratch golfer. Dissatisfied in a job he’d held for two decades, John started researching cryotherapy after hearing Hollywood and sports celebrities rave about its effects. “Like other athletes, over the years I took a lot of ice baths to speed recovery after intensive exercising and thought something else had to be more effective,” he says. John explains that cold therapy tricks your brain into going into survival mode. While your core body temperature stays at about 98.8 degrees Fahrenheit, your skin temperature drops to about 30 degrees Fahrenheit as your brain releases endorphins and adrenaline. “That’s the key to cryotherapy, getting your skin temperature down 30 degrees, which activates the central nervous system,” John says. “Your capillaries expand three to four times the normal amount and deliver super-oxygenated blood throughout the body. With your brain identifying what is hurting, the nutrient-rich blood goes to the problem areas. When you get out of the tank, norepinephrine levels can be up to five-fold what they normally are. There is a natural adrenaline release. Clients report feeling a boost of energy.”

To protect against the outside possibility of frostbite, customers at No Limits are outfitted with socks, big slippers—many with a whimsical animal theme—and warming gloves. The liquid nitrogen that cools the chamber never actually touches your skin, but the insulation is just an extra layer of protection. Though it might sound claustrophobic, your head and neck are always above the chamber during cryotherapy, and you can open the door and leave the chamber at any point if you feel uncomfortable.

Caroline Wyman is very familiar with the chill drill. She first tried cryotherapy last year, and she’s been back to No Limits repeatedly since then. “I love that the sessions are only three minutes, because I have a very busy schedule working at the VA,” she says. Caroline believes the cold therapy has improved her back pain, and she’s happy to have a new treatment that complements her existing regimen. As Caroline describes it, cryotherapy helps her body bounce back from wear and tear so she can keep up her daily boot camp at a local gym. “It’s very comprehensive in what it does for me and my body.”