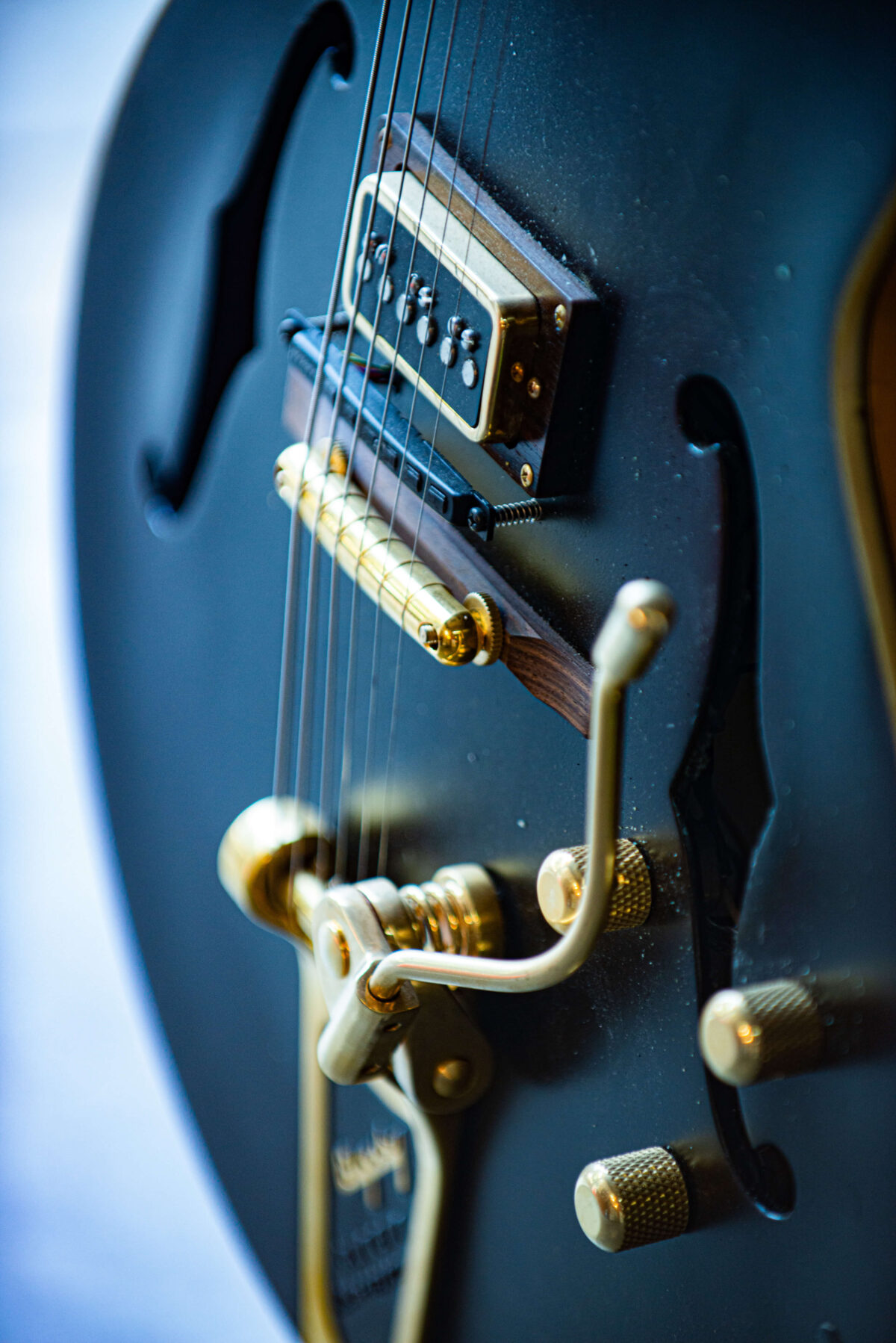 On a recent afternoon in Belmont, there wasn’t a vacant workbench or station available inside the custom-instrument shop California Guitars.

The sander and bandsaw were preoccupied with cutting a slab of wood into a Telecaster guitar-shaped body while coats of yellow residue from a recent spray job dried inside the painting booth. For the moment, the most dangerous machine in the building, a wood router, stood idle. Used to carve precise pickup pockets and control plates, it has the reputation for being the bane of guitar makers for how it can subtract a digit without pause.

Leaning near the entrance of the shop’s industrial-grade garage door were two long boards of old-growth redwood. Around here, they’re nicknamed “California gold.” These were gifts from a next-door neighbor who builds furniture but after Grant Baldwin has his way with them, ten handmade guitars will rise from the timber. 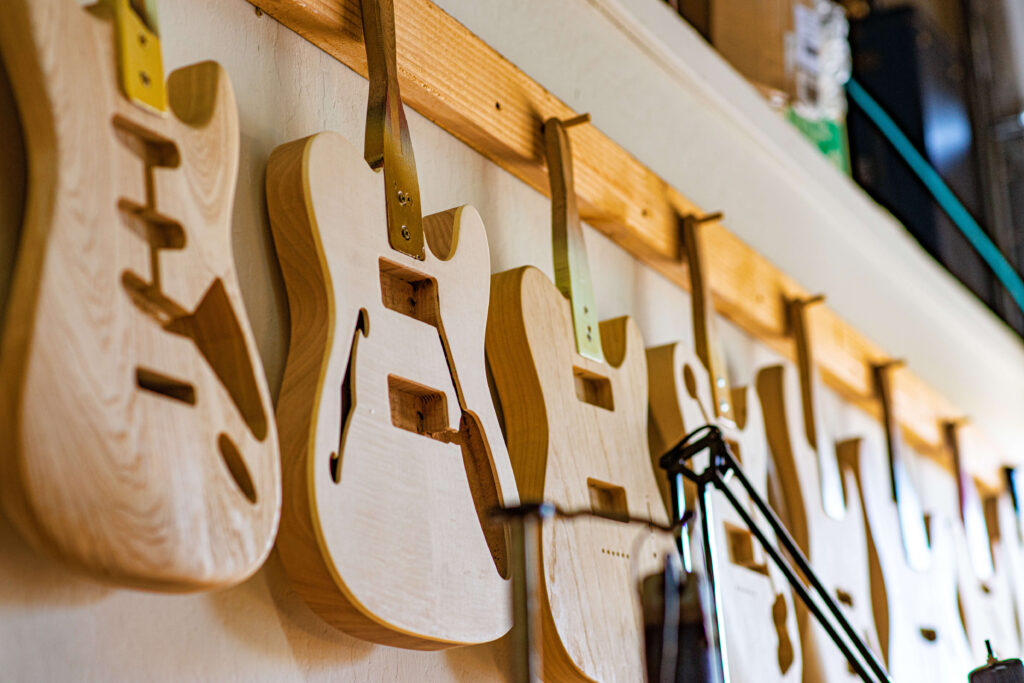 A micro-universe of guitar creation, repair and renovation swirls around Grant in his one-man shop as he works away on the instrument he’s loved (and has lovingly ripped apart) his entire life.

“I’m a task monkey and that term doesn’t bother me,” he grins. “I work multiple stations at the same time. I’ll glue up a neck and while that’s curing, I’m over in the paint booth where I can shoot two guitars a day. I have bodies on the wall that are projects waiting to be conceived. I put together a list every day because I can’t freestyle. My customers understand that some of this takes time.”

No one is complaining about the process because the outcome speaks soundly. Grant curates a “space for musicians by musicians at musicians’ prices,” as he describes it. As a devoted admirer of Fender Stratocaster and Telecaster models circa 1962 and 1963, considered the top of the line for classic guitars, Grant riffs on these particular guitars to pay tribute to the hallowed tones, without the cost of an installment plan.

“I want to give everybody a fair shake. People will pay a lot of money for certain custom builds and I was never comfortable with that,” he explains. “A guitar that comes in here for a tune-up gets about an hour’s worth of my labor at no charge. I want people to get a little more than what they pay for. It’s not a formula for success but that’s how we do it here. I can’t abide by sending a thing out of here improperly done; I treat every instrument like it’s my own.” 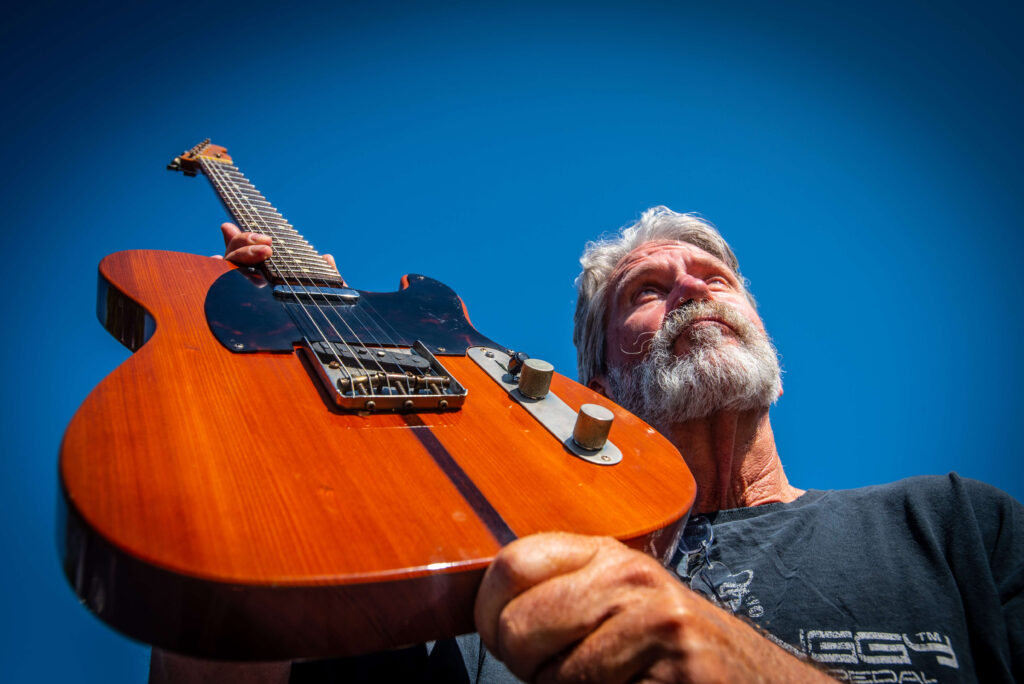 Grant’s personalized and personable touches have scored fans across the Peninsula and country since he opened the garage door in 2005. He recalls how a musician dubbed his guitars “hot rods” for their unique and high-voltage modifications and fondly remembered when a utility player for The Grand Ole Opry in Nashville called him up to effuse about the soulful touches. The musician told Grant that his guitars feel alive.

“He said that they were ‘vocal and ready to go,’” Grant says. “And I want that light sound! The left hand is the first thing that engages with the instrument and I’m nuts about removing any obstructions. No pokey frets. Those are things that hit our brains negatively. I want the guitar to feel like it’s lived in a little bit.” 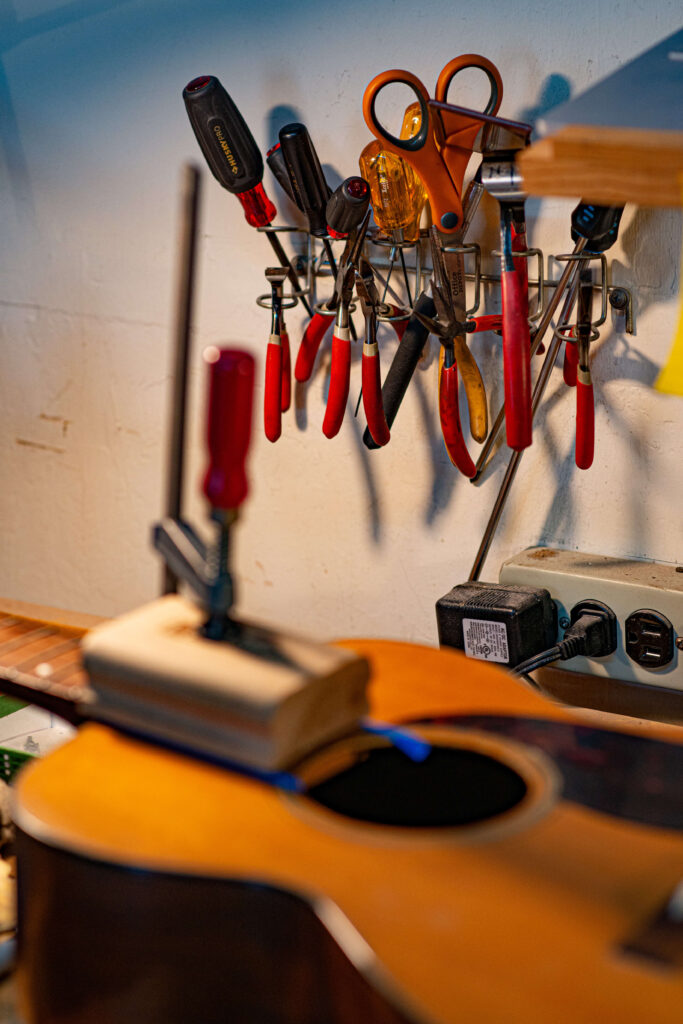 Scrawled in white ink on a black board hung at the entrance to California Guitars is Grant’s motto for the shop: “Find the guitar you left behind.” It’s both an opening salvo for prospective buyers as well as a reminder for the guitar maker who didn’t always live out his dream job.

He previously owned a company that specialized in freight handling for burgeoning tech companies in the 1990s. The money was lucrative but the constant stress and restrictive creativity took its toll on Grant’s joy. 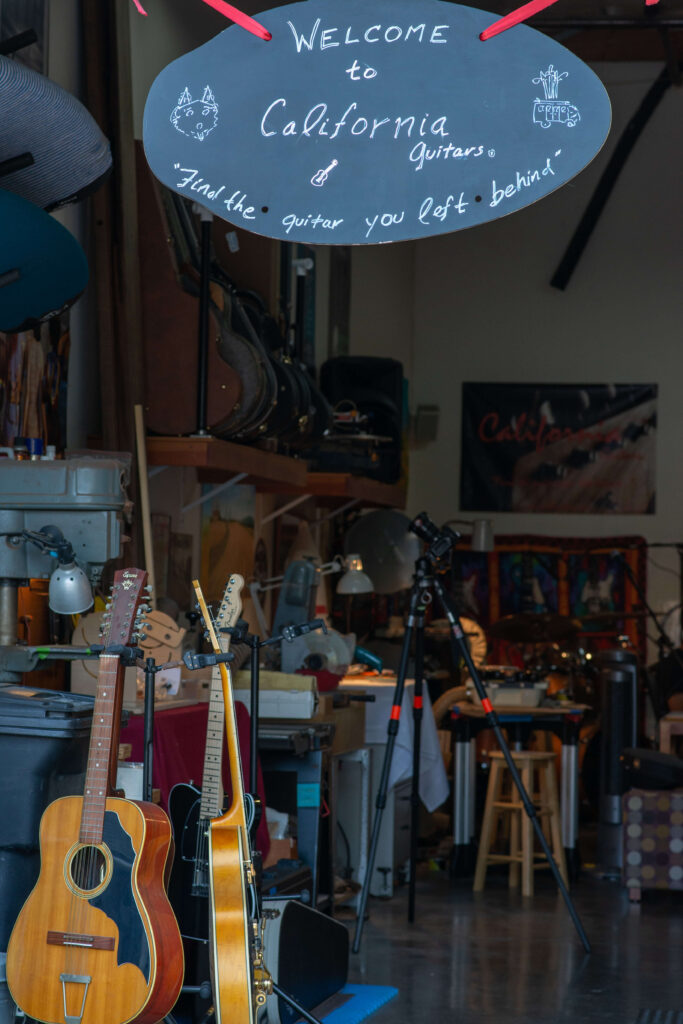 “Work was a drudgery and I didn’t have any other examples in my life. My father was well paid but his relationship with work was that it was something he had to do to get to where he wanted in life. It’s all about giving yourself permission to do what you love,” he opines.

Grant’s father kept a Martin guitar in his childhood home in Newport Beach and he would toggle between the guitar and playing saxophone. But by the time Grant turned 12, The Beatles had played Ed Sullivan and left an indelible mark. Grant soon purchased his first real guitar, a 1962 Telecaster, and his fascination with the instrument went well beyond strumming it.

“I tore that guitar apart within six months!” he laughs today, recalling the horror his father felt as he witnessed Grant’s earliest embark into
guitar alteration.

“It just looked very cowboy to me but I was a hippie surfer. I wanted the guitar to look like a redwood tree. I took advantage that it was modular and began swapping parts to learn about the thing. I may have had a hand in destroying the collector’s value for a guitar or two …” 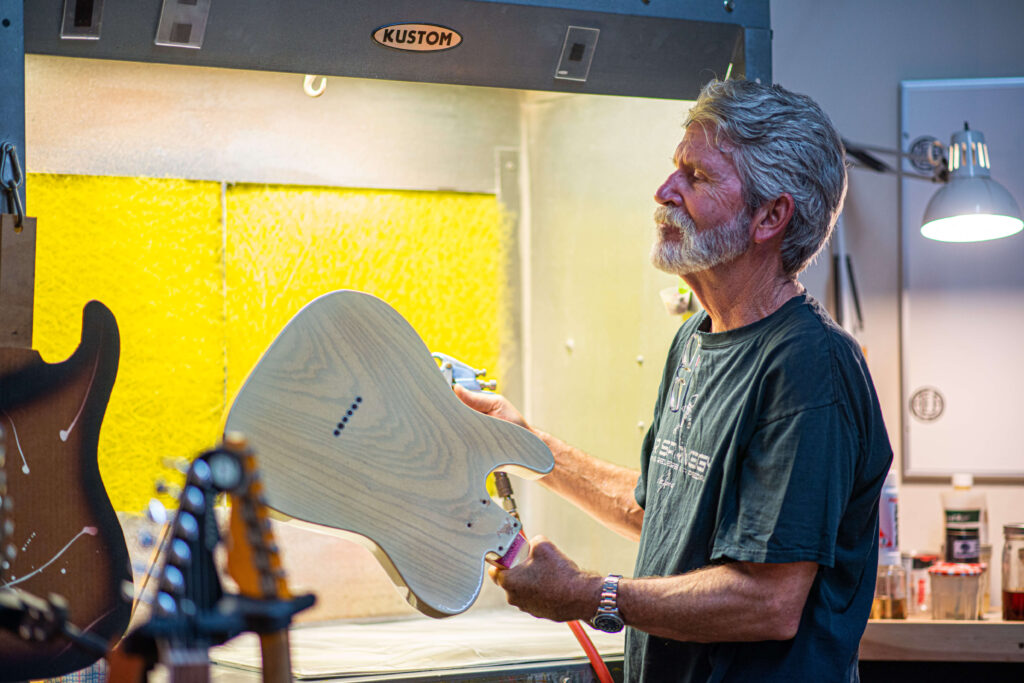 Grant and his wife Liz live near the shop and their daughter Brooke sometimes helps out with posting guitars for sale on Craigslist and Reverb. In between work, the father and daughter ride skateboards in the parking lot and a few custom boards that Grant cut hang on the wall like wooden trophies to his boundless craft.

Although he is by definition a luthier, a craftsperson who builds and repairs string instruments that have a neck and a sound box, Grant prefers to downplay such a grandiose description.

“I do the work of a luthier but I can’t lay claim to that title. After years down this road, there’s nothing I can’t recover from. I’ve made every mistake known to man—but I try not to do it on other people’s dimes. I’ve hit my marks and am validated by someone saying I want to do this again with you,” Grant says. “And while I can’t afford 53 Telecasters, I can build one. That’s what satisfies my soul.” 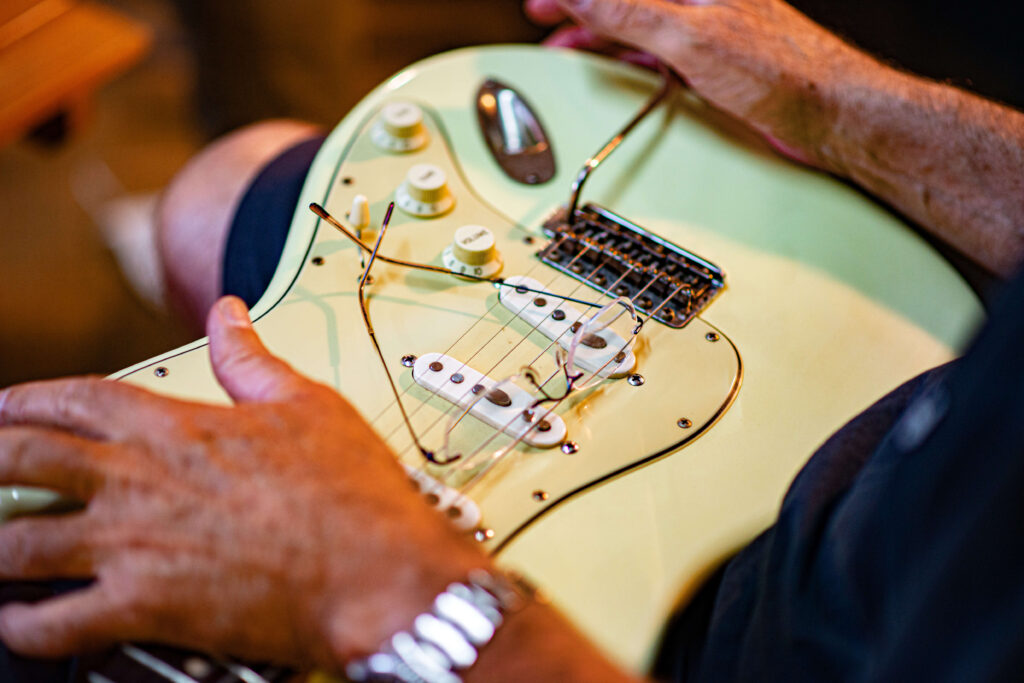