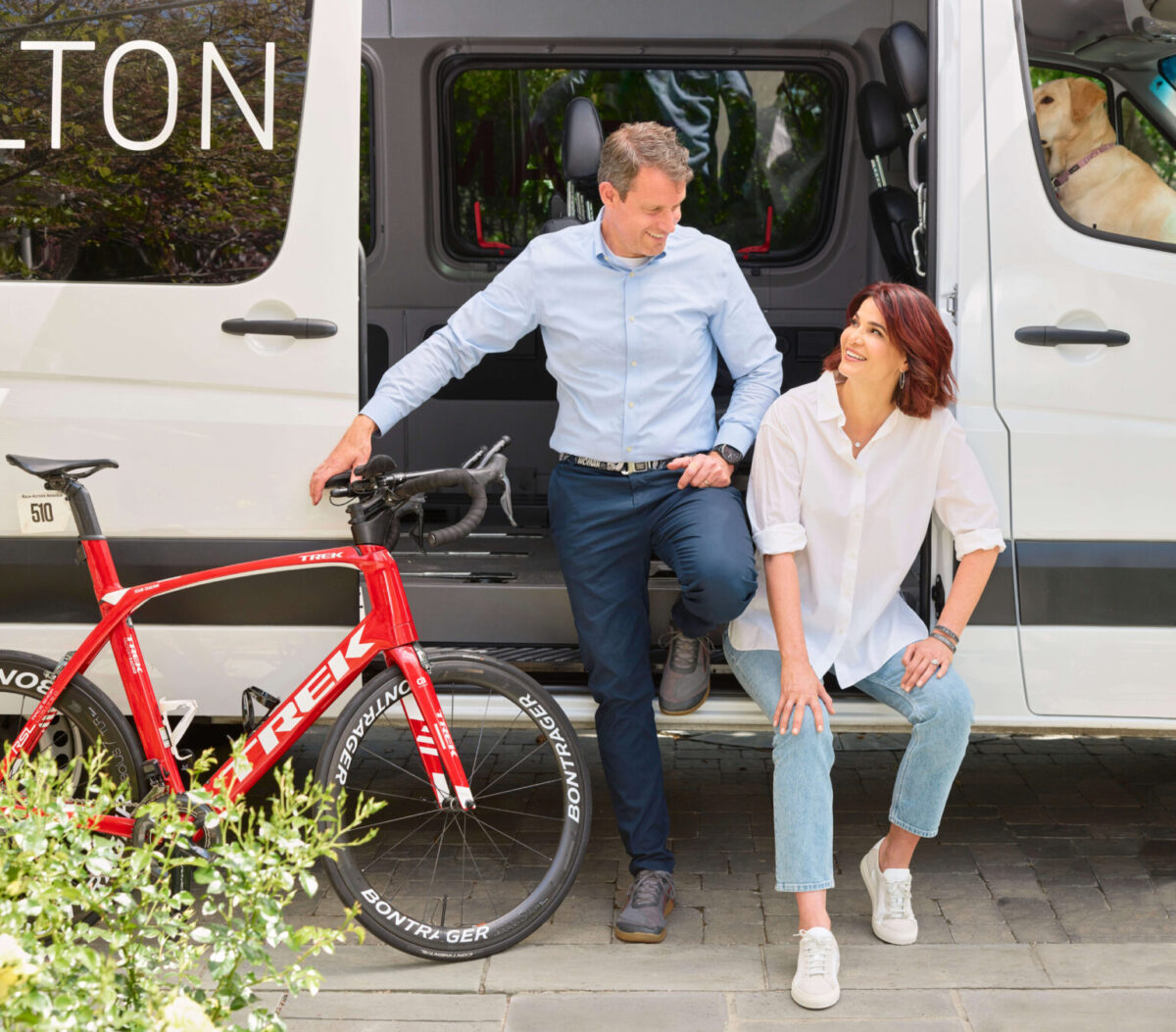 In the weeks leading up to her husband bicycling across the country to fundraise for cancer research, Jenny Dearborn was uncharacteristically still.

The plan all along was that she would hang at home in Palo Alto as her spouse, John Tarlton, competed in the Race Across America—an ultra-distance road cycling race stretching some 3,000 miles from Oceanside, California, to Annapolis, Maryland—but Jenny couldn’t resist helping out in her own way.

“John was so focused on raising money and I was thinking, ‘How can I help?’ I thought that if we captured it on video, it could be a way to help raise money to have footage from the race,” she recalls.

“I found this little production company in Redwood City with a couple of 28-year-olds who own cameras and know how to use them. I called them and said, ‘Will you come in a van across the country to get two camera shots of everything John does?’ And we’ll figure out the rest later…”

What transpired next was 2,000 hours of footage documenting the grueling adventure spanning deserts, endless cornfields and the Chesapeake Bay. John, backed by a crew trailing him with food, support and the occasional nap opportunity, completed the race on June 23, 2019, after nearly 12 continuous days of pedaling.

The trek, tribulations and triumph are all captured in the documentary Until the Wheels Come Off, which Jenny produced and is currently finalizing before it heads out on the festival circuit with the goal of landing on a streaming service.

The film is an intimate look at John and his crew as they work in tandem to conquer the feat, often referred to as “the Everest of Cycling.” As opposed to the Tour de France, which has multiple stages and daily rests, Race Across America is nonstop. Participants weigh the impact of each of their breaks and rests as they hustle to the next checkpoint to avoid disqualification.

John designed his race as a fundraiser for the Stanford Cancer Institute. Both his mother and sister received care from Stanford and his efforts inspired over $350,000 in donations. The funding was seeded into cancer discoveries and research, supporting programs such as genetic tumor testing, liquid biopsy technology and the immunooncology program.

Describing herself as an accidental filmmaker, Jenny is hoping that the documentary helps sustain contributions while she refocuses on her own ambitions. When she answers the door at home on a recent balmy afternoon, her overalls are splattered in paint, residue from her passion project of painting giant traces of superheroes on canvas. (As well as the occasional Bam! or Pow! onomatopoeias.) Nestled against her chest like a kangaroo’s joey is a newborn kitten that she’s gently fostering before adoption.

Superheroes and caring for others extend deep into Jenny’s genes from her experience as a young person who struggled in school due to undiagnosed dyslexia and ADHD.

“I had a hard time learning how to read as a kid but I did read comic books,” she says. “All types of comic books but I really identified with Wonder Woman. I was born in 1969 and in the ’70s, we had Linda Carter and Lindsay Wagner on TV as superheroes. I’m six feet tall and the idea of being strong with a physical presence was super important.”

Jenny’s dyslexia was identified when she was in junior college and to aid with her disability, she began receiving government-issued 8-track recordings of books that helped with her visual and auditory processing. Listening to the words while she read allowed her to process on her own time. She quickly excelled, rising from a D student to straight As and earning an academic scholarship to Cal Berkeley.

It was there that she met John, and after three weeks of dating, he asked her to marry him. They both graduated from college in December 1991 and were married five weeks later.

Jenny’s first career was teaching English, drama and public speaking at Woodside High School where her motivation was clear: “I am going to make sure that the pain and struggle I went through doesn’t happen to someone else,” she says. “It was from a place of fear—I wanted to protect all the people who were vulnerable.”

She later gravitated to the corporate world, initially at Hewlett Packard, where she shifted into a human resources role, translating her passion for protection towards employees.

“I love that HR focuses on culture and engagement—how to recognize people and reward them,” she explains. “You spend the best years of your life and the best hours of the day at your job. Why not use that time to find joy and fulfillment? That felt like a real calling.”

Jenny and John have raised their three children—Jack, Chloe and Cooke (each of whom were part of John’s road crew during the race)—along with a cast of cats and dogs in a Victorian house located not far from downtown Palo Alto. Jenny’s father grew up on the adjacent street and they chose the house in part because of its proximity to the famed Hewlett Packard Garage.

The home is often full and busy—as Jenny prefers it to be.

“I feel alive just before redlining,” she says. “I seek out situations that are a little bit chaotic. The more cleaning up the better. That’s why I like working at startups; you feel like your hair’s on fire all of the time.”

Jenny is the chief people officer for a startup company called Klaviyo, where she’s currently facing the Silicon Valley version of an endurance race—helping her team cross the finish line to an IPO.

“This is my Everest,” she notes with a determined smile.