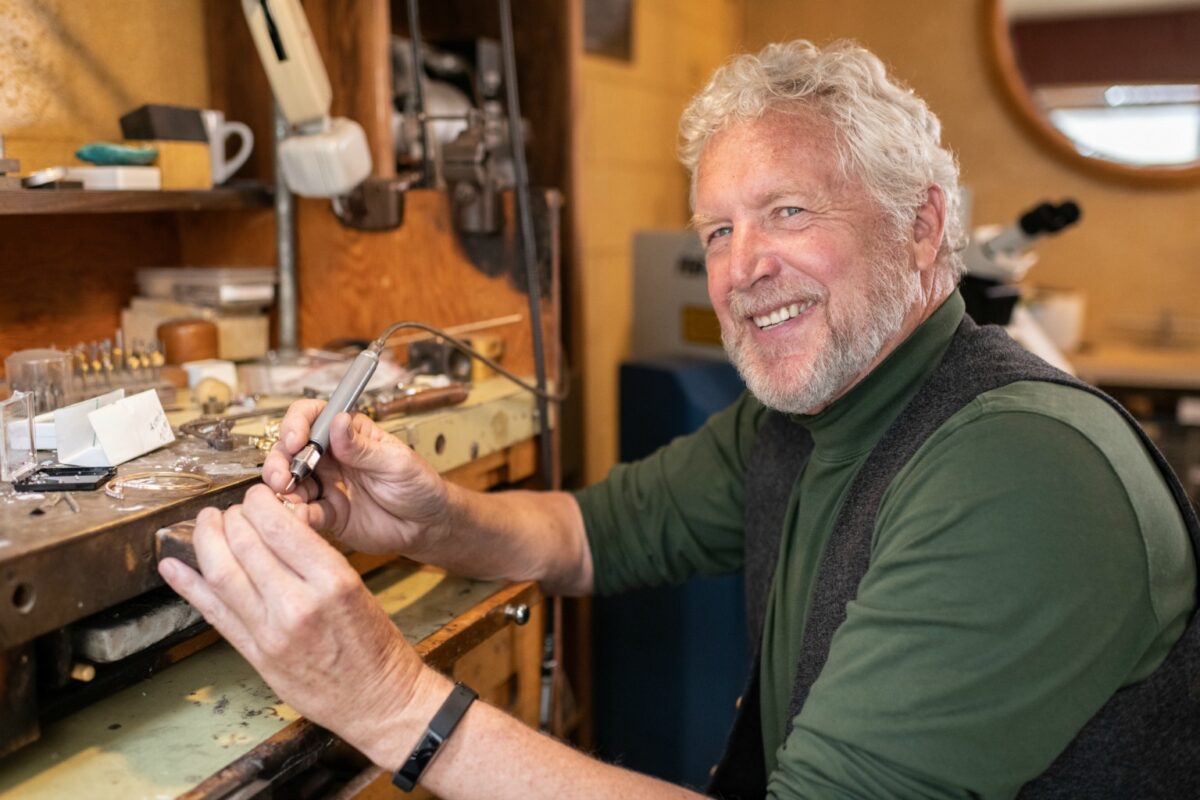 Step into a small design studio in San Carlos and it’s like entering a time machine. Cast your eyes over to the work bench, and you’ll see hand saws, hammers and files forged during the Civil War era. Glance right and there’s a cutting-edge laser welder capable of joining wires the width of a human hair. Blocks of old-school carvable wax sit on a ledge—while on a nearby desk, a keystroke activates the latest computer aided design (CAD) software. This is the work space of custom jeweler Robert “Bob” Hilton, who, like a time traveler, seamlessly shifts between three centuries of craftsmanship.

“There are probably a couple hundred of us in the country who actually have bench skills and CAD skills,” Bob says, addressing the rarity of his skill set. “A lot of the older jewelers are still trying to figure out how to send an email and the new ones wouldn’t know how to hold a diamond in tweezers.”

Coming from a family steeped in jewelry making, Robert’s professional lineage dates back to his grandfather, Walter W. Hilton, who began his apprenticeship at Shreve’s in San Francisco the day before the 1906 earthquake. In another historical twist, Robert’s grandfather (who later became the mayor of Redwood City) moved his jewelry business to a new building on Broadway in Redwood City in August of 1929, two months before the stock market crash.

Despite the series of inauspicious circumstances, Hilton Jewelers endured, selling fine jewelry, along with silverware, watches, clocks, pen sets and shavers. Shortly after World War II, Robert’s father, Walter A. Hilton, joined the family business, and following two older brothers, at the age of 14, Robert started his own apprenticeship. “We had three generations working together. My first brother became a clockmaker, the second one was a watchmaker and when I went in, they said, ‘You’re going to be a jeweler.’” Bob recounts. “We would all work after school, and they banished me to the back where I could get my hands dirty.”

Getting his “hands dirty” as an apprentice meant five years learning an exacting, frequently-confounding and time-consuming craft. Bob spent the first six months turning a little block of silver into a chain, using a draw plate to work it into a 15-foot wire—then hand-crafting link after link, wrapping one around the other, soldering, polishing and repeating, again and again and again. When he was finally finished, Bob presented the chain to his grandfather: “In the old-school way, my grandfather took a torch and melted it all down and said, ‘Do it again. Instead of six months, do it in two months this time.’ They were pretty hard on us. It was mostly, ‘That’s really nice. Now do it again.’” Bob credits that repetitive, intensive training for the delicate artistry and attention to detail that serves him to this day. Initially employed by his family, he ventured out with his tools, working for a large jeweler in Tucson, before opening a trade shop in a retail store and later his own business in Placerville. Next, he journeyed to British Columbia and then Corvallis, Oregon, before moving back to the Peninsula in 2005. “Here I try to keep it simple,” he says. Like his grandfather and father before him, he uses the name Hilton Jewelers, but he specializes in custom jewelry, open by appointment only. Having served his time in every nitty-gritty aspect of the trade, he describes his current vocation as “the happiest profession in the world.”

That’s quite a claim, which Bob backs up by crediting the perfect blend of craft and customer. “It’s pretty rare for someone to say, ‘I just got fired. I’ll go have a ring made,’” he wryly observes. “With custom jewelry, it’s always a good thing happening in life, something wonderful. They’re in love. They’re getting married. They’re celebrating an anniversary. They’re getting a promotion. They have a new baby.”

Customers arrive with ideas, sometimes just a glimmer or feeling about what they want—or even what they don’t want. Then the creative collaboration begins, with Bob learning more about the particular milestone, what the piece will convey, preferred lines, curves and colors, down to the delicacy or taper of a wrist or a finger. He typically works with faceted gemstones. Will it be diamonds, rubies, sapphires or emeralds? Maybe an opal or tourmaline. And while Bob tends toward classic designs that will stand the test of time, “If somebody goes off on a tangent, I want to go too,” he says.

Once the concept is determined, Bob will occasionally make sketches and carve wax models by hand but the CAD revolution radically transformed the jewelry making process. “I can make a design and a whole bunch of renders, lay it all out, make a model and print it out on my 3D printer and the model is ready for casting in a fraction of the time,” Bob relates. “I just did a piece that had 106 diamonds all laid out in a double wedding band with a big center diamond. Even in CAD, it still takes a long time, but doing it by hand, I would be working on it for months.”

Still, the newest tech tools aren’t always better and that’s why Bob is grateful that he can draw from both the past and the present. “I can be doing CAD all day and totally beating my head against the wall, thinking, ‘Why can’t I get this to work out?’ And then it’ll dawn on me, ‘Wait! I’m a jeweler. I can do this in 10 seconds with a saw or a file.’ Being able to marry the two techniques together is invaluable.”

When it comes to actually crafting the custom design—whether it’s a 2½-carat platinum Ceylon sapphire ring with Gypsy-set diamonds or an exact image of a prized show horse captured in a yellow-gold pendent—all the tools come into play, from the classic saws and files used for clean-up work to the laser welder that delivers incomprehensible accuracy. Bob’s favorite tool? Hands down, the microscope. “I would quit the business if I couldn’t use one,” he says. “If you can make it look great under 10 or 20 power, the finished product is just phenomenally better. It looks like magic.” And it’s magic that Bob strives to deliver to every customer—through exquisite, one-of-a-kind pieces that trigger happy memories. At the same time, he cautions customers to remember that it’s not just about them. “I tell them your grandchildren are going to be fighting each other for this ring: ‘She wanted me to have it!’”

Bob knows just how precious family legacies can be, and he still holds himself to the same high standards from his apprenticeship days. “Being a third-generation jeweler is a good way to keep my ego in check,” he reflects. “My grandpa and father both still inspect everything I do in my mind before I deliver it to a customer. I can hear them saying, ‘You can do it however you want… as long as it’s perfect.’”