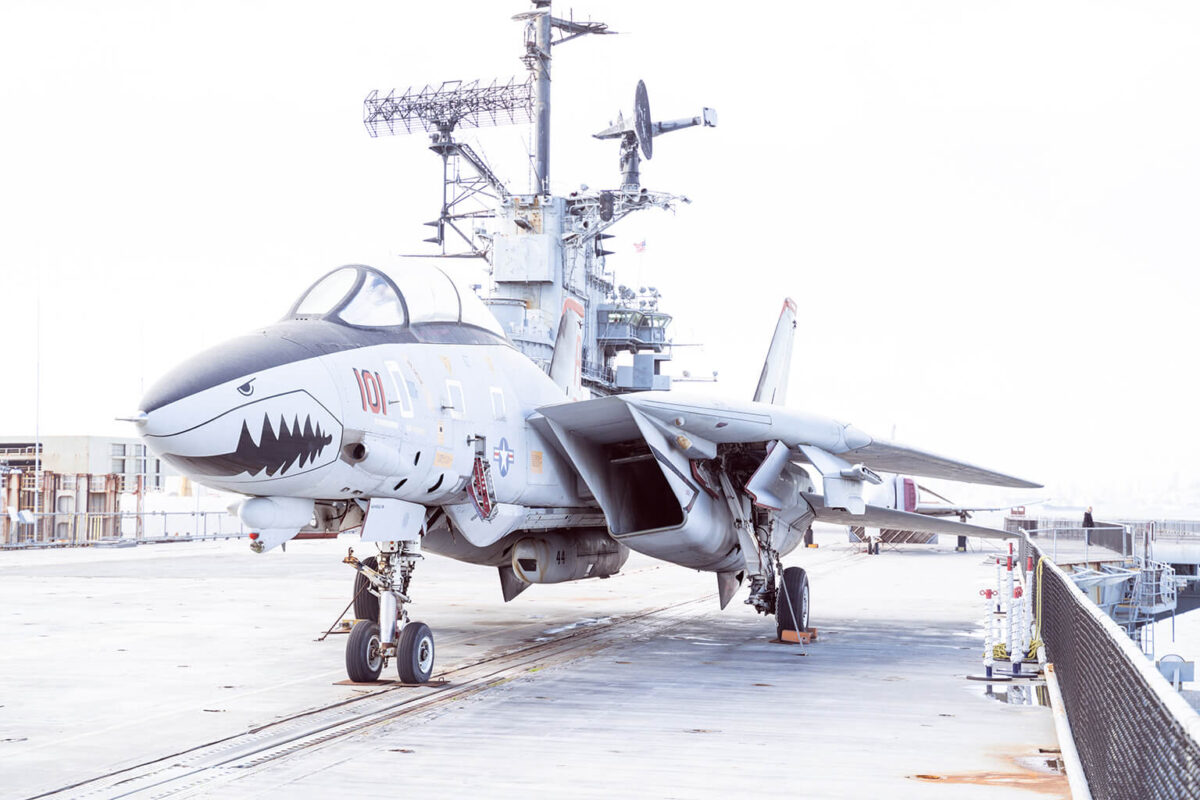 Here’s a bold statement: Alameda may be one of the best—if not the best— destinations for a day trip from the Peninsula. The reason: You’ll visit attractions available nowhere else in the Bay Area.

The town of Alameda is itself distinct. One of 18 islands that dot San Francisco Bay, Alameda started out as a peninsula attached to Oakland. A dredging project that began in the early 20th century turned it into an island.

Alameda’s neighborhoods showcase a mix of 19th century Victorian and Queen Anne architecture along with Spanish stucco homes. You can see them up close by taking advantage of the town’s many biking and walking paths. Before heading out, make sure to download a map: bikewalkalameda.org 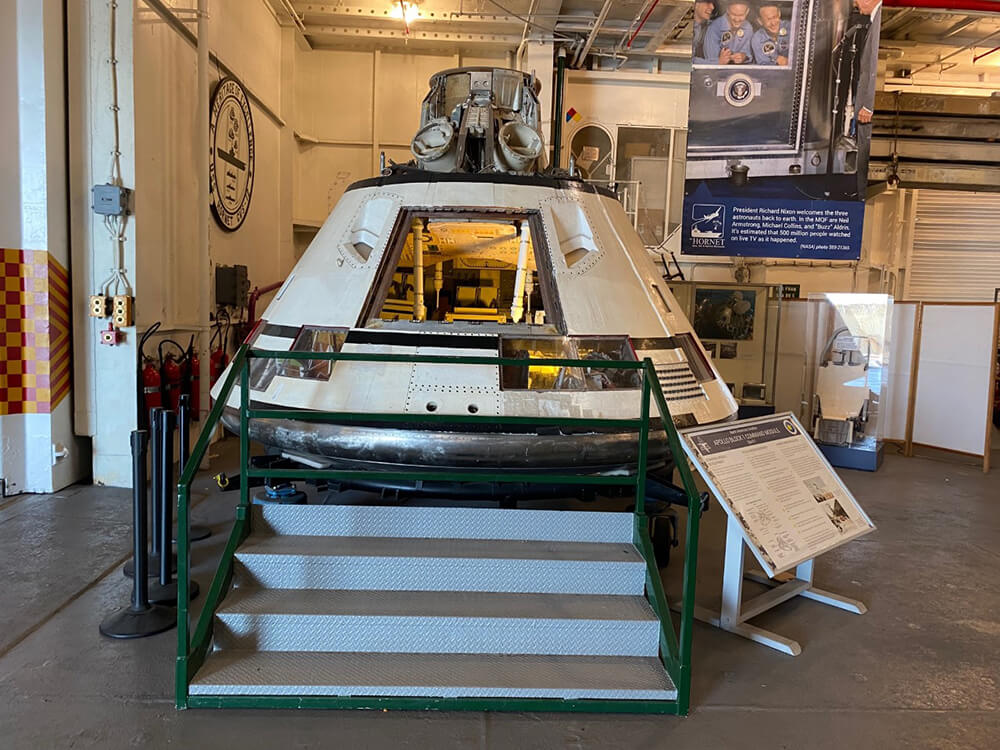 Both a national and California historic landmark, the USS Hornet was built for the U.S. Navy during WWII and served vital roles before being decommissioned in 1970. Approaching the aircraft carrier, located on the southernmost pier of the former Naval Air Station, we’re struck by its enormous size—all the better to showcase aircraft spanning five decades (1940s-1980s).

Now known as the USS Hornet Sea, Air & Space Museum, the attraction displays the majority of the aircraft on the hangar deck, but a few can be found on the flight deck. Thanks to a gigantic elevator at one end of the carrier, aircraft can be rotated up and down—and all can be viewed up close, as they aren’t roped off.

This was particularly impactful when peering into the window of the Apollo command module used for a non-manned, suborbital flight test prior to the Apollo 11 moon landing. It’s hard to imagine three grown men squeezed into the relatively tiny interior!

The USS Hornet was the prime recovery ship for the Apollo 11 and 12 moon missions after they splashed down in the Pacific Ocean.

We spent a good hour on the flight deck with docents Steve Leavell and Tom Krysiak, who were very knowledgeable about all aspects of the aircraft carrier. Their tales made the visit even more enjoyable. Walking the flight deck also provides great views of the San Francisco skyline.

The USS Hornet Sea, Air & Space Museum is open Friday through Monday from 10AM to 5PM 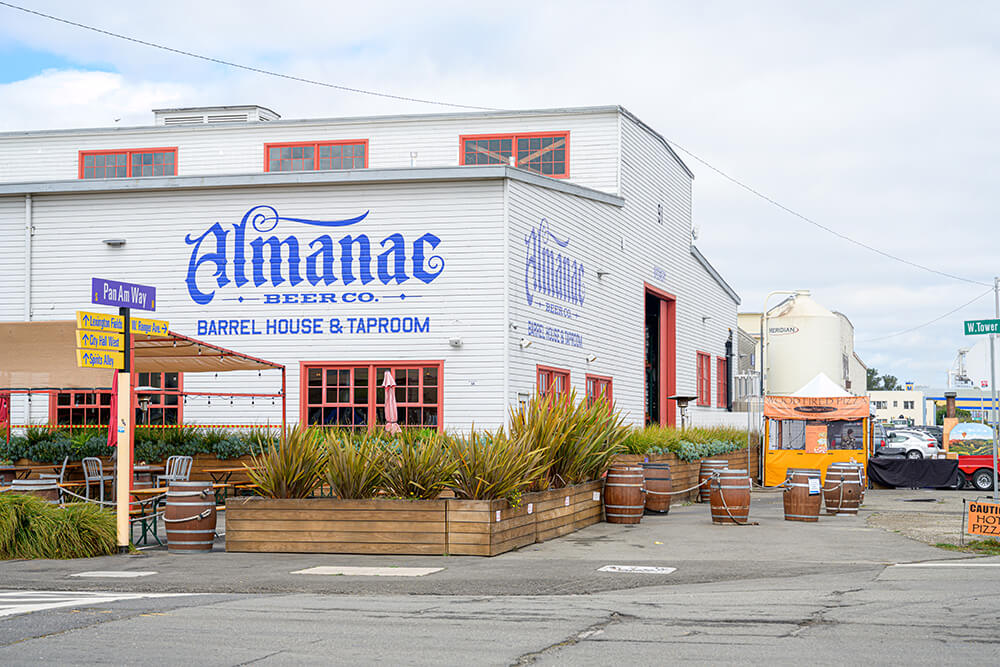 Sip and Snack at Spirits Alley

A friend who’s lived in Alameda for 30 years tipped us off about Spirits Alley, also at the former Naval Air Station along Monarch Street at Alameda Point. Located in historic naval buildings and oversized hangars, this cluster of artisan distilleries and tasting rooms is a popular destination for sipping and viewing.

One way to visit—at least on Friday evenings and on Saturday and Sunday from 1-7PM—is to hop on the free trolley between the Alameda-Main Street and Seaplane Lagoon ferry terminals. Our Alameda insider says it’s quite the bustling scene on Fridays with partygoers coming over from San Francisco.

We visited in the afternoon, so many of the distilleries had yet to open, but we were lucky to stumble upon Almanac Beer Co. with its warm interior and welcoming staff. Housed in a 1942 former naval hangar, Almanac’s offerings include oak-aged lagers, barrel-aged sours and hazy IPAs.

Our luck doubled as the Copper Top Oven food truck was pulled up alongside Almanac, turning out delicious pizzas from its wood-fired oven with cooking temperatures at a sizzling 800 to 1,000 degrees. Owner Tom Gerstel says they are there the first and third Fridays of each month—and sometimes on Saturdays—with wife Kathy running the operation. 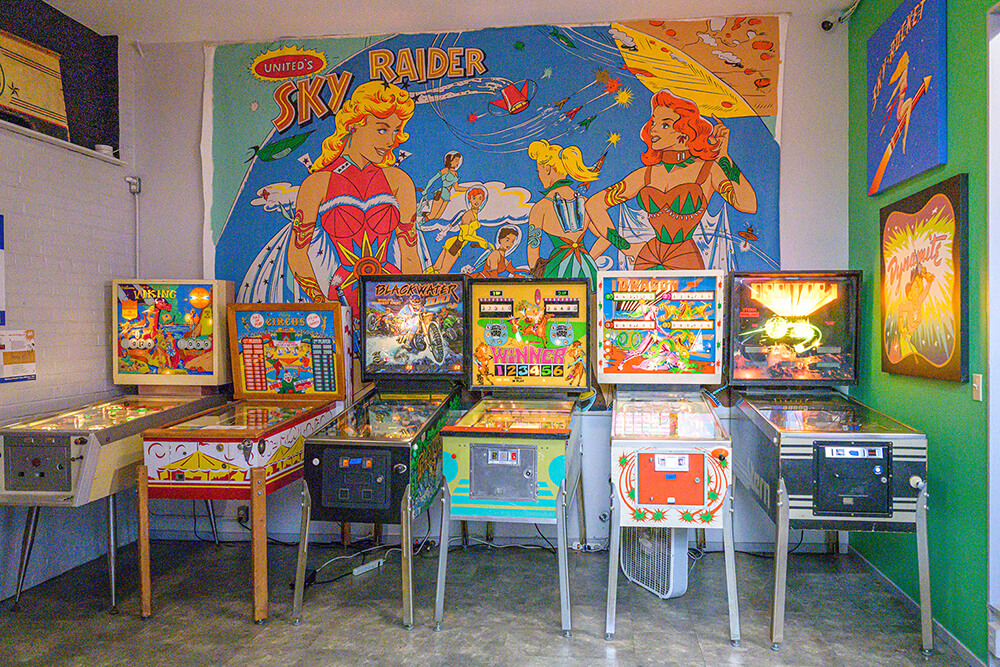 Walk into the Pacific Pinball Museum and you’ll get hit by a blaze of color from every direction. The admission price gets you all-day unlimited play to show off your pinball wizardry amid the pings, chimes and bells of 100 machines. According to executive director (and attraction mastermind) Michael Schiess, the mission is “to teach science, art and history through pinball and to preserve and promote this important part of American culture.”

The machines are arranged by decade, 1940s to the present. While you’re welcome to simply rack up points, there are some fun exhibits featuring aspects of the games that you’ve probably never thought of, such as the Pointy People exhibit. Pinball machines took on a new aesthetic in the mid-1960s, characterized by angular abstracted figures, ergo pointy people.

The newest exhibit is called Oddball—Experiments in Pinball Design, which focuses on games with strange, non-traditional features and designs. The Orbitor 1 Stern is an example. “In the early 1980s, video games were replacing pinball. After seeing an exhibit demonstrating Einstein’s theory on gravity and its effect on space/time, a pair of freelance NASA engineers became fascinated and convinced it could be made into an unusual game,” explains marketing manager Russell Moore. “A small team worked with sculptors and makers to develop a functional prototype of a space-themed pinball machine.” Apparently, only 889 units of this unusual game were produced, making it a rare find for public play.

Next on tap is the reopening of the Member’s Choice room featuring 12 games chosen by museum members from the museum’s collection of 1,500. The games will span five decades and bring the grand total of playable pinball machines to 102.

Top It Off With a Scoop

Tucker’s Ice Cream is an Alameda mainstay, having been a fixture on Park Street since 1941. With the motto, “Life is uncertain, eat dessert first,” the long-running shop is known for its creamy homestyle ice cream. Make sure to swing through the town’s business center for a scoop before heading off the island.