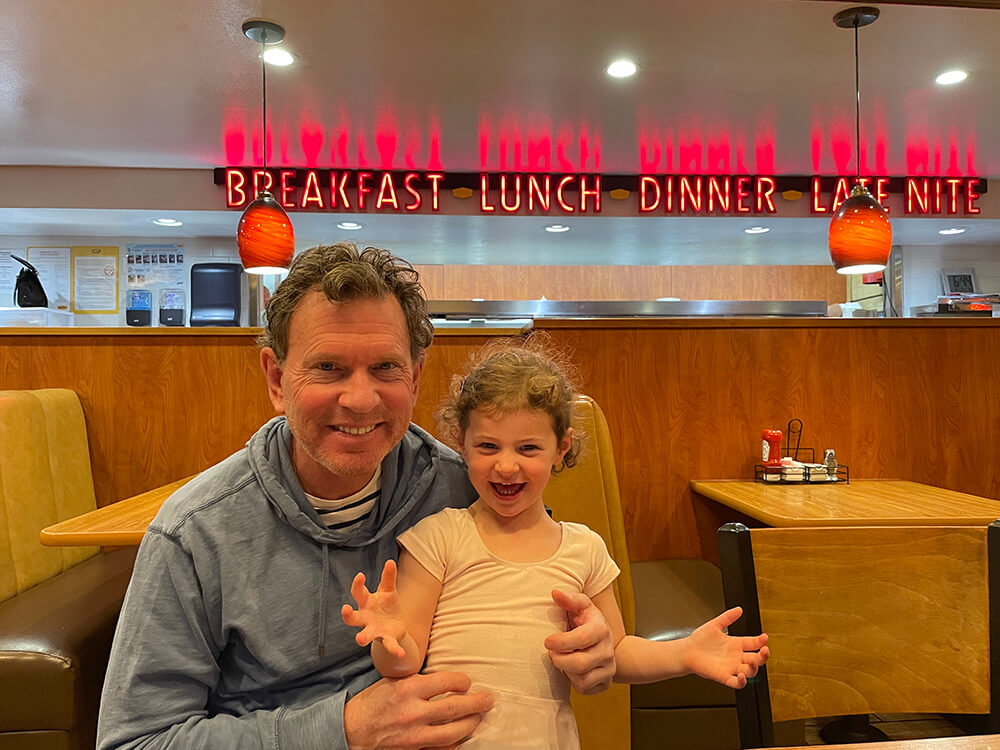 I’ve been watching a lot of Norm MacDonald on YouTube lately. I like the guy—his unique wit and unapologetic jokes. Of course, Norm’s dead now; he died too young for such a gifted comedian. He brought such life to the world. In a video I was watching the other night, he said, “We are so lucky to be alive. It’s the greatest gig in the world. You get to eat at Denny’s…”
It’s as though he read my mind.

When my children were young, our Sunday night ritual was to go out to dinner with our good friends the Gessows—Jody and Rhonda and their kids Jeremy, Danielle and Julie. Our children were friends from birth. For years, we’d head over to Ken’s Pancake House in Menlo Park before they changed it to a fish restaurant and then to another fish restaurant and then to something else and now it’s Jeffrey’s Hamburgers.

I’m not sure Ken’s was especially pleased to see us with our seven rambunctious kids, though Sunday nights were slow, and we’d always leave a good tip. It was the type of place with Formica tables, a “pie of the day” and paper menus for the kids to draw on.

Our children were sweet-tempered but, well, they were still kids, and they would have a time at the place, throwing crayons across the table, spilling water and tearing open and eating the sugar and jelly packets. Inevitably, the boys would start chasing each other through the restaurant, and we’d have to tell them to quiet down so that we wouldn’t seem like degenerate parents.

When we learned that Ken’s was closing to make room for the first fish restaurant, we had to pivot and that took us to the Denny’s in Redwood City at the corner of Woodside Road and Highway 101. The kids continued where they left off, being high-spirited and loud with no one seeming to mind too much.

Eventually, our Sunday nights went the course of youths growing up and lives changing. But it was a good run. The children remain tight friends today since pancake-bonding lasts a lifetime.

Recently, the one day I dread each year, my birthday, was approaching. I’m not sure why I dislike it so much, whether it means another year of my life flying by or because I don’t like attention, but I much prefer the day after my birthday.

Each year, one of my kids will ask, “Where do you want to go for your birthday?” meaning which restaurant. I never have an answer. When they asked this year, given our plethora of grandchildren, I think the kids thought I’d probably want them to get babysitters, put on nice clothes and head out for an adult dinner. But I couldn’t imagine having my birthday celebration without the little guys.

Instantly, I knew where we were going. I told my youngest daughter, “Denny’s, with all the kids.” We made a plan: a non-reservation at 5:30PM (which is when you eat when you have six kids three and under).
My children kept asking me if I really wanted to go to Denny’s. “Heck, yeah,” I said, already salivating for the Grand Slam breakfast.

We arrived on my birthday night, and the host promptly put a half-dozen tables together in the middle of the room with eat-in booths on either side of us. There weren’t many people there: a couple of older folks enjoying the special senior menu and a few families. We pretty much had the place to ourselves.
Within minutes of sitting down, the grandkids were up and about, climbing in the booths, using them for trampolines and reaching for those familiar sugar packets and tubs of jelly. The waitress was incredibly good-natured, and we tried our best to keep things under control.

The Denny’s menu is amazingly broad—from eggs to steaks to anything in between. But we all had a good idea of what we wanted, so it didn’t take us long to decide. Soon, what the kids had been waiting for all day arrived: strawberry milkshakes. And then our sweet waitress, who referred to each of us as “Dear,” brought out the chocolate chip pancakes, macaroni and cheese, French fries and other good stuff. I had a perfectly tasty eggs Benedict with crispy hash browns.

It was a perfect night at the perfect place and, of course, reminded me of our wonderful Sunday nights with the Gessows. Walking out of the restaurant—with a lift in my heart—I realized that I’m not happy when I’m supposed to be happy. I’m happy when those whom I love are happy. And Norm was right. Boy, am I lucky to be alive.