Seed pods turned art. Chandeliers shaped like tree branches. Reclaimed walnut slab tables. Designer Kimberly Larzelere brings the outdoors inside with seamless style and an artful eye throughout the Peninsula. By incorporating materials such as wood and stone, Kimberly creates an organic feel in her room designs, many of which feature collapsing glass walls that join homes with the backyard. “I love the open floor plan with the interior opening to the exterior,” she notes.

Kimberly’s interest and ease with natural elements comes from a life spent outdoors as an avid cyclist, runner and hiker. “I also grew up living on a ranch with horses,” she adds. “As a kid, I competed in vaulting on horseback near Santa Cruz.” Her time outside has translated into a love for the diversity of materials in nature that she uses in her work. 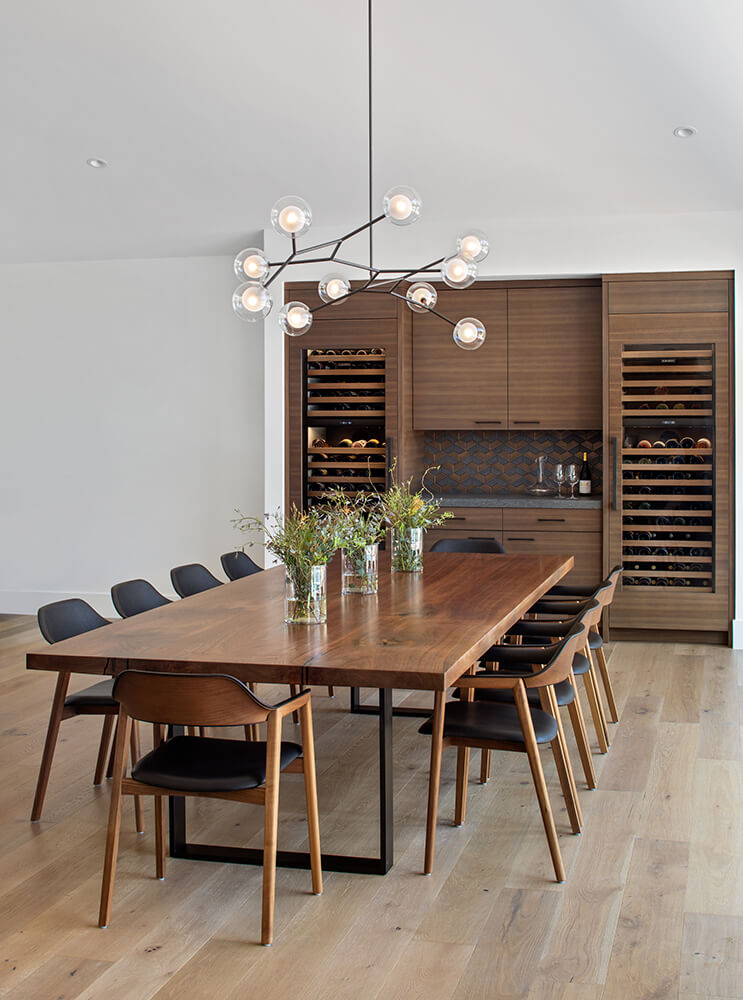 A longtime local designer, Kimberly began her career as a kitchen and bath expert in Hollywood and then San Francisco, eventually opening a kitchen and bath design studio in Menlo Park. Her clients continually requested her expertise to redecorate their entire homes and soon her full-service studio, KL Interiors in Menlo Park, was born. “I love creating spaces that really function for families as their children grow,” she emphasizes. “People want to live in their houses, not just look at them.”

Two recent modern interior design projects in Los Altos and Palo Alto showcase Kimberly’s clean, classic style with a modern twist. “These projects feature indoor/outdoor elements that create durability,” she explains. “I am always evolving and developing my skill set. The environments I create tend to have calming color palettes with lots of organic materials and some mid-century influence—a recent aesthetic that I really enjoy.”

In Los Altos, Kimberly worked on an extensive remodel with a client seeking a mid-century, casual feel. “We remodeled the home by creating a really unique and durable space that made it functional for the family,” she says.

“We were able to transform the floor plans and existing space into everything the client wanted.” To add continuity between the exterior and interior design, Kimberly used board form panels on the pool waterfall to match the one on the fireplace inside. She also created consistency with matching steel beams on the outside of the house and in the living room, where she included an Eames chair and ottoman to inject mid-century character. And she deployed disappearing glass doors to open the remodeled home completely to the outdoors and pool area. By using a platinum wall-sized slab of stone rather than wall paper in the powder room and adding a concrete sink, she achieved a rustic, yet elegant feel. In the dining room, the light fixture over the table serves as a focal point with organic steel elements that look like tree branches. 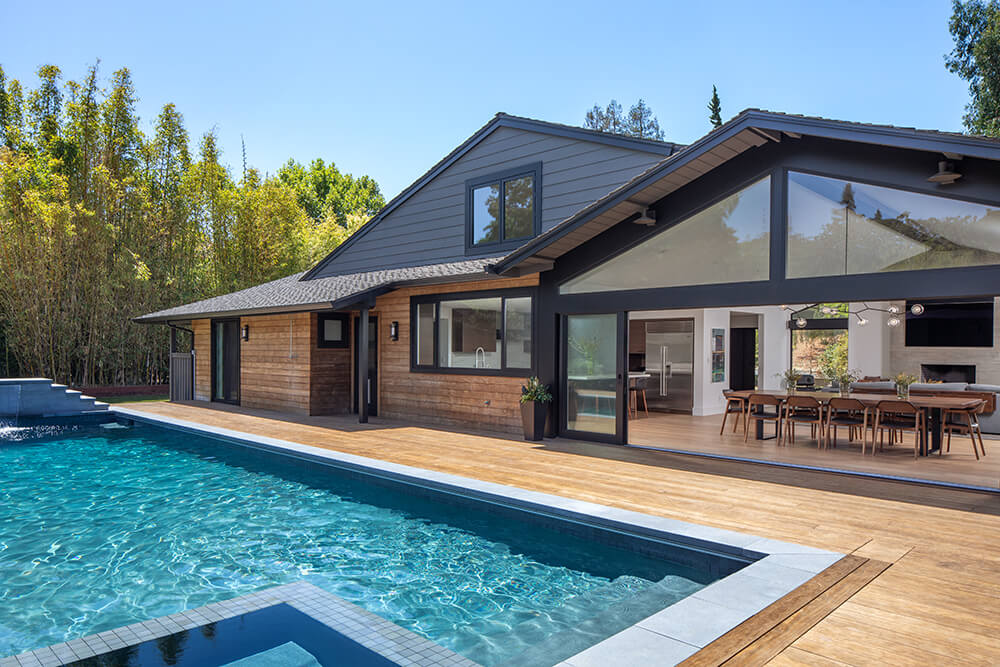 In Palo Alto, Kimberly took on the challenge of designing the interior of a large new home from the ground up. To connect exterior elements of the home with the inside, she incorporated mahogany and steel used on the outside of the house and the floating staircase into the kitchen cabinetry and stove hood. “The client loves to cook and bake, making it very important that the countertops are hard-wearing, so we chose quartzite,” she relays. “When the kitchen was done, the owner was so happy that she gave me a cooking class and taught me French baking techniques.” In the living room, Kimberly selected art made from elements in nature such as found resin and poppy pods. In the dining room, a contemporary chandelier spotlights the reclaimed Northern California walnut slab dining table.

One of the quandaries Kimberly faced with the home was hiding a large air return vent directly off the entry. Her solution: camouflaging it as an architectural feature by designing a bench with decorative slats that allowed for air circulation. “A big part of my job is solving problems. I am type A and always on the move, making stuff happen,” she smiles. “I get materials on site and stay on or ahead of schedule—that is my M.O.” 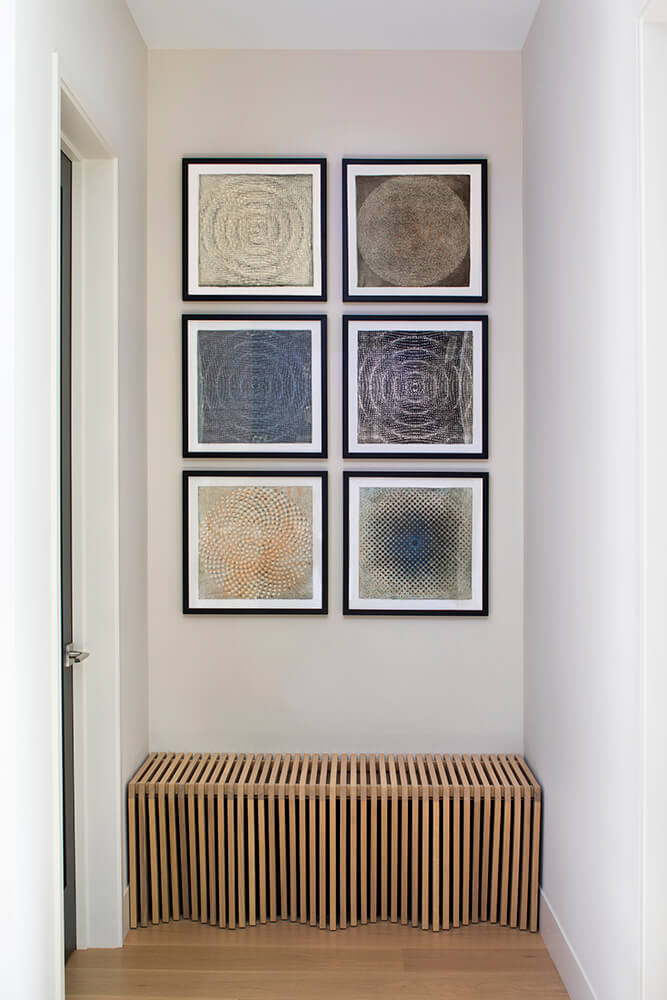 Contrasting Peninsula design today with trends over the past decades, Kimberly sees a dramatic difference. “When we designed years ago, houses were more compartmentalized,” she reflects. “Kitchens were separated and you had formal spaces. Now, the cooks want to be included in the conversation. I go into some of these houses and knock down walls to create inclusive spaces.” As Kimberly sees homeowners ditching the living room for great rooms, she’s also factoring in the inclusion of one or two home offices.

To give back to the community, Kimberly volunteered her design skills to the Lucile Packard Stanford Hospital’s Ronald McDonald House expansion several years ago. She designed the workout room as a haven for families to relieve anxiety. “Working out helps me manage stress,” she says. “I wanted to help others find that same relief.” In her free time, Kimberly dabbles in her own home renovation and recently remodeled a rundown cabin in Arnold. “I took an old, disgusting house and made it into a modern cabin,” she reveals. “I also refurbished a dilapidated house in San Francisco, while trying to keep the character of the home intact.”

Now based in San Francisco with a Peninsula focus, Kimberly’s life outside of work complements her job as she enjoys hunting for new sources at artisans events throughout the Bay Area. Her love for traveling abroad also allows her to find one-of-a-kind treasures that she uses in projects. “My home is filled with art from a trip I took to Cuba,” she shares. “When traveling in Peru, I found pillows at a local market that worked for a recent project. Sometimes, the process is just as fun as the final product.”