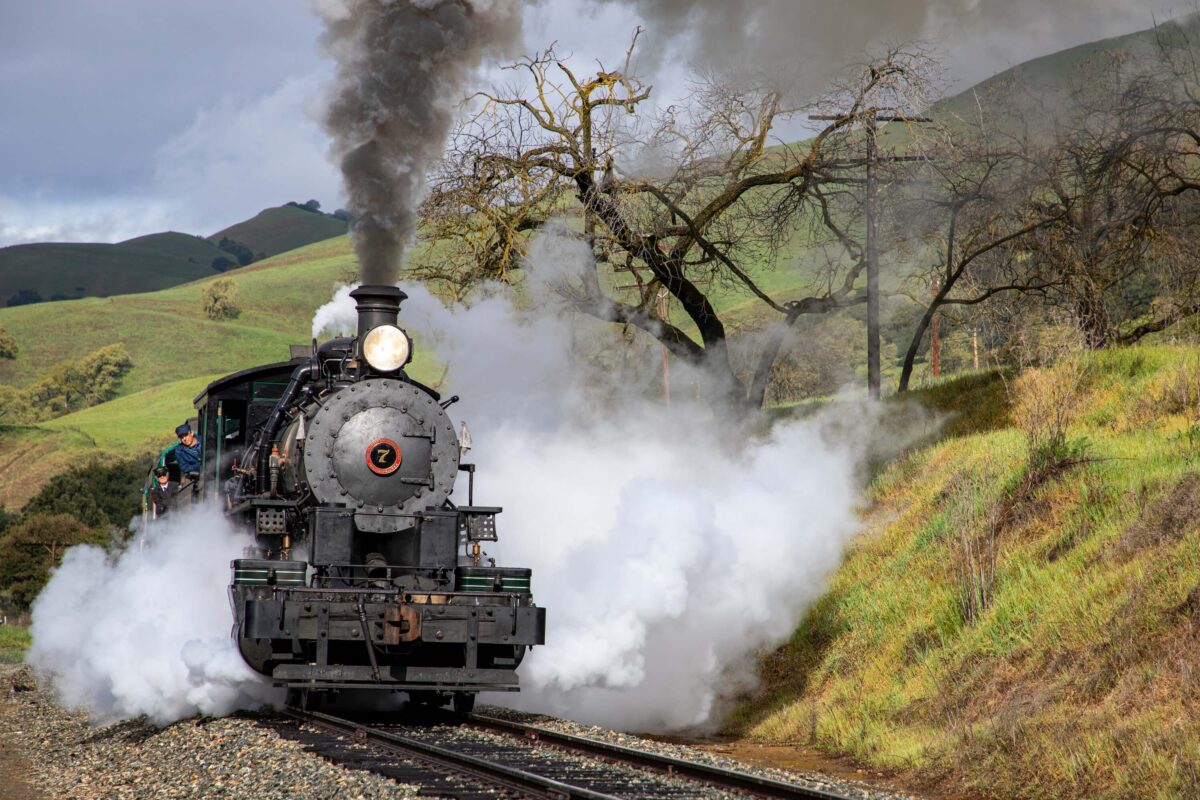 Hear “Niles” and you might think “Railway.” Indeed, riding the Niles Canyon Railway is a great reason to take a trip across the San Mateo or Dumbarton Bridge. But it’s not the only reason, as we recently discovered on a day’s excursion.

Niles, a Fremont neighborhood located between Mission Boulevard and Alvarado Niles Boulevard, is also home to one of the earliest movie studios, a portion of the Alameda Creek Trail, a main street lined with antique shops, one of the best pizza parlors in the Bay Area and fabulous ice cream and coffee.

That said, the Railway is a good place to start, especially in April when the canyon is green and wildflowers are abundant.

Riding the Niles Canyon Railway is a chance to experience history as the tracks run along a portion of the first transcontinental railroad constructed by the Central Pacific Railroad. In 1869, four months after the golden spike ceremony at Promontory Summit, Utah, the San Francisco Bay Area was connected to the rest of the country with the completion of this section of tracks.

A freight terminal was built by the Central Pacific at the west end of the canyon and the town of Niles, named for Addison C. Niles, a prominent judge and former railroad attorney, sprung up around it. The Central Pacific became part of the Southern Pacific, which operated trains through the canyon for 12 decades until 1984.

In May 1988,  the all-volunteer, nonprofit Pacific Locomotive Association brought railroad passenger operations back to Niles Canyon. The organization continues its work to extend and maintain the track along the line, restore its collection of railroad equipment and operate historic demonstration trains. The enthusiasm of these volunteers adds to the experience of riding the train.

We rode the railway accompanied by a “this-is-kind-of-fun” six-year-old girl and her very enthusiastic three-year-old brother, who beamed from ear to ear. We recommend opting for the steam engine-led train, all the better to hear the clickety-clack of the tracks. And there’s something about the smell of the steam along with the huffing and puffing that adds to the enjoyment—especially in the open-air cars.

+ Limited-capacity trains powered by the Robert Dollar #3 steam loco-
motive or the Southern Pacific #1423 diesel locomotive depart from
Sunol Depot at 10:30AM and 1PM on Saturdays and Sundays
in April and May.

+ Tickets must be purchased in advance.

Ambling the Banks of Alameda Creek

What has prompted trips to the Niles area in the past is nearby hikes, some that require a good deal of climbing. This time we opted to stay at sea level, more specifically creek level, walking the Alameda Creek Trail.

Parking at the Niles Staging Area, we purposely walked in the “wrong” direction. The pavement ended and soon we felt like Niles Canyon was cradling us in its warmth and beauty.

We retraced our steps walking westward along the paved path towards the town of Niles accompanied by our leashed dog. On the south side of the Creek, the trail extends 11 miles all the way to Coyote Hills Regional Park along San Francisco Bay. This is a great 22-mile out-and-back ride for cyclists.

At various historical markers along the way, we learned that the Ohlone-speaking Tuibun tribe thrived for many generations along the Creek. And that the area was visited and explored by members of five Spanish expeditions between 1769 and 1795.

Alameda Creek was the boundary of the 30,000-acre Mission San Jose de Guadalupe and the 17,000-acre Rancho Arroyo de la Alameda, which was granted to Jose de Jesus Vallejo. Construction of a flour mill near the mouth of Niles Canyon by Vallejo, plus the importance of the canyon as a passage through the hills, led to the growth of Niles in the 1850s.

Walking along the Creek is a very pleasant amble, uncrowded on a weekday. It’s just 1.4 miles to Kaiser Ponds, which hosts the Model Mariners boat club, and two miles to Shinn Pond, the first gravel pit in California, which provided gravel to build the UC Berkeley stadium—75 carloads in just the first order!

+ Trail is paved on the south side; the north side is unpaved.

+ Swimming in Alameda Creek is not allowed.

We don’t remember how we first stumbled upon Bronco Billy’s Pizza Palace, which serves up some of the best pizza in the entire Bay Area. But a stop there is now mandatory on any visit to the area. My husband is a fan of the Bull Durham (salami, pepperoni, linguica, sausage and beef). My preference is the Stage Coach (chicken, fresh garlic, ranch dressing, mushrooms and red bell peppers). The various pizza combinations are available by the slice and in four sizes; given the size of the small, the extra-large must feed an army.

On this visit, before ordering “to go,” we took time to walk around the town of Niles. And to our amazement, we discovered that Bronco Billy was a real person. Gilbert “Bronco Billy” Anderson was the first Western movie star cowboy. In 1958, he was awarded an honorary Oscar, which is now on display at the town’s Niles Essanay Silent Film Museum.

It was Bronco Billy who lured Charlie Chaplin to Niles, where he made five films for the Essanay Film Manufacturing Co., including The Tramp. The scene where Chaplin waddles away from the camera was shot in Niles Canyon. Filmmaking continued in the area until talkies became popular, and the studio’s proximity to train tracks became problematic.

The Silent Film Museum is home to 400 silent feature films and over 600 silent short films, along with a collection of 10,000 film prints. Museum programs are currently available for viewing at nilesfilmmuseum.org, and the website says they’ll “re-open sometime down the road when the stars are right.” At that time, film enthusiasts will once again be able to watch silent movies in the museum’s Edison Theater built in 1913.

Knowing that we were ordering pizza to take back to the Peninsula, we didn’t buy ice cream at Nature’s Organic but can recommend the parlor known for its exotic flavors. Black Sesame, anyone? Or how about Cardamom Pistachio Kulfi?

The walk around town led to a new discovery, Devout Coffee. Its interior is sparkly modern, and its coffees come from unique places. We brought home Flora de Selva from Peru. Other choices include beans from Ethiopia, Honduras and Rwanda, along with mainstay Columbia.

What better way to end a visit to the Niles area than a stop at the Niles Depot Museum located at the Niles Town Plaza? Open on Sundays, its focus is on the Southern Pacific and Western Pacific Railroads but it also has memorabilia from Union Pacific and Amtrak, which actually passed through town just as we approached the museum.