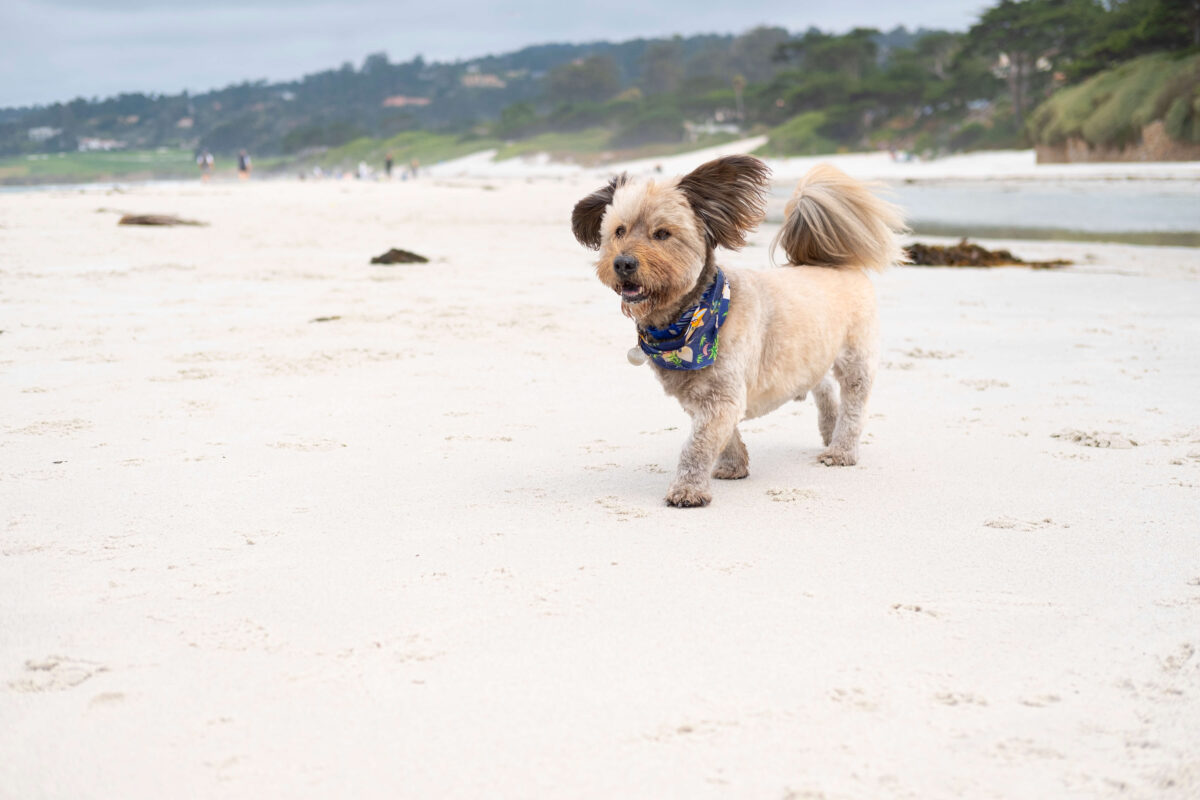 “Hi cutie!” a complete stranger calls out as we’re strolling down Ocean Avenue in Carmel-by-the-Sea. “What a doll!” is the incoming utterance as we walk up the steps from the beach. Seated at a courtyard table, we hear, “Hey sweet thing!” followed by some kissy sounds.

What sounds like incessant catcalling doesn’t offend us—given that these comments are directed at our dog.

The object of all this attention looks up from her perch under our table, where she’s resting her head on her paws. “Her name is Teddi,” my husband says, acknowledging yet another affectionate greeting on her behalf.

Clearly, Carmel is an amiable destination, but there’s an underlying theme that compounds the friendliness: a genuine love of dogs. You don’t need a canine companion to enjoy a visit here, but if you have one, this is a town with a well-deserved reputation for rolling out the water bowls and biscuits.

Frequently referred to as the #1 dog-friendly town in America, Carmel traces the roots of that moniker to Hollywood legend Doris Day. The actress became enamoured with the Monterey Peninsula while filming the1956 film Julie and returned to Carmel to live in the early 1970s. “I’ve never met an animal I didn’t like,” Day once famously said, “and I can’t say the same thing about people.” In 1987, when the animal advocate partnered with Dennis LeVett to co-own Carmel’s Cypress Inn, she had one stipulation—that the hotel extend its welcome to dogs. Headlines around the world barked the news, with the California coastal community trailblazing the pet-friendly travel trend.

Twenty-five years later, Carmel is still leading the pack, as evidenced by the town’s numerous dog-friendly hotels and inns, restaurants, stores, tasting rooms and galleries. “To find a place where you can go that you love and bring your dog comfortably is a huge draw for people,” notes Amy Herzog, executive director of Visit Carmel. “You see a lot of camaraderie because dog people tend to bond with each other.”

Sniffing out the Fun

After the two-hour drive from the Peninsula, we are eager to stretch both two legs and four. At roughly one square mile set along Carmel Bay, Carmel-by-the-Sea is a walking destination. Thanks to plenty of unrestricted parking on residential streets, there’s rarely a need to move your car. With Teddi on leash, we beeline it for Carmel Beach, getting a preview of what will become the weekend’s slower-than-usual pace.

How much do canines love Carmel? Judging by the number of intriguing smells—blades of grass, the roots of a tree, a magazine stand, something in the gravel—the answer is a dog-gone lot. We’re here to relax, so we let Teddi sniff a path to the Pacific at her leisure. With access points at the end of Ocean Avenue (including public restrooms) and along Scenic Road, the iconic beach is easily reached from any direction.

Our shoes quickly come off, followed by our seven-year-old Labradoodle’s definition of true liberation: the removal of the leash! Teddi scampers off to play with the other pooches on the one-mile crescent stretch of Carmel Beach. For obedient dogs under voice command, it’s a legal off-leash nirvana: a pair of black Labs chase balls into the surf, tail-wagging Doodles gleefully romp and a Bulldog puppy gets his first taste of sand.

For another leash-free outing, we explore Carmel’s Mission Trail Park. With a trail system of over 30 acres, the park offers two entrances—via Mountain View Avenue or across the street from Carmel Mission Basilica. After we wrap up our hike, we hear the mission bells ringing and venture over for a closer look. First built in 1797, the national historic landmark is also the final resting place and shrine of Saint Junipero Serra.

After full, active days, there are plenty of choices for resting the dogs, so to speak. With more than 25 canine-welcoming hotels and inns, options range from boutique luxury at the Cypress Inn to cozy B&Bs. Originally built in 1929, the Cypress Inn is a Mediterranean-style landmark, offering 44 guestrooms and suites. The decor evokes the feeling of old Hollywood and Doris Day fans will relish the lobby’s memorabilia and movie posters including Pillow Talk and That Touch of Mink.

Teddi receives an enthusiastic welcome at check-in: “Do you need any dog blankets or bowls?” In the morning, the Inn’s complimentary buffet-style breakfast (with fresh house-made popovers) is served by dining room staff. We carry our trays to outside seating in Terry’s Restaurant & Lounge, instinctively smiling at a couple with an Australian Shepherd and a gentleman with three Corgis. We find it easy to imagine Terry’s Lounge in less restrictive times with its festive afternoon “Yappy Hour” featuring live music and “muttinis.”

Other popular dog-friendly accommodations include Carmel Country Inn with one- and two-bedroom suites and romantic studios, The Getaway, a favorite pick for families, and the Lamp Lighter Inn, a B&B with charming cottages tucked into a grove of trees.

An artists’ haven with more than 100 studios and galleries, Carmel is known for its quaint cobblestone streets and eclectic mix of locally-owned boutique shops and stores. Steps away from the Cypress Inn, Teddi catches a scent and we follow her into Carmel Dog Shop, which opened on August 1. We are greeted by the owner Cindy Montgomery, who was born and raised in Carmel. A former buyer and general manager for other local dog stores, Cindy shares that she was laid off in January.

After “sitting around and feeling sorry” for herself, the lifelong dog lover decided to hang out her own shingle. “I couldn’t be happier,” she says. “We have everything from tennis balls and frisbees to RN Design dog collars with real crystals.” We take in the shop’s treat bar, greeting cards, plush toys, grooming products and stylish canine clothing. “We even have a dressing table for the dogs to try on outfits,” notes Cindy, “so you don’t have to get down on the floor.”

The art-size photography on the walls also draws our attention—portraits immortalizing what it means to live a dog’s life. Love Dog and Co. pet photographer Liz Stavrinides has a dedicated space in the store. “I do studio shoots here, I do beach shoots, I go to people’s homes,” Liz tells us. “The biggest takeaway of photographing dogs is that you have to be very, very patient—you want to capture their souls through their eyes and their expressions.”

The Dish on Dining and Wine Tasting

With its many outdoor courtyards, Carmel lends itself well to dog-friendly dining opportunities. In recent months, cue the addition of tents and heat lamps, tables lining the sidewalks and parklets popping up in the streets. “Now that every restaurant has outdoor dining,” Amy explains, “almost every restaurant is considered dog-friendly as well.” With Teddi happily ensconced at our feet, we pluck garlic-steamed clams from their shells at Flaherty’s Seafood, share a hefty potato pancake topped with Monterey Bay salmon at Stationæry and dip pita bread into a tangy hummus at Dametra Cafe. Although we always arrive equipped with Teddi’s kibble and a bowl, we encounter a common query: “Would you like to see our doggy menu?” Judge away, but you try resisting those ever-so-hopeful golden brown eyes. Amidst the lush garden and brick fireplaces at Forge in the Forest, we chat over a fresh burrata appetizer, while Teddi chows down on a ‘Quarter Hounder’ hamburger patty.

On the libation side, Carmel’s nearly 20 tasting rooms offer the chance to sample some of the region’s best varietal wines. Even with new outdoor tasting venues, restricted capacity means it’s highly recommended to reserve ahead. Over the course of the weekend, we stop by Carmel’s first tasting room, Galante Vineyards, which offers a tucked-away rustic setting and a five-wine tasting menu capped by a 2014 or 2017 “Blackjack Pasture” Cabernet Sauvignon. On a recently-constructed deck, we enjoy al fresco street sipping at Albatross Ridge. And we count ourselves lucky to secure one of two tables at Silvestri Vineyards on 7th Avenue. Founded by Alan Silvestri, the award-winning composer and conductor of film and television scores, and his wife Sandra, Silvestri Vineyards features wines grown, produced and bottled from the family vineyard in Carmel Valley.

It bears repeating that you can fully enjoy Carmel’s pleasures without a dog—but if you’re a dog lover, this is a town that sincerely loves you back. “Dogs are the new kids,” Cindy observes, as she offers Teddi a complimentary nibble while we chat at Carmel Dog Shop. “If you love your dog, it’s like your kid—and if you go on vacation, you don’t want to leave your dog behind.” Watching Teddi happily crunch on a Sweet ‘Paw-tato’ treat, it’s a fair bet that any dog would agree.