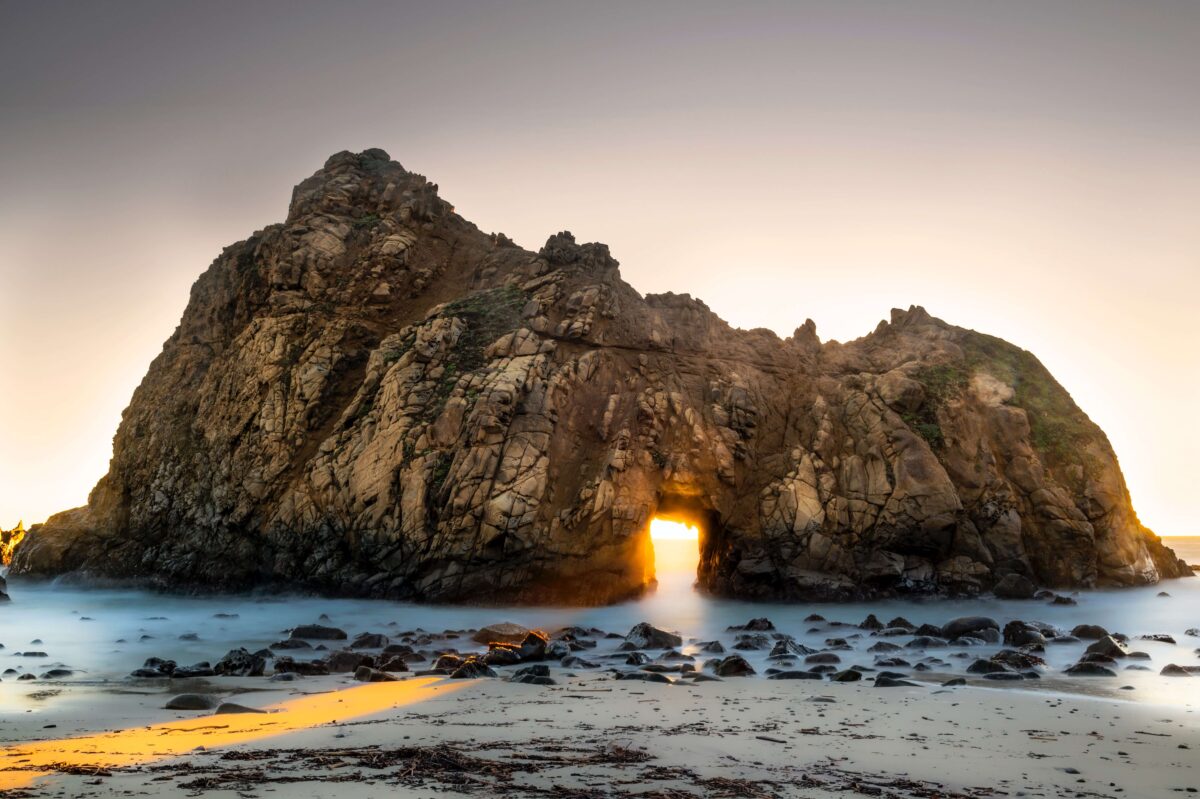 The 90 miles of coastline that cradles Big Sur is an assembly of the elements. One side has vast forestation sprung from craggy peaks that tumble westward for the inevitable cascade into the Pacific. At this crux lies the iconic roadway offering up continuous vistas for beholding the splendor.

No surprise that Big Sur is still considered “the greatest meeting of land and water in the world” more than 100 years after watercolorist Francis McComas first coined the enduring description. Some beauty is untethered to age.

An afternoon of absorbing fresh perspectives demands a sunset of internal contemplation and no other venue on the Big Sur coastline is better suited for this activity than the natural baths formed by hot springs found along the cliffs within the Esalen Institute. Eye to eye with a setting sun, I’m floating in tranquility while engrossed in the elements.

Pretty soon I’m met with a startling juxtaposition. I hover in a heavenly pose as thunderous waves crash far beneath me—amplified by a clever design in acoustics created by the cement structure to reverberate the ocean waves—all the while inhaling a foul stench emitted by the all-natural, sulfuric hot springs.

Even in heaven, I muse quietly to myself, is the smell of hell. The odor is minor and fleeting against the wind as a weekend in Big Sur presents itself with the new light of an inbound day.

A Bed of California Stars

You wouldn’t visit New York City to then sleep on Staten Island, so why limit your evenings in Big Sur to anything short of excellence?

The Alila Ventana Big Sur takes center stage along the coast and sits perched above its cliff-hugging neighbor, the Post Ranch Inn.

The Ventana is an intimate retreat that reveals an ambiance of relaxation as you climb the winding road from Highway 1 onto its 160-acre property. Complementing the region’s diverse natural offerings, there are rolling meadows, groves of redwoods and a constant oceanic view. Two dining options, the Big Sur Smokehouse and The Sur House, sit within the property to create a holistic experience with no need to wander far.

Leaving nothing else to be desired, my room provided numerous avenues for serenity, from the egg-shaped bathtub to a personal three-foot hot tub. The suites are thoughtfully decorated to reflect the arboreal presence outdoors and a repetitive symbol of circles creates a consistent sense of unity. The plush bathrobes provide a hooded covering to promote privacy when passing through the grounds, suggesting that guests of the Ventana may be of certain celebrity stature. (Rumors of a recent visit by a world-famous country-pop star were swiftly confirmed.)

Tapping into the experiential travel market, the Ventana has begun offering a variety of excursions that range from guided tours of Jack Kerouac’s former stomping grounds to mushroom foraging in the nearby undergrowth. I opted for an afternoon in the surrounding oak tree forest with Master Falconer Antonio, who introduced me to his roster of raptors.
The Falconry experience began with an engaging biology lesson to understand how these birds of prey hunt to feed. Antonio explained the traps of anthropomorphism—or the attribution of human qualities onto an animal—advocating to maintain a sense of separation between us and them.

However, the falconer’s enthusiasm suggested otherwise as he released his Harris hawk named Aerial into the thicket. Antonio positioned me in front of his black glove and summoned the hawk towards us. He told me to maintain eye contact and imagine how this visual, of the hawk suddenly appearing through the brush with outreached claws, is the final sight for unfortunate prey.

I was bedazzled by the perspective and smiled as Antonio admitted how he imagines flying vicariously through his birds. Some anthropomorphism, it would appear, is undeniable.

The magnificence of Big Sur is not shrouded in the dark for that’s when the minimal light pollution provides an opportunity for expansive stargazing. I joined Tara after dinner for a stroll through the countryside in an illuminating Starbathing experience.

Although it was winter, she identified the Summer Triangle with Vega shining the brightest and answered my stream of inquiries about the timeless narratives built around the shapes in the constellations.

Tara is a Big Sur lifer and spoke to how living here forces you to embrace all the elements. See a busted water pipe? Fix it now because each property has its own water system as there’s no municipal network or governance. Or if you come upon an accident on Highway 1, stop to help because the closest ambulance might be 45 minutes away.

The spirit of connectivity isn’t a marketing ploy for the residents of Big Sur, rather, a necessity for their longevity.

Just about every eatery along Big Sur comes with a panorama but only one has the outlook seen from the terrace encircling Nepenthe. The historic restaurant (even Kerouac sang its praises in print) offers classic American grub such as their Ambrosia Burger, a ground steak sandwich served on a French roll with their notable ambrosia sauce. Add a pint of the Mai Tai IPA from Alvarado Street Brewery (from just outside the region in Monterey) to earn all the local points.

While staying at the Ventana, the dinners and breakfasts at The Sur House are delicious with a mushroom risotto entrée that hits the perfect umami notes while a scrumptious French toast initiates the day with a rich brioche bread from the Lafayette Bakery in Carmel.

Deetjen’s Big Sur Inn is often considered the oldest business still in operation and part of this success is due to the charming, dimly-lit restaurant located inside a former barn. Relics from generations past adorn the walls and the tables are neatly set with an interior designer’s touch. The menu adapts with the bounty of the day’s produce and I opted for the mouthwatering chicken dish accompanied by a bottle of red wine to wind down my evening.

I followed a local’s recommendation to Andrew Molera State Beach for a hike to the ocean. Just minutes from embarking, a rushing river overtook the trail. I hiked up my pants and with socks and shoes in hand, trekked through the cold waters towards the riparian edge. The hike was mostly flat and weaved through a meadowed landscape and I kept Antonio’s advice for spotting raptors in mind while peering over the treetops.

The path leads to a remote beach where the Big Sur River feeds into the sea. Along the beach were man-made structures formed of driftwood to offer respite from the howling winds.

Further south along the highway reveals a short hike to the McWay Falls, a waterfall that flows out of the forest onto the beach. It’s a minimal jaunt that’s ideal for anyone seeking views without the price of a hill climb or time constraints.

The abundance of nature encourages a macro perspective; however, for more introspective thinking or a chance to work on your personal development, the schedule at Esalen is updated weekly and replete with yoga and classes for mindfulness. The nonprofit is a Zen-friendly retreat center with a rich past of visitors and faculty.

I took the Saturday afternoon “Your Big Breakthrough Session” with Justin Michael Williams, who gently guided us through exercises to pursue our personal goals. He promoted a “yes-and” approach to life rather than stymieing ourselves with insecurities or doubt.

We ended with a singalong and a group of strangers began feeling strangely familiar. I headed for the door and with the Pacific by my side, ventured northbound again, but at a meandering pace.