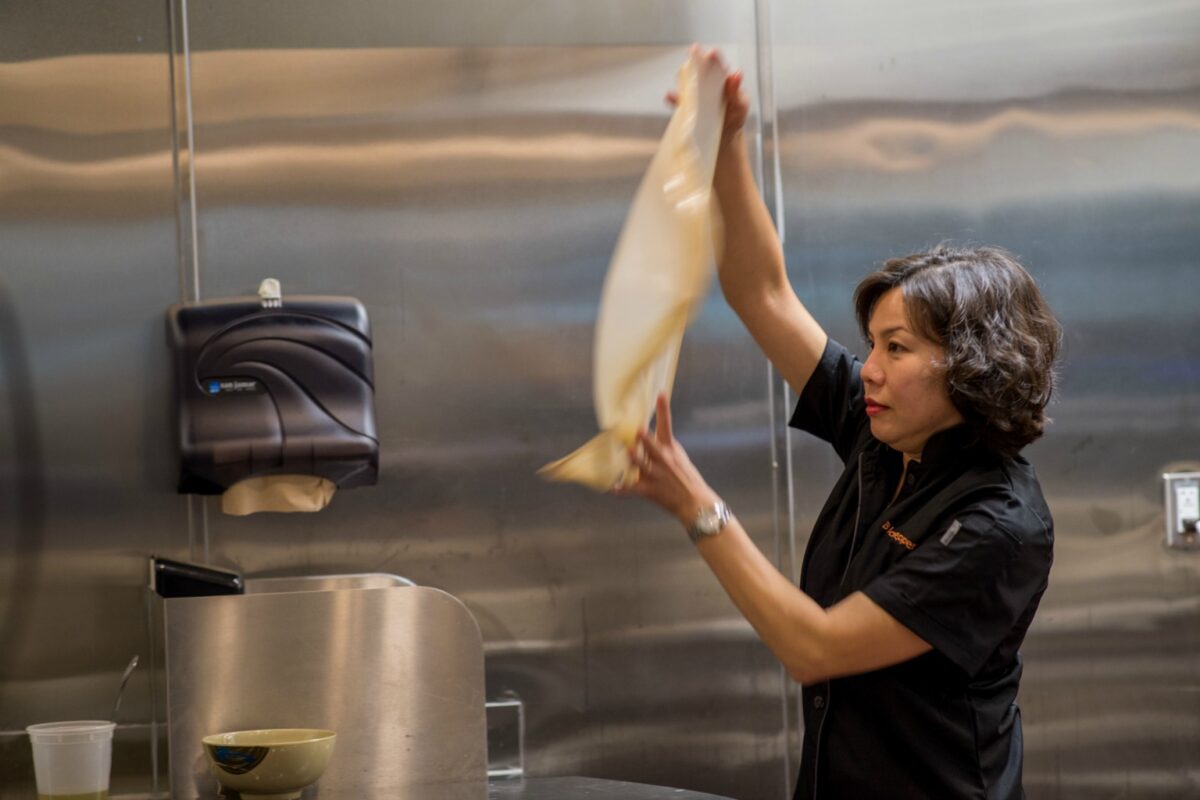 Kay Kim might have grown up in Kuala Lumpur, but it’d be hard to find someone more enthusiastic about the Peninsula. When discussing how she sources the herbs and spices for her Menlo Park restaurant, Black Pepper, she recalls how amazed she was to learn that she could grow curry leaves right in her own backyard. Although Malaysian cuisine might not be as popular as Japanese or Korean food, Kay found that the long history of Asian immigrants in the Bay Area meant that all the building blocks for the dishes she grew up with were waiting for her in her new home.

Kay immigrated with a high school friend who had family in the Bay Area and lived in the city while attending San Francisco City College and San Francisco State. Kay worked at restaurants and bars while pursuing her degrees, eventually working her way up to a job as a waitress. Her career took a turn towards business (she worked at a computer firm in Fremont for over 15 years) and her life shifted to the South Bay when she moved in with her older sister in San Jose after college. Her husband, David Yim, is an engineer by trade but also a skilled home cook, and the couple’s plan to open a restaurant has existed almost as long as their marriage. The couple celebrated their 21st anniversary this year, and their first restaurant, Banana Leaf, also turned 19 years old.

Although Banana Leaf became a staple in Milpitas, David and Kay heard frequently from customers who wished they didn’t have to drive so far south to enjoy Malaysian food. Once they found a space in Menlo Park that Kay felt echoed the feeling of their existing restaurant, they embarked on their Peninsula expansion. The couple shares the duties of head chef, but you can also often find Kay in the dining room, seating parties and chatting with customers. Even in the melting pot of the Bay Area, Malaysian restaurants are few and far between. Kay says that she often finds herself introducing the cuisine to diners. A quick look at Black Pepper’s menu illuminates why some customers assume the restaurant is some kind of generic “Asian fusion” spot. A dish like roti prata, for instance, isn’t just copied and pasted from the offerings at the nearest Indian restaurant. The roti served at Black Pepper traces its roots back to the generations of Indian immigrants in Malaysia, where the locals transformed the flatbread into something uniquely their own. That’s a constant theme in Malaysian cooking, and in the food at Black Pepper—Malaysia’s history has led it to absorb the best cuisine from its neighbors into its own food culture. A good parallel is how far Italian-American cuisine in the United States has evolved from its original European roots.

Kay talks about the Ying Yong noodles, a dish with Chinese origins, when explaining how she’s been surprised by her new Peninsula customers. She assumed they’d be put off by the thick, egg-based sauce since it’s unusual in Asian-American restaurants, but instead it’s a local hit. Generally, being a business owner on the Peninsula hasn’t presented too many new challenges for Kay and David. From their home in Saratoga, the commute to Menlo Park is even about the same length as the trip to Milpitas. They did make one big change before they moved north though—deciding to find a new name. As a seasoning, black pepper is fundamental to Malaysian cooking, and black pepper crab was always a popular dish at their existing restaurant. But the crab dish, which hails from Singapore, is also a bit messy and time-consuming to eat on a quick lunch break. So the Kims started using the signature sauce on chicken and beef, which might not be traditional but fits in perfectly with the Malaysian spirit of fusion. And after all, what’s got more staying power than something in classic black?