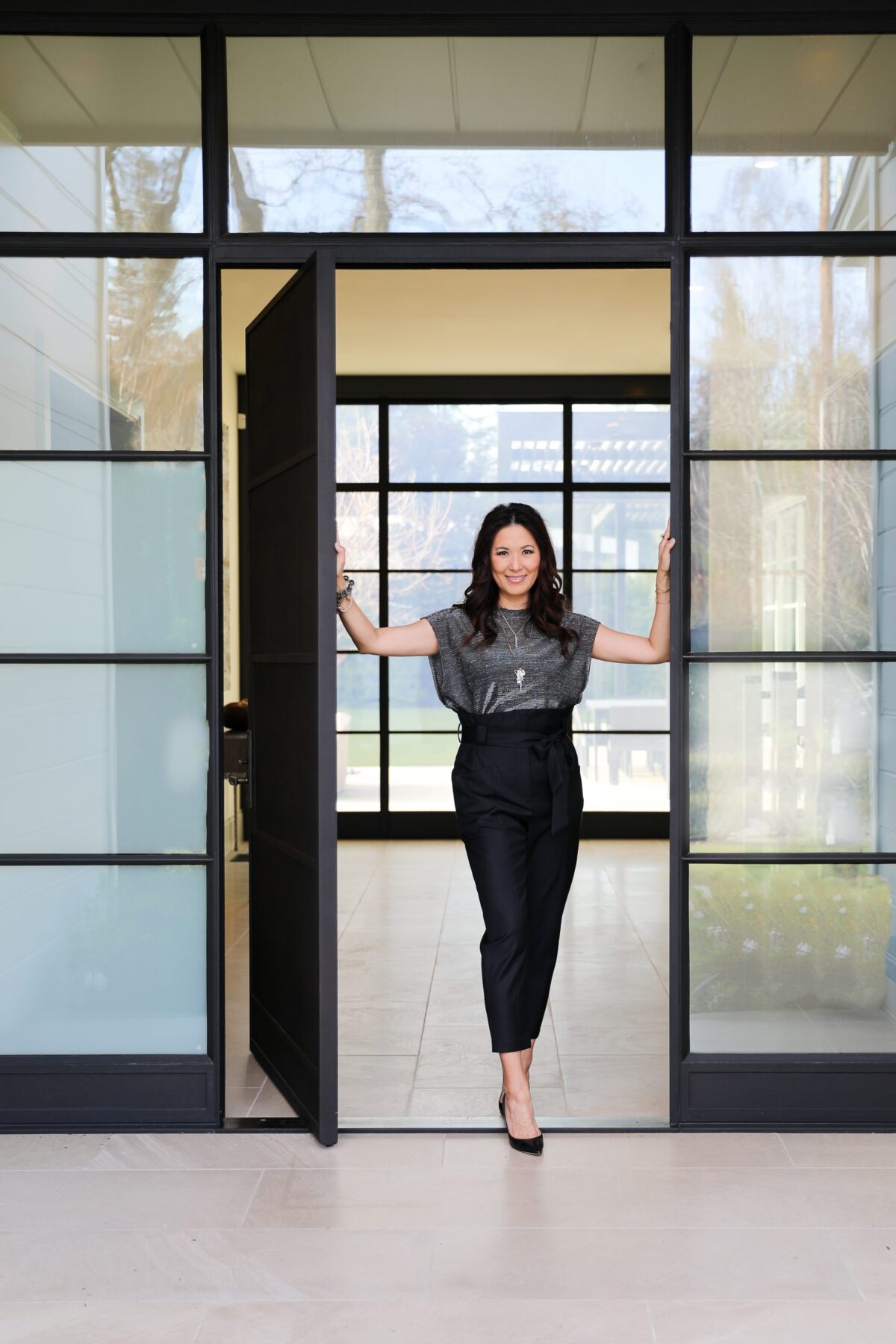 When it came time for the 18-mile bike ride, Bridget King knew she was in for a different kind of spa weekend.

The Atherton jeweler signed up for a Tahoe spa retreat through a fundraiser at Menlo School where her son attends. She joined a group of 18 moms and jetted off to Tahoe last year. The bicycles awaited them when they landed.

“Every woman on the trip was very athletic—that’s not me. But I said, ‘I’m game,’” Bridget says during a bustling Friday morning at CoffeeBar in Menlo Park.

“I was the last one on the bike ride but I made it. When I got off the bike, I was seeing double. The next day was the ropes course where you had to climb up a tree and take a leap of faith. I just climbed up there and jumped. And I don’t really drink but I did take a tequila shot and danced on the tables. We had the best time, and because it was such a special trip, we wanted to give our hostesses something to thank them.”

Being the designer and proprietress of Bridget King Jewelry, she got to work and crafted commemorative bracelets with the engraving GG 2019, as in “Girlfriends Getaway.” Recently, all 18 members of the trip reunited with bracelets on wrists.

Don’t expect to see the design appear in her collection for sale since there are some designs Bridget would never commercialize. However, the jeweler isn’t desperate for any fresh ideas, as made evident on her website, where hundreds of distinct and graceful earrings, charms, necklaces, bracelets and rings sparkle on the screen. Her jewelry is sumptuous, created with the finest detail for diamonds, while equally wearable and discreet. Bridget King Jewelry, one could say, is the convergence point between elegance and edge.

Before launching her business in 2003—initially in Hong Kong before moving to Atherton in 2013 with her husband, Ed, and two children, Audrey and Kevin—design and jewelry were natural outlets for Bridget.

She designed her first piece of jewelry, a pair of earrings, as a 19-year-old with a pair of tweezers growing up in Los Angeles and her designer eye first extended to a career in fashion as a ready-to-wear designer. Amongst friends, she’s known as the Alicia Silverstone (á la Clueless) due to her reliable approach to orchestrating a successful makeover. 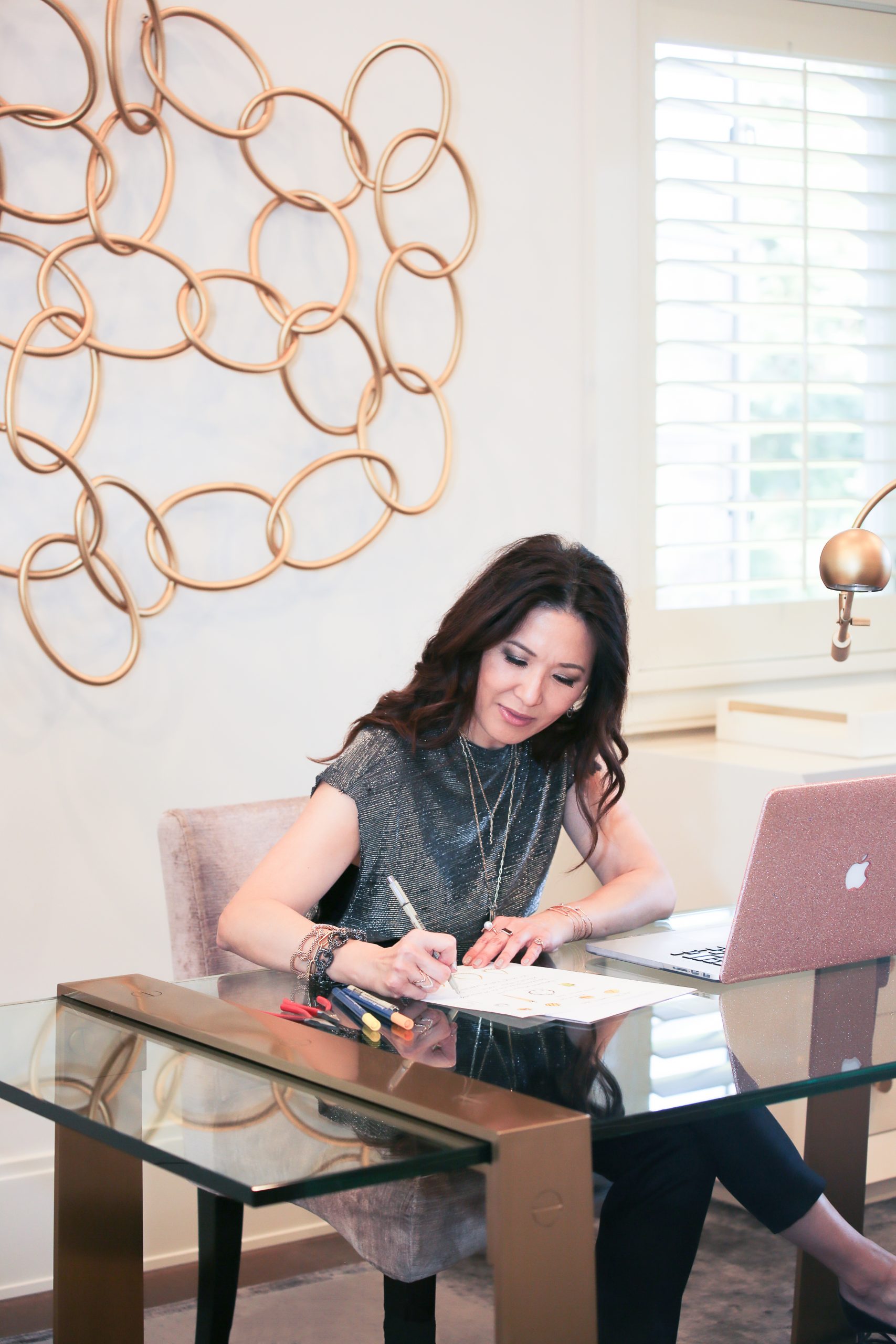 But jewelry design offers Bridget a deeper meaning that extends beyond glitz and glamour.

“Being a wife and mom, you can lose part of your identity,” she explains. “I’m Audrey’s mom or I’m Kevin’s mom; I lose my name. I felt like I needed my own thing, my own space—I needed something I can do that is purely me and my jewelry is that for me.”

Now, little reflections of Bridget’s identity flicker from the wrists, ears and necks of customers on the Peninsula who either peruse her collections online or while at Neiman Marcus in Palo Alto.

The creative process of a jeweler, much like that of any artisan, isn’t tied to a 9-to-5 schedule. Bridget works locally, which is to say that ideas for new concepts sometimes find her as she admires the artwork on the back wall of CoffeeBar.

“I get inspired by everything, but mostly geometric shapes,” she says while eyeing a photo of a glacier inside the coffee shop. “My designs are classic with an edge; I like it to have something a little different and nontraditional. And if it’s a traditional shape, I want to wear it in a nontraditional way.”

Another way in which Bridget’s collection can grow is from direct feedback from customers, such as the time a client asked if she could create a piece of jewelry inspired by dogs. Bridget is a canine lover herself (an outspoken fan of PUNCH’S Diary of a Dog column) and her family owns a Labrador named Jake and a Golden Retriever named Sally. With them in mind, she began designing a chic dog bone pendant encrusted with miniature diamonds.

Not long after the charm was released, Bridget’s sister-in-law Tina called her one night to tell her to turn on Entertainment Tonight.

On screen was Ayesha Curry donning Bridget’s diamond dog bone pendant. The celebrity endorsement was an exciting validation for her craft but Bridget had to laugh at herself when her penchant for perfectionism had her noticing that the charm necklace was ever-so-slightly out of sequence. 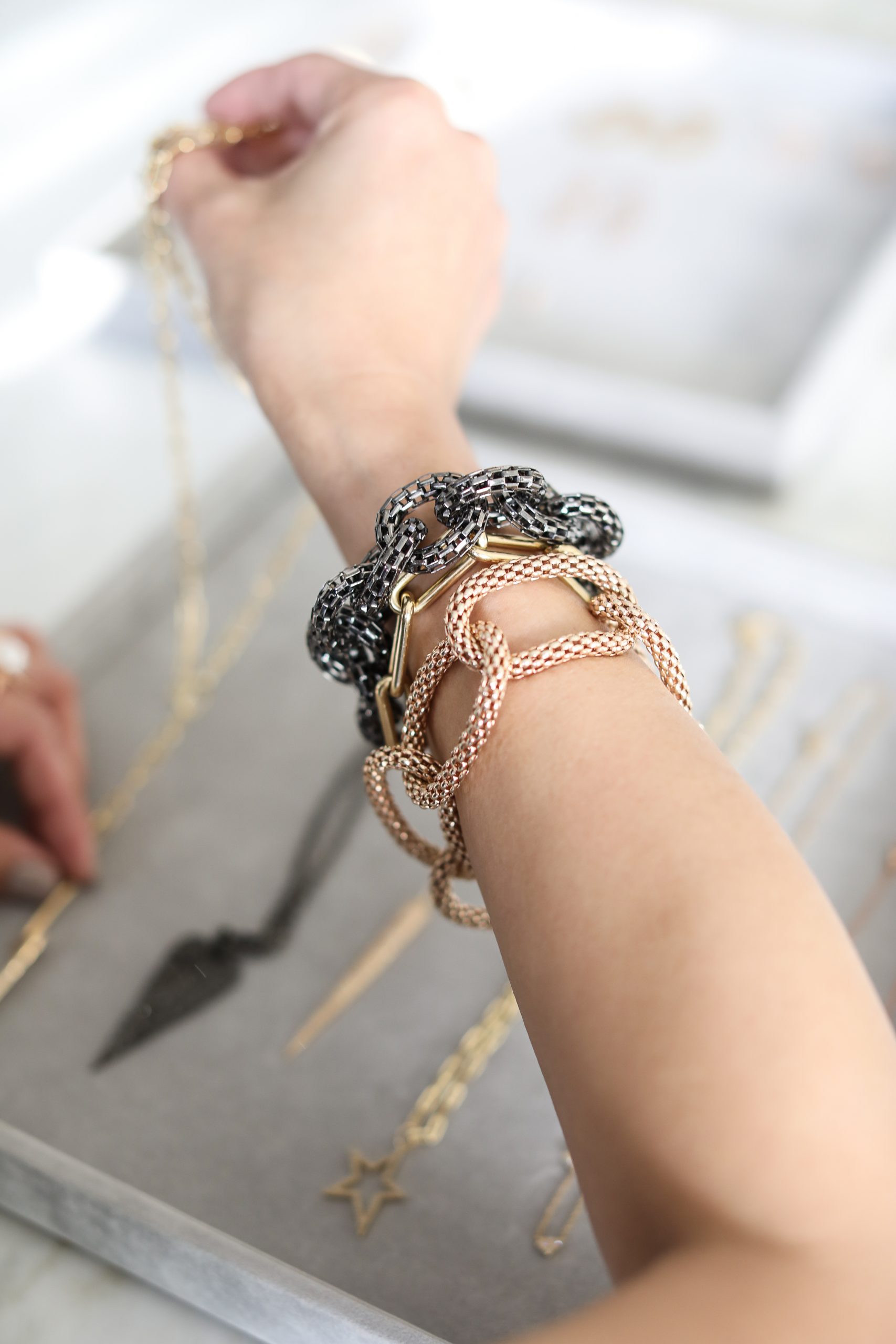 An element of Bridget’s success lies in her ability to create without rules since she’s self-taught and did not undergo a traditional path such as attending the Gemological Institute of America (GIA). Her mother, however, attended GIA and Bridget recalls with painstaking detail how mother and daughter would carpool together, battling Los Angeles traffic, so her mom could take classes at GIA in Santa Monica while Bridget attended UCLA.

In college, Bridget studied design and learned an array of mediums from photography to graphics to designing cards. She loves stationery to this day, citing her father as inspiration, and instilled the importance of handwritten thank you cards to her two kids.

Bridget works with a group of gemologists she met in Hong Kong whom she can trust to execute her vision. Currently in her office are stacks of designs awaiting production such as her 24/7 collection, which is ongoing and crafted to feel like your favorite pair of jeans. (“I lived through the 1980s,” she says. “No heavy jewelry!”) She says that she prefers to spend more on a manufacturer to receive better quality (with a price point that is higher) rather than have it cheaply made to sell higher quantities.

It’s all part of her pursuit for the perfect sparkle to complete an outfit or inspire a stronger sense of confidence for her customers. Whereas large diamond retailers might grab ears through radio commercials or flashy storefronts, Bridget continues to woo clients simply by asking questions about the person’s preferences to whittle down possibilities for the ultimate bijouterie. In more ways than one, the Peninsula has a friend in the diamond business

“Who do you think of when you hear De Beers? Or what face comes to mind when you think of Tiffany? People want a story,” Bridget opines.

“And for me, there’s a story for everything. There has to be an origin.”