Why do you react “eek” to a spider and “ahh” to a flower? What do you feel when you see a ripple in the water? Why do shapes evoke such an instinctive response? And how do you channel that “emotive language of form” into art?

These are questions Yoko Kubrick ponders every day. “I’m so intrigued by the part of our brain that connects with nature,” she says. “It connects to something deep in you, deeper beyond words, beyond thought.”

On a wooden workbench positioned outside her Woodside home, Yoko expertly wields an Italian air hammer, chiseling away small chunks from a block of Colorado alabaster. Against a backdrop of vibrant bougainvillea, her creative spirit seems to channel the intense vibration of the pneumatic tool, as she permanently imprints her vision into stone. “I’ve tried painting and drawing but I get restless sitting still for so long,” Yoko notes, as she shakes out her hands, which will be numb by the end of a day’s work. “I love the physicality of sculpting; it feels like more of me is going into it.”

Yoko’s quest to discover her own unique form of artistic expression has clearly molded her personal journey. Born on the island of Guam to a Czech father and a Japanese mother, she felt an early connection with sculpture as her childhood transported her between California, Hawaii and the Czech Republic. Through encounters with menacing Tiki figures on Hawaii’s Big Island and terrifying gargoyles at Prague’s St. Vitus Cathedral, she gained a fascination for the history of sculpture in human culture. “In the old part of town in Prague, every building actually has a sculpture above it,” she points out. “Sculpture plays such an important part in life.”

After living in San Francisco, Yoko’s formative years brought her to the Peninsula, and she graduated from San Mateo High School. While acknowledging her love of art, her father encouraged her to pursue a more practical field, suggesting that she could still maintain a studio practice on the side. Fascinated by human psychology, Yoko merged her interests with a degree in art therapy, which led to working with kids on the Peninsula and in the East Bay. “One of the reasons art therapy is so successful is that image comes out of our right brain, which is the direct route to your unconscious and subconscious,” she explains. “When we talk, when we speak and form sentences, that comes out of our left brain, the rational side of the brain.” 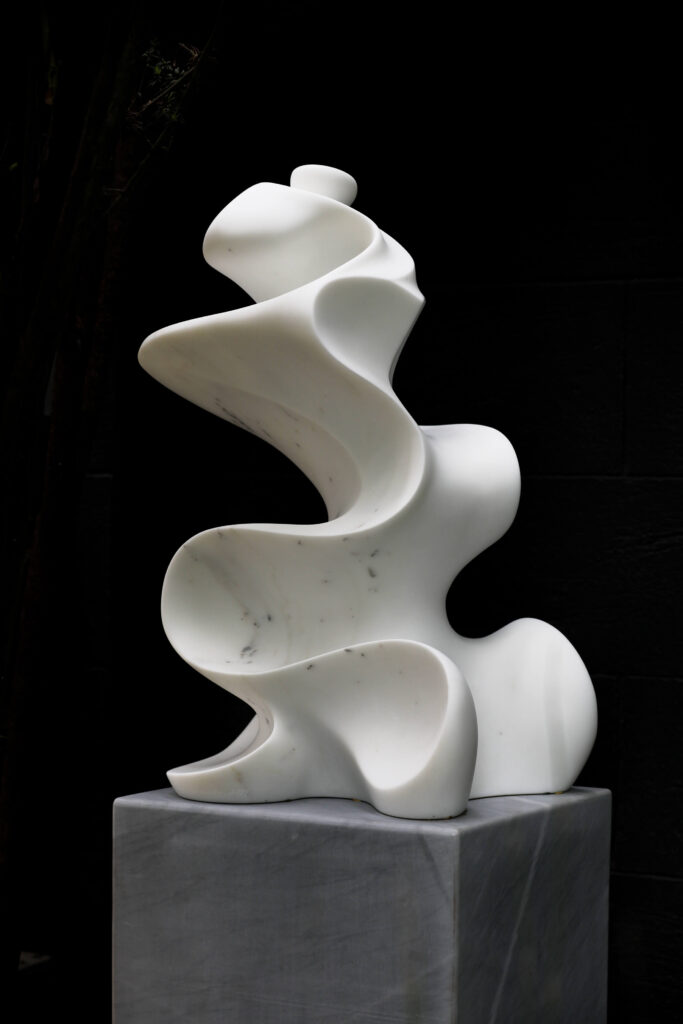 Throughout her career in art therapy, Yoko continued to expand her knowledge and expertise—whether it was working as a studio assistant for acclaimed sculptor Albert Guibara or studying mold-making at The Crucible in Emeryville, stone carving at Palo Alto’s Pacific Art League and photography through Stanford Continuing Studies. When challenging circumstances prompted soul searching for what comes next, she began exploring the question, “What would you attempt if you knew you couldn’t fail?”

Ever passionate about sculpture, Yoko consumed biographies: Barbara Hepworth, Isamu Noguchi, Constantin Brâncuși. “I would think, ‘Oh, look at this! How did they make this?’ And the same town kept coming up—the town of Pietrasanta in Italy,” she recalls. Later, while watching a documentary about painter Caio Fonseca, the dots connected again. She listened as Fonseca talked about drawing inspiration from the Tuscan village of… Pietrasanta: “I thought, ‘This is a sign!’ I have to go to Italy. I felt so strongly that I needed to go there.”

And it was in Italy that Yoko began to fully discover her artistic voice. “I knew I wanted to do abstract because I was so drawn to abstract work,” she says. “For me, it’s the gap between reality and fantasy; it’s that space that allows for the imagination.” With thoughts already whirling about the natural world (“Why do flowers trigger such feelings of pleasure in us?”), Yoko experienced an epiphany while visiting the Borghese Gallery in Rome. After marvelling at Bernini’s Daphne and Apollo, it all coalesced—nature, mythology and the idea of exploring the psychology of aesthetics, what she refers to as the “emotive language of form.”

The Capture of Persephone. Oceanus. Callisto. Vesta. Artemis. These are just some of the gods and myths that Yoko liberates from blocks of Carrara and Calacatta marble. Khloris, the goddess of flowers, emerges as the abstraction of a flower bud, with flowing curves and a strong stem denoting femininity and strength. Marking the continuous progression of time, Kronos appears as three circular forms merging into each other, an abstract figure sitting on the past and diving forward to consume the future.

After studying at the Accademia di Belle Arti di Carrara, Yoko transitioned into a back-and-forth routine—working from her Pietrasanta studio and then returning to her home studio in Woodside. She also aligned with a professional studio in Pietrasanta, where she taps into Italy’s rich sculpture heritage. “They really sit down with the artist and help them figure out how to execute their projects,” she says, citing her appreciation for the local artigiani. “They have a vast array of large tools and machines that work on a compressor; they have giant saws and drills and things that mill. There’s no way I can do all of that here.”

The fact that Yoko is currently working with softer, easier-to-carve alabaster in Woodside—rather than Carrara marble in Pietrasanta—is a sign of the shifting times. With the current travel restrictions, Yoko set her mind to reframing the situation, viewing it as an opportunity rather than a setback. “I could bring stone here,” she realized, and blocks of Colorado and Spanish alabaster now line her driveway, waiting to be transformed under the artist’s eye. “It’s my first time working in alabaster,” she reveals, as she presses her iPhone’s flashlight against a Spanish slab to demonstrate its qualities. “It’s so translucent, the light will pass through it.”

2019 brought a flurry of career highlights, including the installation of a commissioned public work, Tides, at San Francisco State University, the creation of six sculptures for the San Francisco Decorator Showcase, coverage by Architectural Digest and even a profile in The New York Times Magazine. Yoko describes it as “a cross of luck, drive, wish and serendipity” and was anticipating another momentous year ahead. With exhibits and travel plans now sidelined, she is exploring new themes and projects, while preparing to showcase Nymphaeum/Shell Abstraction at September’s Silicon Valley Sculpture 2020 art fair at Menlo College. And while Yoko is eager to return to Pietrasanta, she also recognizes the complementary blend of her two chosen geographies.

“Italy is grounded in tradition, with its exquisite heritage dedicated to crafts and to beauty,” she reflects, eyeing the next chisel position on the block of alabaster. “All of Silicon Valley is art. Art is breaking out of the old and coming up with a new idea—we have permission to make our dreams come true here.”