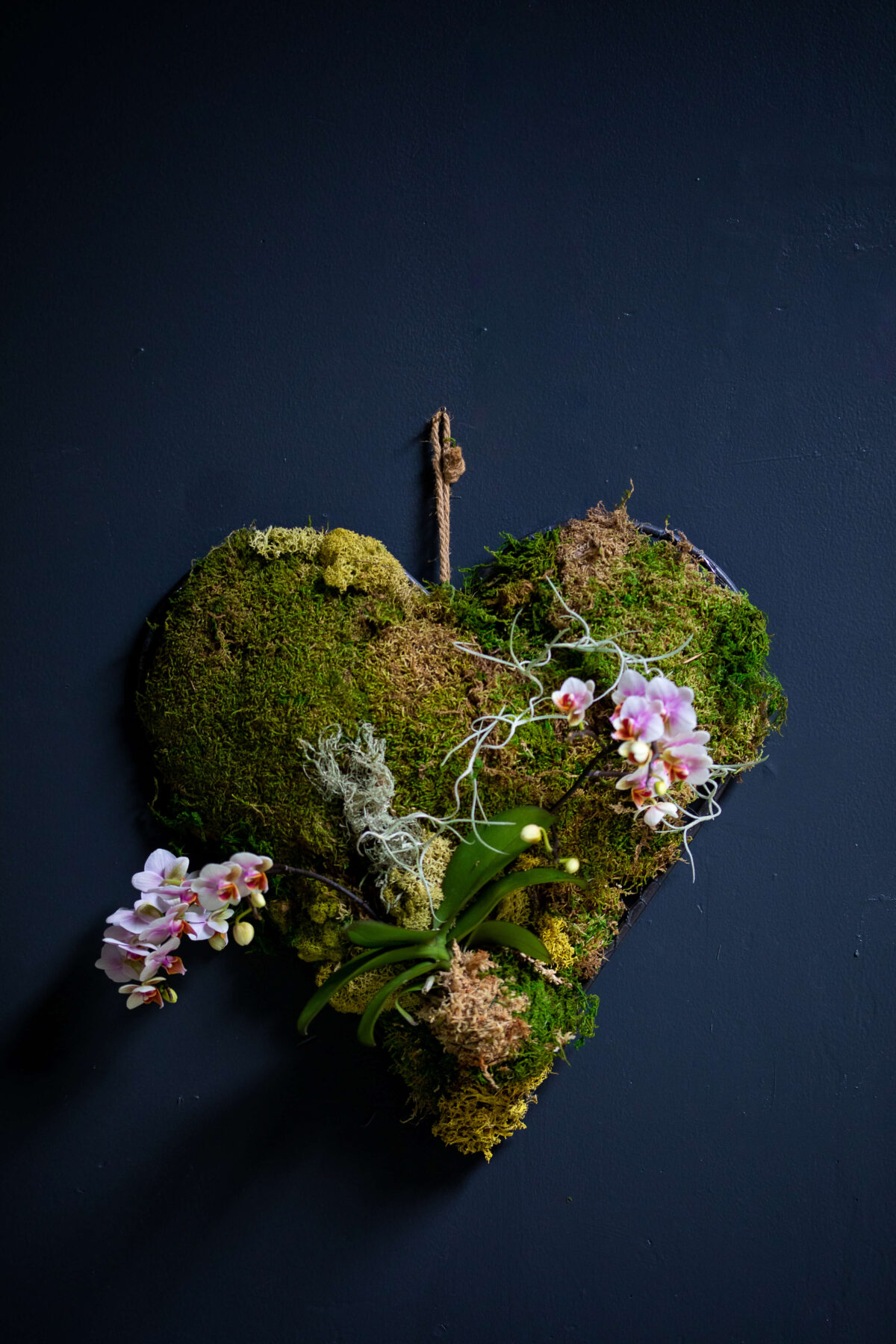 Entering Penflora in San Mateo feels like walking into a secret garden tucked in the midst of industrial buildings. A large archway crafted from tree branches, moss and live greenery frames the front entrance where owner Melissa Olson and her dogs greet you. As you wander through the expansive floral arts studio, you can see how Melissa has let her imagination run free—and how she embraces her own mission of “Accessorizing Your Life Through Plants.”

“Flowers and plants are the soul of a home,” she notes. “Nature is therapeutic and people have had a bit of an awakening to the impact plants can have on their lives.” 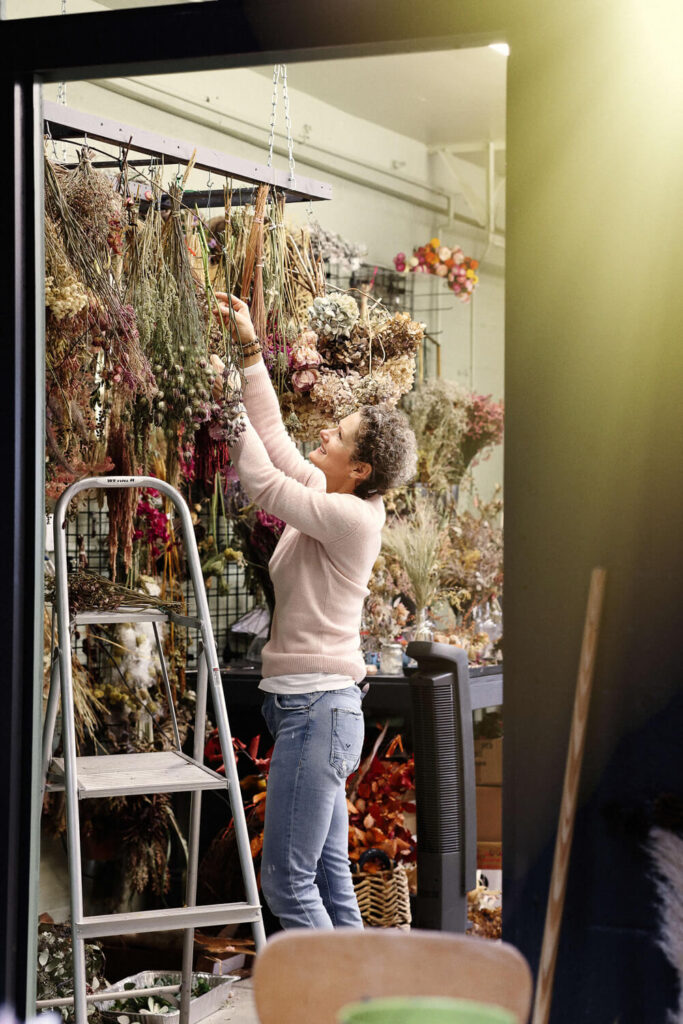 Dozens of intricate wreaths and arrangements share space with a florist refrigerator, an orchidarium and plants growing under lights. In Melissa’s office, an artful ceiling fixture made from dried flowers and natural materials showcases her whimsical style. “I am a forager,” she smiles. “My favorite time to collect things is after a storm. My friends laugh when they see me walking down the street collecting.”

For Melissa, it’s an ingrained pursuit—she traces her foliage-strewn path back to her childhood. “I grew up with plants everywhere and my parents had really beautiful gardens,” she remembers. “My mother was always doing arrangements on the fly.”

Melissa also acquired skills through Filoli’s landscape course “Through the Year in the Garden,” where she learned about soil and pruning. She went on to work with homeowners needing a garden refresh and new landscape. Melissa credits her background in landscape consulting with informing her design sensibility when it comes to floral creations.

Part florist studio, part workshop and garden boutique, Penflora offers a fresh take on floral design for Peninsula plant lovers. In the workshop section of Penflora’s many vignettes, Melissa points out a long wooden box. “We melted wax on it to give the feeling of ice and snow,” she relays. The box became a centerpiece for a Hillsborough Garden Club event, an organization in which she is a vital member. “People often bring me their own containers and I fill them with plants and flowers or a combination of both,” she says. “I love that, because the containers express the person’s personality so you can see what they want.”

After studying business at the University of San Diego, Melissa pursued a career in finance at Montgomery Securities in San Francisco. Originally from Sacramento, she and her husband Erik moved to Burlingame and then Hillsborough to raise their family of four boys.

“When I was pregnant with my first child, I ended up staying home and that’s when my creative world opened,” she recalls. Melissa eventually took over the garage and finally Erik suggested it was time to find a new spot. “I did a total makeover on this space, and I continue to tweak things,” she says of her San Mateo studio. “I’ll never be able to move out.” Her family has been very supportive of her business and her sons pitched in to help during the redesign of the space. 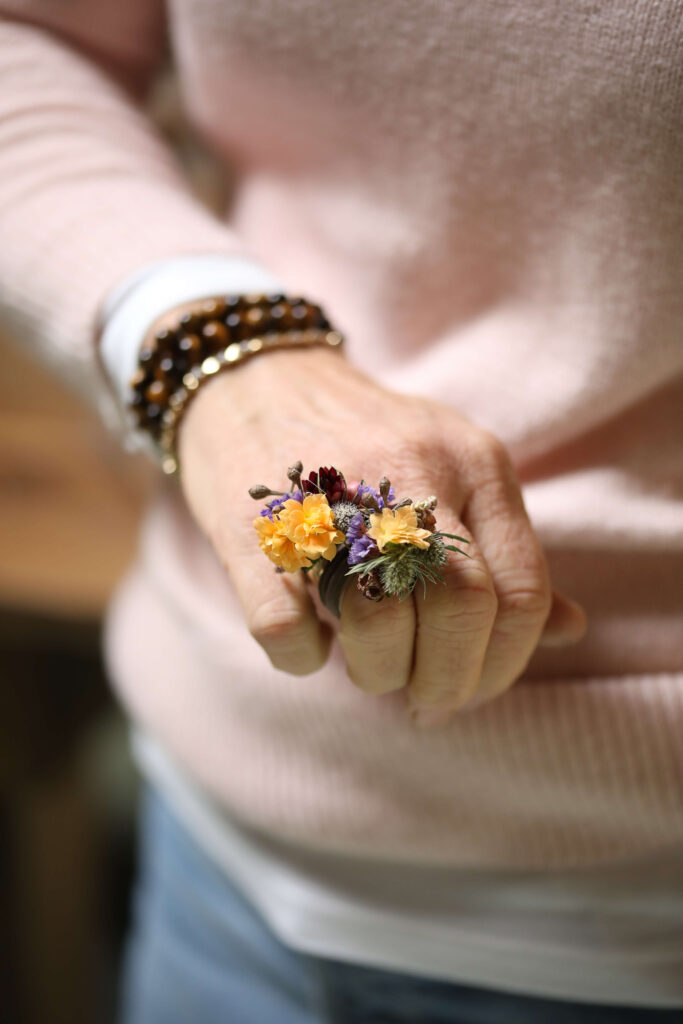 Melissa’s work ranges from containers to large-scale floral installations. “I love building stuff,” she summarizes, before describing a project. “I am going to build an arch over the window for the baker across the street—a branch is going to attach to metal work and it will change with the seasons.” Melissa acknowledges that working with living things does require extra attention to detail: “When I find logs and bits and pieces, I cook them at a low temperature to get the bugs out.”

Melissa’s love for plants runs deep. She believes that everyone has an innate tendency to seek a connection with nature and that living things bring energy and personality into a home. “From a health perspective, plants bring air purification, increased humidity and focus to your work,” she adds. “They also have a calming effect.” Melissa also keeps sustainability in the forefront at Penflora with composting and repurposing materials in nearly every aspect of the business. “I have a bent for things that last,” she says.

Throughout the year, Penflora offers classes ranging from wreath making to wearable floral necklaces made from natural materials and plants. “The first class I offered was succulent pumpkins and it was sold out in two minutes,” she says. “I work with things that are in season for each workshop. I think everyone is creative but they don’t have the time to explore it. Every person walks out with an amazing project and a lot of pride.” 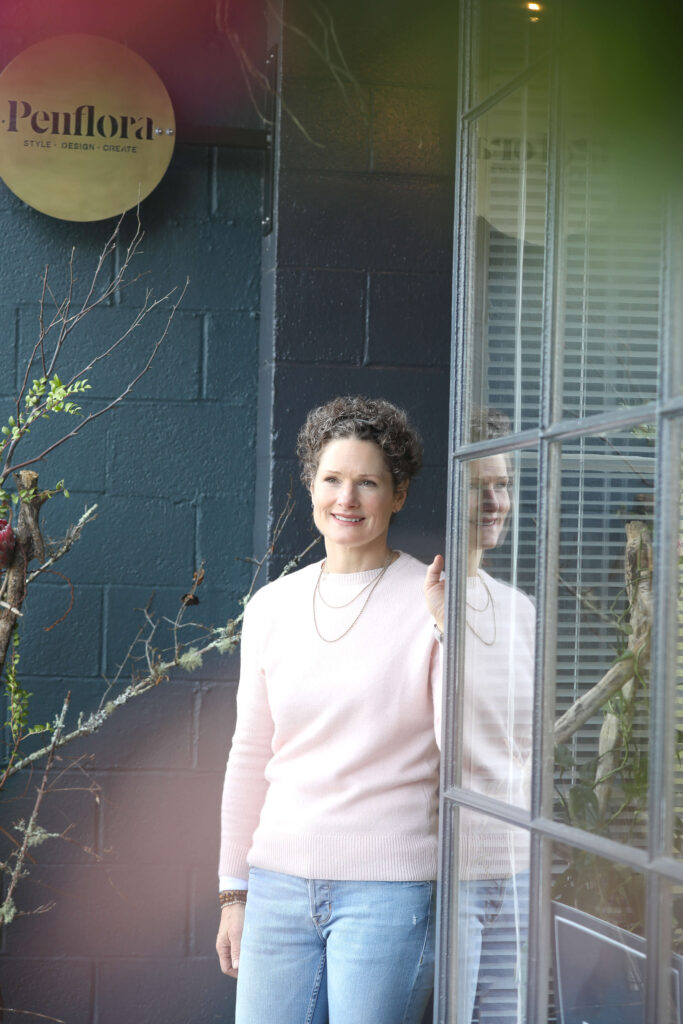 Since opening its doors in September, Penflora has experienced some growing pains of a new business. “I don’t have foot traffic, so that is challenging,” Melissa reveals. “Also, I am a one-man show.” On the other hand, she has a strong network with neighboring businesses and has already collaborated on a few projects. “I like to bring beauty and I love bringing the community together,” she says. Melissa also supports other local artisans and sells their products such as honey from a local beekeeper, beeswax candles and bracelets.

Not held back by the traditional constraints of floral arranging, Melissa’s style reflects a new way to incorporate natural materials and plants in everyday life. “I see plants as art,” she emphasizes. “Plants can replace a statue or a decorative object. They make a house feel lived in.”