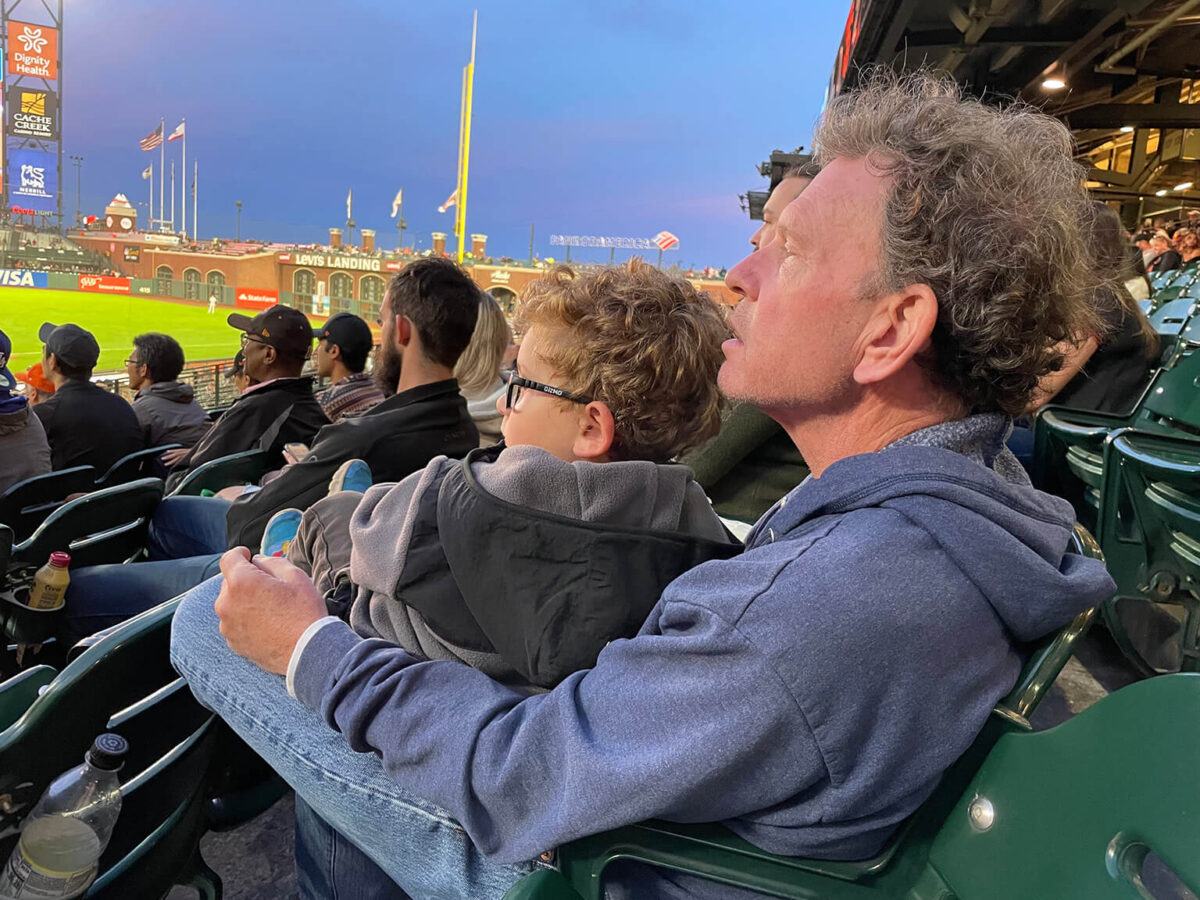 We have this down now, going to see a ball game at Oracle Park. We try to go on specific nights at specific times, with no interest whatsoever in the opposing team. In fact, the worse the team the Giants are playing, the better for us: lower ticket prices, easier parking and fewer fans.

We go only a few times each year, not so much because we care about the Giants these days (or their rather annoying manager Gabe Kaplan) but for the experience. It’s not so different from playing golf, where you can spend quality time with someone you care about. I used to take each of the kids, but now with moves from the area, childcare wrangling and various conflicts, my consistent seatmates are my oldest son Josh and his son Evan Joseph. (I have to write the Joseph part since he was named after my mother, Josephine.)

Evan is about to turn four—and so how and when we go to the games is designed with him in mind.

The games start at 6:45PM and we leave Josh’s home in San Mateo at five o’clock sharp. With little traffic and no lines to get into the parking lot, we walk toward the stadium by 5:30. Dressed warmly, Evan loves it when we do “1-2-3 swing,” flinging him up into the air.

The first challenge is climbing the three large flights of stairs right inside the stadium, but we do it slowly and Evan is always proud of his accomplishment. We intentionally arrive a good hour-plus prior to the game’s start since the game is the least important part of this adventure. Though our seats are behind home base, we head off to the right and along the top of the outfield.

Our first stop is the old trolley car in right field. Evan is a train fanatic and though this is not a train, it’s close enough. We jump on board, climbing through it, examining new things each time. We wander over to the area where you can see the marina below and spend a good amount of time admiring the hundreds of vessels tied up and the inevitable three or four boats out on the water.

Our slow walk takes us to the large slide underneath the giant baseball glove in left field. I always encourage Evan to go down the slide, but he, the very cautious one, will have nothing to do with it. After staring down the hole at the top of the slide, with no end in sight, I can hardly blame him.

We then slowly make our way through the corridor behind the seats, smelling the aroma of freshly-made popcorn and hamburgers. To his credit, Evan doesn’t pester us for anything, content to watch all that is around him.

By around 6:30 we are in our seats looking out at the final preparations for the game. They announce the line-ups, discuss the starting pitchers, hold some on-field ceremonies which, unfortunately, no one watches, and then we stand for the national anthem.

Josh, always an early eater, then takes leave of Evan and me and heads out on a food run. Most nights it’s pizza or Mexican food and a $10 Coke. Though we have tried, we cannot find a carton of milk anywhere in the stadium. Evan is a good eater and finally takes enough “big” bites to guarantee him dessert: ice cream. Meanwhile, Evan searches the field for the Giants’ mascot, Lou Seal, but he is nowhere to be found.

The three of us sit there in the cool air of the stadium, feeling connected, embraced, calm. I appreciate the time with my son and my oldest grandchild. I try my best to take a moment to be grateful, and I know how lucky I am.

After the Giants’ first at bat, I head off to find my own dinner (usually with a side of fries to share with Evan and Josh). At some point, I buy cotton candy from one of the vendors to take home to my daughter Tali, who loves the sugary treat. Evan always gets a special bite of this.

After we’ve watched the game for a bit over an hour (usually we make it through the third inning), it’s time to get going, since it’s already past Evan’s bedtime. As we are among the first to leave, they must open a special door for us and remind us that we cannot re-enter. As we make our way to the car, we pass fans just arriving to the game.

It is always a great night when I’m able to share it with those I love in a setting that is at once new and also terribly nostalgic. Once on the highway, we hear the gentle snores of Evan in his car seat as we drive home, and it reminds me of the joy I had taking my own kids to games when they were small. And now it is especially poignant to be able to share this sweetness with the next generation.