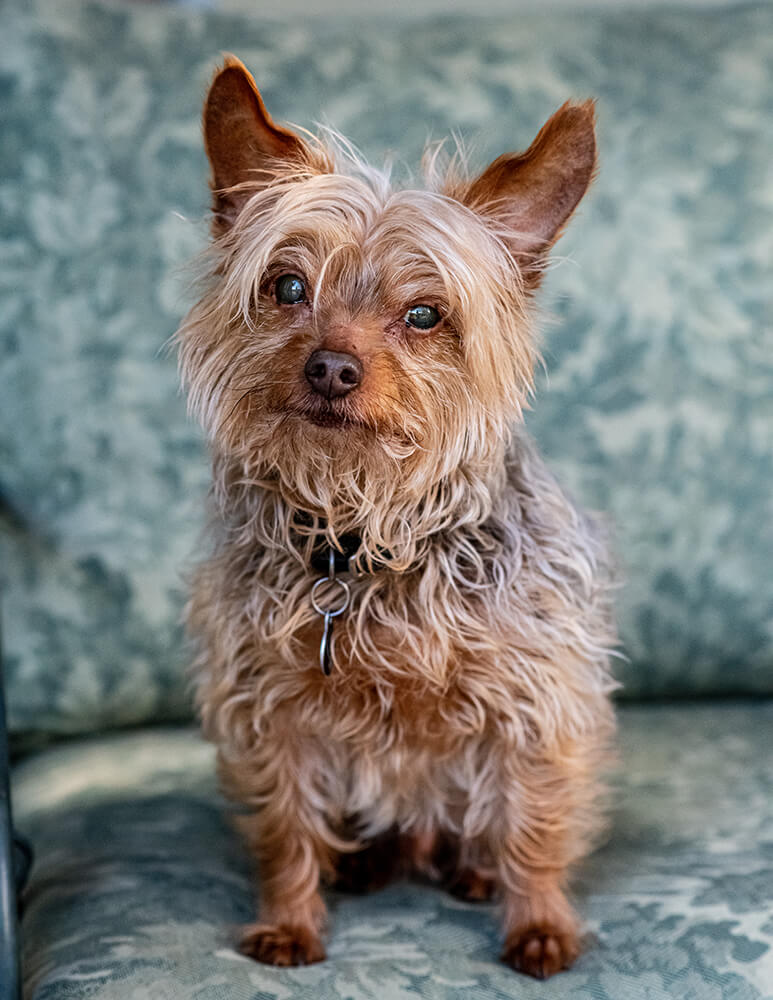 It was early December, the start to the holiday season, when I gathered up Arielle and Talia, both young teenagers, and we headed out for an unknown-to-us East Bay location. After they had seen a colleague’s adorable Yorkshire Terrier puppy, and finding my sweet daughters too difficult to resist, I promised to take them to look—and look only—at the litter. Foolish, naïve me!

As they played with five squirming balls of energy, my daughters’ smiles and happiness were not missed by me. One puppy stood out, not for his brilliant coat or his outgoing personality, but, really, the lack of both. He seemed shy and in need of love and support, and that was the puppy to which my daughters were drawn.

Inevitably, they begged me to bring him home with us. It was near Hanukkah and I, perhaps the softest dad ever, gave in to the joy and exuberance of my loving girls. And just like that, Chase was ours.

The sweet puppy quickly mastered the ins and outs of living in our home of six, and we shared many happy years with Chase being a part of the family, though the kids were slowly making their ways out the door.

When my oldest child, Josh, returned from college and moved to a small Palo Alto home, he asked if Chase could live with him. I went over to Josh’s home every morning and picked up Chase so that he could spend the day at my office. This went on for a few years until Josh became engaged and moved on with his life. And at this point, so had the rest of the kids, and Chase, then, was truly mine.

This small dog did not have a sparkling personality—never wagged his tail, never tried to lick my face, never seemed much excited about anything. And yet, the moment I entered our home he came running to me and would not leave my side until I had left the premises. They say that dogs often resemble their owners, and I guess that was true with us—introverted, calm, but loving and devoted.

Chase could rely on me for a morning chew stick and some of our leftovers from dinner. Before bedtime, we would walk out into our front yard and while he was relieving himself, I would look at the moon and stars and try to say a word of gratitude. We had our many rituals and he never tired of reminding me of them. I came to rely on Chase for his devotion and companionship, and I truly loved the little guy.

A couple of years ago, when he was 15, Chase started slowing down, unable to jump on the couch, having difficulty going up and down the stairs and so on. It became clear that his eyesight and hearing were failing. And yet, he was mostly his usual self. Because he meant so much to me, I worked to accommodate his aging, hoping to keep him in my life as long as possible.

But his health continued to deteriorate, and then came the issue of his incontinence. Family and friends told me it was time, that he was almost 17 and had had a good life. And yet, I just couldn’t do it. Six months passed.

Emotionally, I was conflicted between competing subtleties: the kind, gentle premise “of putting him to sleep” and the guilty dread that we would be “killing” him. I struggled and resisted, unable to imagine life without Chase by my side, without him welcoming me as I walked through the front door. I also realized—with resigned sadness—that losing Chase would sever the last connection with my children’s childhoods. What finally made me decide to move forward was that I didn’t want the fragile little guy to have a terrible fall down the stairs.

So, while he was still the little love of my life, I made the call to a vet who would come to our home and take care of things. I planned it so that I would have three days to pamper him and say goodbye. The kids all came over or used FaceTime to say their farewells.

His last 24 hours were surreal. Each of his usual routines became his last and I gave him so much of his favorite foods that I was afraid he couldn’t keep it down. As the hours ticked toward his appointment, I thought about canceling it a dozen times. I sat with him, thanking him for all he had given to our family, unable to hold back the tears of my appreciation and the upcoming loss of my buddy.

The vet arrived and was incredibly gentle and kind, as though this was the first time she had ever done this. My sweet daughter Talia—there from the beginning to the end—came over with her newborn, Noah. We went outside and in a familiar chair, I held Chase, stroking his hair and comforting him. The vet gave him a sedative and Chase put his small head between his paws on my leg, giving me a last moment to tell him that I loved him.

Chase almost made it to another holiday season, and it will be lonelier without him. Loss reminds us to relish the time we have with the people and pets that bring us happiness, and to love and cherish what gives us joy, especially during this season of light. Happy Hanukkah and Christmas.