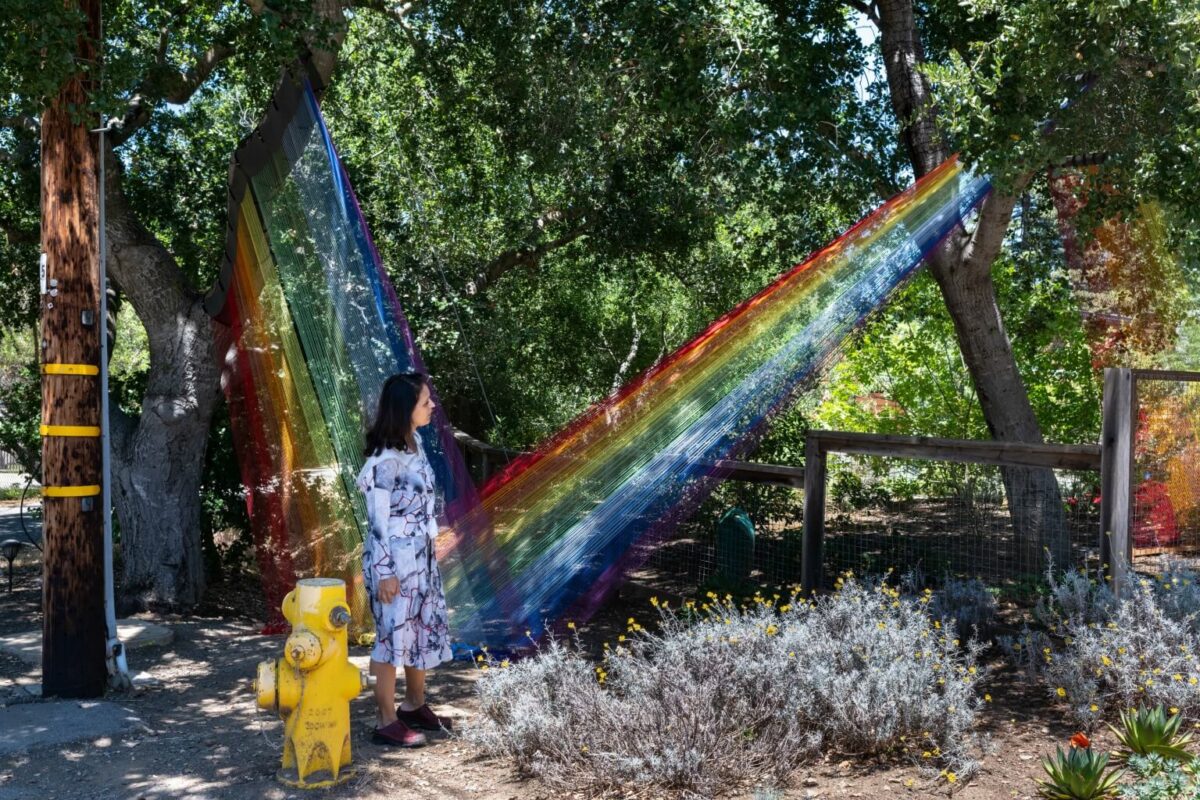 If you’re lucky enough to wander by Los Altos-based artist Sudnya Shroff’s home studio, there’s no need to wonder if there’s a creative spirit inside. Outside the gate, her 3D sculpture takes the form of crocheted flowers alongside a shooting rainbow of thread winding up, down and around her curbside trees. As Sudnya recalls, “My son asked me if it’s supposed to celebrate Pride, and though that was not the original intention, I quickly said, ‘Yes! Yes, it is!’”

It’s this very Bay Area attitude—combined with an abundance of talent—that attracted the attention of Saratoga’s Montalvo Art Center, where Sudnya prepared a similar but towering installation on display now in their gardens. There, her sculpture A Common Thread invites visitors to show support for the global refugee community by adding to the hundreds of crocheted flowers on display in the piece.

Although simple in pattern, the flowers convey a complexity of emotion and meaning, as they are crafted by women from 17 countries housed at a refugee center in Greece. According to Sudnya, the flowers symbolize “the tenacity of the refugee-activist collective resisting the darkness of fear while embracing the beauty of hope.” Inspiring hope is what motivates Sudnya to travel to Greece for a month every summer, where she personally teaches refugees the skills needed to craft the small blooms. She provides the supplies and then pays the women two Euros per piece.

Here’s how she captures her intent: “In providing skeins of multicolored yarn and needles to my talented multifaceted refugee sisters—who otherwise spend their time counting long, tortuous days inside flimsy crowded tents at the mercy of inclement weather and fellow humans in power—my hope is to help them create space where they have none, in their minds, crocheting their meditative states into beautiful flowers as they not just cope with their trying situation but also reclaim their intrinsic power.”

And if Sudnya’s social activist sculptures aren’t inspiring enough, she is also a passionate mother, wife, author, textile designer and philanthropist who came into these roles by first becoming… an electrical engineer? “I have been five different people in my life already,” she says. “I love that.”

A little background: Sudnya was born in Pune, India, to a Gujarati family. She followed her childhood sweetheart Nick to the U.S. so each could pursue advanced degrees. “I met my boyfriend, now husband, at the age of 14. He had a plan and he wanted to do engineering and I kind of just tagged along,” she says. “I would have gone to art school had I not met him, but he really had a plan of making it on his own and I knew my art degree would not really help. I was being practical, and I really enjoyed math and science, so I thought, ‘Okay, I’ll do it.’” 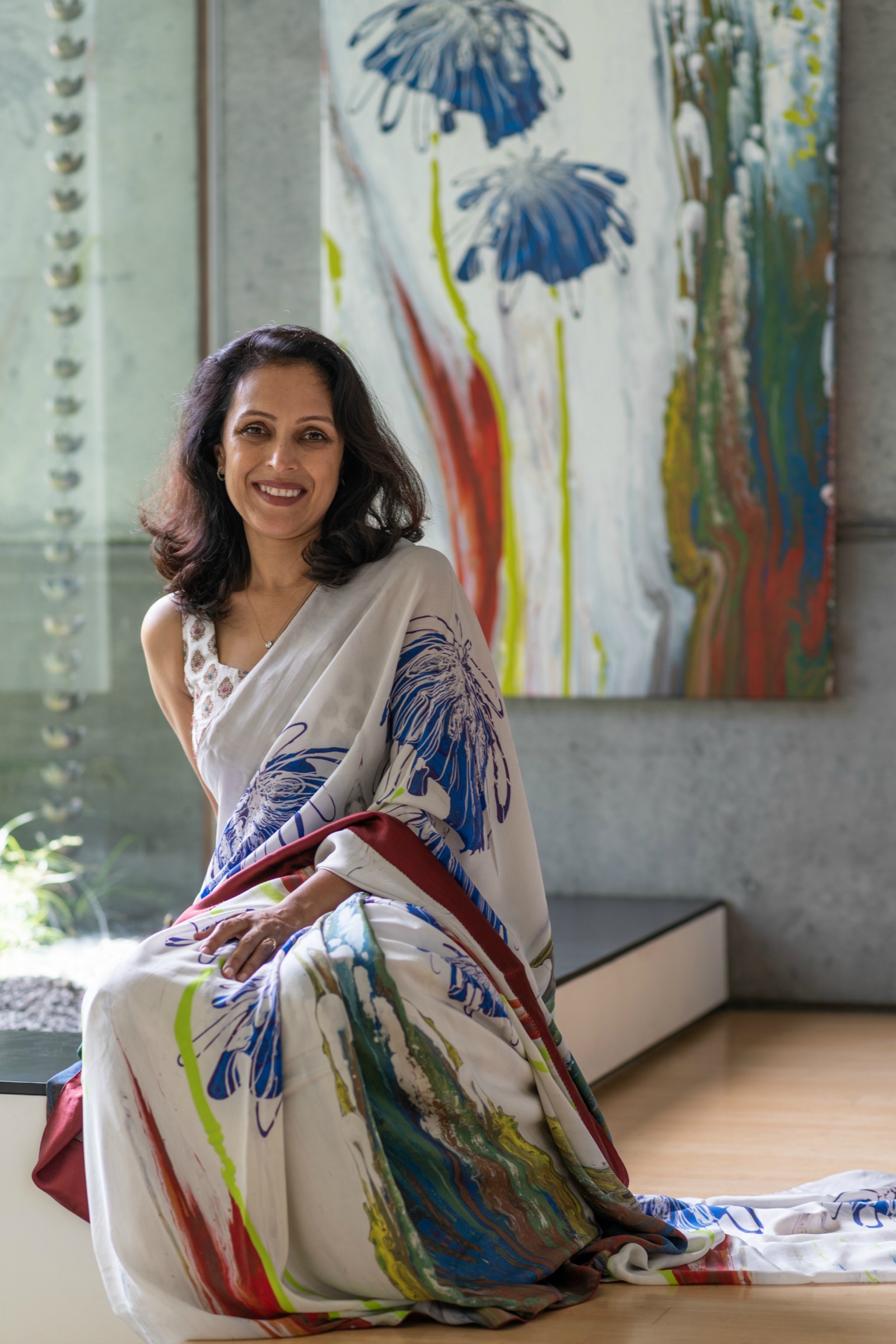 Still, she’d been painting since childhood, and when Sudnya arrived at Iowa State University, the most exciting part for her about America was the art section in the bookstore. “It’s different now, but in India back then, art supplies used to be ridiculously expensive or just not available. So when I came here and they had paper in all these different thicknesses and so many different brushes and pens, I was in heaven,” she recalls. By living frugally, Sudnya was able to nourish her artistic side. “I still have some of the works that I did. It was my way of meditating. I just knew that I felt calm when I did it and it was just instinctive.”

When graduate school ended, Sudnya headed west to take a job at Intel and be near Nick. “Hardware design brought me to Silicon Valley. I was on the first 64-bit microprocessor architecture called titanium and I was there from ’97 to 2000.” Then Intel sponsored her second masters degree in engineering management at Stanford. “That’s when I took all the possible classes in art and in creative writing, everything other than engineering, because I’d already finished my masters and a thesis in electrical engineering,” Sudnya says. “What I was doing at Stanford was the management aspect of it. It was all common sense and learning the language of business.”

Through creative writing classes, Sudnya met Lynn Stegner, the daughter-in-law of the late writer Wallace Stegner, who founded Stanford’s creative writing program. “Lynn was my teacher and my editor and mentor, the one who encouraged me to go ahead and publish my novel and that’s how my first novel happened,” Sudnya says. “So my life is a lot of happenstance. I know I didn’t plan any of it. Even the engineering part. I come from a business family.”

For Sudnya, it turned out well for her to be a generalist. “When we were growing up there was a lot of value put on being a master of one rather than a Jack of all trades. A master of none was considered very negative,” she reflects. “But I actually think in my case, it worked out. Nothing’s a waste; everything informs your next step. I find that the more you do, the more you build confidence that you can become resourceful. You’re learning some skill regardless of what you’re doing.”

On that note, let it be known that Sudnya is also adept at everything from project managing large-scale custom construction projects to photography—which, by the way, led to her own clothing line. She printed blown-up photographic images of nature or her boldly painted artwork onto fabric, thinking she’d create scarves: “When the fabric comes printed, it doesn’t come cut out as the scarf, right? So, the first time it came, I just draped it like a sari. ‘Hmm,’ I thought. ‘It looks so beautiful. Why am I limiting myself to scarves?’ So scarves became saris.”

Teaming up with a fashion designer, the saris led to dresses, blouses, skirts and outerwear—now branded as the Sudnya Shroff Label, which Sudnya describes as an extension of her philosophy to integrate and embrace art into daily living. All of her work is motivated by social entrepreneurship, with proceeds directly supporting refugees, women’s and children’s causes. “My art is a platform for messaging or giving voice to whatever it is that I want to give voice to—and then tying it to my business, which is the fashion line,” Sudnya summarizes. “I sell clothes, which are made from my art, which is inspired by my activism.” 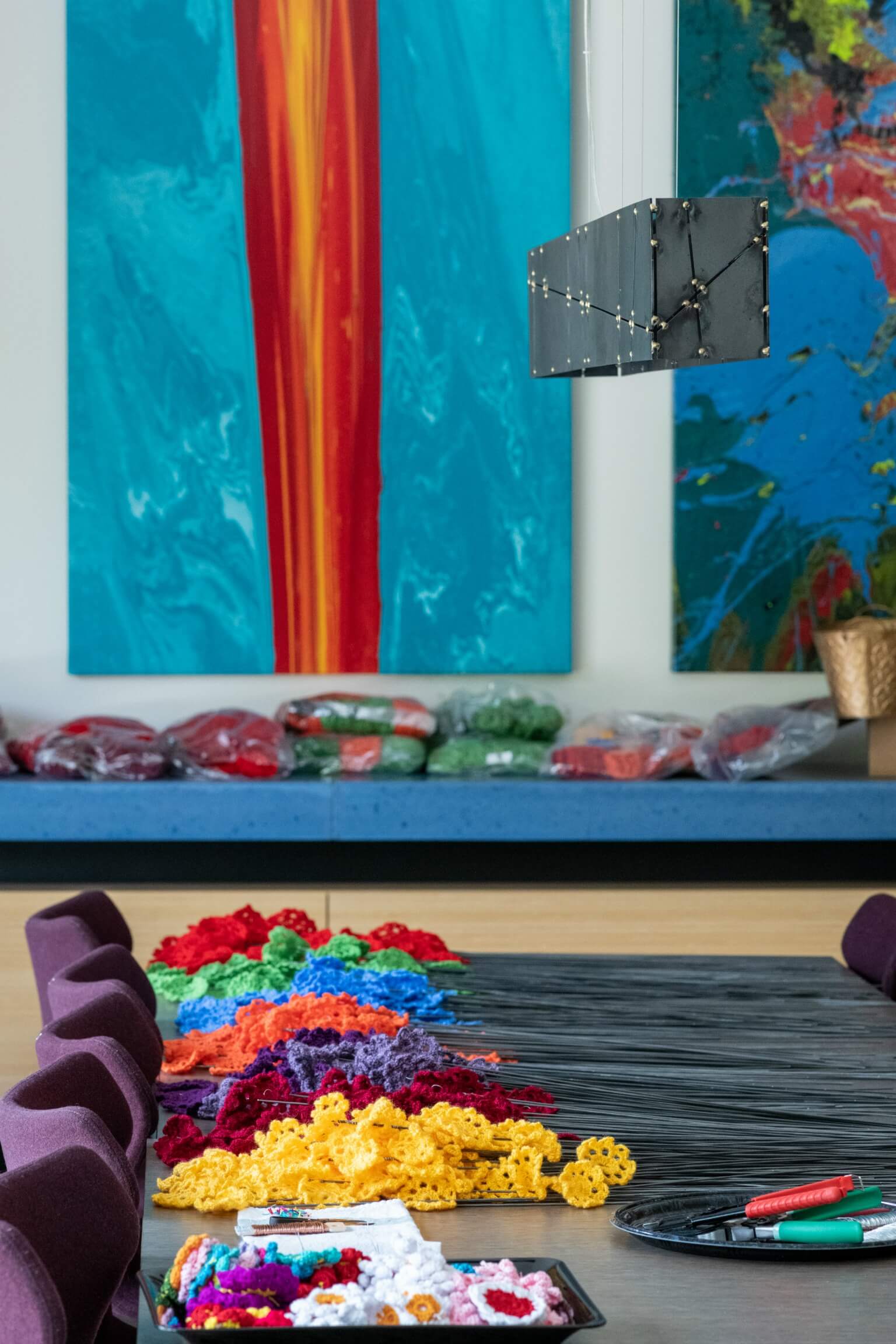 Sudnya’s home itself is a livable installation spanning the intersection of art, design, veggie garden, architecture, landscape, shop class, technology and the performing arts. Recently, she hosted a jam-packed performance and fundraiser for the LA Dance Project and its founder Benjamin Millepied—a former Director of the Paris Opera Ballet—where the dancers cavorted like nymphs through her lavender bushes and trees.

“Benjamin’s vision for dance matches my vision of my art, making it accessible to everybody and not exclusive—inclusive—which is why I love the concept that he wanted to come to my home and not build a stage,” she says. “We didn’t put up any surfaces and knowing that, we didn’t have any chairs. The whole concept was how we can live without thinking of something in a predictable fashion. You don’t have to experience dance on stage. You don’t have to experience art in a museum. You can experience dance anywhere.”

Stay tuned—there’s certainly more to come from Sudnya Shroff. What’s exciting is that even she has no idea what it will be. “Like I said, I’ve been five people already,” she muses. “I have no guarantee how many are going to be next.”