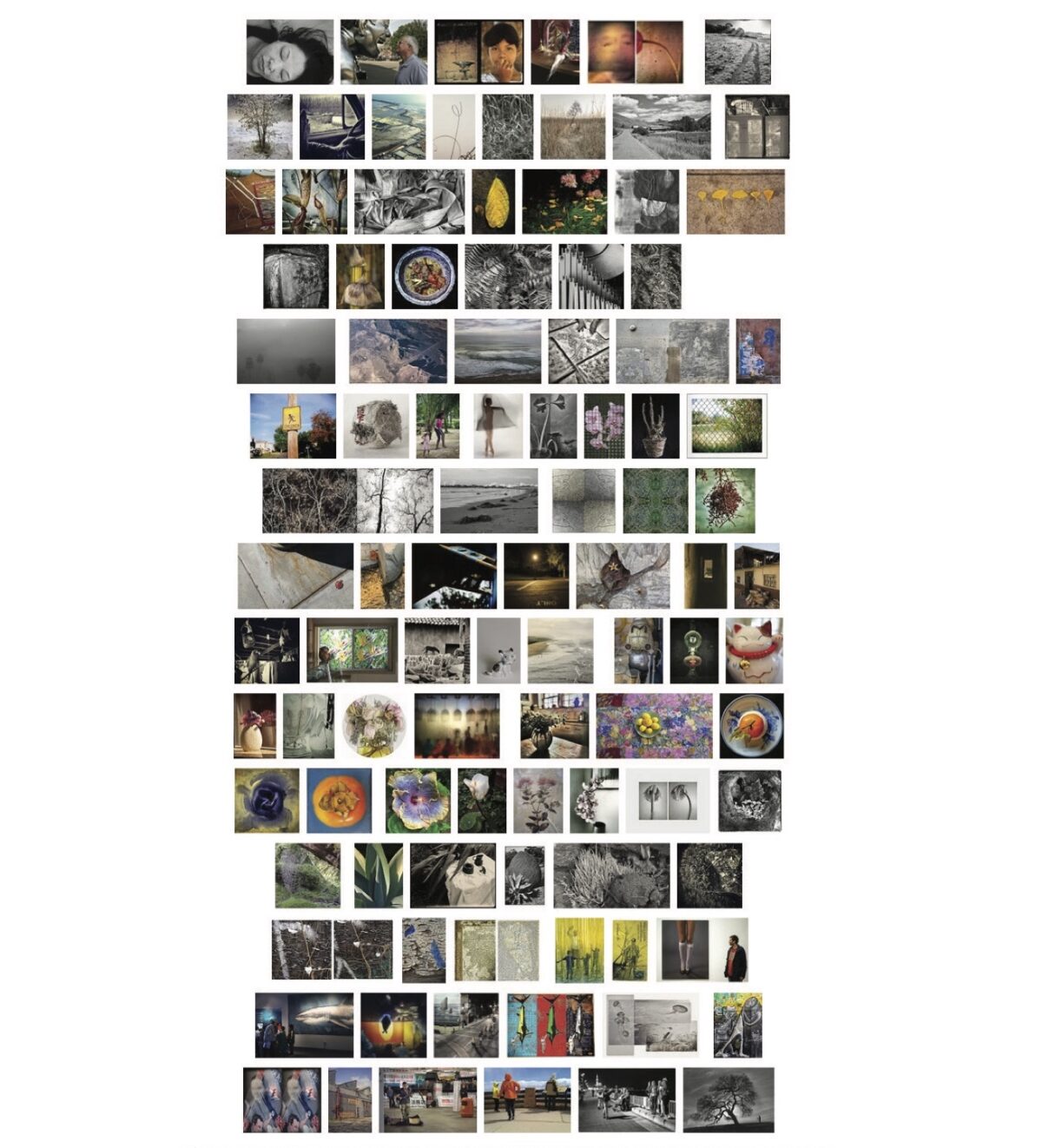 It all started with a mysterious circle, awash in textures and shades of blue. The date was April 23, 2013, and with her post, Susan Honda Eady set the game afoot. The next day, it was David Hibbard’s turn. He studied Susan’s photo and responded with a rainbow-streaked plate, which then elicited a round blue abstraction from Maude Pervere, followed by Robert Kato’s haunting take on tumbleweed.

“It’s like a game of telephone that you played as a little kid when you whisper something in someone’s ear and it keeps evolving,” explains Patricia “Patti” McClung, of the blog F8 Don’t Wait. However, in this case, no words are spoken—it’s images that drive the day-by-day visual conversation.

Originally connected through photography instructor Brigitte Carnochan, the mostly Peninsula-based tight-knit group met regularly to share, discuss and critique their work. After nearly a decade of collaboration, Dorothy Gantenbein proposed the idea of a daily blog and volunteered to take on the technical set-up. Referencing a camera aperture term, F8 Don’t Wait was born—and has been dynamically growing ever since.

“It can be color or line or shape or texture or context,” Patti further explains, when asked how she selects an image responding to the one before. “Like a dinner party conversation, you can build and continue to develop the conversation, you can go off on a related tangent, you can pick one thing that reminds you of something else or you can change the topic altogether.”

Lengthy post-production is often involved, although quickly-snapped iPhone images also show up. “I don’t know that you can really break the rules,” notes Patti.

On a recent nine-frame zoom call reminiscent of Hollywood Squares or the intro to The Brady Bunch, F8ers discuss the thought process that takes place behind the lens. The blog started with a set rotation of who follows whom and mixes up the order every few years. “Everybody’s visual personality is really distinct,” shares Rachel Phillips.

Sometimes, they say, the evolving theme seems obvious—trees, paths, food or even a mood, like loneliness—but they also encounter real head scratchers.

“Katie’s images have a dreamy aspect to them—they are sometimes ghostlike, ethereal,” offers Maude. “Sometimes Katie sends me for a loop!” adds Susan. “I like experimenting,” Katie Parquet acknowledges.

“I have a whole bucket of ‘Bill made me do it!’ images,” injects Dorothy. William “Bill” Bishop quickly responds, “I treat every F8 contribution as serious art; it’s a big deal for me.” Maude can’t resist a playful jab: “And it feels that way if we’re behind you, Bill!”

The group calls out lifelong photographer Robert Kato as particularly challenging to follow. “He has this way of saying something quite profound,” observes Patti, “that just touches you and gets you thinking about your images and what you want to say.”

“Patti’s images remind me of a memory map,” Dorothy comments, in a nod back to Patti. “And I think of Rachel as a Victorian time traveler; there’s always an element from another era in her work.”

Rachel describes the “delicious panic” she feels when her turn is coming up. “It really expands your visual playground,” she says. “You get to riff on all these images that are so different from your own.”

Tallying up F8’s many benefits is an easy exercise for the group: tuning the eye and exercising creativity, sharing visual explorations in sympathetic company, digging into the archives to unearth forgotten images and capturing shots they wouldn’t have otherwise thought to take. But above all, they say, the blog has deepened the friendship of its members.

“To me, it’s really a miracle group,” Bill reflects, “because we are so diverse and we get along so well.” With everyone nodding in agreement, Dorothy caps it off: “We all admire and  enjoy each other’s work, and I think that holds us together.”

While F8’s intent is to visually communicate with each other, the photographers have also staged two Bay Area “physical world” exhibits that capture their blogging journey. Given that f8dontwait.com is currently closing in on 450,000 views, there’s clearly curiosity about what they’re saying. With that in mind, PUNCH invites you to meet the F8 team and eavesdrop on a few favorite conversations.