A single innocuous goldfish—as in the orangey-yellow snack variety that wears shades and a goofy grin on the package. That was the culprit responsible for Tessa Grosso’s first trip to the emergency room. “Tessa was nine months old and crawling,” recalls her mother, Kimberley Yates, “and a kid spilled a bag of Goldfish crackers. Tessa picked one up and put it in her mouth before I could get to her.”

Rashy skin prompted Tessa’s food allergy testing at six months, so the Menlo Park family was already on high alert. “Dairy, wheat, eggs, peanuts, tree nuts, soy, shellfish … it was everything,” recites Kim. “They didn’t even have EpiPens for babies. I was given a syringe of epinephrine and we were just told to ‘avoid.’ But you don’t really understand how allergic they are or how dangerous it can be.”

At 22 months old, Tessa did more than cry over spilled milk. She nearly died from it. “She was completely lethargic in my arms,” Kim shudders, describing Tessa’s second trip to the ER and subsequent harrowing rescue. “That took us to another level for sure.”

Growing up in Portola Valley, as the youngest of five kids, Kim fondly recollects her own childhood—double scoops at Menlo Park’s Baskin-Robbins, hiking the Dish, playing tennis for Menlo School. Food allergies weren’t even on her radar until she met her children’s father, who was allergic to peanuts and tree nuts. They had Tessa—followed by two food-allergy-free daughters, Reese and Alyssa, within the span of three and a half years. 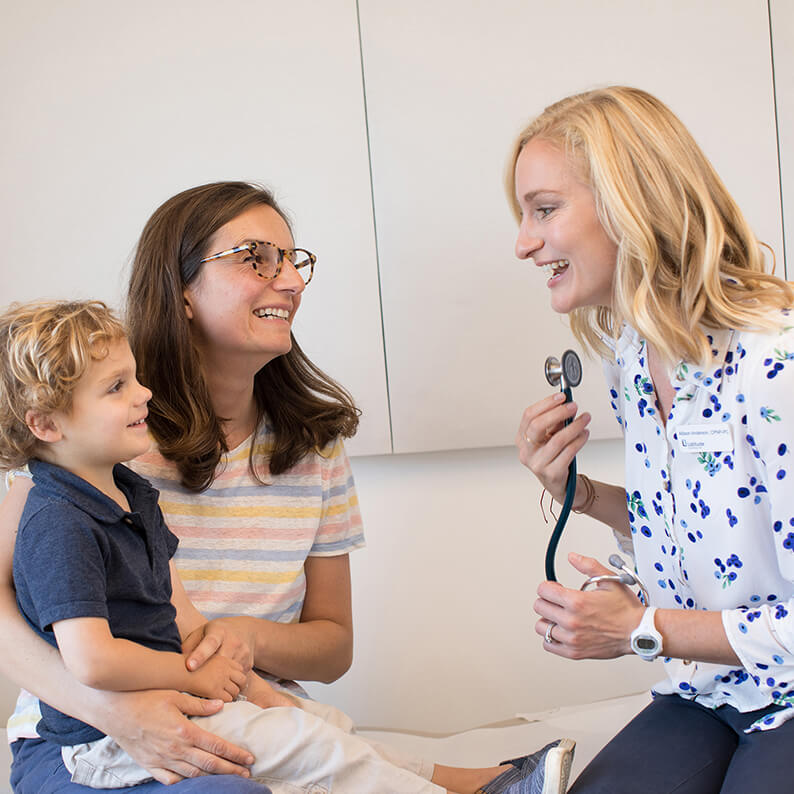 After the milk incident, the severity of Tessa’s allergies turned navigating everyday life into a minefield. “Our house was the only safe place for Tessa—no dairy, no wheat, no eggs, anything that would put her at risk,” says Kim. “Reese and Alyssa were amazing. They practically came out of the womb protecting Tessa and had to be incredibly responsible at a very young age.”

Despite the family’s hyper-vigilance, a restaurant substitution in a noodle recipe sent Tessa to the ER again as a second grader. And when Kim went away for a weekend, she returned to find out that Tessa had stopped eating. “In her mind, she was thinking, ‘If I don’t eat, I can’t die,’” recounts Kim. “And I just said, ‘Enough of this!’ I didn’t want to hear that there’s nothing we could do—just ‘Avoid! Avoid! Avoid!’ No matter how hard we tried, we couldn’t keep her safe enough.”

That was the turning point for Kim: the desperate sense of futility that flipped her switch from protective mother to mom on a mission and ultimately, to the founder of Latitude, a Redwood City-based company of food allergy clinics exclusively focused on diagnosis, prevention, treatment and long-term care. Given that more than 32 million Americans are diagnosed with food allergies including 1 in 13 kids, Kim knows first-hand that avoidance isn’t always a viable solution. “We’re trying to give people the latitude to live freely,” she stresses.

Which is all that she wanted for Tessa.

Back in 2009, at what felt like a peak of frustration, Kim heard a relatively new Stanford allergy and asthma expert, Dr. Kari Nadeau, talk about treating peanut allergies using oral immunotherapy (OIT). Nadeau explained that by regularly exposing patients to increasing amounts of food allergens, OIT could desensitize the body and protect against life-threatening reactions.

For Kim, it felt like a lightbulb—or even lightning bolt—moment. OIT represented offense—not just defense. “What can you do to help kids like Tessa who are allergic to multiple foods?” she asked Nadeau after the event. “I don’t know,” Nadeau responded. “But I promise you, I’ll figure it out.”
That set in motion a life-changing partnership—with Nadeau working the science side and Kim leading the charge to support her efforts. Coming from a background in software sales, Kim channeled her passion, drive and understanding as the parent of a food-allergic child into a challenging new calling. “Inspired by Tessa, Kari wrote the first multi-allergen clinical trial,” she says, “and I banded with other moms to raise the money for the trial and build a big community around Stanford and Kari.”

With the FDA’s approval and under Nadeau’s supervision, Tessa began receiving shots of Xolair, a drug that suppresses allergic reactions, and in 2012, her OIT treatment began. Starting with the tiniest amounts, the nine-year-old followed an “updosing” regimen every two weeks, progressing from allergen flours and powders to crackers, peanuts and M&Ms. For Tessa, eating “normal” was far from a treat—it meant overcoming the terror of eating the food that had almost killed her. “When we were walking in on that first day, I made a vow,” Kim remembers. “I said, ‘If this works, I won’t stop until everybody has access to it because nobody should be this afraid of food.’”

The groundbreaking trial resulted in Tessa becoming the first patient to be successfully treated for multiple allergens simultaneously, which fueled even more momentum. Drawing on additional community support, Kim and Nadeau teamed up to drive the creation of Stanford’s world-renowned Sean N. Parker Center for Allergy & Asthma Research. With Stanford focusing on clinical research, the pair recognized a bigger need for clinical care, which led to the founding of Latitude in 2018. “We follow evidence-based protocols that have been proven in clinical trials so we know that they’re safe,” explains Kim. “Our plan is to expand nationally through a mixture of building our own clinics and partnering with other allergist and pediatric practices.”

Now, as CEO of a company with five Bay Area locations and an impending expansion to New York, Kim is adamant about crediting the passionate army mobilized behind the food allergy fight. “I’ve had so many incredible people come into my life and say, ‘You can do this and we’re going to help,’” she emphasizes. “My motivation is for Latitude to be hugely successful so that we can change as many lives as possible.”

That “we” includes Kim’s now teenage daughters Tessa, Reese and Alyssa, whom Kim refers to as her partners in Latitude. “It’s been amazing to build this company with the girls,” she shares. “It’s been real-world training for them—all the things that you think about to open a clinic. They were involved in the branding process, the fundraising, they went with us to look at spaces. It’s been so fun for me to have them involved and I’m so proud of them.”

Originally diagnosed with more than a dozen food allergies before OIT treatment, 19-year-old Tessa is currently wrapping up a gap year, without constraints. Although it’s considered premature in the allergy world to use the word “cure,” Kim says it’s staggering to process her oldest daughter’s remarkable journey. “She’s the greatest poster child for this, right? Tessa just got back from Thailand—what peanut-allergic kid can go to Thailand on their own?” she marvels. “For all intents and purposes, Tessa eats freely, but she will always carry EpiPens because psychologically she knows that’s what saved her life.”

Reflecting back on Tessa’s early trauma remains heartbreaking for Kim. While she gets immense satisfaction in Latitude’s treatment of adults and teens, it’s the youngest food allergy patients who help mitigate the bad memories. “Treating the little ones is the best,” she affirms. “They’re never even going to know they have food allergies. Our goal is to treat them before the fear sets in.”