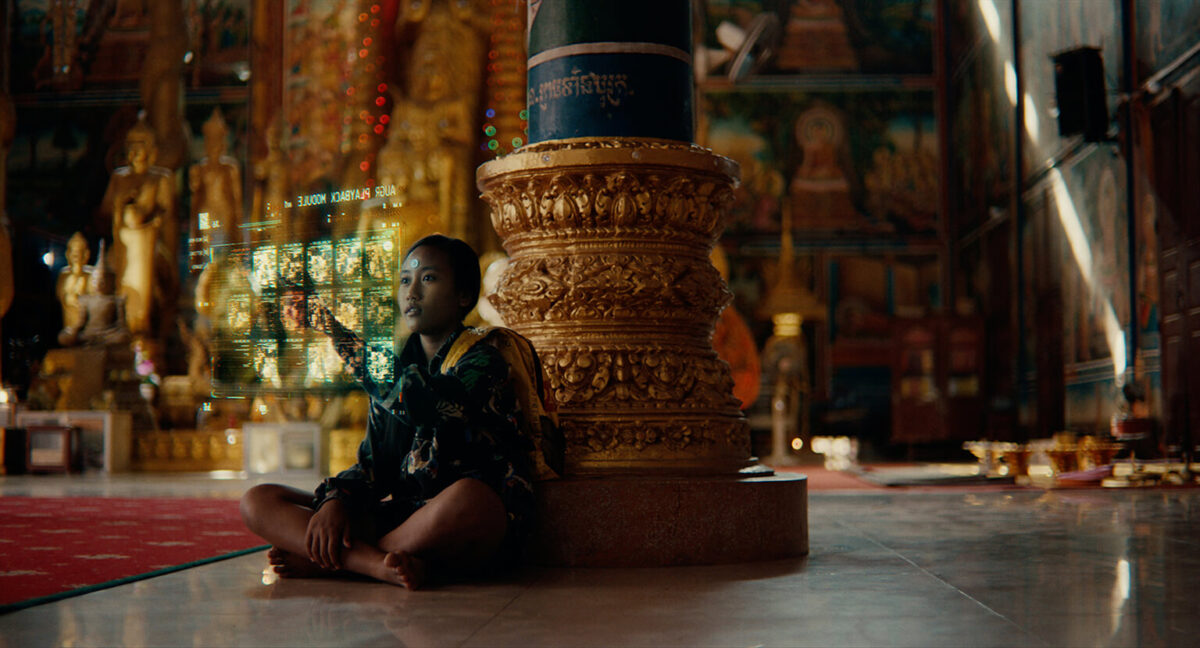 When director and Peninsula native Jake Wachtel tells people he filmed his breakout movie in Cambodia, many ask if it’s a documentary. Not even close. Try Buddhist sci-fi mystery.

Now before your mind jumps straight to space sagas and CGI aliens, you should know that Jake’s film Karmalink is set in the not-so-distant future on planet Earth—a lower-income neighborhood in Phnom Penh, to be precise. And it’s a whole new flavor of sci-fi. While glossy-sleek, ultra-urban cityscapes can feel like a fever dream, Karmalink’s world seems much more plausible—and right around the corner. There’s something grounding in its depictions of drones, augmented reality and biotechnology alongside dirt streets, abandoned train cars and a community facing forced evictions.

Beyond the masterful juxtaposition, Jake’s story of a young treasure seeker and his adventurous friends reveals the cultural differences between Cambodia and Silicon Valley (Jake was born and raised in Menlo Park) as well as marvels at our shared humanity. “I really love near-future and plausible sci-fi as a way to expand our minds of what’s possible and point us to what’s going on in the present,” he shares. “And I think that there’s a great capacity in sci-fi to talk about socio-political issues.” 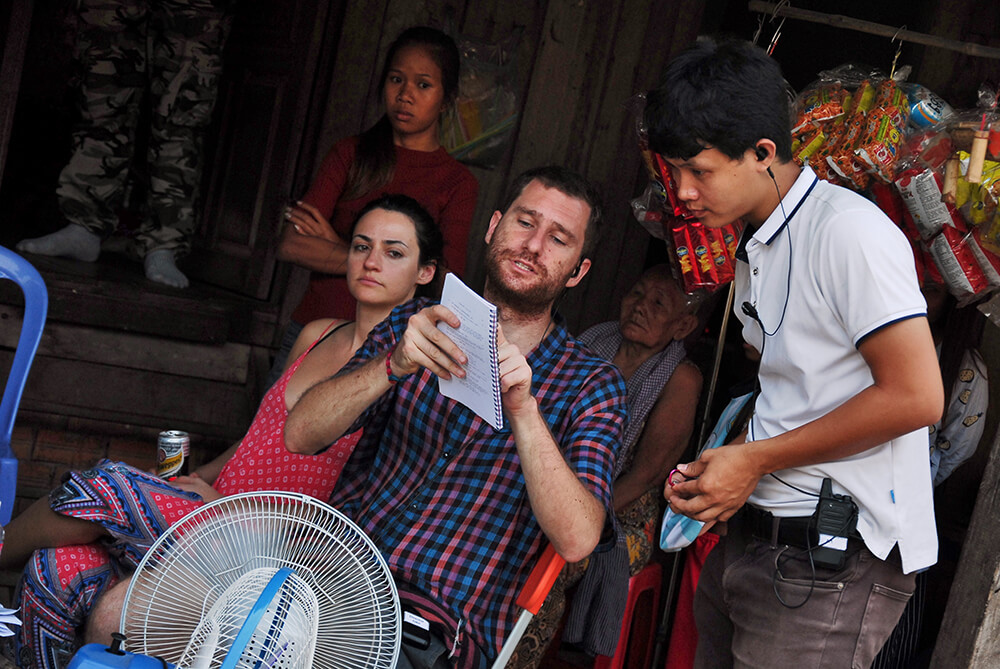 Touted as Cambodia’s very first science-fiction film, Jake’s movie questions our preconceptions of where a sci-fi should be set. “Cambodia’s hurling headlong into the future,” asserts Jake, explaining that the country’s native digital fluency is exceptional. “There’s this idea of technological leapfrogging where people who aren’t beholden to older forms of technology can more readily embrace new technologies.”

After its world premiere in 2021 at Venice Critics’ Week, Karmalink made the film festival run and was released last month to streaming services. Heralding U.S. filmmaker Jake Wachtel’s “striking feature debut,” Variety describes Karmalink as a “magical spiritual mystery tour” that “takes viewers on a fascinating and frequently wondrous expedition to a place where science and metaphysics intersect.”

For Jake, filmmaking has always been about building bridges. As a young teen, he recalls bringing his new MiniDV camcorder on a trip to the rainforests of Ecuador with his grandmother. “The goal was to document what was going on,” Jake says, “but it also served as a means of connection with the kids in the village.” He recalls a group of Ecuadorians clustering around him to check out his camera—then getting invested in pointing out all the things he should film. “I guess I see in this moment the seeds for later explorations,” he reflects.

By his early 20s, Jake had become a citizen of the world, filming documentaries for NGOs and nonprofits in various countries. When an opportunity to teach film in Cambodia for a year with Filmmakers Without Borders presented itself, he jumped. “I was finding myself really hungry to dive deeper with a single community,” he shares.

Karmalink’s future stars—Srey Leak Chhith and Leng Heng Prak—signed up for Jake’s 2014 class and acted as the leads in the course’s final project: a superhero movie where Student Girl must defeat Dropout Boy and his diabolical plan to cancel school. Both were naturals on camera. And Leng Heng not only played the villain but also served as director. “I have this fun photo of him dressed in full Dropout Boy costume directing the other kids,” he laughs. 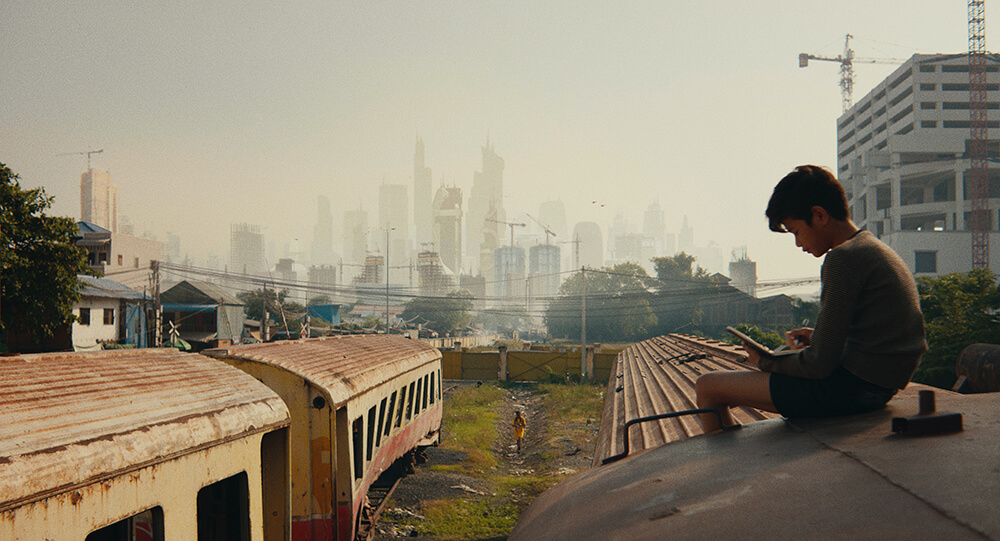 Fittingly, Jake also fell for cinema at a young age. At 13, right before attending Menlo-Atherton High School, he encountered the magic of Hitchcock’s psychological thrillers at the Stanford Theatre. “I just remember being so captivated,” he recalls. The vintage design of the venue—in addition to the organ player, lifting out of the floorboards like a rabbit from a hat—also left an impression. “I felt so transported and brought into these worlds,” he notes.

It wouldn’t be until the end of his first year in Cambodia, during a meditation retreat, that the idea for Karmalink first entered Jake’s mind. As the story began to take shape, the filmmaker found himself telling the tale of a young boy who recalls his past lives through dreams, then determines to hunt down the gold artifact he believes he hid long ago.

It would take several more years before production began in earnest. But Jake says he wouldn’t have it any other way. “It doesn’t really feel right to me to fly to a new foreign place and make a movie there,” he explains. “This connection to Cambodia arose organically. And it’s become a very deep and special place in my heart.”

Jake fondly recalls those early days of steeping in the local culture, of “getting used to the rhythms of the monks coming through in the morning asking for alms, and the giant pots of steaming corn that the ladies load on their bicycles to go sell in the market.” More than anything, he admired the beautiful sense of community. “Everyone knows each other,” he says. “Everyone’s looking out for each other.” 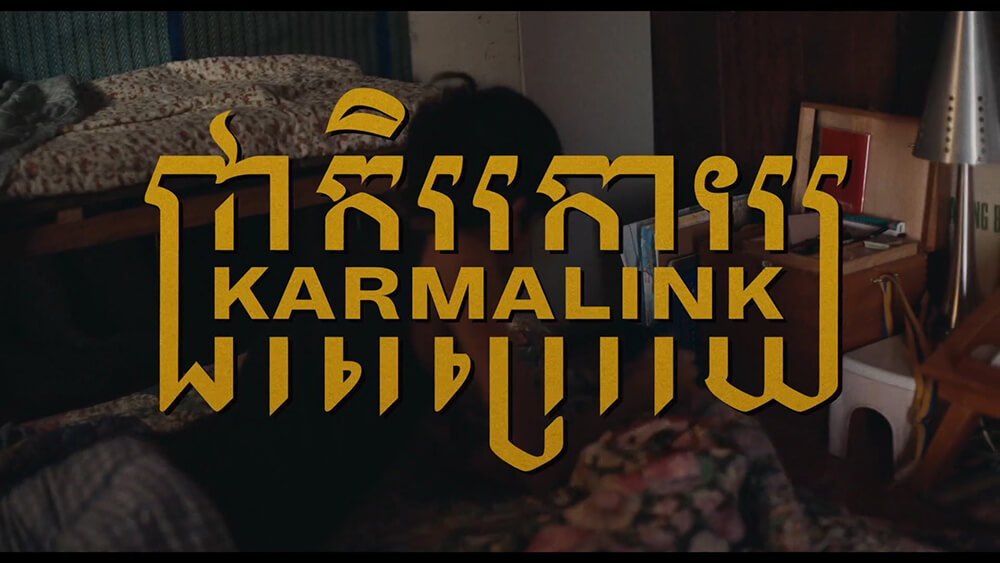 Even after deep immersion, Jack knew his perspective would be limited. However, with a roughly 90% Cambodian cast and crew, he had help navigating those nuances. “I tried to make clear to everyone, ‘Please, at any moment, if anything’s going on that doesn’t feel right or you have some ideas, let’s talk about it. Because I want this to really feel like your story, like this makes sense from your perspective.’” And even though Jake is proficient in Khmer, he had Cambodians translate the script in order to capture the subtleties of the country’s official language.

Although major changes were made to his screenplay after Jake recruited the help of Christopher Larsen (an experienced American screenwriter living in Lao), Jake found that the most significant changes weren’t plot points. “I think that, in a lot of ways, where the collaboration is most meaningful is all of the small details,” he explains. Like “how the family sits around dinner together; how they sleep together, curled up on the mattress. It’s a lot of stuff around how families relate to each other.” In one scene of the film, Leng Heng consoles his grandmother by taking her arm and massaging it. “I didn’t write that in the script,” Jake reveals. “I didn’t even know that that’s a very intimate moment in Cambodian family life.”

The film also explores Buddhism (Cambodia’s leading religion and beliefs Jake holds), and there’s a fascinating undercurrent on whether technology progresses or hinders the search for enlightenment. Intriguingly, in Karmalink’s future world, people can only access and view augmented reality by placing a dot-sized piece of tech in the middle of their foreheads—recalling the third eye or “eye of consciousness” said to reveal the world beyond one’s physical sight. “Buddhism saturates the fabric of daily life in Cambodia,” Jake shares. “It’s very common for people to remember their past lives. It’s not out of the ordinary at all.” 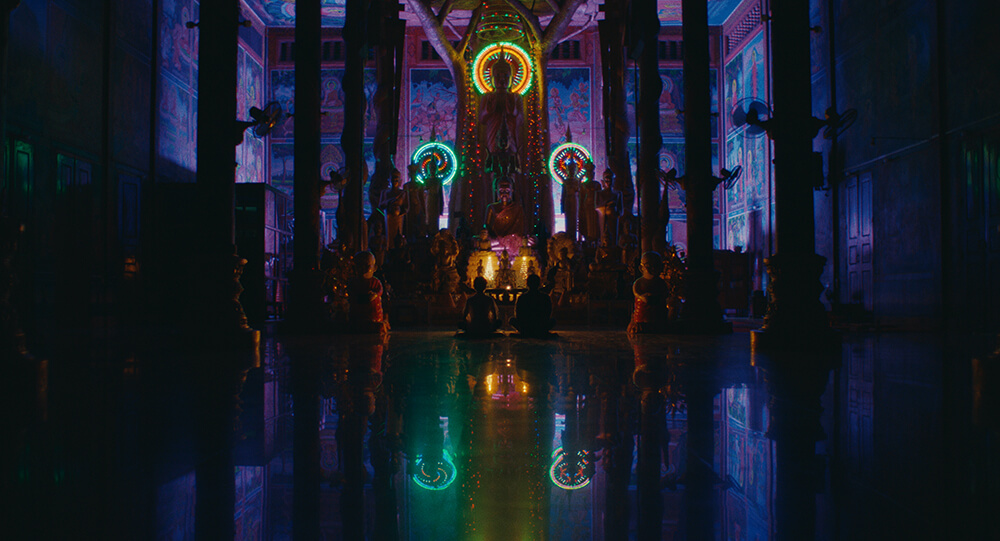 But like every story, this one carries universal themes as well. The strength of a tight-knit community, the bravery of big-hearted kids and the power of friendship are topics that transcend time and borders. So is the coming-of-age scenario. “It’s such a common and important story in cultures around the world: demarcating this passing from childhood to adulthood,” Jake notes. “It just so happens to be around the time when our brains really start to crystallize a lot more. We start being open to so many possibilities.”

The topic of memory and brain development is near and dear to Jake’s heart. At Stanford, he majored in psychology while minoring in film studies, delving into neuroscience and film theory, cultural psychology and the history of global cinema. He also worked in a lab for a season, researching the cognitive differences between monolingual and bilingual children: “I was manning an eye-tracking device that’s following the baby’s gaze, as they watch these videos and look around. We’re sponges from the get-go!” Needless to say, you should expect Karmalink to mess with your brain a little bit. But in a good way.

It would be at the intersection of these two studies that Jake came to a life-pivoting realization: “What makes us human is our empathy.” For the filmmaker, cinema is the ultimate empathy generator. “It can literally bring us into the lives of other people who live seemingly so differently from how we live.”

And it’s this mindset that makes Karmalink so powerfully collaborative. “I think a lot of people talk about the director needing to have the vision and telling people, ‘This is how it’s going to be.’ That’s not how I operate,” he chuckles. “I love that it’s this team project!” He smiles when he adds, “They say it takes a village to make a movie.”