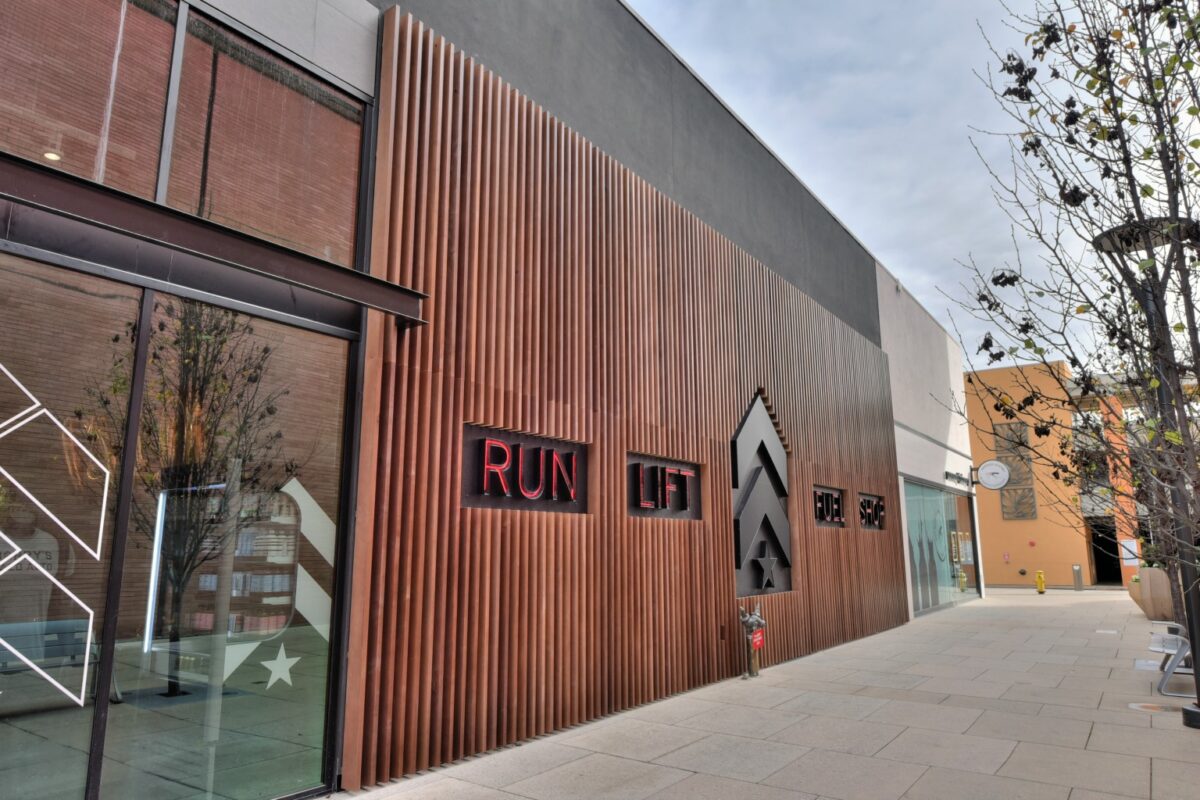 The door opens, and Barry’s Bootcamp instructor Nichole ushers a mix of workout gear-clad “loyalists” and first-timers into the Red Room. Spots are pre-assigned, so everyone knows where to go—half grab weights and head to two rows of benches with the other half hopping up on treadmills. Reminiscent of a night club, Barry’s signature lighting casts a red glow over the space and a state-of-the-art sound system pumps out pulsing loud music. Zipping past the benches, Nichole calls out, “Bring that weight behind your head. Two pulses and PUSH IT UP!” Like a rockstar working the stage, blond ponytail flying, she whips over to the line of treadmills: “Get ready for six, seven or eight. You’re going to give me that speed in three, two, one. NOW!”

The Peninsula just got Barry’d. With recently-opened studios in Burlingame and Stanford Shopping Center, Barry’s immersive cardio and strength interval workout is the newest addition to local group fitness offerings. We talked with Bay Area managing partner Adam Shane about Barry’s putting boots on the ground on the Peninsula.

Barry’s was originally founded in 1998 in West Hollywood and has 50 locations worldwide. Why is 2019 the year for Barry’s to open on the Peninsula?

Honestly, I’ve been looking on the Peninsula for a long, long time. The real estate market in the Bay Area is as tight as any in the world, and so we’ve been really working hard to find the right locations on the Peninsula. We’re very excited about Palo Alto, Burlingame and Santana Row in San Jose, which is starting construction in early March. We’re thrilled about the growth this year. Barry’s has truly become a global lifestyle brand.

What do you mean by lifestyle brand?

People want to have Barry’s where they live and where they work, so if you’re on the Peninsula and you’re commuting to San Francisco or vice versa, you have Barry’s as part of your lifestyle. It’s one of the stops in your routine and it’s a part of your community. When you think about your Barry’s class, it’s 50 minutes to an hour and then after class, you’re meeting friends or going out for brunch or going shopping at Stanford Shopping Center or on Burlingame Avenue. In cities like Burlingame and Palo Alto, you’re doing everything—you’re shopping, you’re eating and you’re working out. How do the two Peninsula studios reflect their locations?

Within the four walls of Barry’s, you are always going to have your workout room, what we call the Red Room because it has red lights, lockers, men’s and women’s locker rooms, which are fully amenitized, a retail area and our signature Fuel Bar, where we do smoothies and shakes and grab-and-go items. When you walk into each location, they look and feel like you’re at Barry’s, but each location is somewhat unique in the sense of how we build them out and think through the design. In Burlingame, it has an old refurbished barn look that’s really cool, hip and current and then we put a brand new storefront on so it’s a modern glass building. In Palo Alto, we did a new glass facade with a wood slat structure that really takes in the personality of Stanford Shopping Center.

Describe the idea behind boutique fitness.

There’s big box fitness, which is a big facility, 20,000-plus square feet, where you’re lifting weights, doing cardio, maybe doing a class or all sorts of different things. Boutique fitness is a smaller facility specializing in one or maybe two programs. Barry’s really was the first of its kind to have a workout where you were running on the treadmill and strength training on the floor, and that combination over the years became the signature of Barry’s Bootcamp. I think group fitness as a whole—Barry’s Bootcamp, spinning and cycling, yoga and pilates—has spawned a whole new industry of boutique fitness that is growing exponentially on almost every corner of every street in every major city.

Tell us about Barry’s workout.

Interval training is the essence of what we do. It brings the heart rate up, it builds lean muscle, it burns fat and that combination is really what works and gets results, and we have fun doing it. Working out is always work, but the more fun you have, the more you want to come back. The instructors coach you through every move, really trying to get you to maximize your output, and I think people tend to surprise themselves with what they’re able to do.

You make a big deal about the community aspect of Barry’s. What’s the story there?

Barry’s just has that fun, hip, high energy, and when you’re in a room with that energy and other people around you, it is really inspiring and motivating and I think that’s all part of it. That’s the group fitness experience, in particular, with Barry’s. Everyone around you is really driving towards the same thing and I think that carries people through and pushes them a little harder. If I was to take class next to you and I’m running or sprinting at a ten on the treadmill and you’re sprinting at a six, it’s all good. You’re pushing yourself. I’m pushing myself. We’re doing it together, we’re doing it next to each other, we’re high-fiving each other through it. How much does a workout cost?

Our single class rate is $35, if you wanted to buy just one class. The larger the class package you buy, the more the price comes down. We always offer a really good first-time three-pack promotion, so look for that too.

Back in the Red Room, it’s the final minutes of class, and Nichole is whipping the fervor up even higher. “If not now, when are you going to do it?” she challenges the benches, followed by a quick sprint to the treadmills. “Give me that 9, 10, 11!” she demands. “I want to see a number you haven’t seen yet. I want you to surprise yourself!” Finally, at last, the red lights dim and it’s cool-down time. Sweat, exhaustion, relief. “We are all about empowering each other in here,” Nicole says, offering up a final high-five. “That was nothing short of incredible!”