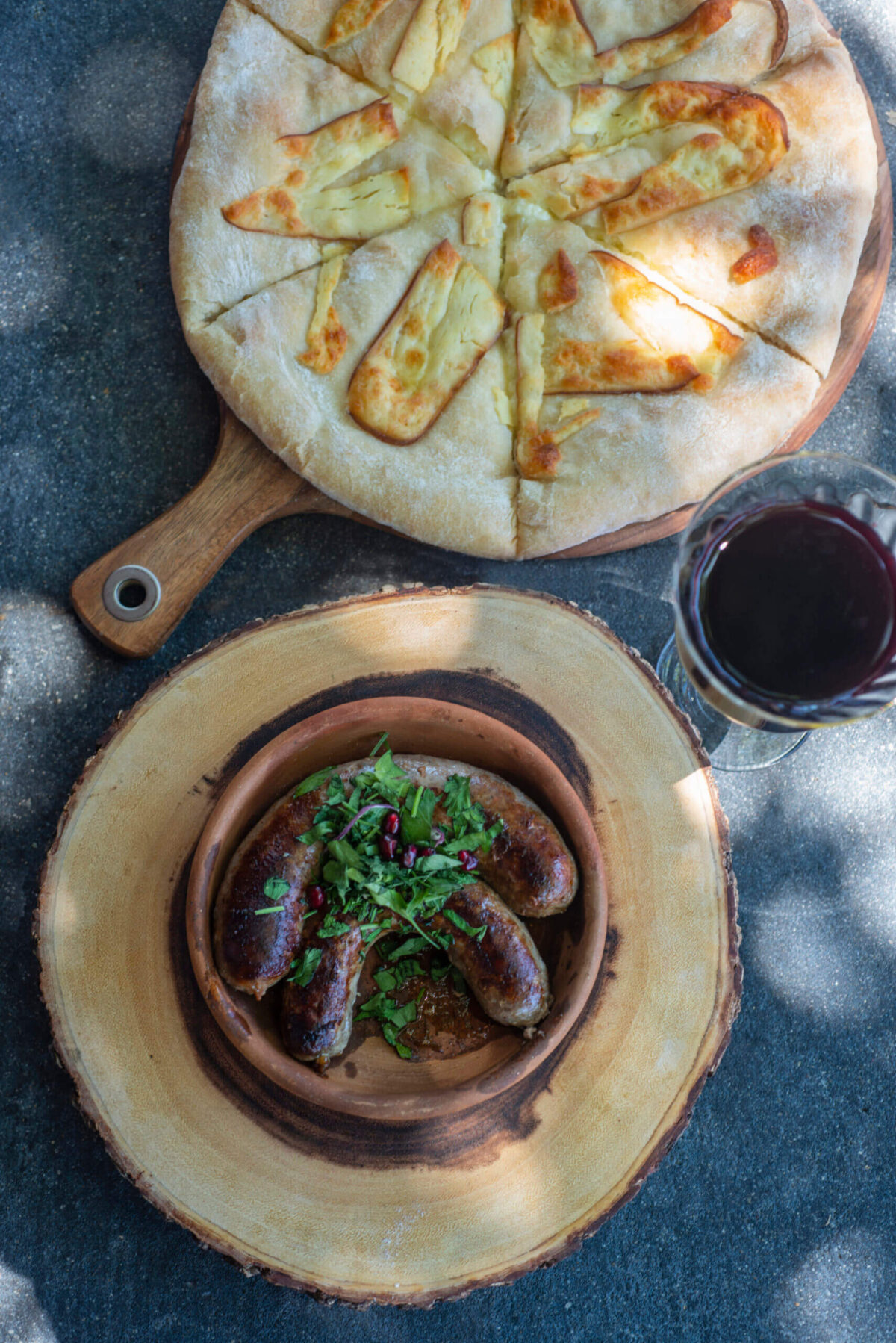 In addition to soups, stews and salads, Georgian cuisine has “a lot of food you eat with your hands,” says Tamari Authentic Georgian Cuisine owner Shalva Dzotsenidze.

Take, for example, khinkali, pleated soup dumplings filled with meat, vegetables or cheese. When trying one for the first time, Shalva recommends that “you hold it from the top and take small- to medium-sized bites first—and then you slurp the juice.” He acknowledges that it takes a bit of practice. “Once you get more experience, you get the bites and the juice together,” he says. “You figure it out.”

Khinkali, which might remind you of xiao long bao (Chinese soup dumplings), is having a moment on social media these days, as is the much-Instagrammed acharuli khachapuri, a boat-shaped bread filled with cheese and topped with a soft egg. However, there’s much more to Georgian food than these two social media darlings.

Georgia has a rich history of cuisine and hospitality, and thanks to the Georgian government’s push to open up tourism in the past decade, the country’s cuisine has caught the attention of travelers, diners and food media. Given Georgia’s location in the Caucasus region, at the intersection of eastern Europe and western Asia—a culinary crossroads, if you will—you might imagine that the country’s cuisine is similar to Mediterranean, Middle-Eastern or Asian food. 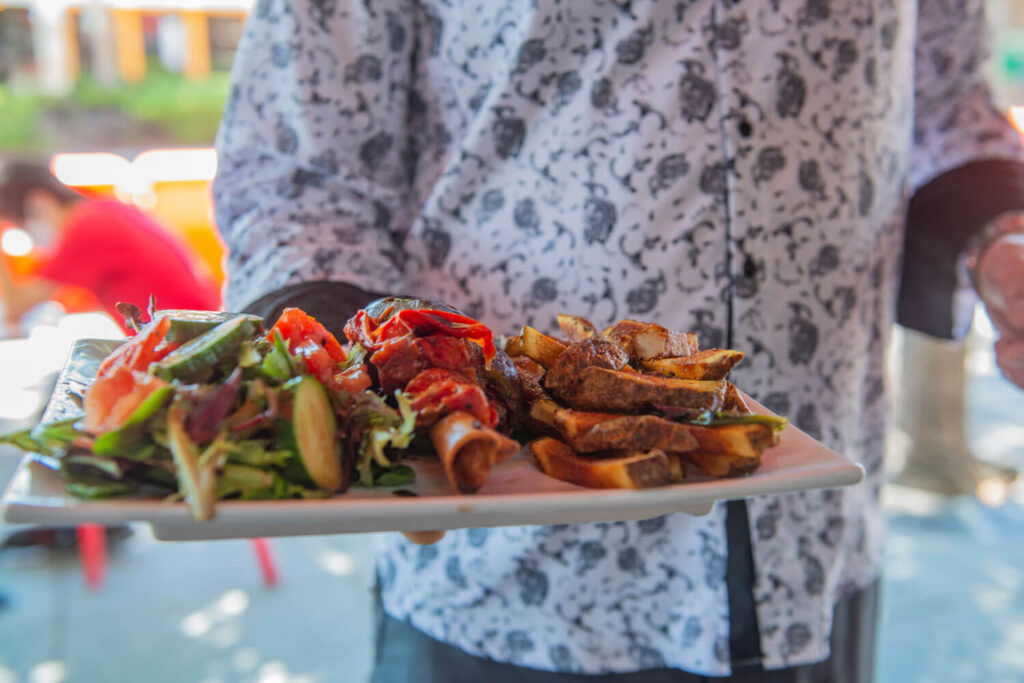 And while at first glance you might see common threads, Georgian cuisine is something all its own. Garlic, fresh herbs, blue fenugreek seeds, dried marigold petals, spicy ajika paste, walnuts and pomegranates are just a few of the ingredients used in traditional Georgian cuisine.

Shalva opened Tamari—named for his daughter and grandmother, as well as for Queen Tamar who ruled during Georgia’s Golden Age in the late 12th century—in February 2020, just two weeks before the Bay Area’s shelter-in-place orders went into effect. (Talk about timing!)

But Shalva is no stranger to taking on challenges or rolling with the changes; he grew up under the Soviet regime in the Georgian capital of Tbilisi, and as a young adult, he participated in the movement for independence from the Soviet Union.

In 1989, Shalva left his hometown to live with cousins in Oni, a town in the mountainous Racha region of western Georgia. There, he had his first experience running a restaurant.

“We were the first generation of entrepreneurs in Georgia,” he says. He and extended family members rented a government-owned restaurant and converted it into what he calls a “resort-style restaurant” that included a bakery and farm. Always seeing himself “more in the West,” Shalva immigrated to the United States in the mid-1990s, landing first in New York City with friends before soon making the cross-country trip to Palo Alto, where he now lives.

It was another two decades before Shalva returned to the restaurant business, becoming a partner in San Carlos’ Agora Greek & Mediterranean Cuisine restaurant in 2018. When the partnership ended, he retained the restaurant space on San Carlos Avenue and moved forward with a plan to open an eatery that celebrates his homeland. “It was always in my mind,” he says, “to do a Georgian restaurant because we have such wonderful cuisine that I would like to share.” 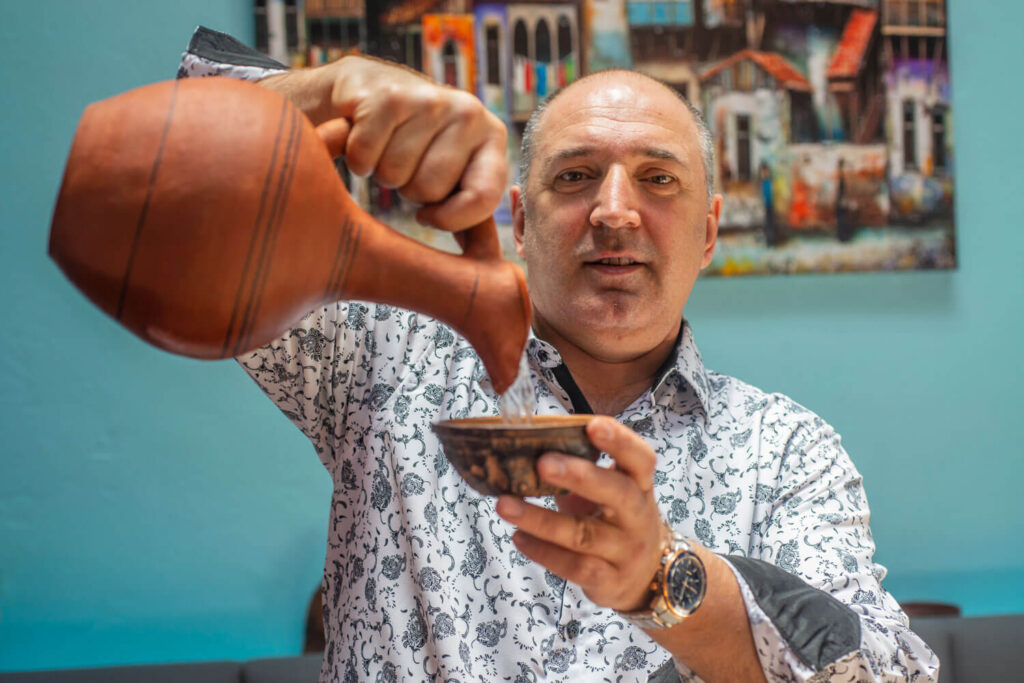 He wants Tamari to be a place where cultures connect.

Shalva began the work of creating the restaurant that would express his love for the food and culture of his homeland in mid-2019. He considered hiring a designer to remake the restaurant’s interior, but opted instead for a simple approach and handled the work himself. Tamari is a family-run business, and the interior incorporates details that reflect his homeland. His children’s names are written in Georgian lettering on walls painted in pastel colors associated with Queen Tamar, and a Georgian-style balcony sits above the bar area. Tamari’s outdoor dining space has a half-dozen small tables that can be combined for larger parties.

Authenticity remains a priority for Shalva, particularly when it comes to the food. “Authentic to me means the same food I grew up with, the food my grandmother was cooking,” he says.

His grandmother played a big role in his life; while spending time in her kitchen during his childhood, Shalva learned about the dishes that are so important to his Georgian heritage. His grandmother’s specialties included bazhe, a walnut and garlic sauce, typically served with chicken and eggplant dishes, both of which receive a nod on Tamari’s menu.

Maintaining authenticity required sourcing Georgian-style serving dishes, such as wooden boards and clay pots, as well as Georgian wine and ingredients including unique spices and tkemali, a wild sour green plum used in a traditional lamb stew called chakapuli. Because some ingredients and wines aren’t available in the U.S., Shalva had to find distributors who could import what he needed. 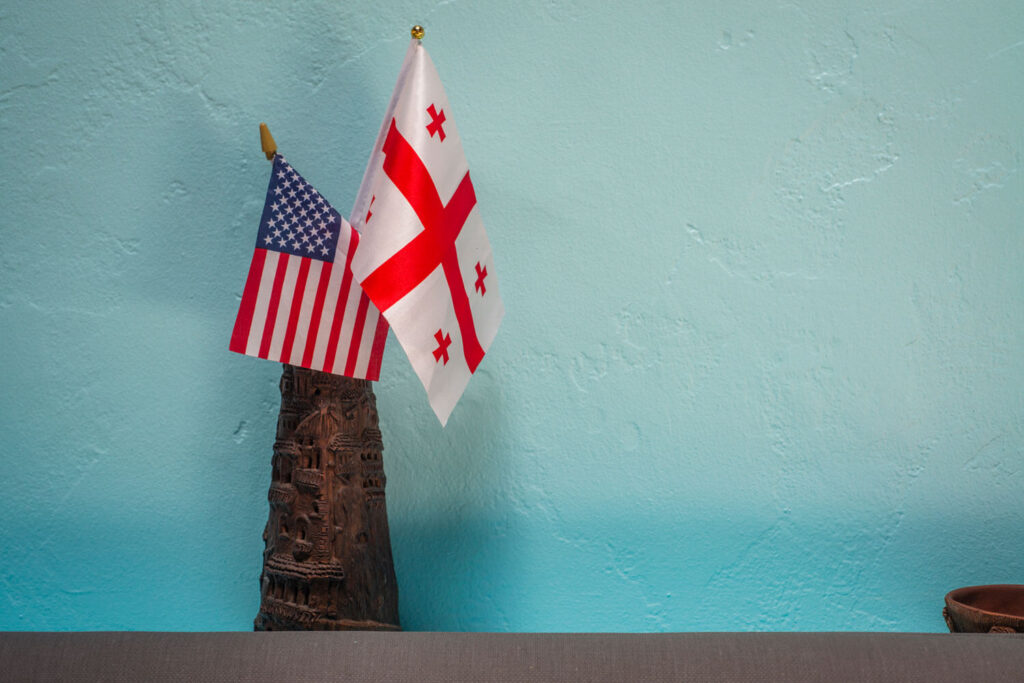 He also brought in a Georgian chef to help develop the menu and execute the recipes. Rather than focus on a single region’s cuisine, they selected popular dishes from areas throughout Georgia, with an eye on creating a balance between meat- and vegetable-based plates. In addition to offering menu items that are, as he says, “as close as possible to the taste you’d experience in a Georgian restaurant in Georgia,” Shalva wants his guests to experience dining in the Georgian style.

“We don’t have appetizers, and we don’t have main courses. We have small plates, big plates, hot plates, cold plates,” he explains, “and we always eat family-style.” The idea is to order an assortment of dishes from different categories on the menu and enjoy a bite of this and a bite of that with your beverage of choice. “You let your palate decide what you want to eat,” notes Shalva.

Dishes to try include any of the regional khachapuris, mtsvadi (Georgian shish kebab), pkhali (vegetable pâté of spinach or beets), khinkali and a tomato and cucumber salad. Lobio, a stew of pinto beans, is a traditional dish of Racha and suitable for vegetarians, as are most of the small hot plates and sides.

The restaurant’s beverage offerings include an international wine and beer list, along with soft drinks, coffees and tea. Wine plays a significant role in Georgian culture, as grape cultivation and fermentation date back 8,000 years in the nation’s history.

“What is unique about Georgian wine is the variety and also the wine-making style,” Shalva says. 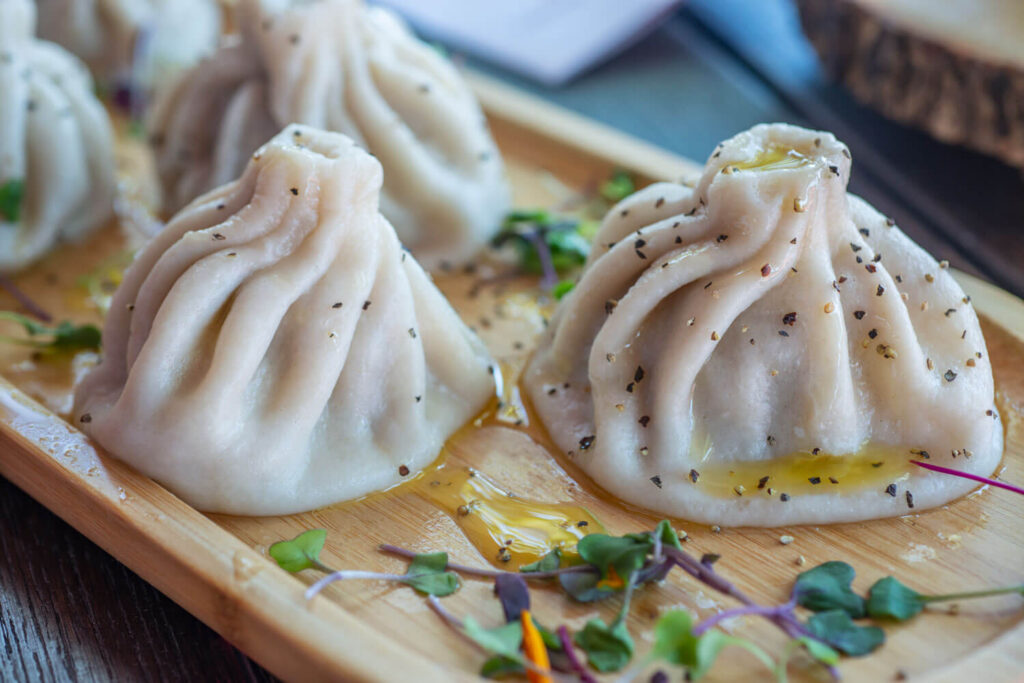 The modern style uses steel tanks or wood barrels for fermentation, and the traditional style involves placing the grapes in a big clay dish called a qvevri and burying them underground for fermentation. Drawing minerals from the soil, qvevri wines often display both fruit and mineral characteristics. If you’re a wine drinker, don’t miss out on trying a Georgian wine with your meal for an authentic experience—and don’t hesitate to ask for a recommendation. Shalva completed the sommelier program at Campbell’s International Culinary Center and is a certified sommelier.

A Georgian dining experience, Shalva says, “is friends and family members relaxing and dining,” enjoying “good food, cooked with love.” With Tamari, it seems that he’s got it figured ou