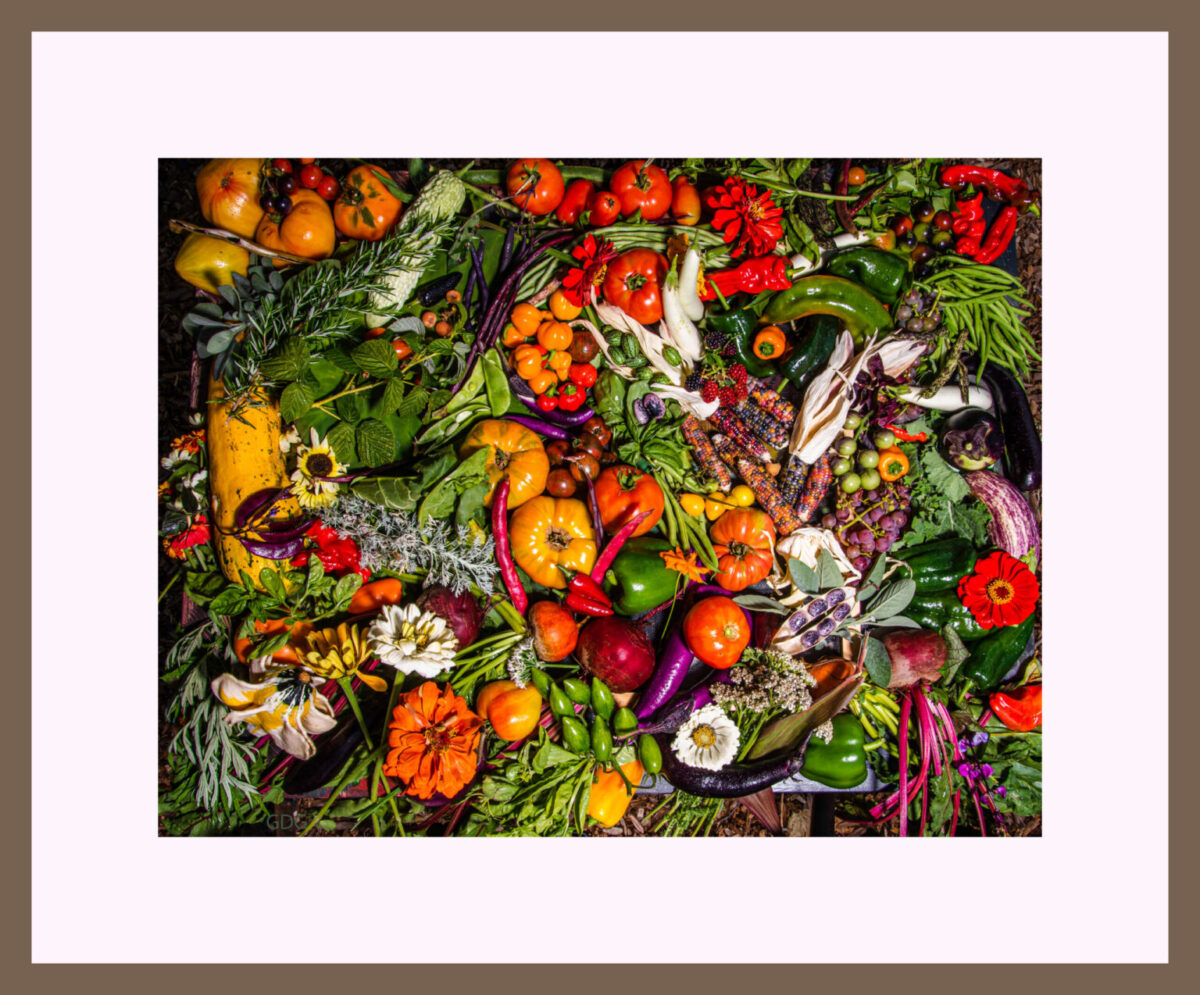 What Makes a Community Grow Together

The average time on the waitlist for a plot at the Eleanor Pardee Community Garden had historically been a few months but in the last two years, that’s grown to a year and half. Why are there now 33 people vying for a plot in the garden?

“It’s the energy of being in here and around so many gardeners,” says Lisa Van Dusen, a recent addition. “How many Master Gardeners per square foot are in here?” she asks rhetorically. “There’s a lot of experience here and people are very generous with their knowledge.”

In Palo Alto, some of the most exclusive clubs have nothing to do with tech, wealth or society but everything to do with dirt. Sponsored by the city, there are five community gardens scattered throughout the neighborhoods—dedicated public oases of open space, fertile ground for vegetables, flowers and herbs.

What first began with the Rinconada Garden has flouristed to include Arastradero, Edith Johnson, Ventura and Eleanor Pardee Gardens. Each one has its own rich culture and unique produce. 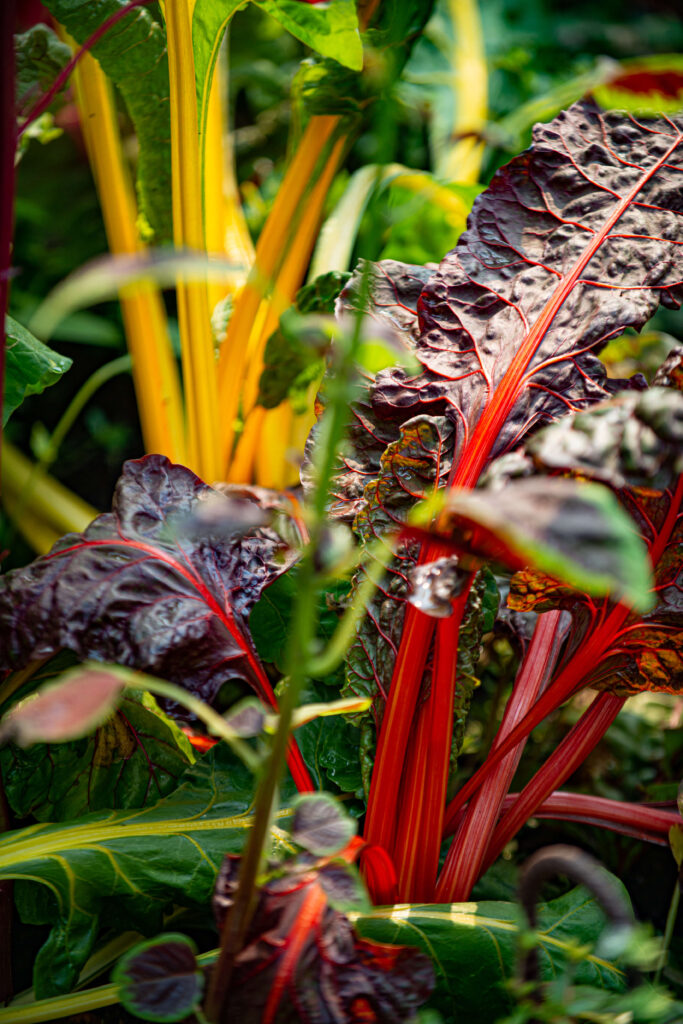 Stroll through the neatly packed plots at Rinconada and you’ll find pumpkins, wine grapes, native flowers and even a seedling experimenter named Liz who uses her plot as an incubator for her gardening business, The Seed Shrine. Or, if in need of advice, flag down Sharon Erickson, a Master Gardener who helps run the Water Wise Garden, which neighbors Eleanor Pardee. She often leads Saturday classes ranging from saving seeds to better composting.

The produce from each plot may differ; however, the gardeners are united in their passion for growing things, their commitment to creating a healthier community and a shared disdain for the squirrels that make off with their veggies in the middle of the night. 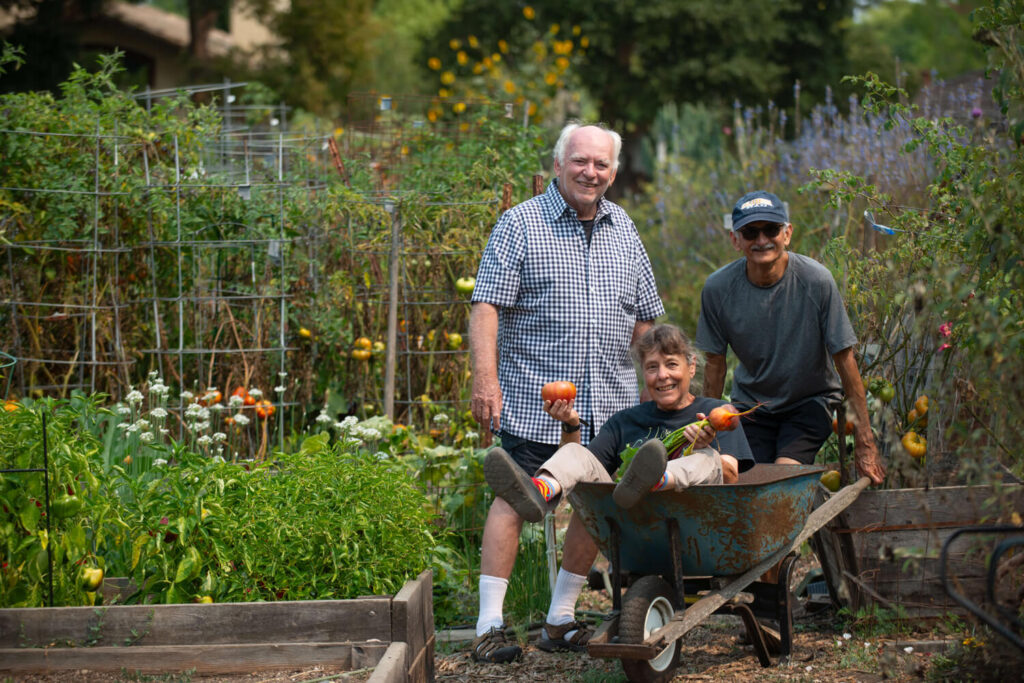 The Eleanor Pardee Garden (1201 Channing Avenue) started in 1979 and has 92 plots. Penny Proctor is the volunteer liaison for the garden and remembers when the area was a vacant lot created when the conjoined Eleanor Pardee Park was established.

Her mother, Helen Norman Proctor, was the park project’s landscape architect who later started a plot in 1983. Penny recalls how the garden’s first growers attempted to grow corn but were met with a pesky enemy. “One time, my mom drove in and saw six squirrels in the corn patch who fled with corn tucked under their arms!” she says.

Penny started her own plot in 1988 next to her mom’s and has been growing beans, tomatoes and peppers. She said that due to a 1998 flood from the nearby creek, the soil is ideal for gardening.

Helen Norman Proctor was one of the garden’s first liaisons (a volunteer who acts as the nominal leader) and after she passed in 2007, Penny took over and has been steering to a fruitful future. She helped rewrite the garden rules to address various problems such as barring the use of glue traps and adding new fencing.

Of the 77 or so gardeners currently at Eleanor, Penny says that about a third are over the age of 60 and that there are a fair number of families who garden together. One of the youngest green thumbs is a 12-year-old who grows strawberries and herbs. Underscoring the range of Palo Alto neighbors, a bench near the garden’s large bay laurel tree is dedicated to Elsa, who gardened here into her 100s. 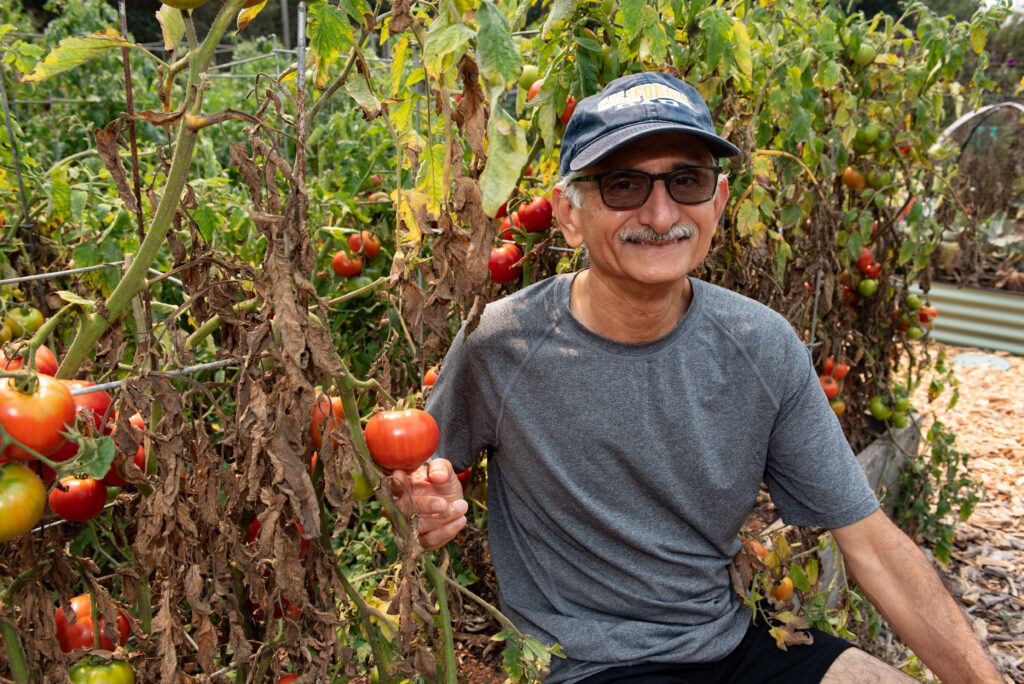 One of the first species to admire in Eswar’s garden is his Amaranthus. Strikingly beautiful with deep red color, they tower above his tomatoes. In the 13 years Eswar has been here, he’s built a wall of vines and installed a sonic device that plays a high-pitched noise to repel any veggie thieves.

A proud father of three, Eswar’s love for his garden is unquestionable. “I told my family that my priorities are: the garden, the compost that feeds my garden and then them,” he jokes. “I was married but it didn’t stop me from getting married to my garden.” 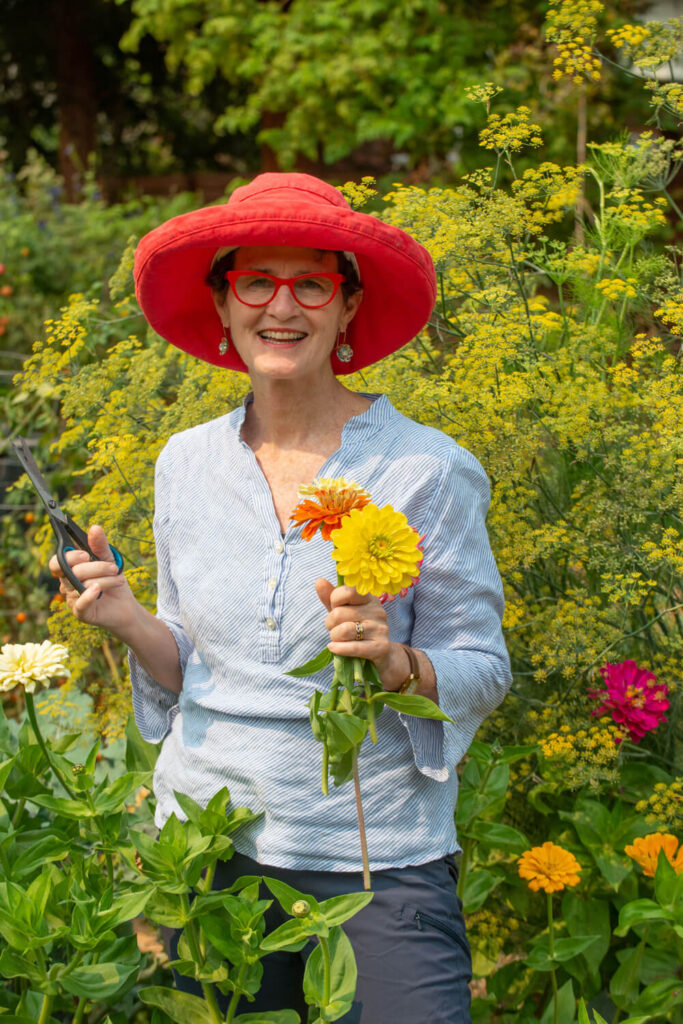 Lisa and her husband John’s house lacks a sunny plot, so when a neighbor tipped them off to the Eleanor Pardee Garden, they added their name to the waitlist. Their patience paid off and they’re some of the newest members of the garden community. “It’s just such a great antidote to isolation and screens,” she says.

They’re spending their first year creating a foundation for their plot and planting kale, basil (which Lisa uses in her walnut pesto), parsley as well as a surprise gift. “There’s a family from Iran who has a plot near ours and this little girl came over to present me with some seedlings,” she says. What grew: cherry tomatoes. 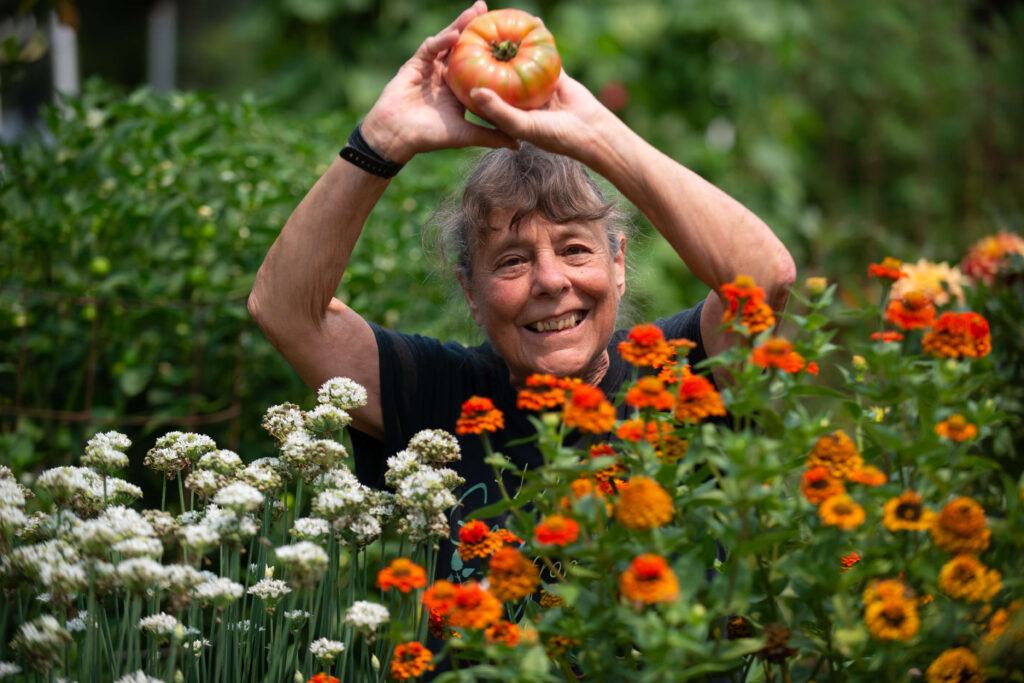 Adorned in a shirt that reads, “I love gardening from my head tomatoes,” Kristina began gardening here 32 years ago. Besides a commitment to tomatoes, she’s growing squash, cucumber, chard and various herbs such as sage and rosemary. Her cardoon thistle blooms in the spring. 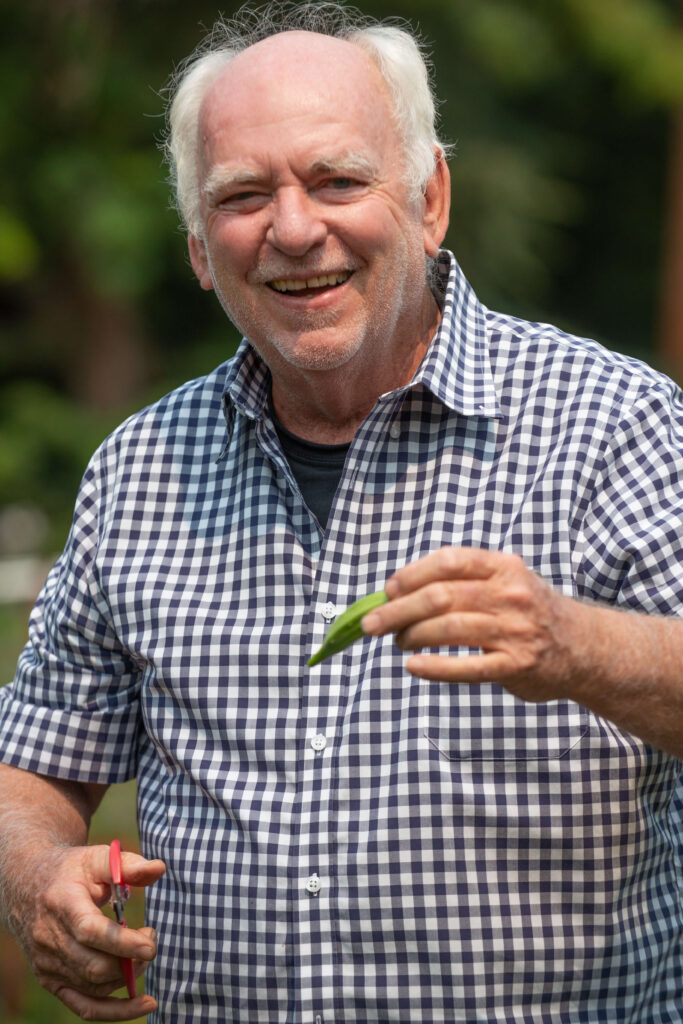 “I always wanted to be a farmer,” Mike says and his dream came true in May 1982. He’s since established himself as the tidiest gardener in the garden whose rows are perfectly aligned and spaced. He grows okra, which he says is a great substitute for a martini olive, and trades beets with Kristina for tomatoes. As one of Pardee’s long-standing gardeners, Mike has seen a whole community grow around him.

“The plot next mine is a woman named Wendy and I’ve seen her get married, have twins who are now taller than all of us and climb Mount Everest and Machu Picchu,” he says. “Last month, I even helped her move furniture.” 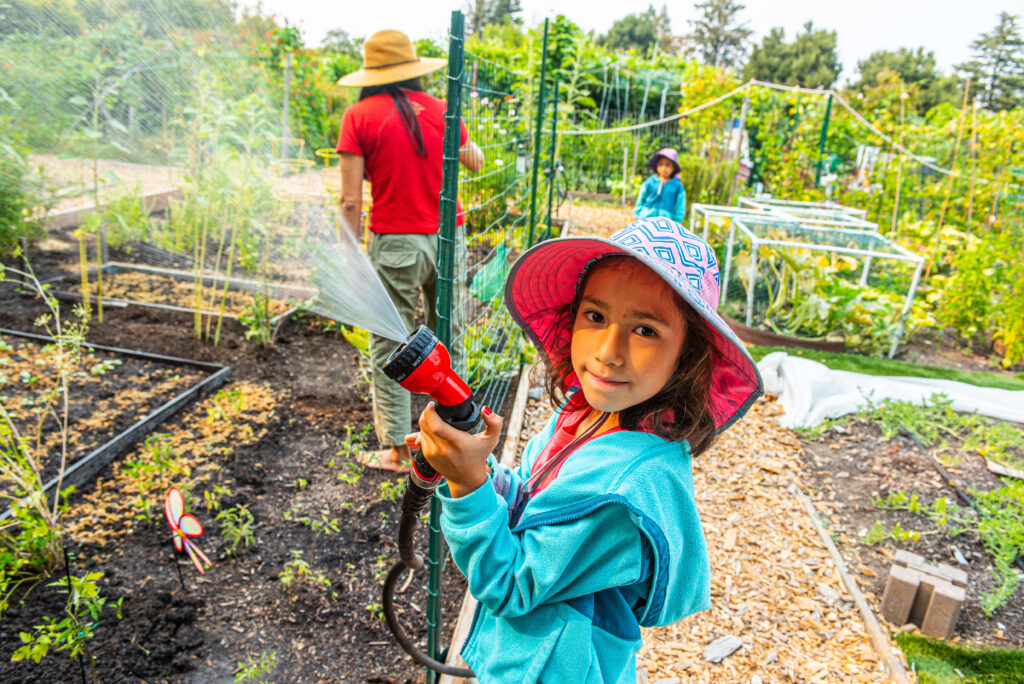 As the oldest community garden, it’s not without its share of lore; the 1998 novel Murder Crops Up by Lora Roberts is a murder mystery that takes place in a garden inspired by Rinconada. The actual Rinconada is much less lethal and instead, a massive project featuring twice as many plots as the Eleanor Pardee Garden.

Annie Carl is the volunteer liaison and Master Gardener who is the point person for anyone who signs up for a plot. She became the liaison in 2015 and has led several initiatives including a program to improve the butterfly population by spreading milkweed. She estimates that she’s propagated over 2,000 milkweed plants that have been planted across the Bay Area to directly benefit butterflies. As Annie toured the garden on a recent afternoon, she lit up when she saw two butterflies mating above a patch of milkweed.

Unlike her neighbors who are growing produce, Christine instead honors California natives. There is goldenrod, buckwheat and salvia, plus a bee box on the fence nearby. In the spring, she nurtures woolly sunflowers and then grows gooseberries in the winter.

“This being California,” she says, “there’s always something in bloom.”

If you visit Doug at his plot in the right season, you won’t leave without a bag full of tomatoes. The father of two is also raising summer squash, zucchinis, red peppers and, per the request of his children, a few pumpkins. 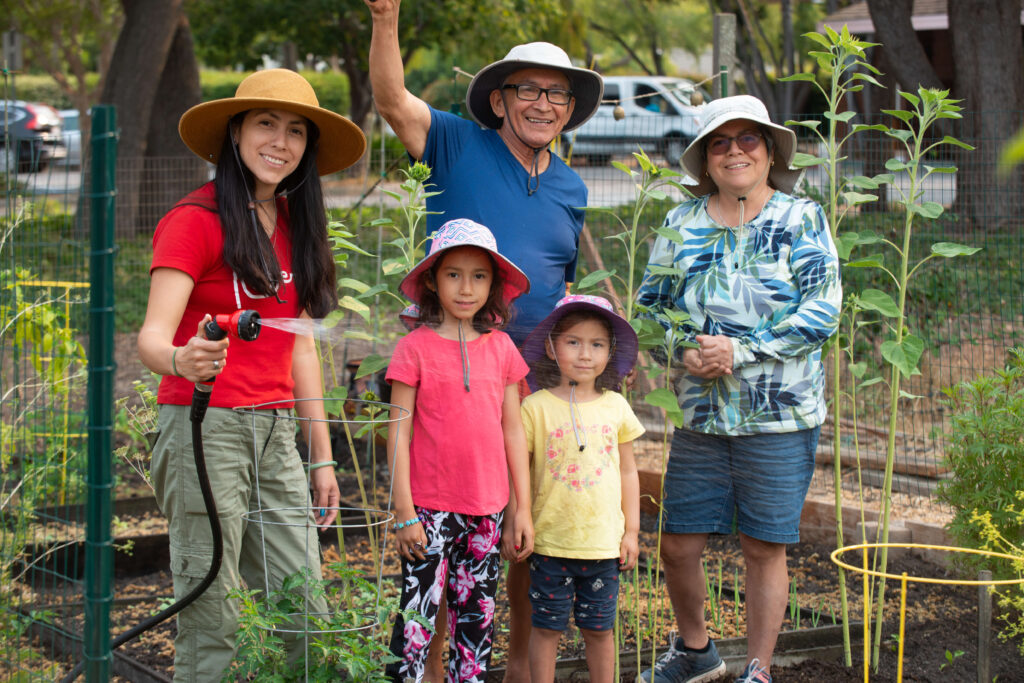 On a recent Friday afternoon, there were three generations of the Siv family working together on the plot. Laurie’s parents were watering and cropping the spinach and cilantro while her two daughters frolicked around the garden. Having started three months ago, Laurie wanted to teach her daughters about Pachamama, or Mother Nature, by having them help grow red peppers and black mint from her native country of Peru.

As one of the newest members of the garden, Laurie is embracing unfamiliar produce (“Indian squash,” she deadpans. “I had never seen anything like that.”) while appreciating her friendly neighbors. “I was new here and everyone helped me,” she says. 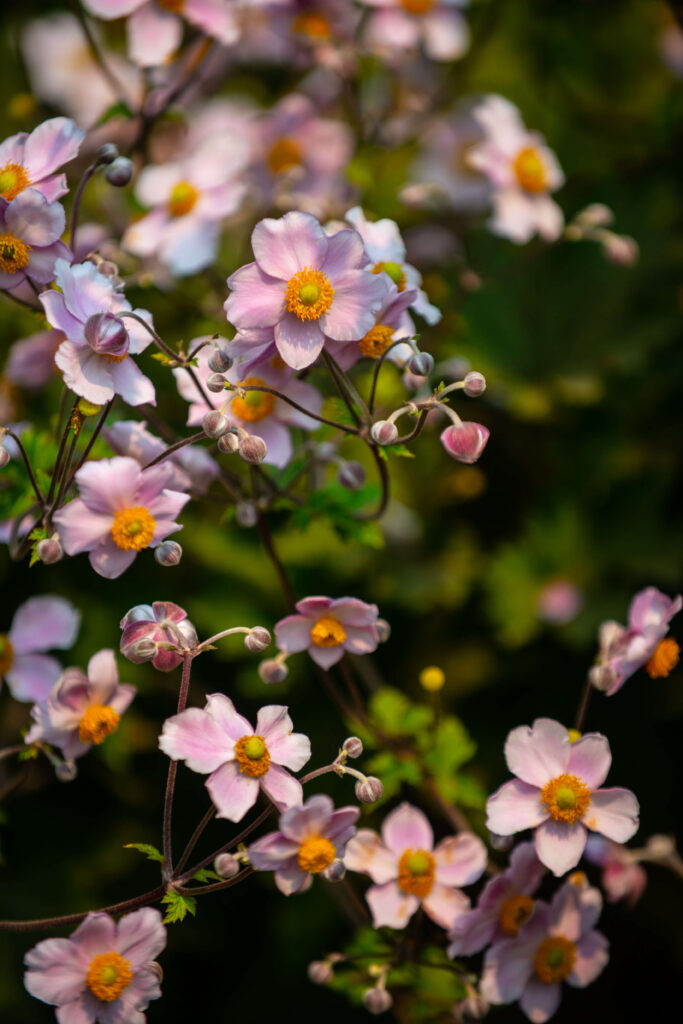