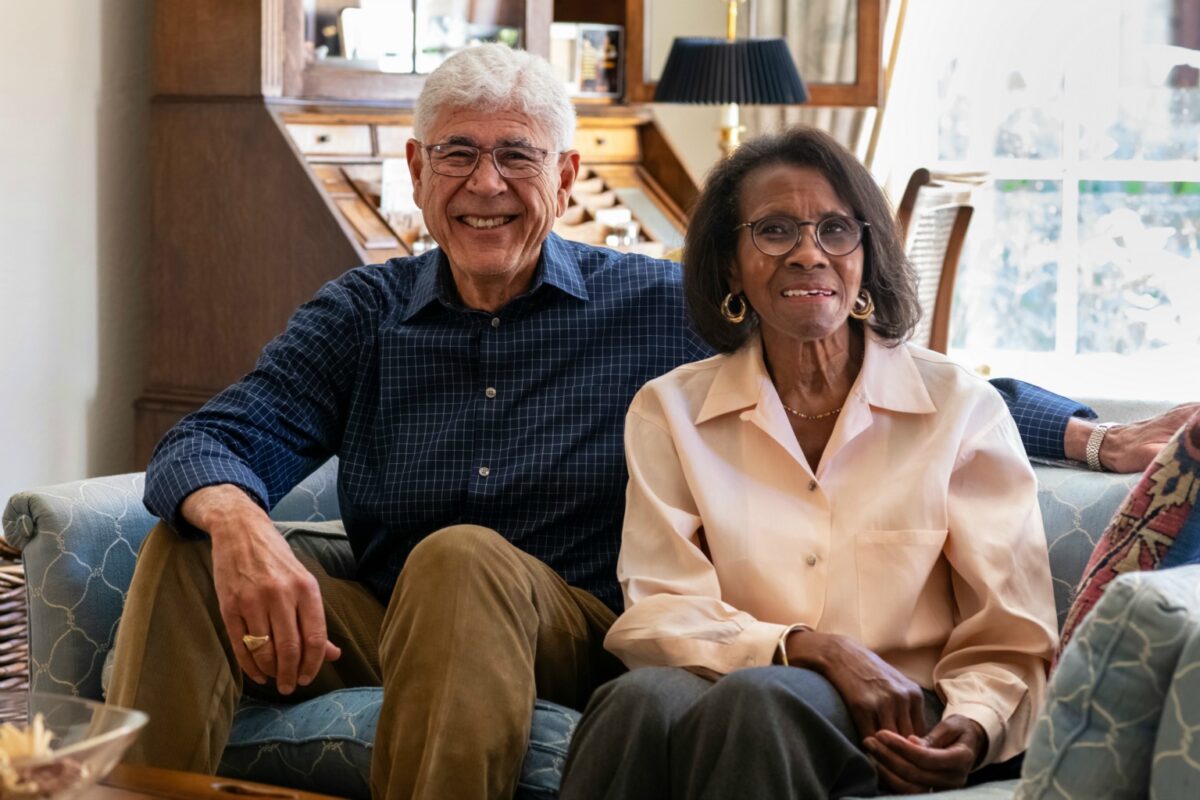 Pulling up to a corner lot in the Green Gables neighborhood in Palo Alto, it’s clear that school just got out for the day. Kids are riding home on their bicycles—chatting away as they pedal, wearing gleeful expressions of liberation. It’s 2019, but except for the tipoff of Brandy Melville apparel and The North Face backpacks, this timeless ritual is the same scene that’s been happening for decades—and even generations here.

Stepping into the house on the corner lot, time slips away again. An antique secretary desk sits in the corner, the shelves lined with a mix of fading black and white and color photos, capturing milestones—weddings, children, graduations, grandchildren—in one family’s life. Married for 55 years, Fred and Imogene Chancellor have lived here in Green Gables for 46 of them.

Imogene (pronounced with a long vowel sound ‘I’ at the start) began her life in a very different place, a world away from the Palo Alto she knows as home. Born in West Virginia, she was a coal miner’s daughter, growing up in the segregated South. “My two very best friends were two white girls,” she remembers. “Their dad was a coal miner, and my dad was a coal miner. When we played together, we never had any difficulty. But when we went to the movies, I was required to go to the balcony, and they were required to sit downstairs.”

From an early age, Imogene set a goal of going to college—and knew her exact path. “When I was very young, I told my mama, as I called her, and my daddy, that I wanted to become a nurse.” With her parents’ encouragement and support, she went to nursing school in West Virginia, which led her to Ohio State University Hospital, where she became head nurse of the preemie nursery and met her husband, Fred. In 1972, Fred was offered a position as director of personnel with the Mountain View-Los Altos High School District, and as Imogene puts it, “We came here and I’ve never looked back.”

After settling into their Palo Alto home with children in tow (Marland and Brian, two years apart, and then later, Stephanie, nine years younger), Imogene didn’t immediately go back to work. Actively involved in Junior League, the First Congregational Church of Palo Alto and Foothills Tennis & Swimming Club, Imogene’s social connections broadened—bringing her into contact with Sam Webster, a Palo Alto businessman and community booster, considered a local icon. “After having known him for about six months, he said, ‘I think you would make a terrific realtor. You need to come in and speak with me,’” recalls Imogene. Three years later, when Stephanie turned four, she called Sam to say, “I have my license.” What followed was a 30-plus-year career in local real estate—where she was considered a bit of a pioneer. “Interestingly enough, I don’t recall ever meeting anybody who was taken aback by the fact that I was a black woman, and most of my clients have become my friends,” Imogene says. Imogene also helped initiate the first wave in another trend, when the next generation, her middle son, Brian, joined her in 1994 to become a mother and son team.

Sitting together at Imogene’s kitchen table, Brian, now 50, remembers doing homework here, listening to his mother on the phone. “The landline used to be on that wall over there,” he says, pointing across the room. “My mother would conduct a lot of business here in the kitchen and I remember hearing her conversations and asking a lot of questions.”

Like his mother before him, Brian grew up knowing exactly what he wanted to do. “I joke with people that I’m kind of a real estate brat, borrowing from military terminology,” he says. After graduating from UCSD with a business degree and turning down an opportunity in Dallas, Texas, he returned to his hometown of Palo Alto. “Just like my mom, I was very gregarious. I would have been miserable sitting behind a desk in an office,” says Brian, reflecting on his decision to partner with Imogene. “My mom always gave me the room to grow and to be myself, which was huge.”

Like every other family, the Chancellors haven’t been immune to challenges—tragedy struck in 2000, when they lost Stephanie to lymphoma. In recent years, Imogene has faced her own battle with multiple sclerosis. “She has always been the one to help and it took a little getting used to for her to be the one needing some assistance,” Brian says. “She has been extremely resilient and has never complained or felt sorry for herself.”

Brian met his Danish wife, Nana, in Palo Alto and they live in Crescent Park, less than a mile from his parents, with their sons, who are now 15 and 12. The three generations remain close in every way, with Imogene and Fred keeping busy in retirement and Brian forging his own path with the boutique real estate brokerage Sereno Group Palo Alto. A common theme throughout the family is volunteerism—which Imogene started in her Junior League days and continues to be modeled by Brian and Nana. “It’s important to give back to the community,” Imogene says. “That was something my parents did in our community and my kids have done the same thing in their adult lives.”

Brian acknowledges that his mother’s childhood stories—and the gulf between their upbringings—are a constant inspiration, especially as he watches his own children grow up.

“It’s fun to see my kids in the same places, playing on the same basketball courts and the same baseball fields,” Brian says. “We’re just so lucky to have the diversity, not just of ethnicity, but of thought and of endless opportunities and access, but we always have to remember that there are other people whose lives aren’t like this.”