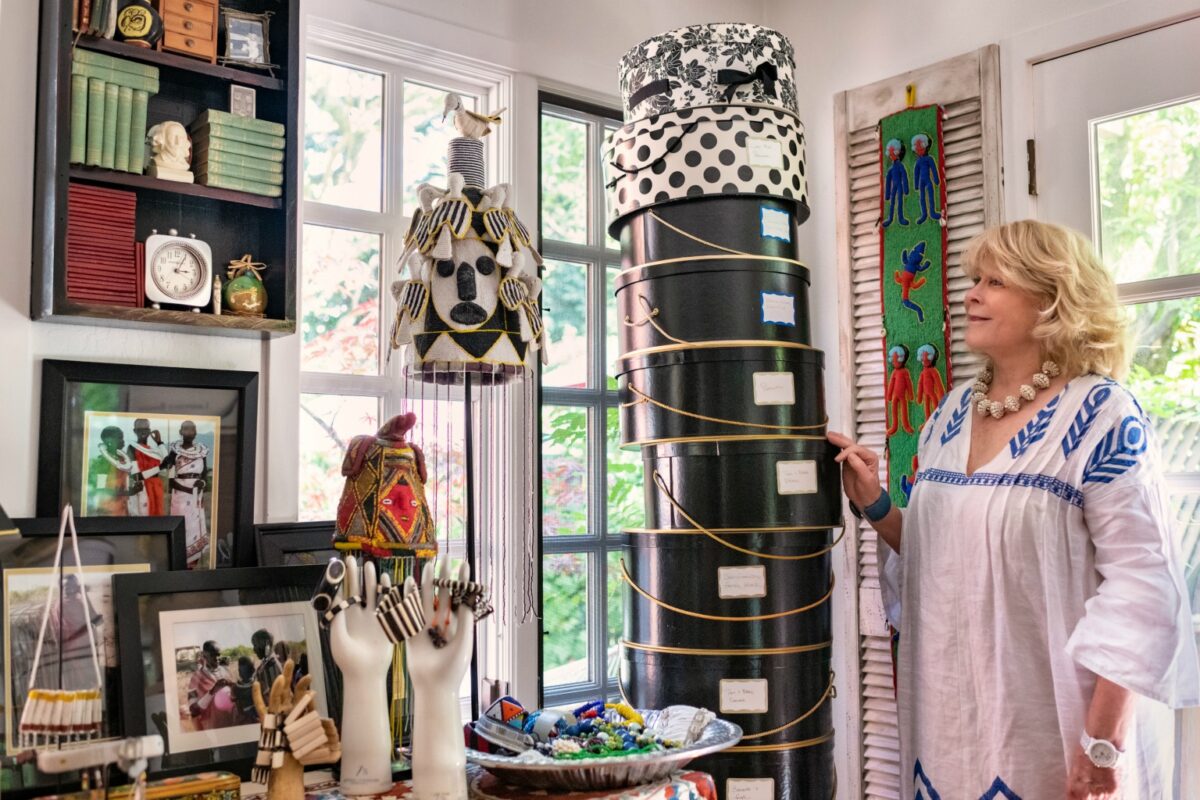 When Gwen Books was in the eighth grade, what she wanted more than anything for her birthday was a suitcase.

Growing up northwest of Los Angeles in Ojai, with a population half the size of Stanford University’s student body, Gwen was eager to explore beyond the surrounding Topatopa Mountains. Ojai had its limitations, but it was also home to the Dada ceramic artist Beatrice Wood who, for Gwen, personified a world waiting to be discovered.

“She had bangles on her arms and wore gypsy clothes,” Gwen remembers. “I would see her and think, ‘There’s another world out there—and I’m going to find it with my blue leather suitcase.’”

Gwen’s home today is in Atherton, where each room of her charming single-story abode is cluttered with memories from decades of international jaunts. She’s turned travel into her business by devising elaborate, soul-nurturing and often extravagant vacations for the Peninsula’s adventurous travelers and her home reflects the people she’s met and the impressions she’s gathered while abroad.

The walls in Gwen’s kitchen are adorned with framed menus from faraway restaurants in Marrakech and Buenos Aires while painted artwork from Cuban and Kenyan artists bring color into her office. An African spear is part of the living room’s décor and a painting from deceased Stanford professor and artist Nathan Oliveira is the centerpiece of her bedroom, rooting her home back on the Peninsula.

A good portion of Gwen’s year is spent abroad—she was gone for over four months last year—so when she’s here, she prefers to spend her time in “garden therapy,” an experience you cannot stow in a suitcase.

Gwen’s garden was flourishing during a recent afternoon with the fragrance of white roses wafting about the tightly manicured hedges. A self-described “Francophile,” it appears as though Gwen has managed to reproduce a piece of the perfectly-manicured Jardins du Château de Versailles in her front yard.

Akin to how she’s decorated her home, Gwen’s outfit mirrors cultures of the world; her airy blue dress is from Greece, with a bracelet from London and a diamond-dotted necklace from India. She speaks warmly and with an informed candor, often decorating a conversation with references to artists and literature. Her nightstand is loaded with magazines (she subscribes to 20 along with numerous newsletters and blogs) alongside a copy of The Paris Architect by Charles Belfoure and a biography on Junipero Serra. Prior to any trip, Gwen will assign herself as well as her clients a booklist on the places they will go: a few guide books, several titles of related literature and even films and music to begin encouraging the traveler to embrace the foreign mores.

“I find that with most cultures, the more you try to engage with them, the more it broadens the horizon,” she explains. “I get my clients to learn ten words of a local language. That lets people know that you appreciate their culture and city. The more you engage, the more it puts people at ease.”

Since establishing her business, Lifestyle Management, in 2004, Gwen has accumulated 45 families or individual clients. Most of them have been with her since the beginning and rely on her deep relationships around the world for a dream-come-true vacation experience. She’s been referred to as “Silicon Valley’s best-kept secret” due to her ability to satisfy wishes from afar. Gwen’s high caliber of personal and dazzling recommendations comes across as an HBO-quality version of Rick Steves’ Europe.

Perusing the reviews on her website yields praise from the likes of Reed Hastings and Susan and Joel Hyatt, who trumpet her ability to wield a traveler’s magic wand. Find yourself in Japan with the desire to dine with a geisha? Gwen will find one by breakfast. Or if the crowds surrounding the Shchukin Collection at the Louis Vuitton Foundation in Paris are overbearing, she can orchestrate a three-hour private viewing.

“I don’t like being told ‘no’ and ‘no’ is not in my vocabulary. If there’s a need, one can determine the desired outcome,” she says. “Maybe it comes from my Catholic dogma where everybody told me ‘no’ all the time.”

To simply describe Gwen as a posh travel agent would undermine her impressive feat in establishing business contacts in nearly every corner of the world—at least any region where a traveler of means would wish to go—and ensuring standards are met. Before greenlighting a yacht for a client’s trip, for instance, she’ll assess the ship down to the napkin choice. Furthermore, she successfully scouts and vets what she calls her “land ambassadors,” guides on the ground who reflect Gwen’s expectation for quality concierge service. If a bag is lost on the flight over, her ambassador will swiftly have underwear and socks waiting for the traveler at the hotel.

Museum directors, restaurant owners and hotel managers expect Gwen to send them clientele of a certain cachet but she describes her clients as equally wide-eyed and receptive as any other traveler.

“They’re all very curious and open to new experiences. They trust me; even if something sounds odd they’ll do it. And they’re really not demanding,” she says. “Although we don’t discuss budgets, I don’t think there’s value in throwing money at an experience. Luxury today is having free time.” Every trip with Gwen, after a consultant fee, begins with a personal conversation followed by an eight-page questionnaire that’s crucial for her to begin envisioning the dimensions of the trip. These questions gauge the client’s interests from history to art to wildlife but as Gwen quips, “It comes down to, do you want a male or female masseuse?” She uses the provided information to devise a unique and specialized trip, one that flows with a gradual narrative.

“I try to think of a trip as a three-act play,” she says. “If you spread two weeks out, the beginning of the trip better have a wow factor that builds up to a climactic end.”

When it’s Gwen’s turn to travel, she’ll choose Thimphu over Paris. She just joined a last-minute excursion with Lindblad-National Geographic to visit Tahiti and the Marquesas Islands and fell in love with Bhutan this past year.

“At this point in my travels, I’m interested in more raw places,” she says. “That’s my agenda right now; if there are cannibals, I’m going.”