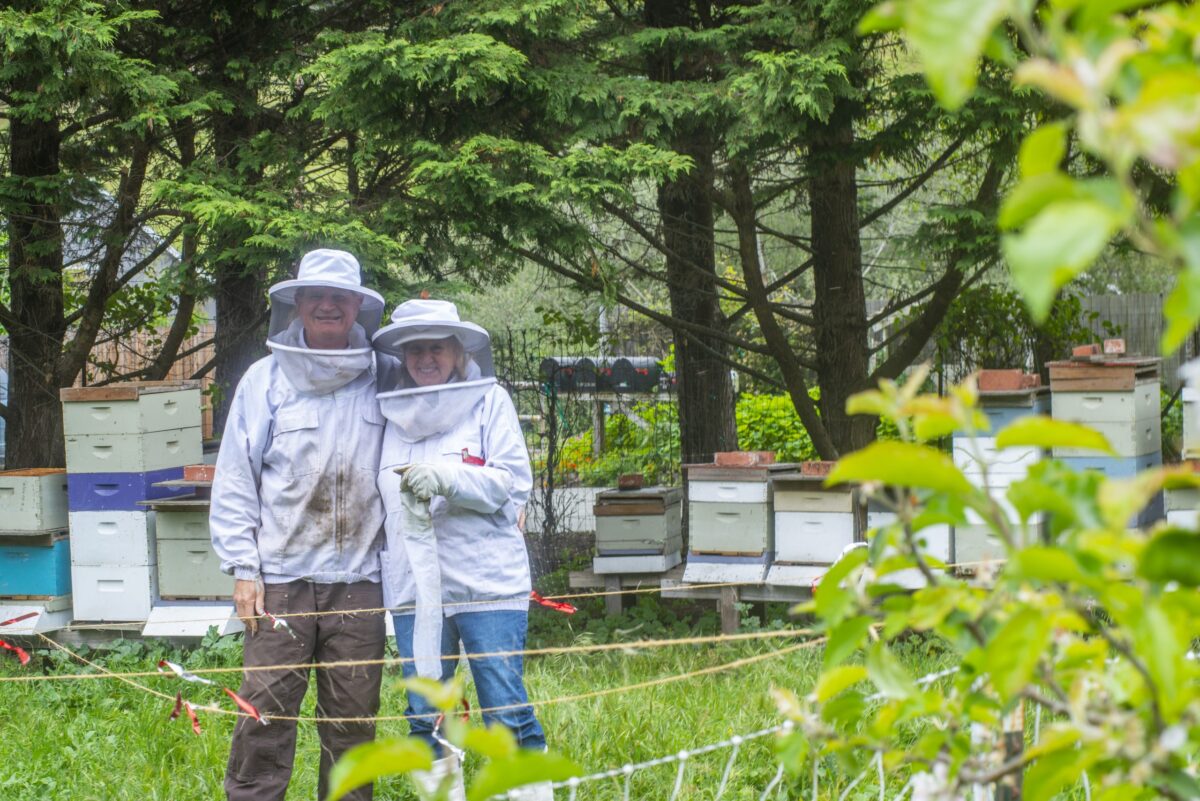 Lest there be any confusion about the hive hierarchy at Half Moon Honey, Gary Butler quickly sets the record straight. “Teri’s the queen bee,” he says, referring to his wife. “I’m just the worker bee.”

So it’s Teri who provides the back story on how the couple became busy beekeepers with a buzzing business. Back when he was nine, Gary met a mentor and that’s when the bee adventures began. Despite the occasional sting, his growing expertise quickly paid off. “He got to miss school,” is how Teri summarizes younger Gary’s source of glee. “When there was a swarm in town, the police would come to school and call him out of class.”

Clearly wired for thrill-seeking, Gary went on to become a national champion kick boxer, owner of pet tigers and barefoot water skier. But, after a series of concussions, he realized that his days of barefooting were numbered. “Falling on water while skiing is like falling on concrete,” relates Teri. “He finally had to call it quits.” Naturally, Gary had to find something to replace barefooting. A happy childhood memory gave him a buzz.

In 2008, Gary and Teri started Half Moon Honey with two packages and a hive kit. Teri didn’t take much convincing—she was happy for a hobby they could work on together. After their respective day jobs wrap up, they focus on the bees. Nights, weekends and vacations are dedicated to beekeeping activities, including checking hives, bottling honey and traveling—most recently Cuba—to glean additional knowledge and tips. 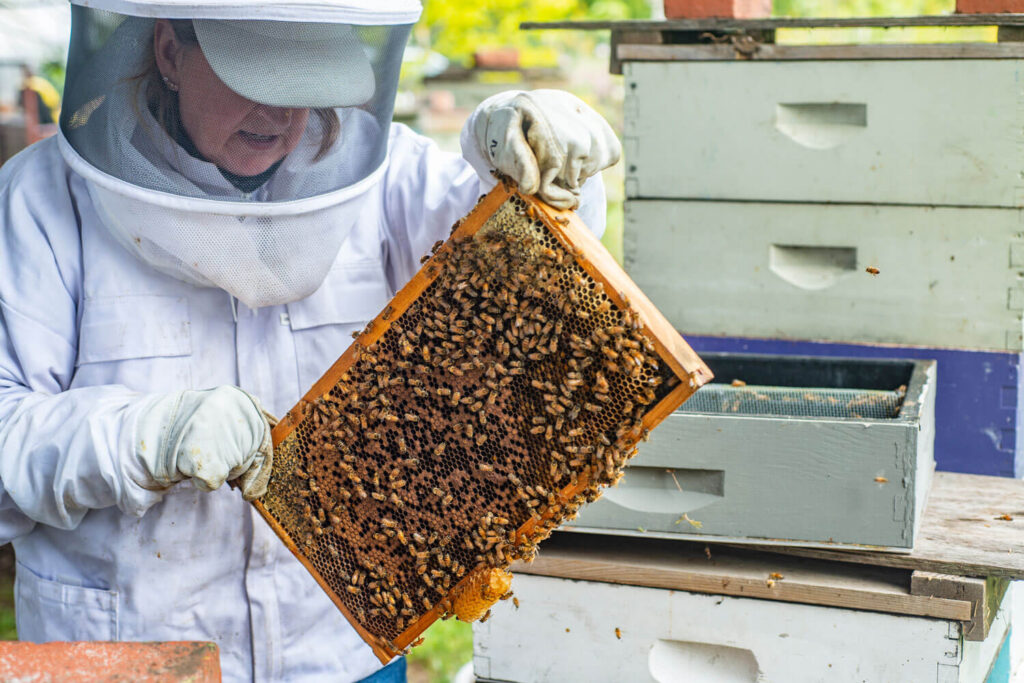 Since the original two hives, Teri and Gary now have 300 to 400 hives during peak season, located in Pescadero, Half Moon Bay, along the coast and up in the hills. With 50,000 bees (making up to 50 pounds of honey) per hive, that’s a total of over 15 million bees. Those same calculations also mean a heck of a lot of stingers. “You have to stay mellow,” Teri says. “You can’t go crazy if a bee gets stuck under your veil.”

Getting stung is inevitable, so you clearly have to have a positive attitude as well. “I look at it like free ‘beetox,’” Teri jokes. “When I get stung in the face, it blows up so I don’t have any visible wrinkles.” She also points out other, more obvious, upsides. “Seeing a healthy hive work together is incredibly rewarding,” she says. “Plus, it doesn’t hurt that I love honey—it’s an amazing product with so many uses. People even used honey during the Civil War for treating wounds.”

While honey evokes a single image, there are countless types. “Honey is like wine with different color, taste and viscosity,” Teri explains. With the taste heavily influenced by what nectar the bees forage, the Butlers’ honey is a meritage of flavors, including local wildflowers, dandelions and eucalyptus. Half Moon Honey ‘flights’ include an amber honey, “Born to be Wild,” a dark harvest, “Dark Side of the Moon” and a eucalyptus honey, “Build Me Up Buttercup.” Peer into a jar of “Born to be Wild,” and you’ll be struck by the golden hue that shifts in different lights. Dab the honey with your finger, and the texture reveals a buttery feel. Sniff, and the scent is of citrus and floral.

“Honey—I just love it on everything!” Teri rhapsodizes. “Honey toast with fresh blueberries is the bomb. On oatmeal, with chicken, in tea—it’s the perfect food for me.” Teri and Gary aren’t the only fans. At the San Mateo County Fair, five out of the last six years, Half Moon Honey won Best in Show. 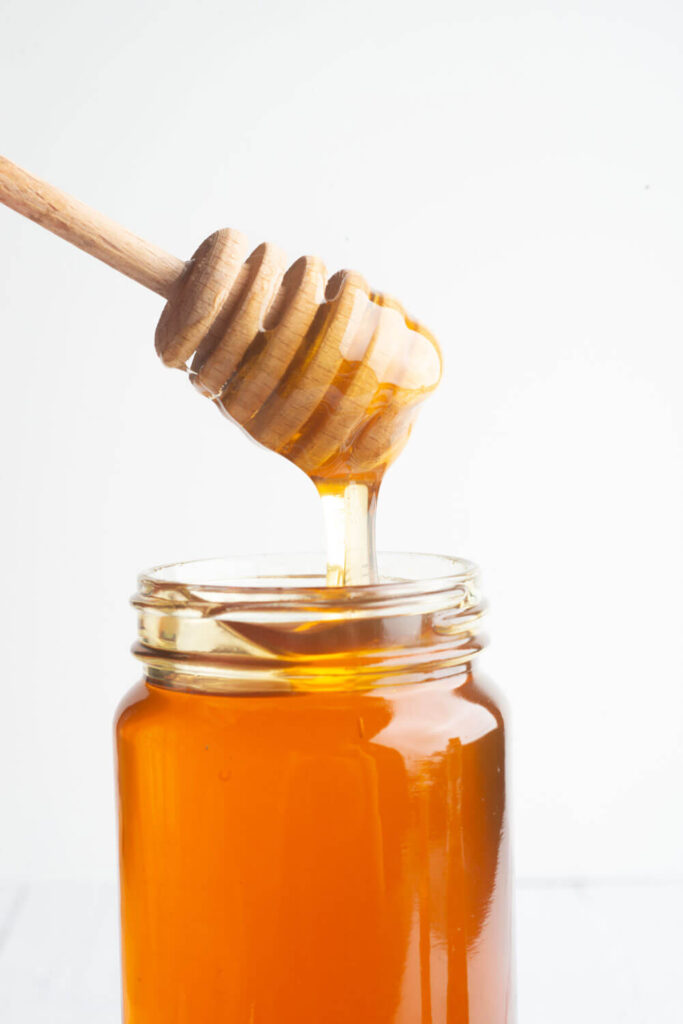 Half Moon Honey products can be purchased at the Coastside Farmers Market in Half Moon Bay. You can also find the brand at shops, restaurants and wineries around Half Moon Bay, including Sam’s Chowder House, Nebbia Winery and Urban Sanctuary. In addition to shipping out phone and email orders, the Butlers also keep Half Moon Honey followers in the loop through updates on their Facebook page.

The Butlers say that beekeeping is a lifelong adventure in discovery—and they love sharing insights from their bountiful bee background. Before even opening a hive, you can learn a lot. On a pleasant, warm day, you should see moderate activity going in and out. “Older girls are coming back from foraging with fat pollen baskets on their legs,” explains Teri. “We have sometimes seen four different colors of pollen going into the same hive—white, yellow, orange and bright red.” Look carefully, and you can observe guard bees in position, and younger bees taking their first flights. If everything seems in order, the top box can be opened. “Give them a puff of light smoke,” advises Teri, “and they will retreat into the hive so you can check the frames for brood, honey, and if they need more open frames or another box.”

As for advice to wannabe beekeepers? Get training. Teri and Gary recommend joining a local bee club. “Everyone says the two-year beekeeper knows the most,” Teri wryly observes. “After that, you realize just how much you don’t know. You always need to be growing.” The Butlers belong to the San Mateo Bee Guild, which provides information sharing, tips and resources and mentoring of beginning beekeepers. 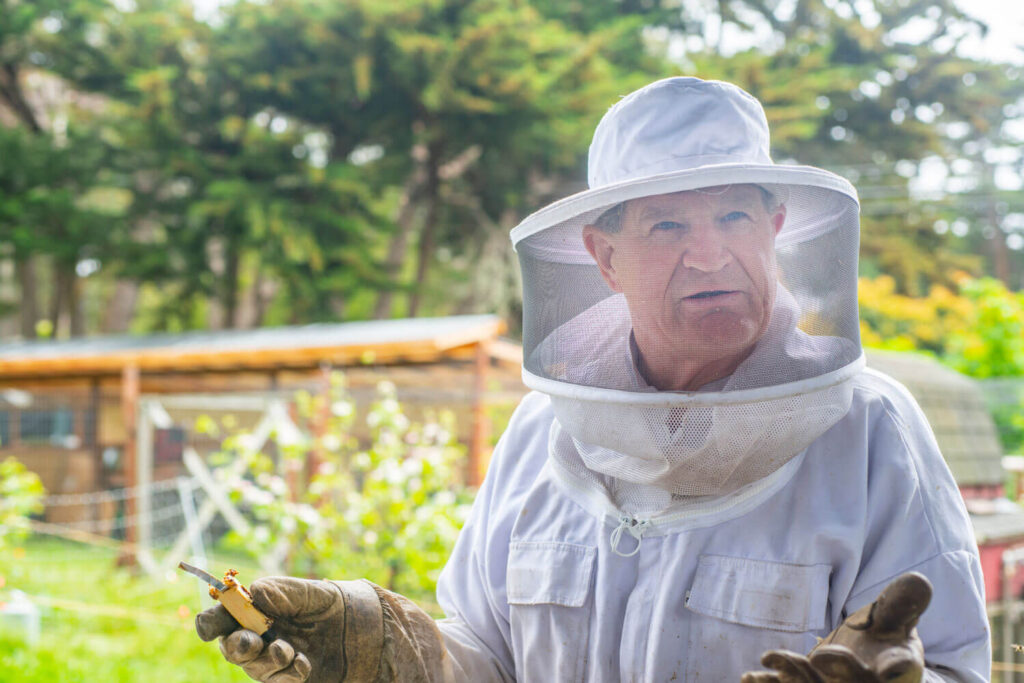 Even as Gary and Teri each wear their own beekeeping hats (or veils), they find the actual hive duties endlessly fascinating. As Gary first learned from his childhood mentor, there are three types of honeybees: the queen, workers and drones. “The bees have a borg mentality,” Teri notes. “They do what is right for the hive, not necessarily what is right for any one bee.”

Courtesy of the Butlers, here’s a quick refresher: Each hive has one queen who lays approximately 2,000 eggs per day. All worker bees are female and usually live for about six weeks. They do a variety of jobs, including cleaning, feeding the young and defending the hive—with their final two weeks dedicated to foraging. The sole purpose of the male drone is to spread the genetics of the colony by mating with a virgin queen from another colony. If he’s able to mate, he dies a “successful” bee. Unsuccessful drones return to the hive, where they eventually become a drain on resources. “The sisters are mean to their brothers,” observes Teri. “They kick their brothers out of the hive once swarm season is over.”

The Butlers work to dispel misconceptions about bees, saying they suffer from a case of mistaken identity. “Bees get a lot of bad press. This is mainly because of the yellow jacket, which often gets mistaken for a honeybee, yet is, in fact, a wasp,” Teri points out. “Yellow jackets are carnivorous and will go after that meaty sandwich or sweet drink; they can be aggressive and sting as well as bite. Honeybees aren’t usually interested in you,” she says. Or as she phrases it, “Bee and let live, so to speak.”

Teri and Gary encourage the Peninsula community to support local beekeepers—starting with calling a local beekeeper or bee club if you see a swarm. “Eat honey from local sources, don’t use pesticides and plant bee-friendly vegetation,” Teri adds. What does Gary suggest? “Let your lawn have clover and dandelions,” he says. “Go a little wild.”