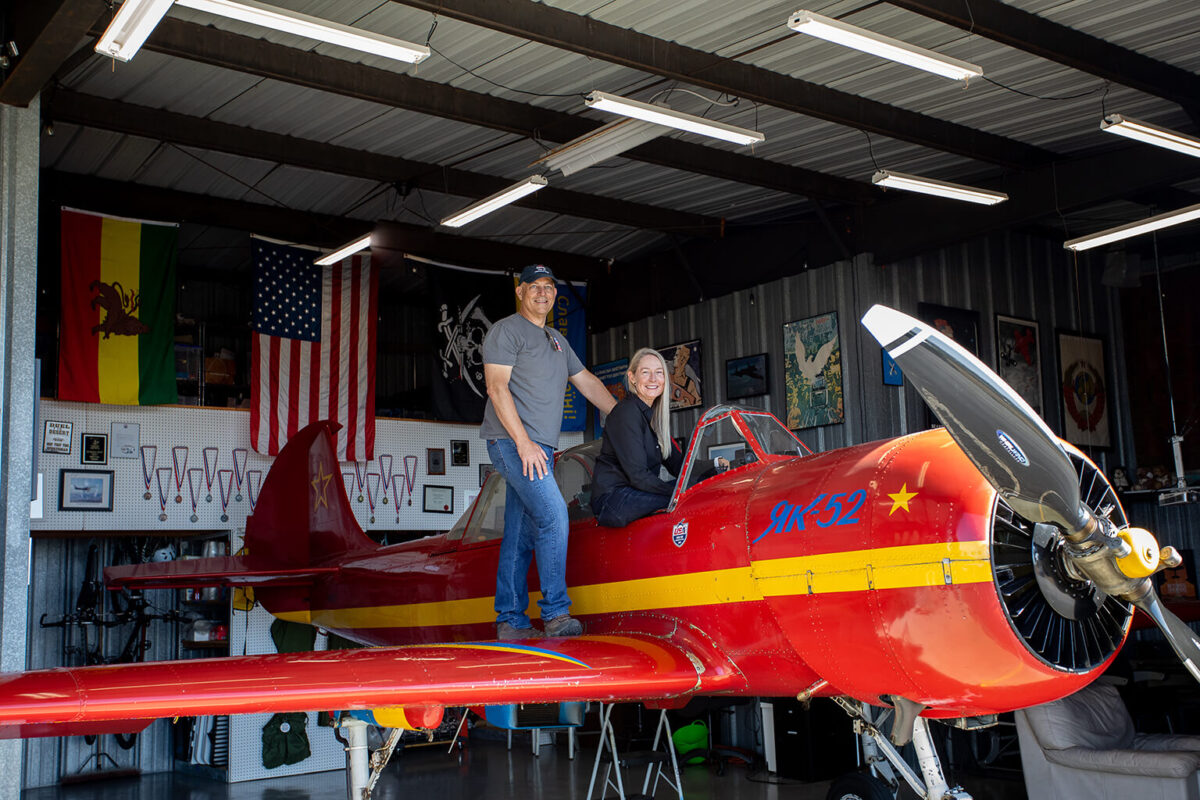 After being set up by their sisters, Marian Harris and Ross Ferguson found their relationship taking off in unexpected directions—not just ups and downs, but also in dives, loops and rolls.

Now a married couple, the Half Moon Bay pair represent the U.S. in international aerobatics competition, essentially the equivalent of Olympic figure skating in the sky. And yes, their love of flying played a defining role in their courtship.

When they first met in late 2011, Marian admits to being intrigued, but her interest skyrocketed when Ross started talking about a Cessna 150. “I was sitting there going, ‘What? You’re what? You can do what?’” she recounts. “And I thought, ‘Oh, you’re more useful now! Maybe I won’t kick you to the curb.’” Marian laughs as she recollects what passed through her mind next: “Or, hopefully, you won’t kick me to the curb!” 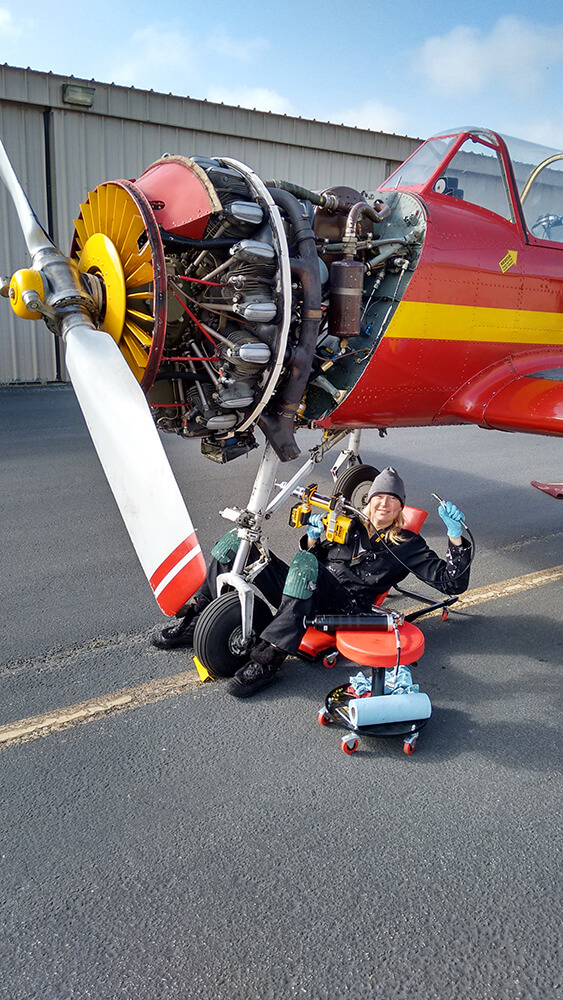 Obsessed with flying since childhood (her father had his private pilot’s license), Marian grew up around planes. She enlisted in the Air Force ROTC in college, hoping it would lead to an aviation career, but the timing was off for open pilot slots so she charted a different course. In 2000, a job with SAP brought her to Palo Alto and more than a decade passed. Then her ears perked up while out on a date with Ross.

Meanwhile, Ross grew up in Seattle in the shadow of Boeing but didn’t know anyone who flew. As a teenager, he spotted a $25 intro flight lesson sign and decided to check it out. “I got hooked and kept coming back for lessons whenever I could afford it,” he remembers. A seasoned commerical pilot by the time he met Marian, Ross reactivated his flight instructor ratings and taught her how to fly. And when Marian took her first solo flight in January 2013, their partnership began to soar to new heights.

As it turns out, both Marian and Ross had always been captivated by aerobatic flight. But even for Ross, it was an idea that never got off the ground. “I just always thought, ‘Well, I could buy one of these aerobatic planes but who would go out and do it with me?’” he relates. “I’d just be doing it by myself—it’d be a solitary hobby.” 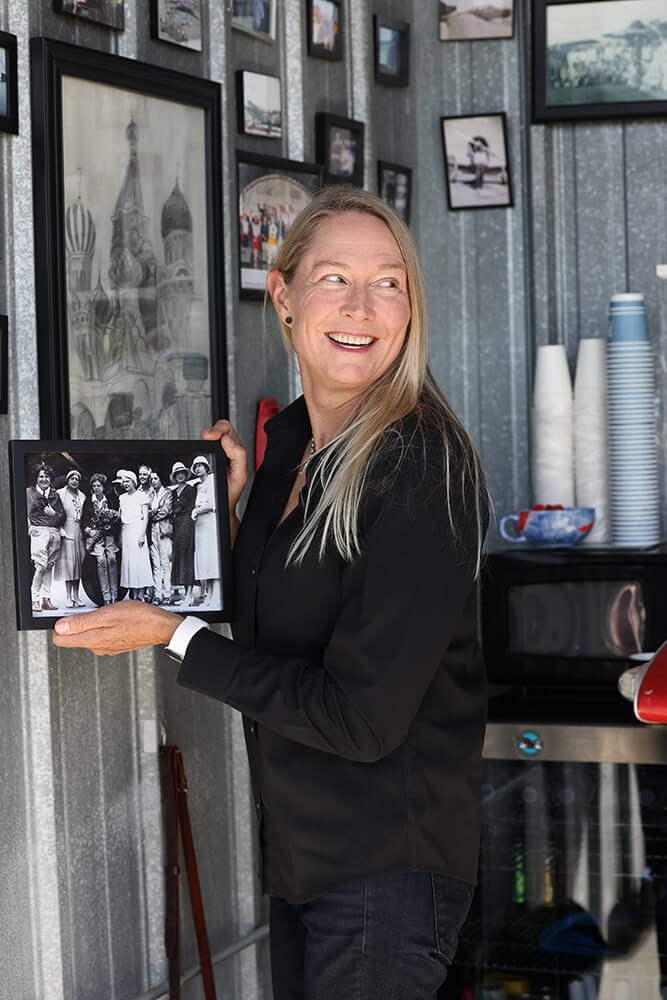 But that thinking changed when he met Marian and learned about the Yak 52.

Built by the Soviets as a military trainer during the Cold War, the Yak 52 was designed to handle extreme aerobatic and combat maneuvers. About 1,800 were constructed, and after the fall of the Soviet Union, most ended up getting exported to the West. After learning that these agile, well-engineered aircraft were actually affordable, Marian and Ross each bought one and housed them in a hangar at Half Moon Bay Airport. “We were spending more time out here than over on the other side of the hill,” she shares, “so when there was an opportunity to move close to Half Moon Bay Airport, we jumped on it.”

Catching sight of a fellow pilot practicing, Marian and Ross step outside the hangar to follow the action unfolding in the sky. “He’s probably pulling around six or seven Gs, which means six or seven times the force of gravity,” Ross observes as he launches into the piloting equivalent of a play by play. “Everything starts and ends from level,” he explains. “This one is called a Humpty Bump. It’s just straight up and then straight down. When he comes out, we’ll see what he does next.” As Ross tracks the plane with his finger, the pilot takes his aircraft vertical and does a one and three-quarter roll. “And this is a Hammerhead, which is just a rotation at zero air speed,” Ross continues, “and then a snap roll on the way back down.” 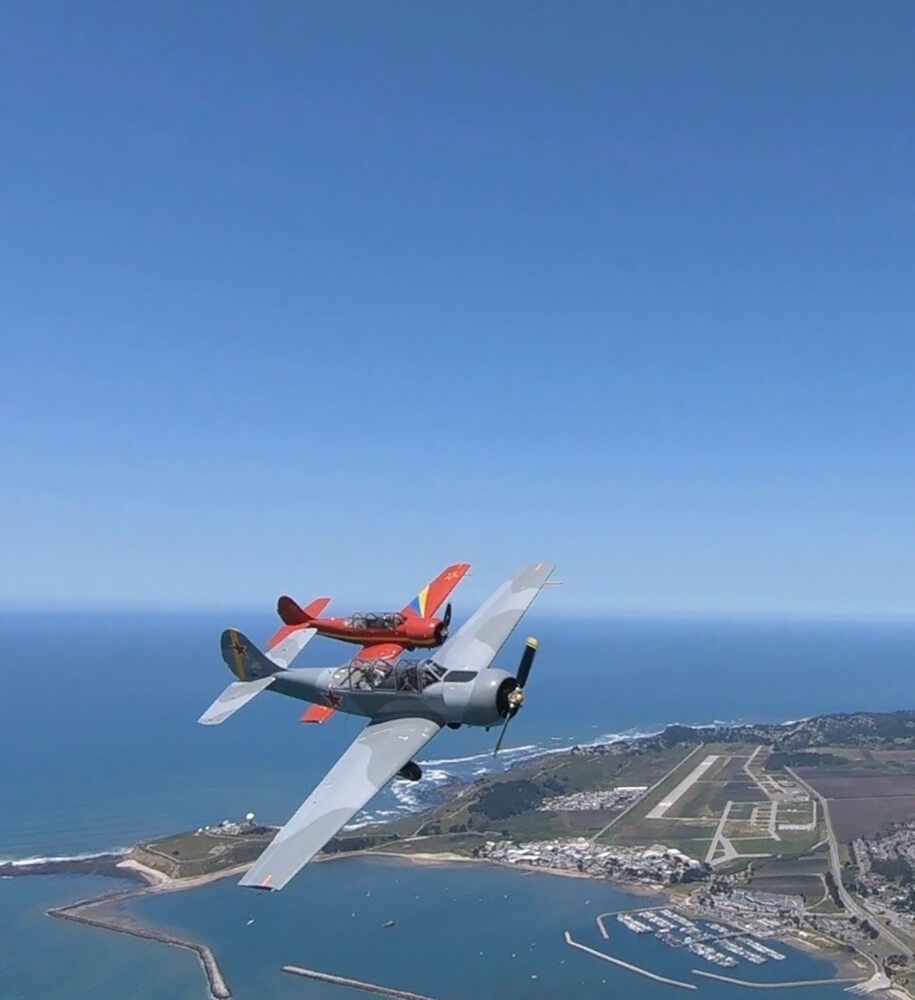 Watching the aircraft seemingly hurtle to the ground, a question naturally erupts: “That looks terrifying! What does it feel like?” Without a beat, Marian and Ross respond in unison: “FUN!” Still, Ross acknowledges that about 80% of pilots get airsick the first time. “It’s uncomfortable at first and then you build up to it,” he says.

After they learned entry-level aerobatics, a friend and fellow Yak 52 pilot encouraged them to get more serious. “You’ve got the airplane, why don’t you go to the Yak 52 World Championship?,” he suggested and connected them with a highly-regarded coach from Kazakhstan for competitive solo aerobatics training.

Given that the Yak 52 design was “frozen” early on, all of the aircraft are virtually identical, making it a perfect candidate for a one-design competition. “It really levels the playing field,” notes Ross, who explains that competitors typically “arrive and drive” aircraft assigned to them versus having to ship their own aircraft to contests. “It basically takes the cost of owning the latest airplane out of the equation,” he says. The first Yak 52 World Aerobatic Championship (informally referred to as the YAK WAC) was held in 2008 and is hosted every two to three years by a different country. 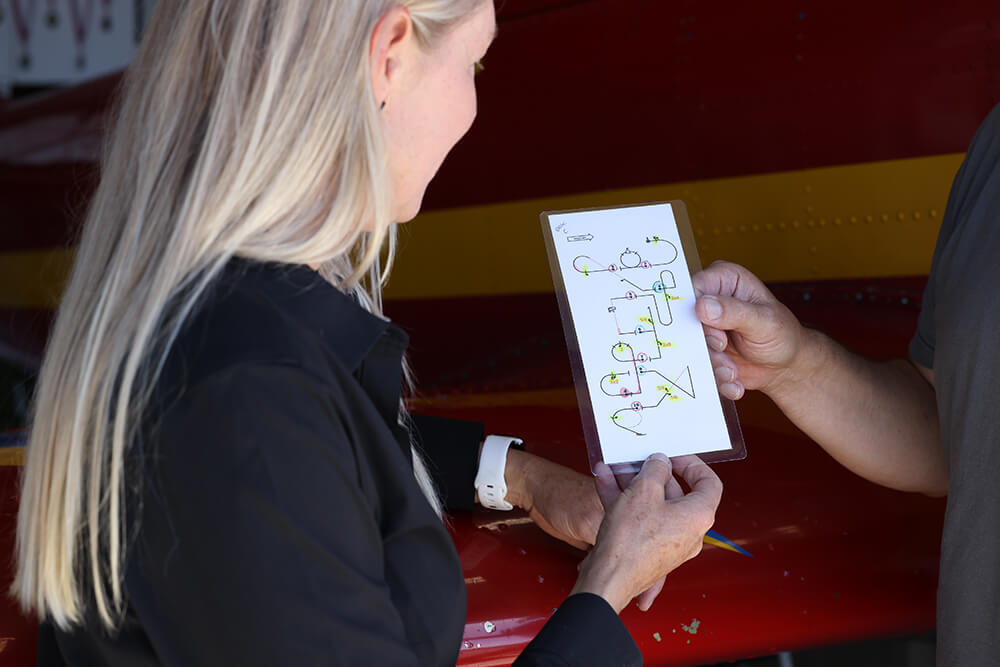 After squeezing in training around their day jobs, Ross and Marian decided to go for it in 2017, traveling to Tula, Russia, with their Half Moon Bay teammate Brian Branscomb, to compete in the 5th Yak 52 championship. With thousands of spectators watching, the competition involves flying a series of sequences—typically four minutes in length—that include a mix of compulsory and “free” figures that the pilots pick themselves.

“The judges want to see the presentation right in front of them,” Marian explains. “That’s the real difficulty,” adds Ross. “It takes a certain amount of time to learn how to do the figures, but then you have to put the figures all together in this sequence and keep it within a little 1,000-meter aerobatic box. It’s like flying between a bunch of skyscrapers.”

The American team claimed fourth in their first Yak 52 competition. “If there was an award for the team who learned the most, we would have won gold,” Ross smiles. The couple flew in two U.S. contests after Tula and recently participated in another world championship in Torun, Poland. They hope to see more U.S. aerobatic pilots joining them at the next YAK WAC, date and location still pending. 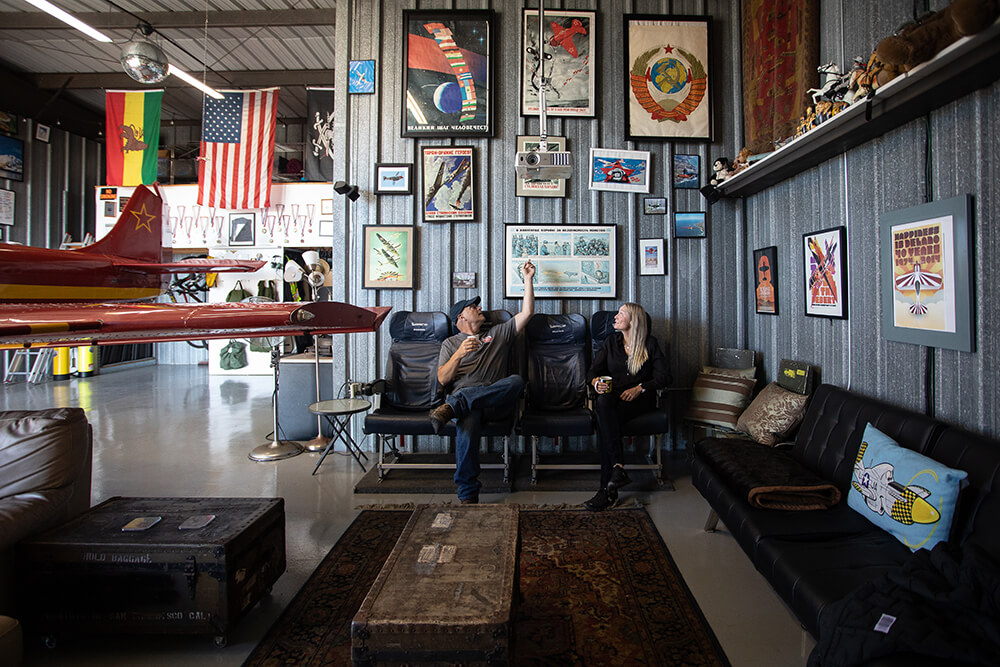 The couple’s Half Moon Bay hangar is filled with flight memorabilia—tail feathers, trophies, medals and a striking collection of photos and flags. After earning her license, Marian learned that her great aunt was an original air racer in the late ’20s and ’30s. She proudly displays a black & white image of Elizabeth Kelley posing with Amelia Earhart and the legendary test pilot Pancho Barns. Also here are banners and flyers from their other commitments. The two pilots prioritize taking flight for “both fun and community,” which includes volunteering for the San Mateo Disaster Airlift Response Team, helping coordinate searches for entangled whales and hosting and supporting Young Eagle flights to introduce kids to flying and aviation careers.

Although they credit flying with bringing them together, “It’s a part of it, but it’s not everything,” Marian is quick to point out. But for now at least, they’re relishing every moment of each roller coaster ride in the sky.