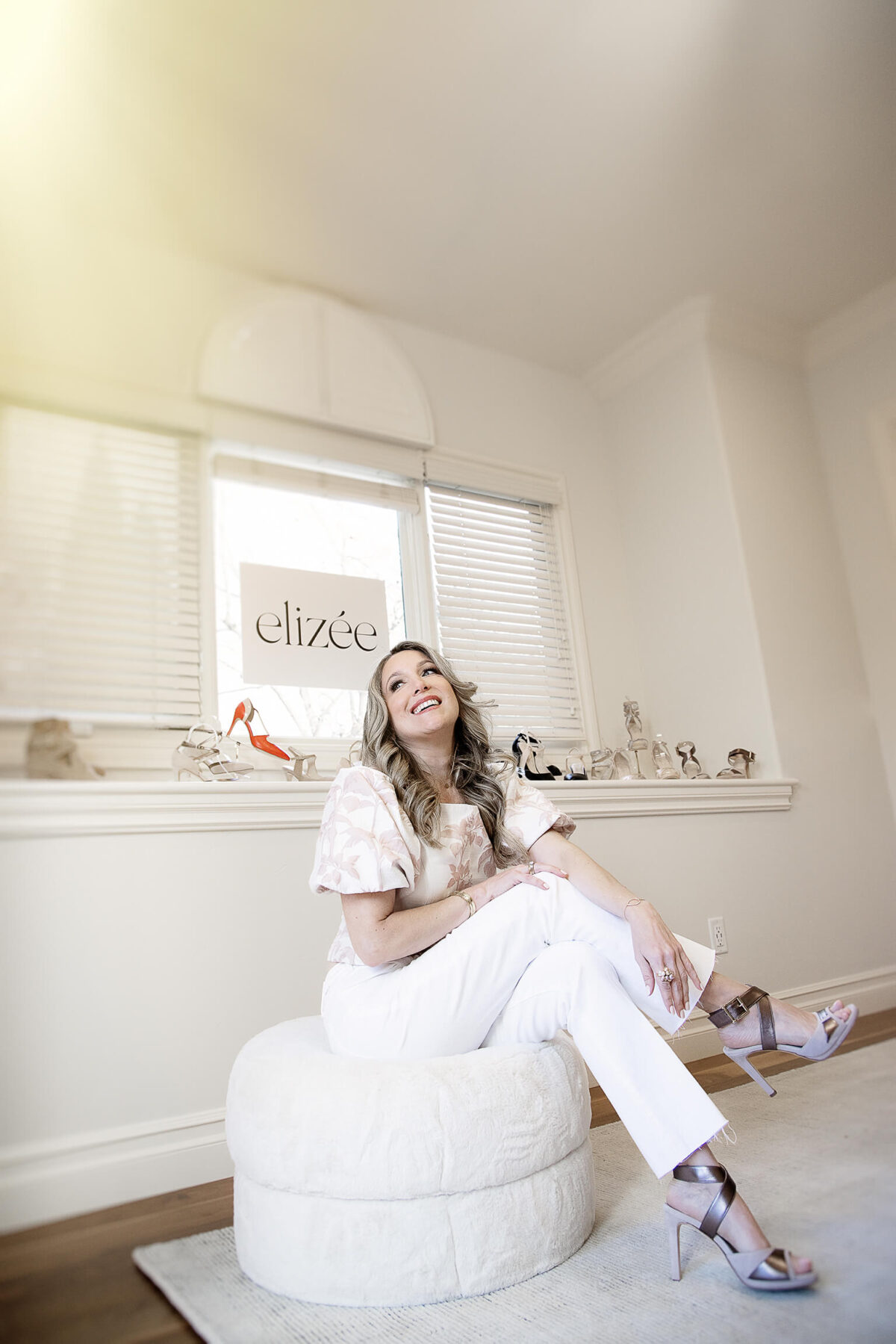 Erika Carrero didn’t set out to become a luxury shoe designer, but it happened the same way the Los Altos resident does everything in life: with a vision for the future and a lot of hard work. While a student in her home country of Peru, Erika held a full-time job as a full-time university student and she cheerfully calls herself a nerd.

“I was one of those kids who was always happy doing homework,” remembers Erika. “I really like studying. It’s good for your brain.”
Erika’s determination led her to Santa Clara University, where she earned her MBA. That degree opened the doors to Silicon Valley and her career took off. She landed in software and SaaS doing operations and finance, working her way up and doing a lot of business travel. She found herself flying at least once per quarter to far-flung destinations such as London, Stockholm, Argentina and Mexico, where her position required a high degree of skill and even higher heels.

“I needed to wear heels constantly,” recalls Erika. “We’d be in meetings all day and then on to dinner, drinks and dancing, and then start the next day with 8AM meetings. I was always in pain.”

Later, as the CFO for a startup, she was traversing the U.S. searching out companies to acquire, all while still wearing excruciatingly painful high heels. When her own company was sold, Erika finally had the time and the financial foundation to explore a business idea she’d been playing with: Why not create a line of both comfortable and luxurious high-heeled shoes? It was an idea growing more insistent with every painful blister and bunion—and one she’d been preparing for for several years.

Once again, Erika had been educating herself. After her MBA, she earned her CPA and completed a certificate in finance from UC Berkeley and a Stanford executive leadership course, all while working full-time and starting her family. 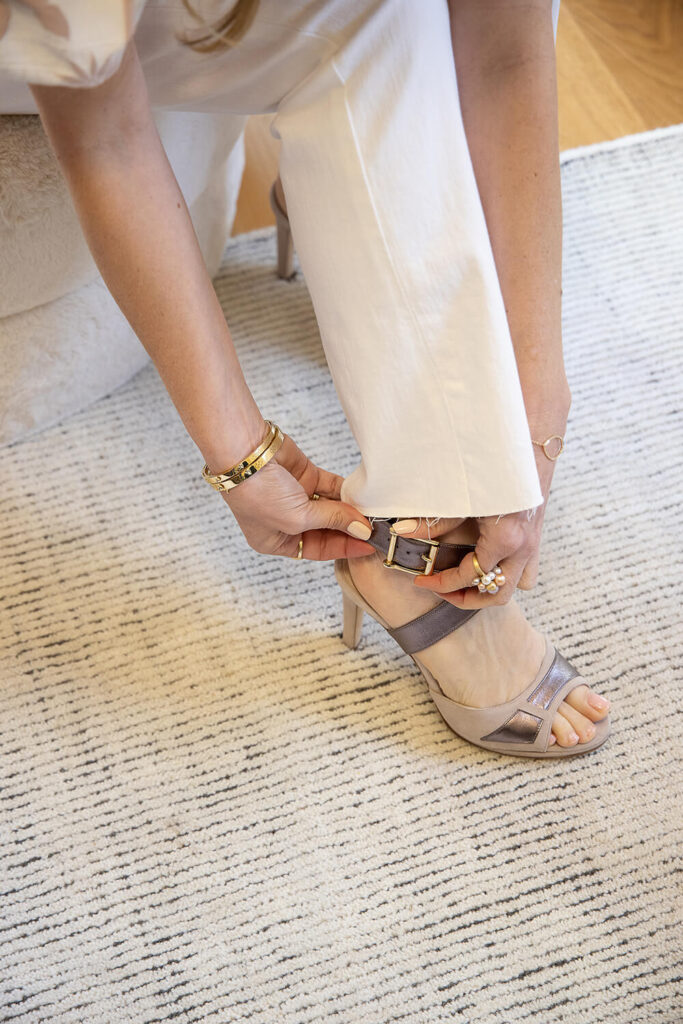 “To me, education is such an important part of life,” espouses Erika. “Every stage of my career has been about education. It pushes you forward.”
Forward indeed. It was at the Stanford leadership course where she met someone who worked in the luxury accessories sector. Now Erika had someone to give her guidance and answer her myriad of questions about the footwear business. She gave Erika good advice, telling her to “concentrate on the product and the shoes will sell themselves.”

Erika had already been taking online classes to learn shoe design from the esteemed Arsutoria School in Milan. After attending Arsutoria’s in-person course in Los Angeles, she was hooked. Erika headed to Italy where she immersed herself in every aspect of shoemaking. And she appreciated that the hands-on program extended Arsutoria’s network of suppliers and factories to its students.

“That’s how I met my team, through school and also by knocking on doors,” explains Erika. “No one was answering my emails, so I went out knocking, thinking, ‘I don’t have anything to lose if they say no.’”
She ended up choosing a factory in Vigevano in the Lombardy region outside Milan. It’s known for its 1492-era Piazza Ducale, the Castle Sforzesco and centuries of shoemaking, highlighted at the Museo della Calzatura. The town also holds an annual shoe fair and market. Erika says Vigevano is a small town that used to be the center of shoemaking in Italy and continues to be a style capital. The proof? According to Erika, Manolo Blahnik uses the same factory she does and if that weren’t enough cred, she’s also expanding to have her shoes crafted in a Tuscan factory used by Gucci.

With her manufacturing in place, Erika focused on function, style and branding. She decided to name her business Elizée and incorporated in 2019.

“Elizée means the tradewinds in French, joyful in Hebrew and Elizabeth is my middle name,” says Erika of her Los Altos-based business. “It was inspired by my passion for travel.” 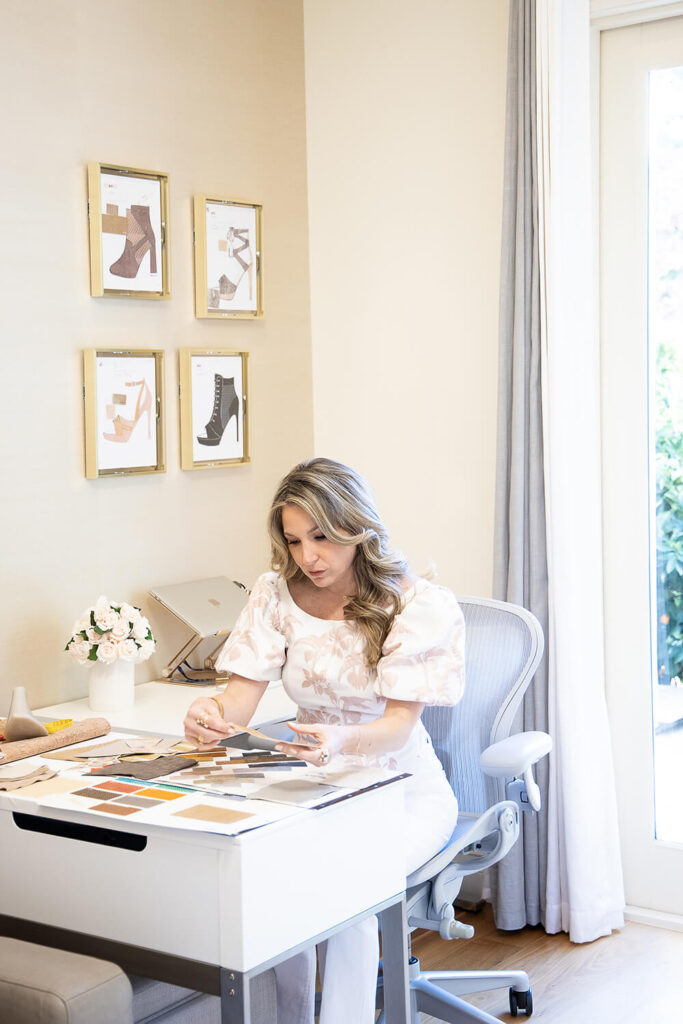 Already seeing steady customer growth, Erika’s luxury shoe collection is an assortment of pumps, sandals and booties, all handcrafted in Italian nappa leather—a top-quality leather that undergoes a unique tanning process which creates softer, more pliable hides—and all featuring 3- to 4-inch heels. With influencer sightings including Kathy Ireland, Access Daily and The Real Housewives of Orange County, the high-glamour, comfortable shoe line is also creating buzz with fashion editors, celebrities and stylists.
Erika designs each shoe herself. She looks at the trends and her team in Italy gathers leathers for her to approve based on mood boards she creates. Functionally, she avoids placing seams in sensitive areas like ankles or big-toe bunions, resulting in a shoe interior that feels soft and doesn’t cause discomfort.

“I really study and I don’t want to do anything that I don’t understand really well,” notes Erika. She even traveled to London to meet the shoemakers to the Queen as part of her research.

The defining feature of Erika’s shoes is the product innovation. To achieve her goal of making a luxury high heel with all-day comfort, Erika created an insole called Plush Contour. She did it by analyzing what makes shoes comfortable: They need to be made from the best traditional and high-tech materials and approved by podiatrists.

Unlike most heels with just a piece of cardboard between the outsole and insole, Elizée’s high-density poron memory foam combines with a layer of responsive gel that molds to your foot and absorbs the impact of your footsteps.

“Traditional luxury shoes are slim and very narrow, and to achieve that look they use thin padding—and sometimes just cardboard or thin foam—which leaves very little between your foot and the street. Using materials typically found in sneakers goes against the grain,” explains Erika, adding, “Louboutin red bottoms wouldn’t work with an insole like mine.”

But that’s okay with Erika, whose target customer is not just the Louboutin girl but also the woman who hasn’t worn high heels in a while and would like to try it again.

Erika is proud to say, “People are surprised at just how comfortable they are.”