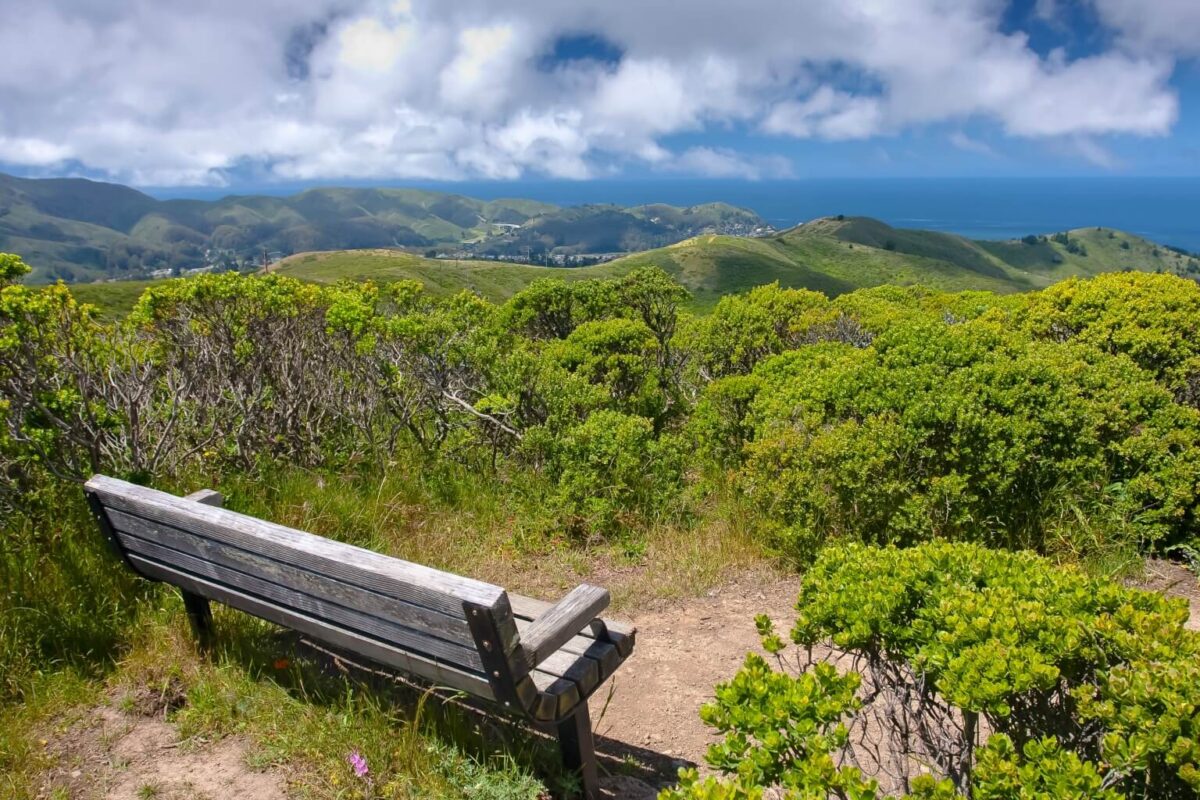 Hiking on the Peninsula places you footsteps away from some important historical moments and sites. Given that July is a month we think about historically, what with the Fourth of July and all, here’s a selection of hikes where you can also soak up some history. Sweeney Ridge is part of the Golden Gate National Recreation Area. At its 1,200-foot summit, you can stand at the spot near where, in 1769, Gaspar de Portolá became the first European to lay eyes on the San Francisco Bay. A granite monument directs visitors to see—on a clear day at least—the Farallon Islands, Mount Tamalpais, Point Reyes, Mount Diablo, Montara Mountain and San Pedro Point.

Not far from the Portolá expedition historical marker are the remnants of the Nike Missile Control Site SF-51, which today is a rather ramshackle graffiti gallery. This was one among a number of missile sites built during the Cold War as the last line of defense against Soviet bombers. With the advent of long-range missiles, these cinderblock structures were left to decay in place.

A third spot of historical interest is Shelldance Nursery on the Pacifica side of the ridge. In 1949, Herb Hanger erected a cluster of Lord and Burnum greenhouses where he created hybrid orchids. The nursery, which is open to the public on the weekends, still cultivates hundreds of orchids and bromeliads in the greenhouses.

The Mori Ridge Trail from the Nursery leads up to the summit. While the out-and-back distance from trailhead to Discovery Site is just a little over five miles, this is a climb that begins steeply and then gets steeper, recommended only for those who are fit.

A less arduous ascent is from the Sneath Lane trailhead in San Bruno. The paved pathway is accessible by cyclists as well as hikers and has just a few good pulls before it levels off at the ridge top. You can enjoy the 360-degree views by continuing south on the Sweeney Ridge Trail to where it dead ends near San Francisco Water Department lands. Retrace your steps back to the trailhead for a hike of about six miles (depending how far you go once on top). In the early 20th century, successful San Francisco businessman and investor Mortimer Fleishhacker and his wife Bella commissioned noted Pasadena-based architect Charles Green to build an English estate on the Peninsula. The result is the magnificent 74-acre Green Gables, which is currently up for sale for the first time in more than 100 years.

The main house has been on the National Registry of Historic Places since 1986. While trails on the estate itself are only open to Woodside Trail Club members who are given keys to open the locked gates, there’s a public trail that’s adjacent to the property where you can catch a glimpse of the buildings through the trees.

Not far from Green Gables is the Woodside Store, both a California and national historical landmark. Built in 1854 among sawmills and redwood groves, the store was purchased by the County of San Mateo in 1940 and opened as a museum seven years later.

An easy out-and-back two-mile hike starts from a pull-out near 329 & 331 Albion Road. Turn right onto Manuella Avenue. It’s along here that you’re adjacent to Green Gables. There’s a marker noting the Fleishhackers’ contributions to the community. Turn right on Kings Mountain Road to reach the Woodside Store.

+ Open to hikers, equestrians and leashed dogs—please do yield to horses

+ Mostly in the shade The 176-acre Thornewood Open Space Preserve was once the estate of Julian and Edna Thorne, who developed the land in the 1920s. But the area’s roots run deep.

In the mid-1800s, Dennis Martin had two redwood sawmills along a creek within what is now the Preserve. Martin, who was born in Ireland, was a member of the first wagon train to cross the Sierra Nevada into California. The creek in Thornewood bears his name.

The preserve’s Schilling Lake is named after spice company owner August Schilling, who bought hillside acreage, excluding the summer home that noted architect Gardner Daily had designed for the Thornes. The home is situated so that its occupants had unobstructed views of the valley below. We can only imagine as it’s off limits; a private party is leasing and restoring it.

We started our 3.5-mile, round-trip hike at a pull-out along Old La Honda Road. There’s a sign marking Dennis Martin Creek there. We ascended steeply through the forest on the Bridle Trail. (But saw no horses!) Near the top, a left turn takes you to Schilling Lake, now almost invisible below the thick growth of vegetation.

Wanting to extend our hike, we took a broad path upwards just to the right of a private road. If you were to follow the path to its end—we did not—you’d hit Grandview Drive, which connects to Highway 84 almost at Skyline Boulevard.

Along this stretch we encountered a local homeowner who told us of the many Schilling-built ruins on the preserve, such as a fountain so overgrown it was barely recognizable. Reverse your steps on the return.

+ Limited parking on Old La Honda Road, about a half mile from Portola Road

+ Terrain is dirt with forest mulch

+ Mostly in the shade

+ More about Thornewood Preserve, including a map: openspace.org/preserves/thornewood The 942-acre Wunderlich Park stretches from Woodside Road to the Skyline, providing 17 miles of trails through beautiful second-growth redwoods scattered with artifacts left in place by its successive owners. Coincidentally, the Portolá expedition camped here before traveling north.

Occupied initially by Native Americans, the hills and ravines of Wunderlich were logged in the mid-1800s and then farmed in the 1870s. Some of the planted fruit trees still exist.

In 1902, James A. Folger II, the son of the founder of the Folger Coffee Company, purchased the property and turned it into a recreation area. Roads constructed to haul lumber became riding and carriage trails. It was Folger who built a large mansion (now privately owned and located adjacent to the park) as well as the main stable, carriage house, blacksmith barn and dairy house. These four buildings make up the Folger Estate Stable Historic District. A walking tour of the buildings takes about 30 minutes.

For the more ambitious, you can hike from the parking area all the way to Skyline on the Alambique and Skyline Trails, a round-trip distance of 10 miles. Lacking the time—or ambition—you can enjoy a five-mile loop that ascends on the Bear Gulch Trail, connecting mid-way up to the Meadow Trail, which crosses the park to pick up on the Loop Trail for the descent back to the parking lot.

+ Open to hikers and equestrians; no cyclists or dogs