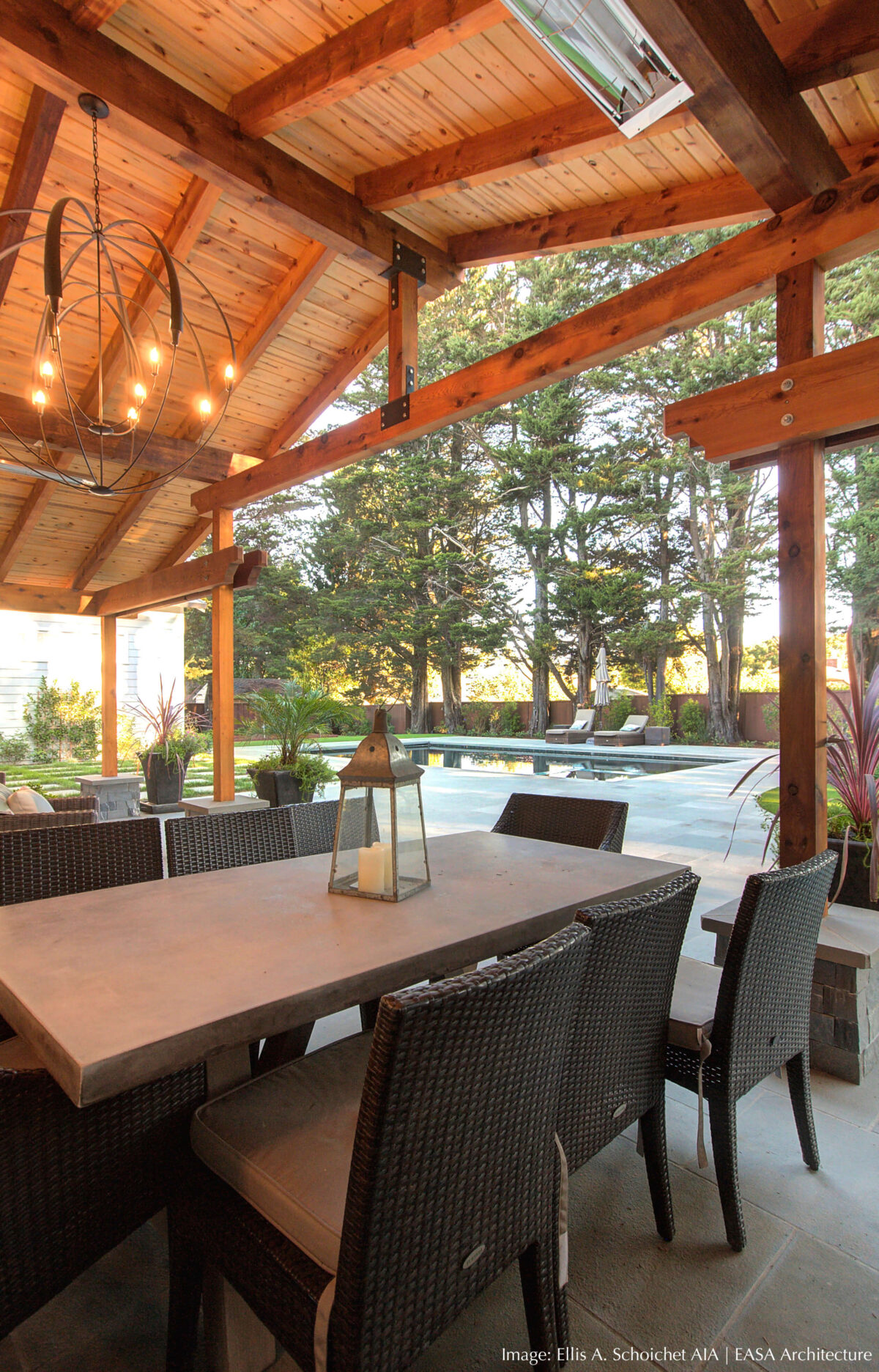 The past year has really driven home the concept of home—which most of us equate with shelter, support and security.

“Home has become so much more important in the pandemic as the place where you are safe and you keep your family safe,” says Sara Furrer, co-president of SolMateo. “If your home is a safe and wonderful place, that’s a real gift to you and your children that a lot of people just don’t have right now.”

It seems appropriate that the all-volunteer nonprofit relies on Peninsula homeowners to assist in its mission to shine a light on mental health. Every May, in conjunction with Mental Health Awareness Month, SolMateo hosts its annual Signature Kitchen Tour to raise awareness and funds for two local mental health-focused organizations.

SolMateo’s 40th Signature Kitchen Tour is set to feature five homes in Burlingame, San Mateo Park and Hillsborough, with the self-guided event showcasing stunning architecture and inspiring designs. “Who doesn’t want to visit someone else’s beautiful house?” says Sara. “By asking homeowners to open up their homes, allowing hundreds of guests to come through on a given day, we can make a difference in keeping people safe and safely housed.”

Originally scheduled for May 2020 and then postponed again this year, the official date for the 40th tour is now May 13, 2022. Despite the delay, the owners of an Upper Hillsborough home remain 100% committed as Signature Kitchen Tour hosts. In addition to offering up a preview for PUNCH, the volunteers want to underscore why community involvement is so vital.

“When asked if we would participate in the Kitchen Tour to raise money for SolMateo, the answer was automatically, ‘Of course!,’” shares one of the homeowners. “The reality is that at some point, you or someone you know or love will be impacted by mental health, yet it is often overlooked, undersupported and misunderstood. The need for easily accessible, quality mental health care is greater now than ever.”

SolMateo’s co-presidents, Nancy Minnig and Sara, have their own motivations for volunteering. Raised in San Mateo and now living in Hillsborough, Sara aligned with SolMateo about a decade ago, recognizing that mental health doesn’t get the attention it deserves. “It’s what I call the not-fuzzy-puppy charity,” she says. “People don’t like to look at what happens with people who suffer from thoughts of suicide or mental illness or homelessness.” 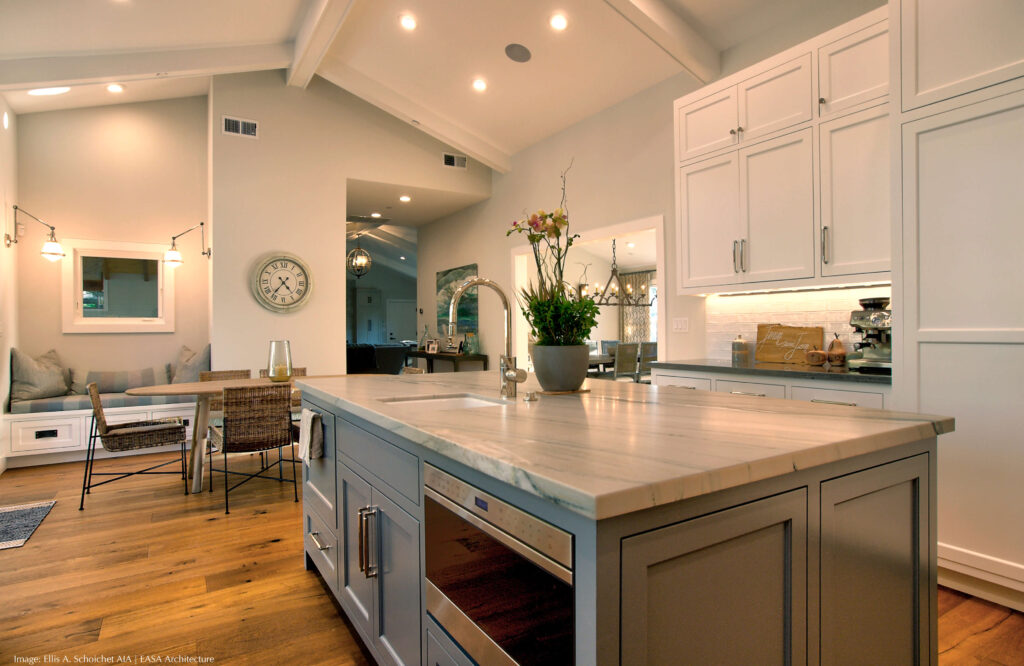 Also rooted on the Peninsula, Nancy recently moved from Burlingame to San Mateo. Having lost her sister and niece to drug overdoses, she didn’t have the choice to look away, so she sought out ways to help. About seven years ago, she was introduced to SolMateo by a friend and immediately knew that it was the place for her. “We are a group of dedicated, smart women who have big hearts,” she says. “We’re providing support for our community and trying to educate people so they know that we’re all in it together, especially now.”

Since 1976, SolMateo has donated over $2.6 million to the Mental Health Association of San Mateo County (MHA) and
StarVista. With programs that date back over 60 years, MHA is dedicated to restoring dignity and reducing homelessness, particularly for those affected by mental illness and HIV/AIDS. Based in San Carlos, StarVista serves over 40,000 individuals and families each year through counseling, crisis prevention, youth housing and outreach programs. SolMateo specifically supports StarVista’s Crisis Intervention and Suicide Prevention Center.

“SolMateo is the largest private donor to both organizations,” explains Sara. “We are funneling money into what’s happening at the ground level for kids dealing with suicide or families dealing with homelessness and mental illness. Both organizations use our money for the most pressing needs and that’s not always possible with other funding sources.”

The Signature Kitchen Tour raises money through a combination of ticket sales and business sponsorships. SolMateo points to partners like Don D’Elia, the builder behind the Upper Hillsborough home, as being essential to their efforts. “Don builds great houses, and that’s how he makes his living,” says Sara, “but it’s important for him that a part of what he builds goes back to the community.”

A longtime supporter of SolMateo, as well as other nonprofit organizations, Don says that observing SolMateo’s direct impact is highly motivating. “There are a lot of people who suffer out there quietly, painfully, and they’re right in our front yard, not our backyard,” he says. “These are the types of services that need our support.”

Based in San Mateo for nearly three decades, the high-end custom home builder and remodeler teamed up with EASA Architecture and Cindy Foti Interiors on the Hilsborough project. Don describes the homeowners as a young couple who bought the home in the Carolands neighborhood with plans to expand their family. “They wanted a very comfortable home,” he says. “They wanted the house to live easily.”

For the project partners, that meant creating a greater sense of flow in a classic rancher. “Some of the room sizes were fine,” notes Don, “but it didn’t have a great room, big kitchen, sizable master and ensuite bathroom and closets.” To evoke a more modern, spacious look, the remodel involved adding 900 square feet and raising the ceilings as much as possible. As an example, says Don, “the living room was a flat eight-foot ceiling and we vaulted that and changed it dramatically.”

In addition to adding custom features like architectural beams, cabinetry and outdoor raised garden beds, the remodel included a complete overhaul of the backyard. As the project’s interior designer, Cindy Foti, summarizes, “There are not many old parts left there, but it’s still the original structure.” Cindy emphasizes that a once old classic rancher is now a home that will stand the test of time. “They did this house until it was done,” she says. “They brought it all the way there.”

Look for the Upper Hillsborough home on the 40th Signature Kitchen Tour in 2022, and keep an eye out for news about SolMateo’s Holiday Auction, the nonprofit’s other major fundraising event. In the meantime, SolMateo encourages your continued support of organizations that help keep our Peninsula community safe and secure—so that everyone can have access to a true sense of home.