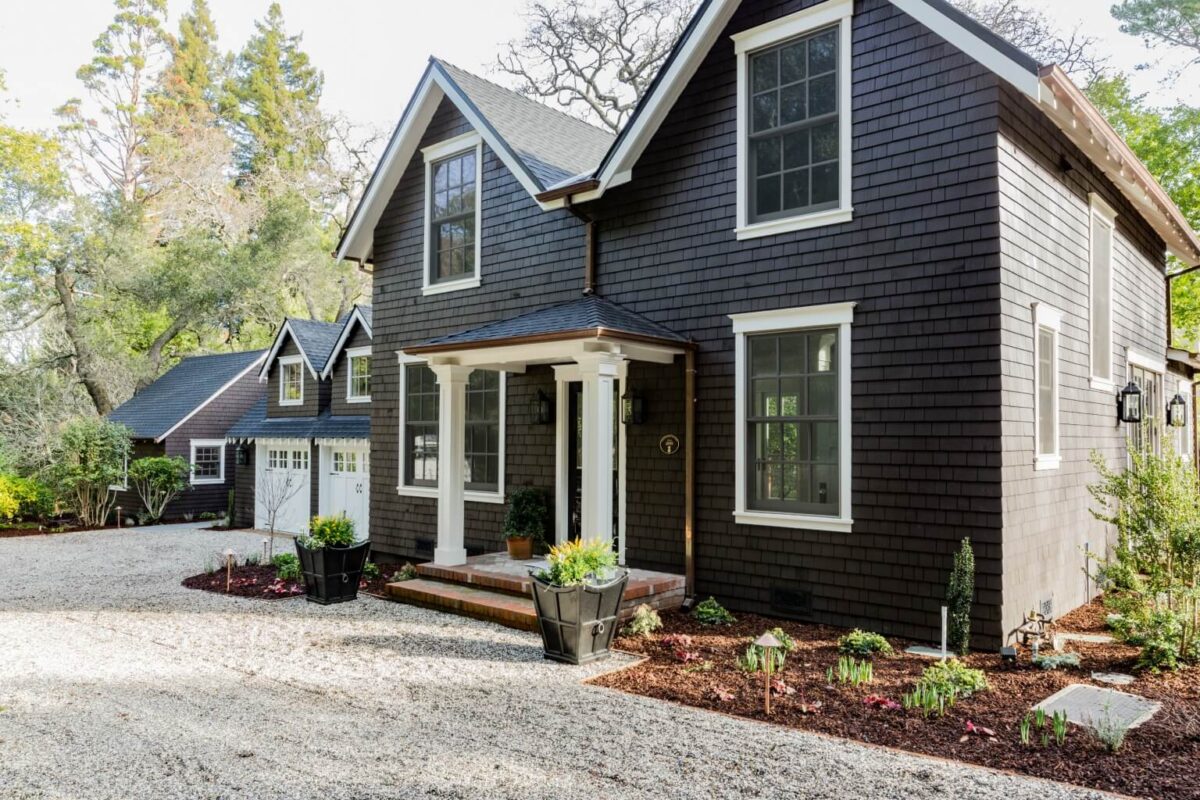 This is the story of a little gardener’s cottage on what was once an expansive Hillsborough estate. Henry T. Scott, a San Francisco mogul, shipbuilder and one of the founders of Pacific Telephone and Telegraph, built Oakhurst in 1895 as a second family home maintained by a staff of 10 servants. Tucked within the property, between lush flower and vegetable gardens, Scott placed a small outbuilding, a 1,570-square-foot shingle-sided cottage with steep gables, where the gardener lived, tending to the fresh produce and flowers that would be taken up Fern Court to the main residence at the top of Forest View Avenue.

Over time, the Scott estate was subdivided into smaller lots but the little cottage endured, occupied by an artist in the 1930s who enjoyed drawing in an upstairs bedroom that captured the morning light. In 1943, Edith (Edie) North, a passionate gardener, purchased the property from the Scott estate. In 1949, she invited her daughter and son-in-law, Betty and Bill Horn, who were living in San Francisco post-war military housing, to join her. They added two more structures, a garage and a 692-square-foot “little house,” where Edie could reside independently. Edie also deeded the property over to Betty, intrinsically linking the fate of the gardener’s cottage to the lives of four Peninsula women: Betty Horn, Pandy Garvic, Doris Rivett and Sue Subbotin-Riviello.

Betty and Bill Horn raised a son, Bill Jr., and a daughter, Ean, in the gardener’s cottage, surrounded by prolific wildflowers and the restful burbling of Sanchez Creek running at the back of the property. Betty cherished her home and the simplicity of its idyllic setting. Like her mother before her, she was an award-winning gardener. She joined the Hillsborough Garden Club and spent countless hours tending to camellias, lilies and a whole profusion of perennials. Even as mega-mansions rose up around the little cottage—5,000 square feet here, 12,000 square feet there—Betty maintained her family’s simple, peaceful lifestyle. The early years of Hillsborough fascinated her and she researched and lectured extensively on Hillsborough’s oldest estates, contributing to the preservation of the area’s history. Time passed, and Betty and Bill’s children grew up, moved away to college and settled in other states. As they were adjusting to being empty-nesters, Betty and Bill met Pandy Garvic.

In 1965, after graduating from Ohio State University, Pandy moved to the Peninsula and began working as a dental hygienist where she frequently chatted with her patients, Bill and Betty Horn. “Bill was originally from Ohio, and so we had that Ohio connection,” she remembers. “I was missing my parents, and they were missing their kids, and it was just an immediate connection.” Bill and Betty became Pandy’s surrogate parents, and the little gardener’s cottage became her second home. “It was always special. I have so many amazing memories here. The garden was always wild and natural, and you felt like you were a world away with the uniqueness of the setting and just this wonderful couple who lived here.” That same sentiment would be shared by Doris and Bob Rivett, who bought the house next door in 1995. Having moved from the East Coast, Doris and Bob settled into their new lifestyle in Hillsborough and were instantly enchanted by their neighbor, Betty. “Betty was just turning 80 the year we moved here, and she threw herself a party in our shared driveway and invited us,” Doris recalls. “She was always a very active, vivacious and lovely woman.” Starting as “next-door neighbor friends,” they forged a genuine friendship and frequently conversed about their common passion for gardening. “We’ve always had properties where we could grow abundant flowers, particularly roses, vegetables and fruit trees, so there was always that connection with Betty; the outside of the home is as important to us as the inside of the home,” Doris says. For nearly 20 years, the Rivetts and Betty lived side by side, and the attachment between the neighbors grew: “We wanted Betty to live forever. We knew she probably wouldn’t, but we were hoping she would.” With the help of a caregiver in her later years, Betty never had to move out of her beloved little cottage. She passed away in 2015, just two weeks short of her 100th birthday.

As family and friends grieved the loss of Betty, Pandy also prepared for a new responsibility. Having left the world of dentistry, she now had a successful career in real estate. For Betty’s children, living in Washington State, it was a natural fit for Pandy to handle the sale of Betty’s one-acre property. After the constraints of the cottage’s historic status added too much complexity to envisioned plans, an initial buyer withdrew. For the Rivetts next door, it was a fortuitous opportunity. “When the buyer cancelled the contract, we went in,” Doris recounts. “The house has historical significance. We really wanted to restore it. Betty didn’t want the house to fall into disrepair and be torn down. She didn’t want a mega-mansion.” Pandy brokered the deal, and Doris and Bob Rivett became the new owners of the historic gardener’s cottage—leading to the final link in the chain: Sue Subbotin-Riviello.

Sue grew up in Burlingame, the fourth generation in her family to live on the Peninsula. “My grandfather’s parents built one of the first homes in Burlingame and I’m told my great-grandfather was one of Burlingame’s founders. I grew up hearing stories about playing on the Crocker Estate and El Camino being a dirt road with maybe one car a day,” she remembers fondly. After earning an economics degree from UC Davis, Sue worked in advertising, before finally deciding to pursue her passion for design—which led her to the Parson’s School of Design and a career in New York City. After moving back to the Peninsula and starting her own interior design firm, she met Pandy in 1993 while working on a Hillsborough Showhouse for the Coyote Point Auxiliary. They stayed in touch through the years, and in 2015, Sue got the call. “You’ve got to come over to see this house,” she remembers Pandy saying. “This was after Betty had passed away. I drove up and I just felt it. The cottage oozed charm, and the garden was overgrown, but you knew in its heyday, it was a jewel. Pandy told me the story and said they needed someone to bring it back to its original glory.”

Pandy made the introductions, and Sue felt an instant connection with Doris and Bob Rivett. “They were a joy to work with, and we all had the same goal and the same feeling. We wanted to honor Betty and restore the integrity of the home,” she says. Under the guidance that the property would be used by the Rivett family and perhaps as a rental one day, the job was threefold: update the “little house,” rebuild the garage and restore the historic cottage, within the parameters set by the Hillsborough Historical Committee. After Sue did the space planning, an architect drew up the designs and Sue teamed with contractor Aaron Quinn to effect the transformation: “We wanted it to be livable by today’s standards while maintaining its charm.” Restoring the Gardener’s Cottage required inserting a new foundation, taking the structure down to the studs and rebuilding it identically. The original cottage had more than its share of quirks—from steep, steep stairs to a single outlet on the second floor to ill-placed bathrooms that were added after the original construction to provide in-house plumbing. And while the restored exterior is an exact replica, Sue took more creative license with the interiors—moving the staircase and creating an open, versatile space, accented by custom-designed columns with a tie-in to the custom fireplace mantel. “The entire downstairs is painted in Benjamin Moore white dove. I felt that color could be brought in with the artwork, furnishings and the rugs,” Sue shares, noting that the interior decor will be added gradually. “We moved Doris’ antique dining table in, which looks phenomenal with the more modern kitchen.”

Sue selected a Waterworks board and batten tile for the kitchen backsplash, which she replicated in wood for the dining area. For the master bathroom shower, she chose a Waterworks wainscot tile, capturing the look of the cottage’s original wainscoting. For another tone-setting example, Sue points to the downstairs powder room wallpaper—designed by Half Full in San Francisco: “It’s an old-fashioned cottage rose with an updated twist of adding Black Robins. It felt appropriate for the era of the house.” Most of all, because of Betty, Doris and Sue’s shared love of gardening, “we really tried to blend the outside with the inside,” adding a back French door and patio to create a sense of expansiveness.

For the “little house,” which had been built in the early ‘50s, Sue faced a different set of challenges—like updating the original kitchen, which was functionally “a kitchen in a closet.” Although the permitting took longer, Sue assessed the structure’s original flat ceiling and knew it needed to be vaulted: “I am so happy we did that because it makes the small room feel so much more spacious.” To dramatize the effect, Sue selected a Shades of Light iron ring chandelier to cost-effectively transform the space. “Basically, we renovated the entire building,” Sue says, gesturing to another favorite design choice, a Dutch door, swinging half open to usher in even more light and air. Furnishings and finishes will be added bit by bit, even as progress is being made on landscaping and restoring the gardens. There’s also talk of adding wooden window boxes and a trellis. But those are just details. Originally built in 1895, the gardener’s cottage has been successfully preserved. “I sell a lot of houses, and I’m always hearing, ‘Oh, this is a scraper. Tear it down. Build to the lot line,’” Pandy says, taking a moment to reflect. “This house found its rightful new owner, it found its rightful designer and it is all about preserving a piece of the past with the way people want to live today. It’s a good reminder that there is beauty and there is function if you want to stay within what you have.”

Thinking back on her dear friend, Betty, Pandy continues, “Our entire motivation was, what would make Betty happy?” With tears welling up in her eyes, she finishes her thought, “I can feel Betty smiling. There is so much of her energy still in this place. I feel it every time I walk in here.”