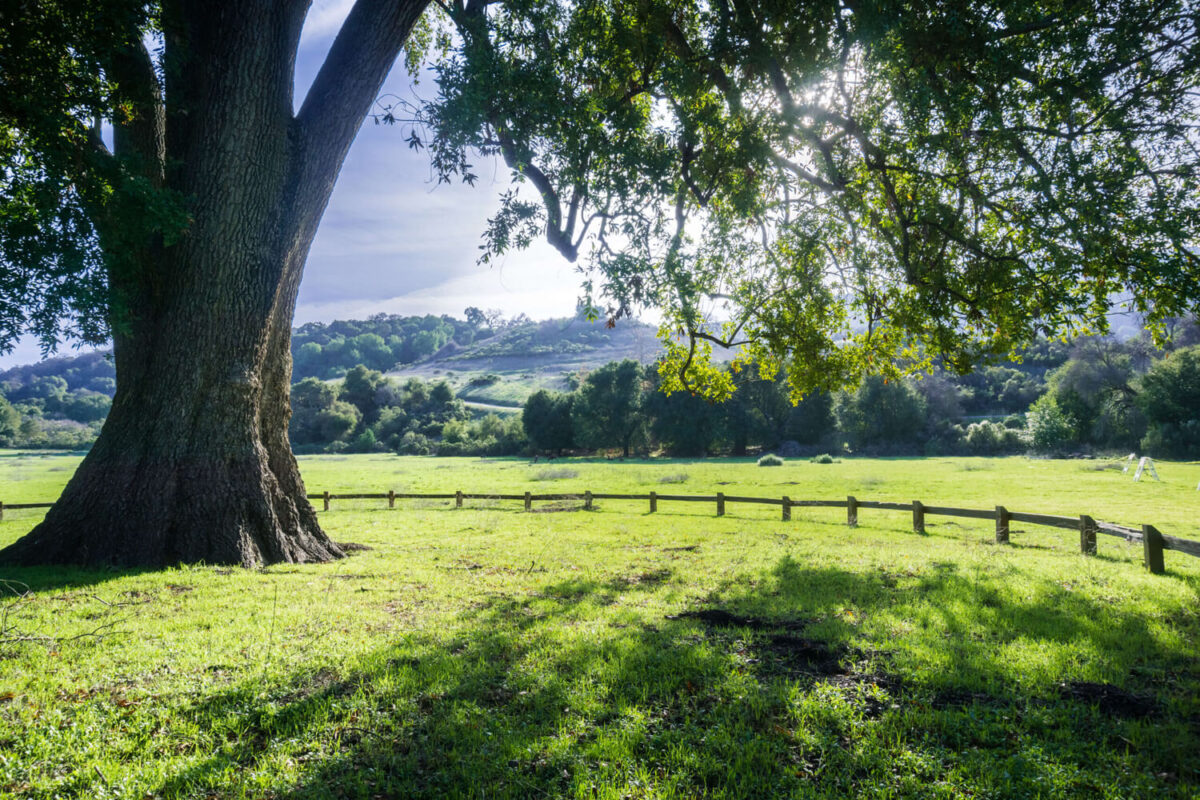 Hiking and history don’t usually go hand in hand, so we’re lucky to have local trails offering an enticing blend of both. If you’re a history buff, don’t miss the opportunity to explore stunning scenery while discovering the Peninsula’s rich past.

Managed by the Midpeninsula Regional Open Space District, Rancho San Antonio includes a  3,988-acre open space preserve and a 289-acre county park. All told, that translates into a hiking mecca—24 miles of trails with stunning views ranging from easy and scenic to more challenging climbs into the backcountry.

Historically, Rancho San Antonio was first home to the Ohlone Indians over 3,000 years ago. The park’s docent-led tours and educational programs are temporarily on hold, but it’s worth the effort to study up on your own. With its wide valley tucked between the coastal range and the Bay, it’s easy to picture Colonel Juan Baptista de Anza, a founding father of Spanish California, leading the first San Francisco overland expedition through the ranch in 1776. In the 1800s, several prominent rancheros and a former Presidio soldier owned Rancho San Antonio, which became a thriving cattle ranch with grain crops and vineyards. 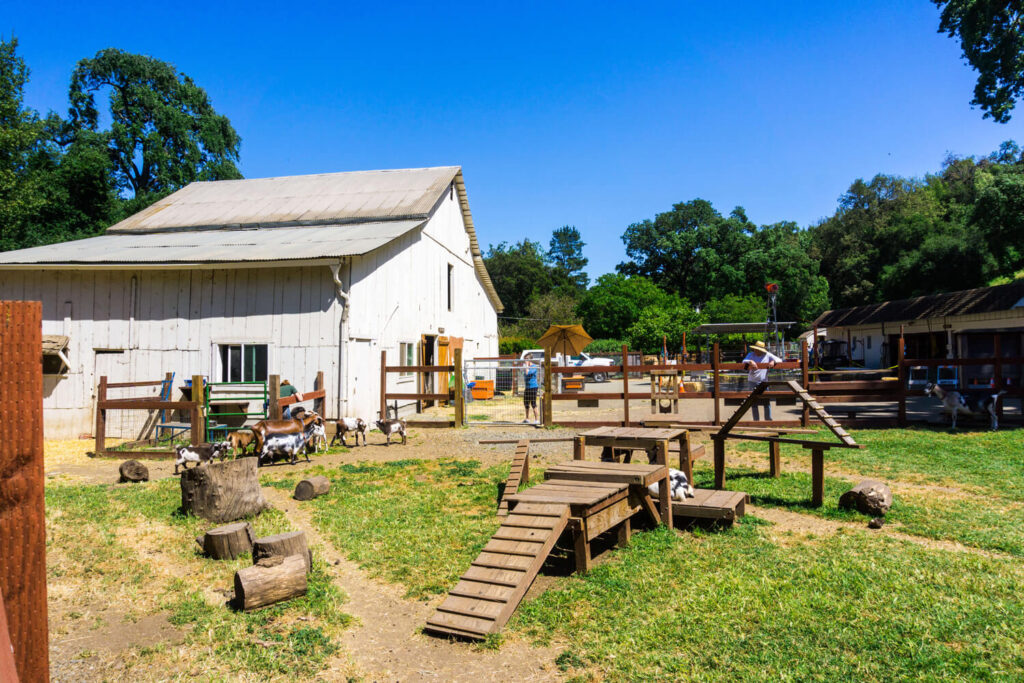 I begin my ascent on the Coyote Trail above the park’s valley floor and climb radiant hills dotted with oak trees. Hiking deeper into open chaparral, civilization slips away and I relax into the expanse of the forest. While the coastal mountains look golden in the late summer sun, this trail first enticed me in the spring when its lush greenery evoked memories from the Swiss Alps. From the Coyote Trail, I connect in with the Wildcat Loop Trail and follow a fern-rimmed creek down to Deer Hollow Farm for a three-mile loop.

Pausing to let a gaggle of wild turkeys cross the trail ahead of me, I take in the working farm alive with cows, goats, sheep and flocks of chickens, ducks and geese. An open barn offers shaded picnic tables with views of towering sunflowers and vegetable gardens. Note: Deer Hollow Farm can also be reached by a paved (stroller- and kid-friendly) one-mile trail from the parking lot. Admission is free; however, check public access restrictions before visiting.

Also, be prepared to share some trails with mountain bikers and equestrian visitors. The popular park has several parking lots, but it’s a good idea to arrive early to ensure a spot and to take advantage of the park’s tranquility.

For those who love the serenity of the redwoods, Sam McDonald Park is an ideal destination located just three miles west of La Honda on Pescadero Creek Road. As Steinbeck said, “The redwoods, once seen, leave a mark or create a vision that stays with you always.”

The park’s namesake, Sam McDonald, was a beloved superintendent of athletic grounds at Stanford University. A grandson of southern slaves, Sam became the first man of color to own property in the redwoods in California in 1919. Famously hospitable, he often hosted the Stanford football team on his property and even befriended President Herbert Hoover.

In this 867-acre redwood forest, I took on the challenge of Sam McDonald’s Forest Loop Trail for some elevation changes and climbs. The trail begins with a fire road and narrows in sections to a level dirt trail. Following a deep green fern forest floor, I connected in with Youth Camp Fire Road for a 4.5-mile loop. Surrounded by towering redwood trees, rich sage moss and tranquil creeks, the benefits of ‘forest bathing’ (the Japanese term for immersing oneself in nature) are calming and tangible.

For views of the ocean, try the 3.6-mile Ridge Trail Loop that begins from the main parking lot.  On a clear day, the Pacific Ocean cuts a stunning contrast to the towering forest framing the panoramic view. Take the Town Fire Road Trail to Ridge Fire Road and turn right. To complete the hike, connect in with the Forest Loop Trail, which leads you back under the canopy of towering redwoods to the trailhead.

For an alternate path from the parking lot, the noteworthy Heritage Grove Trail boasts some of the largest old-growth redwoods in the Santa Cruz Mountains. Follow it 1.6 miles to Heritage Grove and then loop back on Town Fire Road for a four-mile round trip. To top off your hike with some more local history, drop by Alice’s Restaurant a few miles up the road. Originally built in the 1920s as a general store, the now iconic dining spot was later turned into a restaurant and named after owner Alice Taylor and the famous Arlo Guthrie 1967 hit song.

In the heart of the Peninsula lies a jewel of pristine open space called Water Dog Lake Park, known for its dog-friendly trails, lake vistas and accessibility. Just minutes from Highway 92 and 280, hikers and mountain bikers flock here to enjoy a peaceful mountain setting hidden in an urban landscape.

The 100-million-gallon Water Dog Lake Reservoir has roots dating back to the early days of the Peninsula when affluent San Francisco families established “country” estates. In 1869, Bank of California founder William Ralston built Ralston Mansion, now home to Belmont’s Notre Dame De Namur School and University. To provide water to his estate, Ralston hired hundreds of laborers to dig Water Dog Lake Reservoir and build intricate piping to carry the water down to his property. During that era, the reservoir became the primary source of water for the new town of Belmont.

Water Dog Lake Park has two distinct trailheads and an abundance of routes that navigate this unique open space with expansive views. Joined by my Labrador Retriever, I parked at the trailhead on Lake Road in Belmont and studied the large map at the entrance. Choosing the left fork on Lake Loop Road Trail, we began bounding down the fire road. Descending the trail, I could see the Bay in full view and the wide fire road easily allows for companionable side-by-side hiking with friends (and/or) dogs. The lake soon emerged from the canyon below and we took the Berry Trail to the right and headed down to the deep blue reservoir. After exploring the lake shore, we followed the Lake Loop Trail around the lake and circled back the way we came for an easy 1.4-mile hike. For a longer hike, take the junction with the John Brooks Trail and access a network of miles of trails.