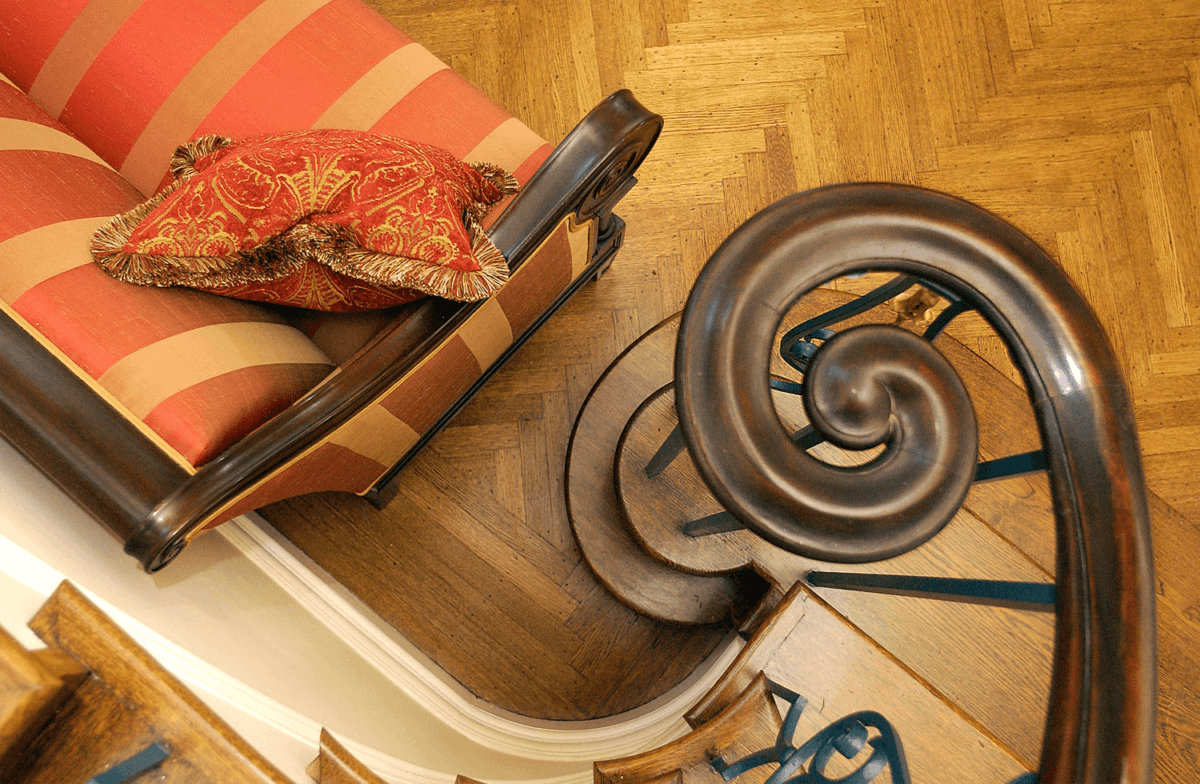 What’s the oldest object in the room? While certain treasures can remain in a family for generations, sometimes it’s the room itself that’s everlasting.

Like sparkling gems scattered across the Peninsula, captured in timeless grandiosity, historic estates hold court as preserved pillars of local culture. In sharp contrast with the modern and often mundane, they inspire us to marvel at their marble façades and elegant entryways.

These estates were products of a post-Gold Rush era when industrial titans of the day, with surnames like Stanford, Ralston and Crocker, cemented their legacies in country homes—often one-upping each other in size and grandeur.

Vestiges of a bygone era, some have been lost but others endure thanks to a newfound life and purpose. Presented here is a collection of the grand estates that have been reborn as schools, universities, clubs and gardens. Formerly exclusive enclaves, they invite us inside to celebrate their fascinating history and ageless beauty.

It’ll take more power than the shake of an earthquake to bring down the Douglass Mansion. Located on Valparaiso Avenue in Menlo Park, the grand white building is now part of the Menlo School campus, but it was originally the home of heiress Mary O’Brien Payne and her family. After the 1906 San Francisco earthquake, the Payne family hired renowned architect William Curlett to build a house on their property.

Construction of the home ended in 1914 and the finished product was a three-story concrete mansion with over 50 interior rooms, each filled with elaborate artwork and designs.

Fourteen years after the untimely death of her husband, Mary Payne sold the mansion and land to inventor Leon Douglass for $600,000, earning the estate its namesake.

In 1935, Douglass lost two of his daughters and subsequently moved to a more modest building on the property. Before the mansion was sold to Menlo School in 1945, the building served as a home for recovering patients from a nearby hospital during World War II.

When the Menlo School first took custody of the building, its use shifted drastically to benefit the school. “[Douglass] was the center of campus,” says Judge Len Edwards, Class of 1959. “It contained the administrators, dances, kids living there and a locker room in the basement.”

In 1989, the mansion was severely damaged during the Loma Prieta earthquake and the school board planned to demolish the structure. However, after much resistance from the community, they instead built a new wing that stabilized the building and contains the library now called the Stent Family Hall.

The Uplands Mansion, a prime example of the Beaux-Arts Classical style, is a symmetrical work of art. Its five-part composition emphasizes the central mass of the building that’s adorned in double columns, archways and linteled openings. It’s no wonder that the estate owes its origins to one of the “Big Four” builders of the Central Pacific Railroad.

In 1911, Charles Templeton Crocker (a scion of the Crocker railroad fortune) began construction—as a wedding present for his bride—decorating the mansion with materials sourced from around the world. The Carrara marble fireplaces are hand-carved while all the marble mantelpieces came from a Spanish castle from the 16th century.

The Italian Renaissance is reflected in the rose and Pomona green coloring on the wall coverings, remaining visible to this day, while a 16th-century, hand-carved ceiling embellishes the ballroom.

The estate’s 39 rooms, 12 bedrooms and 12 baths hosted countless soirees during the first half of the 20th century before the Crocker family sold it in 1942. It changed hands (including having Soviet Ambassador Andrei Gromyko as its occupant) before the trustees of the Crystal Springs School for Girls acquired the property and buildings in 1956.

Today, the mansion on a hill and ten surrounding acres serves as the focal point for a campus community of 350 students in grades six through twelve, producing an alumni of chess grandmasters and Rubik’s Cube aficionados.

What was once a gothic smoking room is now the head of school’s office while the ballroom, formerly an epicenter of song and dance, is currently used for quiet study.

The Crocker family’s Skyfarm Mansion is currently the center of Nueva School but the elegant manor changed hands several times before becoming the innovative education hub it is today.

In 1896, W. H. Crocker commissioned the creation of the Skyfarm Mansion as a wedding gift for his sister-in-law and her husband, calling it the Poniatowski House. The wood-frame building burned in 1928 while the family traveled in Europe. Crocker’s son William opted to design a new, fire-proof dwelling that used insulated steel to prevent another tragedy.

Resurrected in 1931, the current Skyfarm Mansion is an Italian-inspired marvel designed by San Francisco architect Arthur Brown, Jr. The star architect is noted for numerous Bay Area landmarks including San Francisco City Hall, Folger Estate in Woodside and the Hoover Tower at Stanford. (Coincidentally, he shares a name with a fellow prominent architect of the area, Arthur Page Brown.) The architecture celebrates the Georgian Revival Neo-Colonial style with a symmetrical façade, a hipped roof and rectangular windows featuring double-hung sashes.

The house was donated for use as the Nueva School, a pre-K through grade 12 private institution founded in 1967 by Karen Stone McCown. The Skyfarm Mansion, considered a central part of the Nueva experience, is the school’s historic heart.

It houses the pre-K through grade four classes, including a ballroom, kitchen and some administrative offices. Many concerts and other special events take place in the ballroom. The grounds around the mansion provide for a vegetable garden and fort building—exhibiting how some 125 years later, construction has never quite ceased on the premises.

That’s when he founded Bank of California and purchased a home in Belmont from a man a named Count Leonetto Cipriani. Ralston made his fortune in the development of the Comstock Lode (the first major discovery of silver ore in the United States), and he admired the Peninsula’s tranquil setting.

He quickly set out to create his own magnificent estate in Belmont and rise in the echelon of San Francisco’s high society.

It is believed that he commissioned the architect John Painter Gaynor, who later collaborated with Ralston on the Palace Hotel in San Francisco (several of the design elements of Ralston Hall Mansion were replicated in the design of the Palace).

Ralston expanded the house monumentally, adding 50 bedrooms and installing parquet floors of walnut, maple and mahogany. Perhaps inspired by his luck in the Nevada mines, he chose silver-plated doorknobs for the entire house.

The sprawling mansion featured a grand banquet hall, a Turkish bath and a ballroom with plate glass mirrors to emulate the Hall of Mirrors in Versailles.

Ralston drowned in 1875 and William Sharon took over his property and lived on the estate. The mansion then became a seminary for women and a mental hospital before becoming part of the Notre Dame de Namur University in 1922. The university was founded by two nuns who came from Namur, Belgium, to start schools on the West Coast.

For 92 years, the building housed administrative and faculty offices and served as a venue for a variety of university events. However, in 2012, due to safety concerns about the building’s ability to withstand another major earthquake, Ralston Hall Mansion was closed. Although a Save Ralston Hall campaign was launched, the seismic retrofitting and renovation project is currently on an “indefinite” hold.

Palo Alto was a little town of 3,000 when the Gamble family first arrived. The main house was built in 1902 and was originally home to Edwin Gamble, the son of the co-founder of consumer goods giant Procter & Gamble. The three-story house and carriage house were created by C. A. Bates, a San Jose contractor. Since the property was then outside the city limits, a special arrangement was made to have electricity extended to the premises.

In 1908, Walter A. Hoff designed the formal gardens. Over the years, more small buildings were added to the property and the house was enlarged. Elizabeth Frances Gamble, one of Edwin Gamble’s four children, returned home after college and discovered her passion for gardening. Upon her death in 1981, at age 92, Gamble left her house and garden to the City of Palo Alto. Since becoming a public property in 1985, the gardens have been completely restored, with paths, irrigation and lighting added. Along with structural repairs to the older buildings, newer additions include a gazebo, tool house and horticulture office.

Today, over 300 volunteers continue to care for the estate. Open daily during sunlight hours, visiting is free. The garden is closed for upkeep on Tuesday and Wednesday mornings from 8AM to 12PM.

Although never a private estate, the St. Patrick’s Seminary and University deserves inclusion for being an architectural triumph reflective of the era. In September 1898, five Sulpician priests and 34 aspiring priests gathered in Menlo Park to establish a school with the intent to “create courageous men of reflection and action who live joyous lives as priests.” Those 39 forefathers inaugurated St. Patrick’s Seminary, a preeminent seminary on the West Coast and the only institution of its kind west of the Rocky Mountains at the time.

The second archbishop of San Franciso, Archbishop Patrick William Riordan, established the seminary and named it in honor of Saint Patrick of Armagh, the Apostle of Ireland. The name was a token of gratitude for the Irish laypersons and clergy who helped to fund and support the seminary. Although not Catholic, Jane Stanford was a benefactor and built a pipeline to carry water from Stanford across Palo Alto and San Francisquito Creek to the seminary.

However, the 1906 earthquake leveled the Romanesque arcade. Under Devlin’s supervision, the building was reimagined with a third story added plus a mansard roof. The seminary now stands as a hybrid of styles, joining Romanesque and Second Empire architecture in a timeless and everlasting union. In its historic setting, more than 120 years after its founding, St. Patrick’s continues its charter to prepare men to become Roman Catholic priests.

The town of Hillsborough can essentially credit its incorporation to a country club. Several affluent early-day landowners established the still-active Burlingame Country Club in 1893 to attract real estate sales in the area that in turn, produced a population worthy of its own town.

The Club swiftly brought development of more estates and lavish country homes to the area. William Crocker commissioned a Second Renaissance Revival house he called “The Oaks” in 1895. This is just one of several homes that eventually were tucked into the Burlingame Country Club as clubhouses.

The architect behind one of the other clubhouses and bungalows was Arthur Page Brown, a renowned architect of the late 19th century who designed the Ferry Building in San Francisco and is credited with introducing the Mission Revival style to Santa Barbara. Brown died in 1896 due to injuries suffered in a runaway horse and buggy accident in Burlingame.

William H. Howard, a prominent landowner of modern-day Hillsborough and Burlingame, began selling off property in the 1890s. He sold his Uplands estate to Charles Frederick Crocker and then, in 1896, created Burlingame’s first subdivision. However, these lots failed to sell fast enough to prevent a foreclosure action with the Hibernia Bank, which was owned and operated by the Tobins, who were coincidentally fellow Burlingame Country Club members. Apparently, some disputes could not be settled on the golf course.